What Better Homes and Gardens Doesn't Want You To Know

Remember how last year, I wrote about camping and how I don't get it? I think this post is the sequel.

This past weekend was the first nice weather we have had in 2010. Actually, that's not entirely true - there have been some patches of decent weather, here and there. This was the first time such weather lasted longer than 10 minutes. It finally felt like Spring, which is about bloody time since the first day of Summer is about a week away.

Anyway, as if it wasn't glorious enough to have two solid days of sunshine, these two days WERE A WEEKEND. There was some serious rejoicing going on, and I'm sure we weren't the only ones.

I spent some of this marvellously beautiful weather doing something I've never really done before - gardening. And during my two and a half hours of kneeling in the dirt, I came to several realizations. Which I am now going to share with you. Aren't you lucky?

First of all, when people say they spent some time gardening, they mean weeding. What else could it be? Pointing a hose or watering can at the garden doesn't take any time at all - no one would think to mention that. And planting can only be done at certain times of the year, right? So if you ask someone what they did on the weekend and they say breezily, "Oh, I spent some time in the garden," they mean that they were pulling weeds. But gardening sounds so much fancier than weeding, which must be why they say that. Gardening sounds important and sort of Victorian. Weeding, any monkey can do. As evidenced by the fact that I, who know nothing whatsoever about gardening, can weed like a mo-fo.

My entire approach to weeding is as follows: I have not the slightest clue whatsoever of what I am doing, but I do it extremely thoroughly. This past weekend was my second experience with weeding. The first was three years ago when we moved into our house. Every once in a while, I will decide that it is stupid for me, a grown and intelligent woman, to not know how to do certain things. And I feel a surge of determination to learn. This happened when we bought our house - for the first time, I owned land. Dammit, I could TOTALLY have a garden! I spent several hours weeding the weird triangular patch of dirt adjoining our house. It took way longer than I thought it possibly could. And then, a week later, it looked exactly as if I had never touched it. I decided gardening wasn't really that important after all. Second revelation: gardening is something you have to do all the time. It's not a hobby, it's a lifestyle choice. No thank you.

Anyway, Chris persuaded me to weed the front garden, and I was so grateful to have an excuse to be out in the sun that I happily complied. I attacked the garden with my trademark thoroughness and the one gardening tool designed for adult use. (You may think I am joking when I tell you my two-year-old daughter owns more gardening tools than my husband and I put together. You would be wrong. She owns a full-size shovel and a rake, as well as a trowel and two other tools whose names I don't even know. She also has her own pair of gardening gloves. And I am not even counting the watering cans. I own a trowel and gloves.) 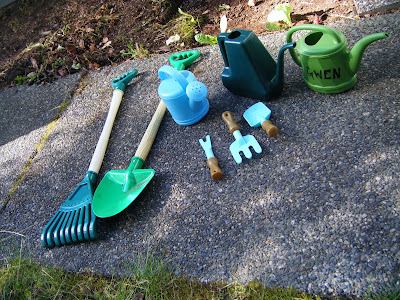 I dug and weeded and ... man, gardening is so dull you can't even come up with a third verb for what I did during those hours. That's my third revelation about gardening. Supposedly, there are people out there who LOVE gardening (weeding). That's ... you guys, that's just really weird. Gardening is boring and you get filthy dirty and there are bugs and as soon as you start, you can't ever stop or else the weeds take over again and all your efforts soon become invisible. So the people who claim to love it must have been brainwashed into lying about it. Just like the women who claim that breastfeeding was perfectly straightforward, easy, and filled them with a sense of utter maternal bliss.

Because I was feeling no sense of reward or enjoyment from the gardening (WEEDING) itself, I began to crave external reward. Chris must have known this, because he wandered by every half-hour or so to tell me what a good job I was doing. This is my fourth revelation about gardening, as it relates to me: If I'm going to do it, I better be getting a lot of recognition for it. I better be getting the Pulitzer Prize of Weeding. I'm working on my acceptance speech now.

The fifth and final revelation about gardening grew gradually out of my time in the dirt, and I think this revelation is more to do with me and why gardening is Not My Thing. Gardening isn't really a hobby: you can't choose when to do it or not to do it, but have to jump-to when the weather conditions demand it. Weather being a fickle bitch, you never know how that's going to play out. Gardening isn't really a chore the same way other chores are, either: the more gardening you do, the more you have to do, and there's no way to know when you're done, and no actual real-life reason to do it. Example: there is a real-life requirement for me to wear clothes to my job, therefore laundry is a valid chore. There is no real-life need for me to arbitrarily kill a certain percentage of the green things growing in my garden. No one cares.

(And by the way, does anyone else find it odd that there is this completely arbitrary set of rules for what is a weed - and must therefore be sought out and destroyed - and what is a plant - and must therefore be nurtured and nourished? And that all the things that are hardy and designed to survive fall in the first category, while the second category is full of things that are fragile and easy to kill? How freakin Victorian is THAT? Seriously, I can't be the only one to have noticed this.)

(Just ask yourself: what's the difference between a weed and a wildflower? Really?)

At the end of the day, however, the garden was thoroughly weeded and I do have to admit it looked pretty good. I'm going to make sure to go outside and enjoy the weed-free look every day for the next week, which is about how long I think it will take for the weeds to take over and make it look like a jungle again. In the meantime, I don't think I'll be turning into a master gardener any time soon. If I really feel the need to involve myself in a task that involves getting covered in filth and feeling confused about what to nurture and what to squelch, all with the knowledge that the job is never really done and will probably not be noticed by anyone for a long, long, LONG time - hey, there's always parenting.
Posted by adequatemom at 8:34 AM

I kinda like weeding (and I call it that, because you're right, that's all there is!) What I like about it is the sheer destruction of pulling up all that greenery. I guess I like death?! If it is a menial task, Steve usually gives it to me because for reasons I can't explain, I get great pleasure out of accomplishing something like that.

Although I only weed when I feel like it, so most of the time my "garden" is a complete disaster.

Yes, I too totally get your post. I have never understood folks who like to "garden". That said, I very very much enjoy raiding the garden of my semi-adopted-mother-in-law (Sandy's mom's garden in PR) and then cooking and eating what I find in it.

So while I do not have the desire or stamina to make a real garden, I would love to grow my own food, that would be a sense of accomplishment.

I have started weeding the garden that our landlord put in front of our house (our lawn is entirely weeds, btw, so the garden is a bit haphazard) and I agree with Amberism. I started to enjoy pulling these huge weeds out. I started talking to them like "Oh yeah, you think you're so tough. How you like that!". Keep in mind that it's over 30deg C here and 100% humid every day so the weeds literally grow a foot in a few days. But once I got them all out I was very pleased with myself. Then I had to get in the pool because I was about to die of heatstroke.

Oh, and there's a *bit* more to gardening I guess: you could put down fertilizer, spray plant food or poison/deterrants, kill vermins, replace dead plants or add to the garden with new ones (the planting period here is longer than up north I think), fiddle with hoses and timers and buy shit at home depot as well as manual watering and weeding. But these are guesses cause i'm not a gardener :)

Both of these were really funny posts. My favourite line was about the pioneers thinking we have mental illness.
Very witty, and sadly true. :)

You fail to consider the act of food gardening. I can agree that gardening for the sake of deciding which are weeds and which are flowers is arbitrary and somewhat thankless. Food gardening is not just weeding, not arbitrary (food = good) and your produce is the most fabulous reward. Maybe try growing some radishes with Gwen next year, I bet she would love it.