Because I am so blatantly, inarguably awesome, a full month has passed since Amber asked me to take a picture of the fairy house she made for Gwen's birthday. 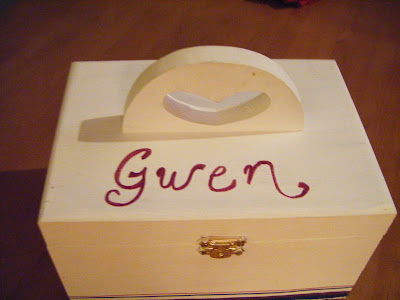 PERSONALIZED AND EVERYTHING, YOU GUYS. 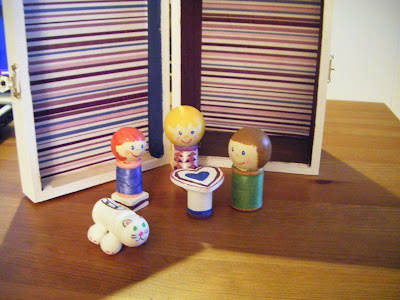 In case you would like to hear some of my litany of excuses, I include them for your enjoyment!

First of all, I was all set to take the picture, but I couldn't find one of the pieces. In fact, three weeks later I have no idea where it is. (It's the piece that's meant to go on one side of the box's lid, to make it look like a floor. It's never stayed on properly, and in fact I didn't even know what it was until I saw Amber's post with pictures of the other houses she's created.) 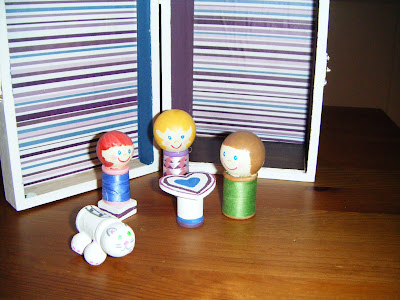 So that's why the left-hand side of the house doesn't have a dark floor. Because it's lost. What kind of people lose their floor? Unlucky fairy people, that's who.
EDIT: I totally found the missing floor this afternoon during the pre-dinner tidy-up. Insert sounds of frustration here! 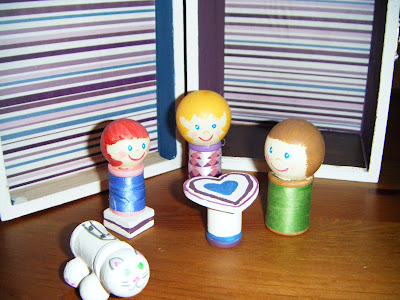 This house is adorable. As you can see, it includes three people and an incredibly charming cat. It also includes a heart-shaped table and three ... um ... things. (These pictures only show two "things" because ... wait for it ... I don't know where the other one is. OF COURSE!.)
So, in the photos above, I am assuming the "things" are cushions for the happy fairy people (they are relentlessly cheerful, no?) to sit around their quaint little table and admire its colourful design. But the "things" also kind of look like sandwiches, so maybe ... 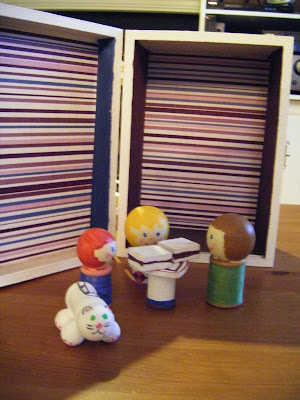 ..maybe they are meant to be lunch? I don't know. The cat looks pretty stressed in this picture, though, doesn't it? It's as if it KNOWS there aren't enough sandwiches to be shared with a feline friend, and no cute kitty kibble to be found either. Poor puss.
(Okay, so now I am anthropomorphizing a WOODEN cat. It's no wonder I can't keep track of Gwen's toys, with this kind of mental state.)
Posted by adequatemom at 9:42 AM

That brought me no end of joy! Both my sister and I were killing ourselves laughing.

The "things" are cushions. or chairs. or whatever the kids make of them, they're of Callum's creation, I think they're suppose to be chairs?

Those damn floors. I used them in the big dollhouse and they were awesome, but not so awesome in the boxes! Should have painted the damn floors!

Thank you, thank you for the pics! And the laughs!