Dear Gwen,
Today you are eighty-six months old! As your parents and grandparents comment to each other constantly, there is no more "little kid" about you at all. You are a big kid, and being a big kid is awesome! 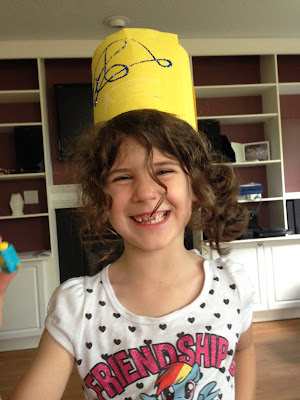 Let's start with your reading. You are fully unstoppable as far as the written word is concerned. Pretty much anything that you can get your eyes on, you will read. And you would rather read than do just about anything else - which means that you sometimes come home from school with uncompleted classwork, because you chose to read books instead of completing your math sheets. You will still often choose electronics over reading while at home, but it is clear that having so many electronic distractions (tv, laptops, iPad, iPhone, LeapPad, DS) has not prevented you from learning to read and from LOVING to read, which makes your Dad and I very, VERY happy. Hooray for literacy! Your favourite thing to read is still storybooks - you prefer these to chapter books, even though the plots are less interesting, because you still love to look at colour pictures as you read, and chapter books' illustrations are less plentiful and very rarely in colour. You've also started to enjoy some comic books thanks to Free Comic Book Day, such as SpongeBob SquarePants and Teen Titans, and your beloved Chirp subscription has now morphed into a Chickadee subscription, which you adore. Reading offers so many fun options! 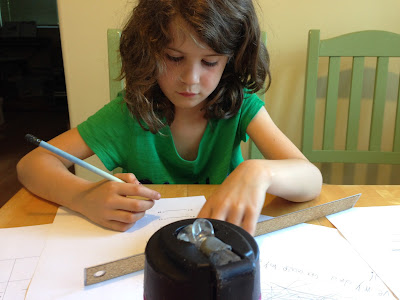 Your math brain isn't too shabby either. Last week you asked me, "Is infinity an odd number or an even number?" I don't think anyone knows the answer to that one, but I think it's really neat that you ponder such things!

A few weeks ago you and I made cookies. This is not a rare occurrence at all: you and I have been baking since you were under two years old. But this time, you did everything yourself: from reading and following the recipe to seeking out and measuring the ingredients, all I did was supervise (well, and handle the oven part, because there are some things Mom is not ready to let you do). Baking, I believe, has helped you a great deal to understand math concepts like fractions and multiplying. Figuring out that 1/2 cup and 1/4 cup of flour equal the 3/4 cup that the recipe calls for, or that 3 rows of four cookies on a baking sheet makes 12 cookies, is a really lovely and delicious way to learn math. A few days ago, for Father's Day, we made an apple crisp for dessert, and you did at least as much work as I did for that recipe as well - including dicing the apples for the filling. Yes, Mom let you handle a knife in the kitchen (though it did make me nervous, you did a great job!).

Real Life update: As of this writing, our house is officially sold and we are poised to move into a new (BRAND NEW IN FACT) house at the end of next month. This is super exciting for all of us, and you have been a champ so far in dealing with all the changes. When I look back on the first half of 2015, there hasn't been much going on that is not about this process: we did a lot of planning to figure out what we needed to do to our house in order to get it ready to sell; we did a bunch of work to make that happen, including uprooting every piece of furniture in our house so that we could replace every inch of flooring in our house; we sold outright or packed and stored about two-thirds of the contents of our house, including many things - playhouse, kiddie pool, sandbox, and more - that belonged to you; and then we actually put the place on the market and lived the chaos that is Constant Showings and Interruptions to Our Lives, all while working our butts off to keep our house and yard completely immaculate. I won't say that you were a glowing ray of sunshine through every difficult step of this process, or that you greeted every change with a smile and a song of joy, but honestly? You handled it all way better than we had a right to expect, and I feel so grateful for that. Does it help that you know damn well you are getting a trampoline AND a bunk bed once we move to the new house? Well, it sure doesn't hurt! 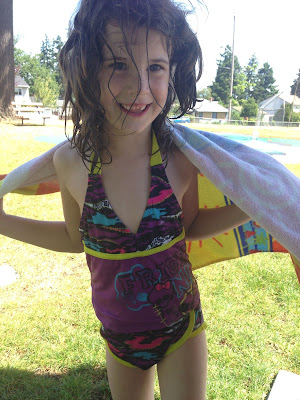 In addition to a new house, you'll be starting Grade Two in a new school, one that is a mere 850 meters away from our front door. I'm sure you'll be wanting to walk or bike to school in no time. I'm excited that our new neighbourhood is full of families (all of whose kids will be going to that same school), and figure that as The Kid With The Trampoline you will be able to make friends pretty quick. Your amazing support teacher Miss Kelly arranged for you and I to have a tour of the school together last week, where we also got to meet your new support teacher, who seems equally amazing. The school is lovely, and I think it will be a really good fit for you. So many exciting changes to look forward to! 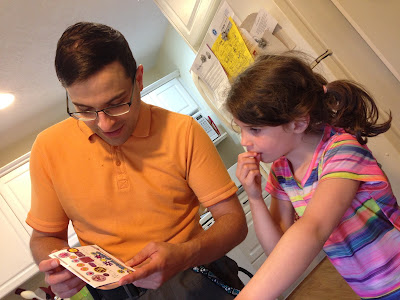 Naturally, there are sad and scary parts about these changes too. You are sad about the friends you'll no longer see at your school, or at your after school club. I bought you a simple coil notebook and called it your "Keep in Touch" book, which you bring to school and after school club each day to collect friends' names and phone numbers. Just because you don't go to the same school doesn't mean you can't stay friends. 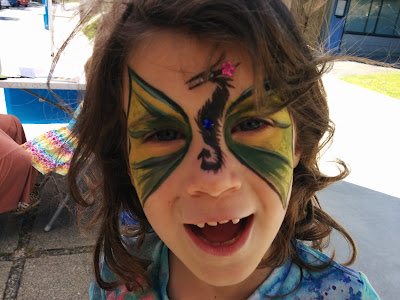 Here's an amazing thing. At seven years old, yes, you still wear a Pull-up to bed. We tried night-training you when we first toilet-trained you at 2.5 years old, but you are a ferociously deep sleeper, and the effort needed to get you out of bed to use the toilet when you were in a deep sleep was enormous, and enormously painful. You were SO miserable! So we soon gave that up, put you back in the Pull-ups, and .... then nearly five years passed. Most of the time, you wake up dry, but sometimes you don't. And although from time to time I would feel concerned or guilty about this, everything I read, or heard through discussion with other parents, indicated that night wetting was still totally normal until the age of eight. So I resigned myself to putting out that monthly cash for Pull-ups, and carried on.

Until one night, a couple of weeks ago, when you abruptly announced when getting ready for bed, "I'm seven. I'm a big girl. I don't need to wear Pull-ups anymore."

And off you went to bed with your underwear on.

And you woke up DRY.

I'd love to end the story with, "And you never wore Pull-ups again!" but that isn't the case. You went without for a couple of nights, then put them on again for a couple of nights, and now it seems that you'd like to just decide, night by night, whether you want one or not. I've even asked you how you decide, but you replied that you had no idea. I'm not honestly sure how to respond - it seems like if I praised you like crazy, it might make you feel ashamed or worried if you decided you wanted to wear a Pull-up for one night (or more), so I'm mostly keeping it low-key, while inside I'm exuberantly proud of you and very excited for the possible end of this era MAYBE coming into sight. Either way, it's pretty cool that you just made the decision by yourself: "I'm seven. I'm a big girl." You really are! 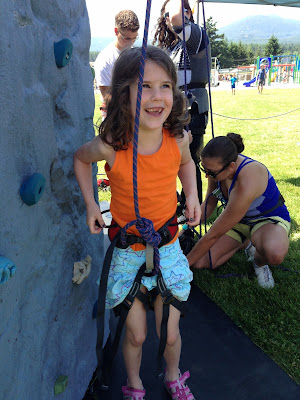 Other than selling/buying a house, this time of year is always full of lots of activities. There was your piano recital, where you played (and sang!) "Tchaikovsky's Waltz" and "Chim-Chim-Cheree". You had your gymnastics fun meet, where you did routines on the floor, vault, bar, and balance beam, and got a medal. We wrapped up the commercial you participated in at VIU to encourage participation in the Canada Learning Bond - holy crap, that one ended up cute!! And now, we've reached the last day of school, so we're kicking summer vacation off with a bang - a trip to the Lower Mainland to visit Playland and Science World this weekend. This is our only family vacation time this summer, so we're going to make it count - the rest of our (grownup) vacation time will be dealing with the move, while you're at summer daycamp having fun. This summer will also see your first time participating in Grandkids University at VIU! 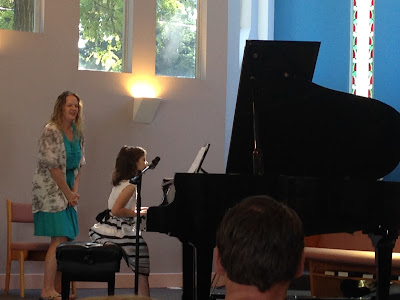 Recently, I had to pick you up from school to take you to a doctor's appointment, and then take you back to school. As we left the doctor's office, I was in my typical hurry, wanting to get you back to school and then myself back to work. You, however, were starting to fray. I suddenly realized that in the hour you'd been away from school, you had missed your morning snacktime, and there was no way you were going to make it to lunchtime without an intervention. "Gwen!" I said animatedly. "Do you know what you get when you mix 'angry' and 'hungry'? You get HANGRY! And that's what you are right now!" You burst out laughing, which was my intent, and then I took you to Timmy's for a bagel to tide you over. You got to learn a new word AND a hangry crisis was derailed! Win-win!

Last weekend, we at last went to see the new Pixar movie "Inside Out". I say 'at last' because even though we saw it on opening weekend, you have been obsessing about this movie for a few months now, ever since you saw the trailer. This marks the first time you have anticipated a movie's release, and counted down the days until you could see it. These months of obsession included requesting a book from the library about the movie, so you could read and learn all about it before we even saw it. You also talked about the movie often, quoted from the trailer, and pondered whether the characters would be at Disneyland next time you went there. I was looking forward to the movie as well, and couldn't help but think that this movie - which features the personification of a young girl's emotions Joy, Sadness, Fear, Anger, and Disgust - was awfully appealing to you, as a girl whose emotions are often powerful and out of your control.

The movie was, as expected, amazing. My prediction before the movie was that I would cry at least three times (animated movies are deadly!), but this prediction quickly became meaningless when in fact I spent a good two-thirds of the movie desperately choking back the sobs. My chest hurt for days afterwards. Even YOU cried at a very touching scene featuring the end of an imaginary friend. OUCH, Pixar! Anyway, I was very impressed with the portrayal of mental health/illness and the effects of depression on children. I'm excited that this movie could provide a great conversation starter for families to discuss these issues in an accessible way. But more importantly, you thought it was AWESOME. 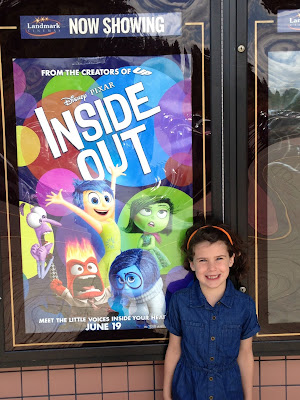 Well, I guess that's it for this month, Gwen. As always, we love you a million, billion, kajillion and SEVEN, and are so excited to embark on the next month's worth of adventures with you. 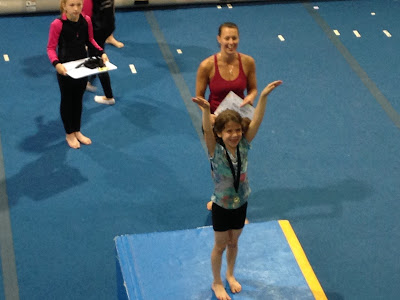