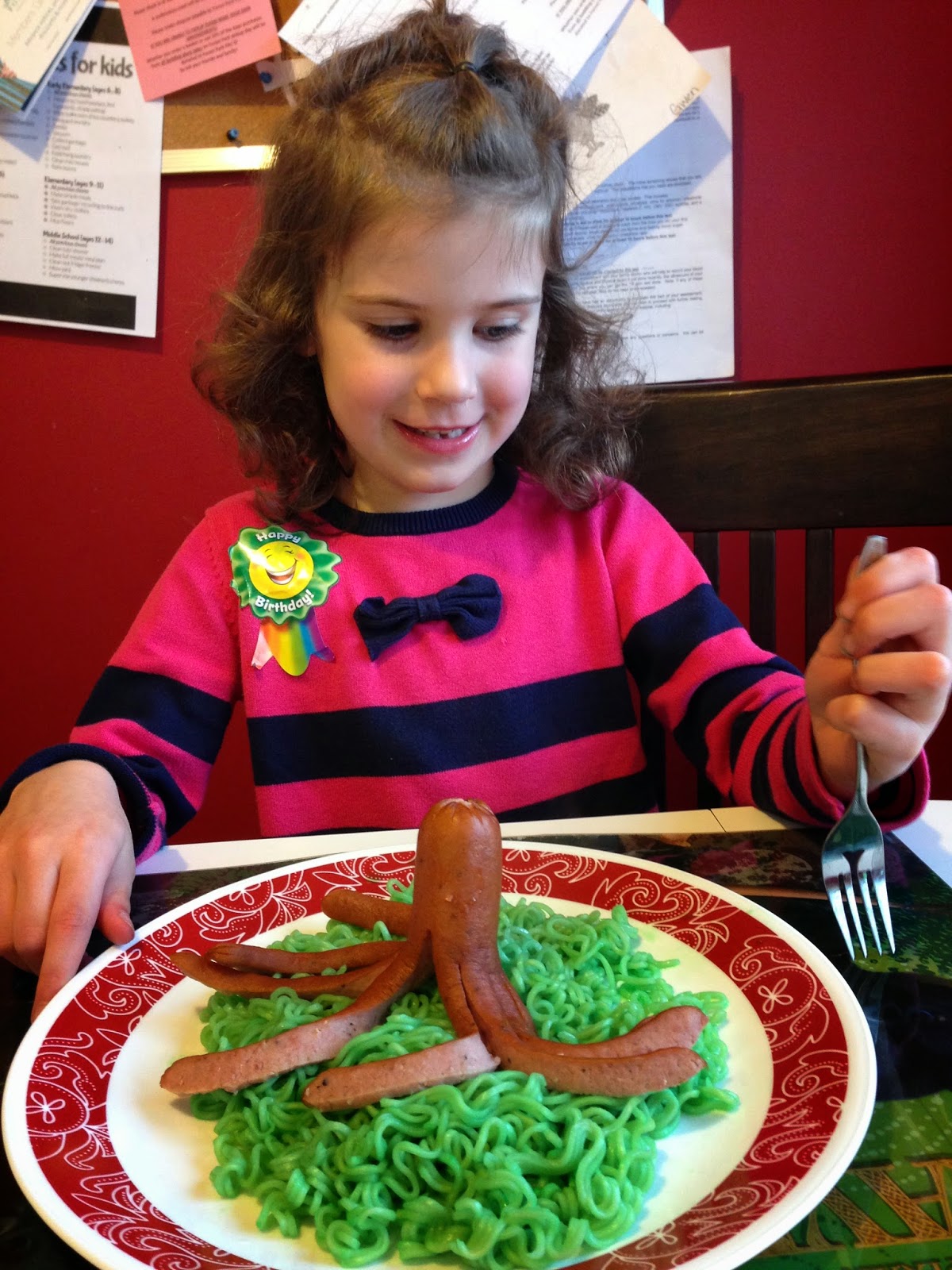 You are growing up and learning so many new things. Your reading skills continue to improve at a rapid rate, and you are also learning to tell time; you told me recently that you had the wrong kind of clock in your room (a digital clock) and that you didn’t know how to read it, so I added an analog clock to your wall as well. So far, you know what the minute and hour hands do, and can identify “o’clock” and “thirty”. Pretty cool! 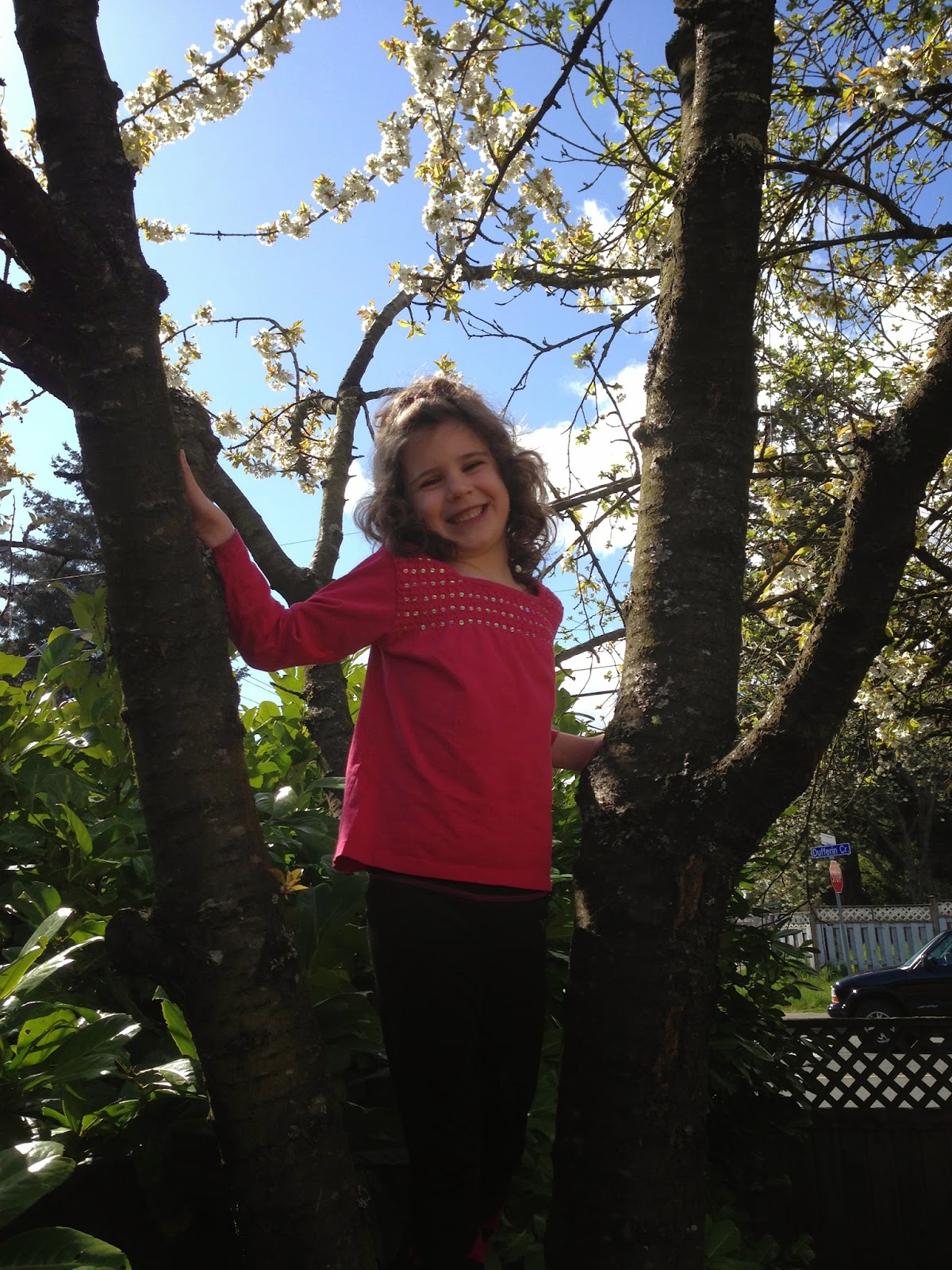 You have been telling us lots of stories about your kindergarten experiences lately, including the big spring event which was the addition of an incubator and several chicken, duck and goose eggs to your classroom. You were pretty excited when the eggs started to hatch – and a couple of days ago, you even got to hold a chick! Kindergarten sure is neat. 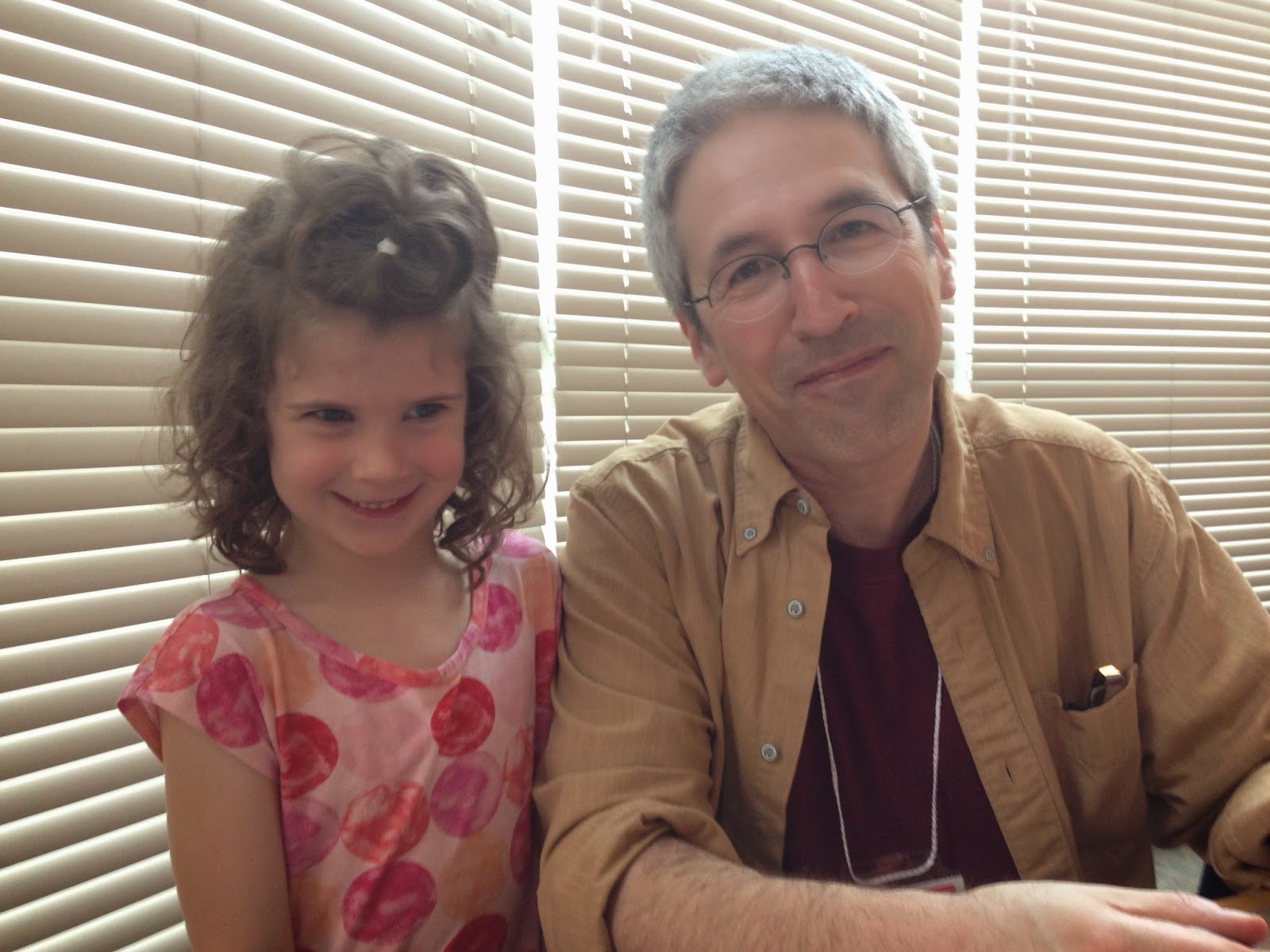 On the other hand, some sad things have happened at kindergarten too. The day before your birthday, we discovered that you had taken a toy from your classroom and put it in your backpack. After questioning, two different stories emerged: one, that you had been playing with the toys and with your purse, which you had taken for show and tell that day, and forgot the toys were in your purse when you put it in your backpack; the other, that you had thought the toys would be fun to play with at home, so you consciously chose to take them from your classroom. Whatever the truth might be, we needed to make it very clear to you that stealing was a BIG no-no in our family, and we came down on you hard. I couldn’t believe that after having our car broken into, and then our house broken into, and how awful it was to have so much stolen from us, you would steal from someone else. We decided to have you write a letter of apology to your teacher and, of course, return the toys to your class. Hopefully you have learned your lesson! 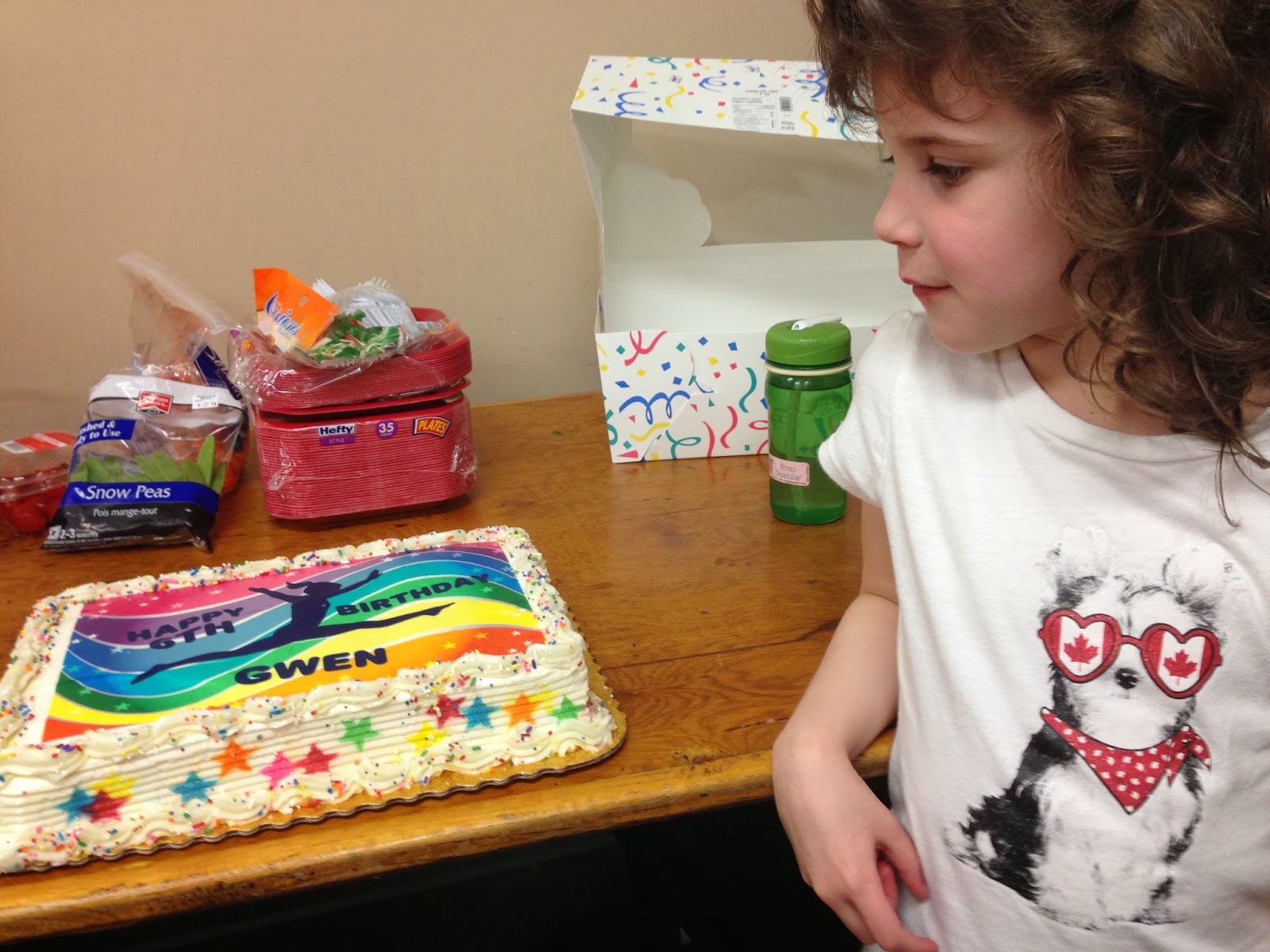 And more recently, just a week ago, you came home from school in a shirt that was different from the one you’d worn to school. I’d sent you in a really lovely sleeveless plaid button-down shirt in bright spring colours – no doubt a birthday gift from your grandparents. So why were you wearing a cast-off t-shirt from the lost and found when you got home? Because at recess you’d gotten really hot and taken off your shirt, and your teacher decided something without buttons might be less tempting and more likely to stay on your back. This incident did cause me to reflect on how casual we are about nudity at home – and have a talk with you about the fact that it’s not okay to do that outside our house. But mostly it made me laugh! 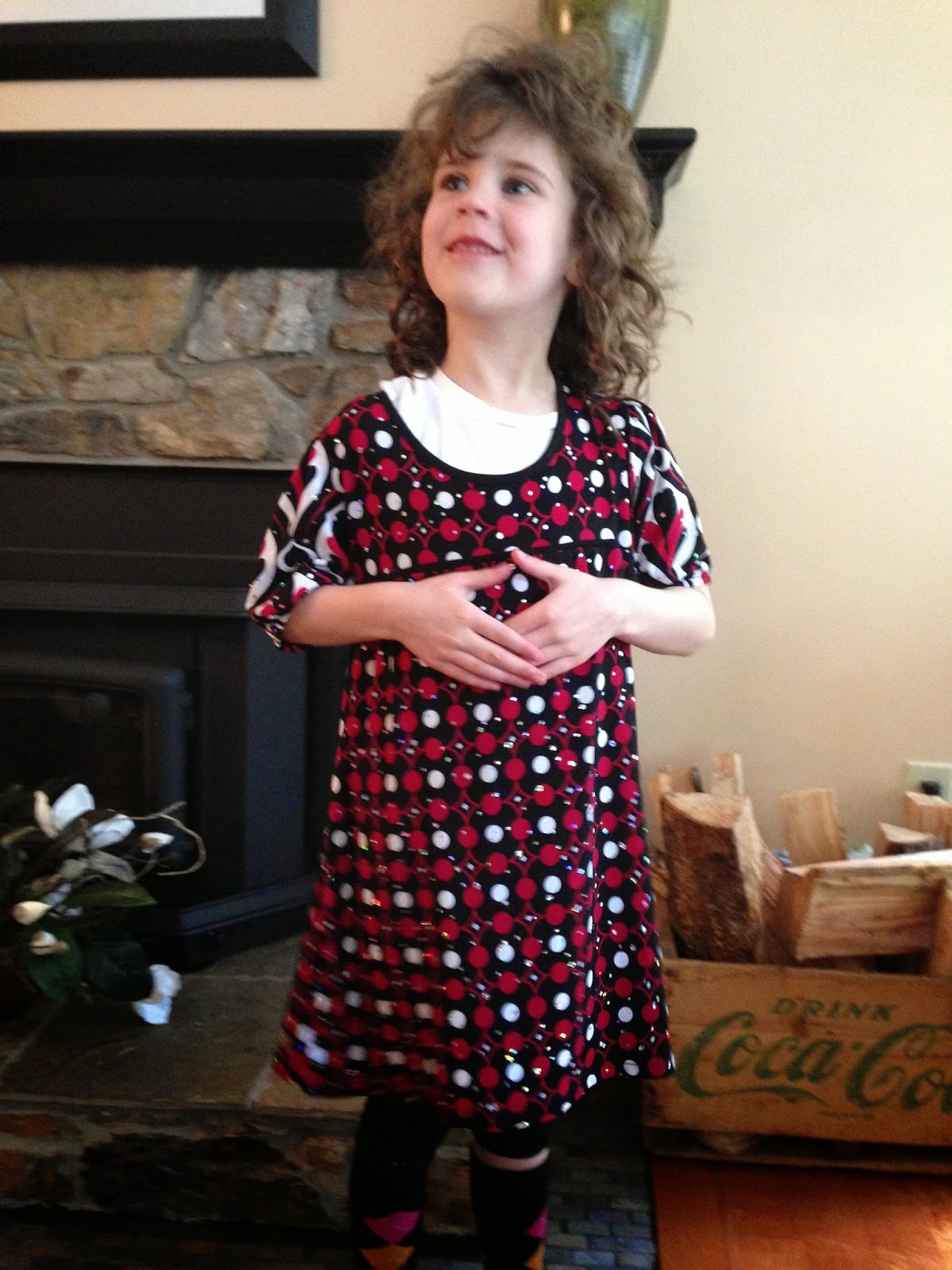 For the most part, you are not too fussy about your clothes. I generally pick out your outfits for you, but this is not because I don’t trust your taste – it’s because you are vehemently NOT a morning person, and if I require you to make decisions about your clothes on top of everything else you need to get done in the mornings, it would probably break you. (Or at the very least, make us all late for work and school.) So, I choose your clothes, and most days I physically help you get dressed, just so that process doesn’t take forty-five minutes. There is one clothing decision that you end up making for yourself in the mornings, and it is pretty much guaranteed to be the most nightmarish part of our day: the choosing of the shoes.

If there is a way to choose inappropriate footwear, you will do it. If it’s sunny, you want rainboots. If it’s cold out, you want dress shoes. And lately, all you want, every day, no matter what the weather or the activity you are heading to, you want to wear these ridiculous gel sandals that really, are wrong for everything. And every single day when you choose the most awful, inappropriate shoes possible, and we try to redirect your decision, you argue and fight and whine and throw a fit and burst into tears and insist that we never let you do anything you want to do. It doesn’t matter how calmly we explain to you that your feet will be way too hot in rainboots; that your dress shoes will get ruined on the playground; or that your stupid awful pointless gel sandals will be filled with sand the moment you step outside; you are outraged that we are curbing your freedom in this way. OUTRAGED! 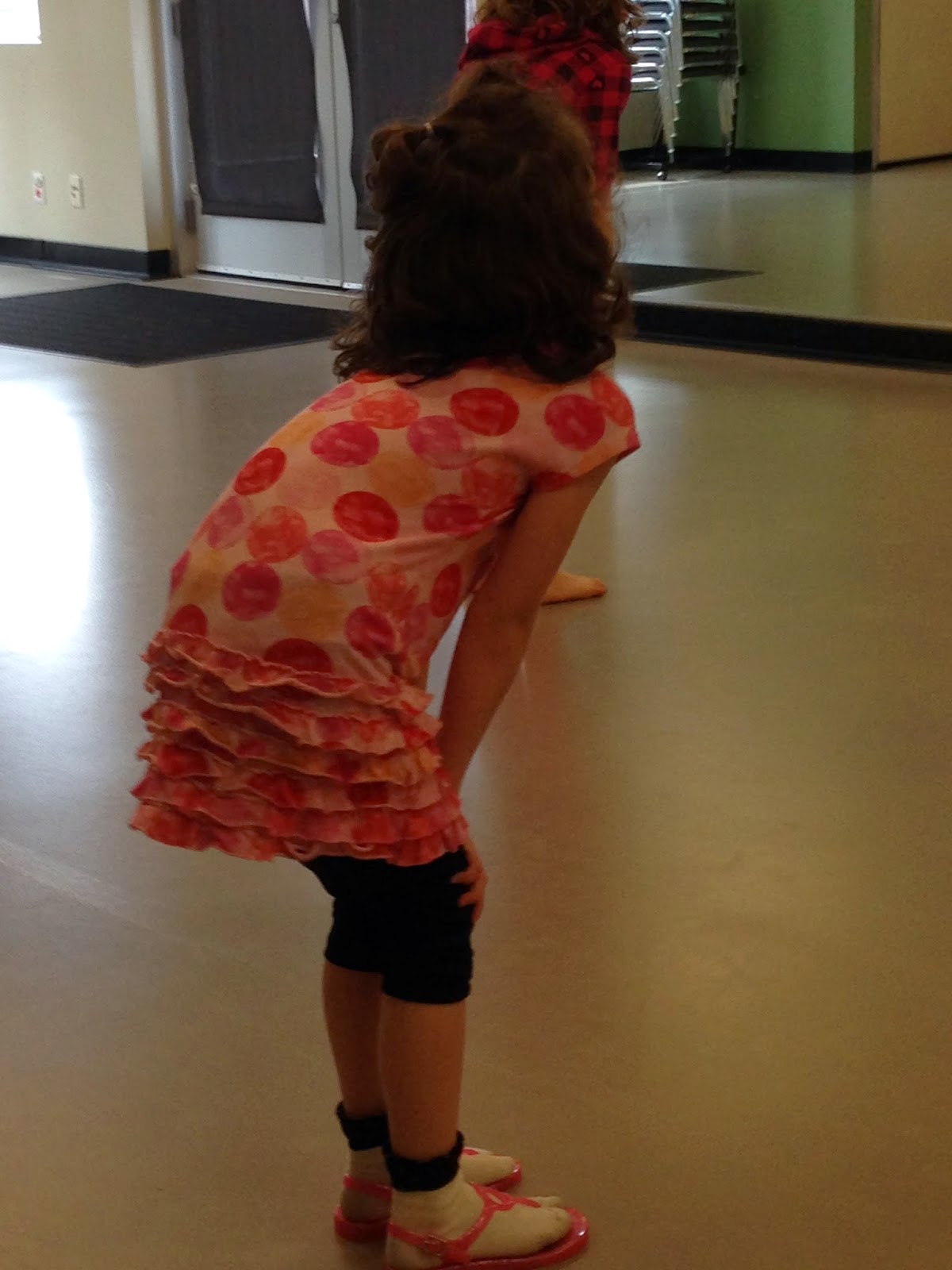 (We may have hidden those shoes while you were at school one day. I just don’t like having that much drama so early in the morning. EVERY morning.) 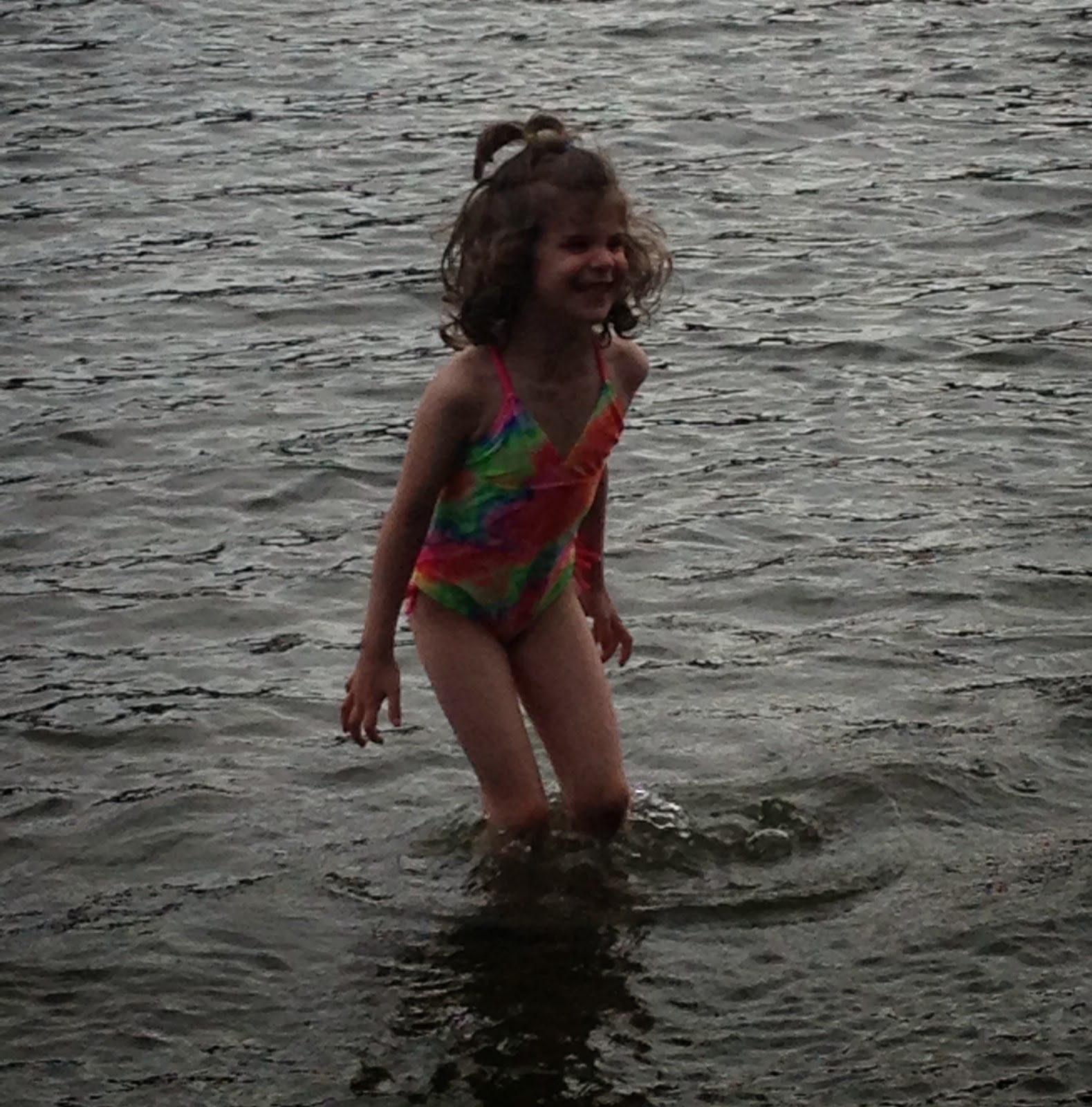 You had a start of your fifteen minutes of fame this month, with your photograph appearing in the local paper. You and your dad went to the RCMP detachment open house a few weeks ago: you had a tour of the police station, got fingerprinted by the forensics team, tried on a riot officer’s helmet, watched dad try to walk the straight line with drunk goggles on, sat in a police cruiser, and even held a SWAT officer’s gun. It was your turn on the police motorbike that got the photographer’s attention, though! The event got rave reviews from both you and Dad. 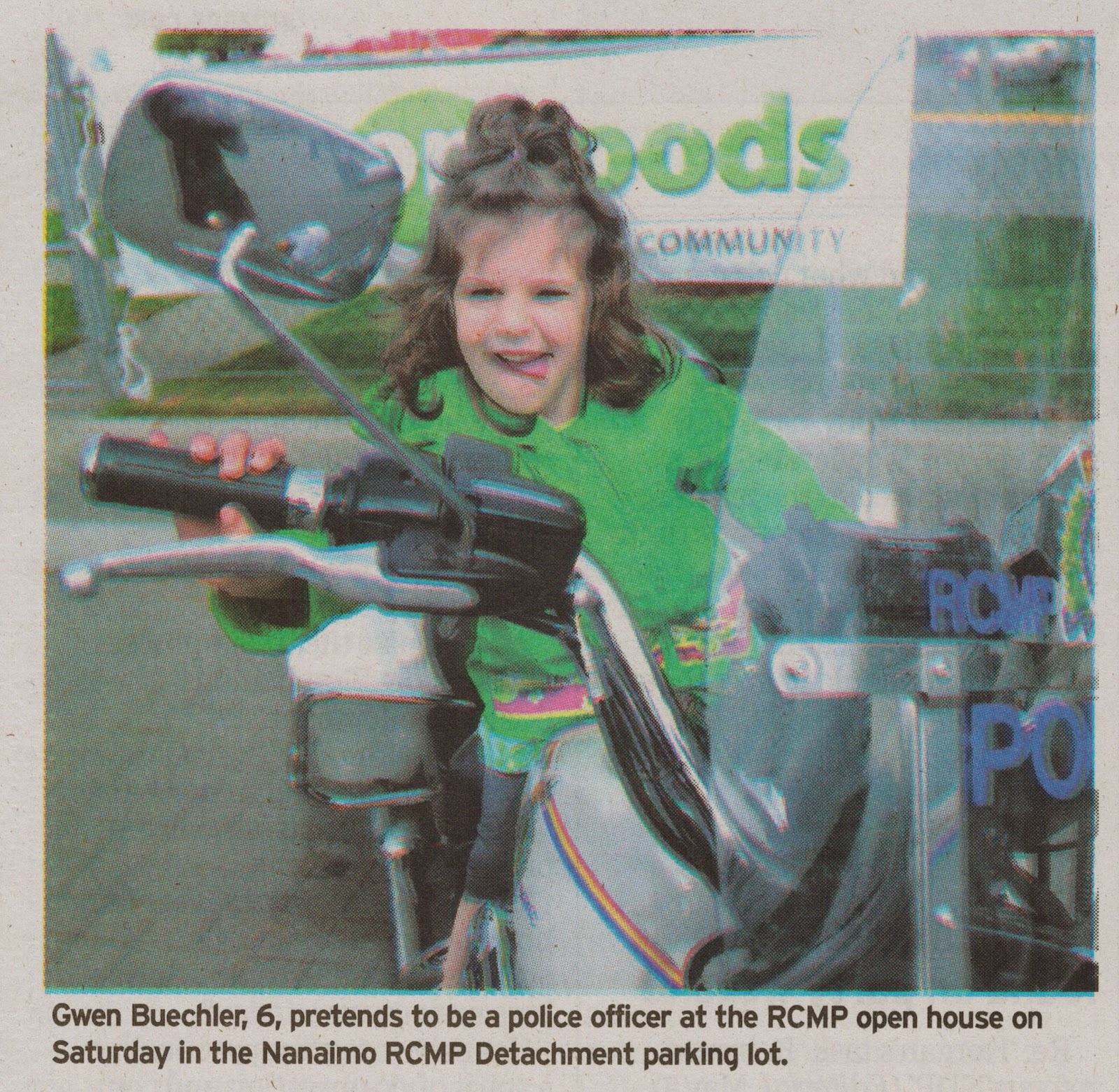 Later that same day, I took you to another event: a Rainbow Loom meet-up at the local Michael’s store. You’ve become enthralled with the Rainbow Loom, like most kids between 5 and 12 these days, and you’ve been wanting to go to a meet-up for a while. I wasn’t sure how it was going to work: the meet-up was for two hours, but surely you couldn’t sit with a group of unknown kids and play with rubber bands for that length of time, could you? Well, as it turns out … other than a brief snack break, yes you could, you can, and you did. You sure love your Rainbow Loom! 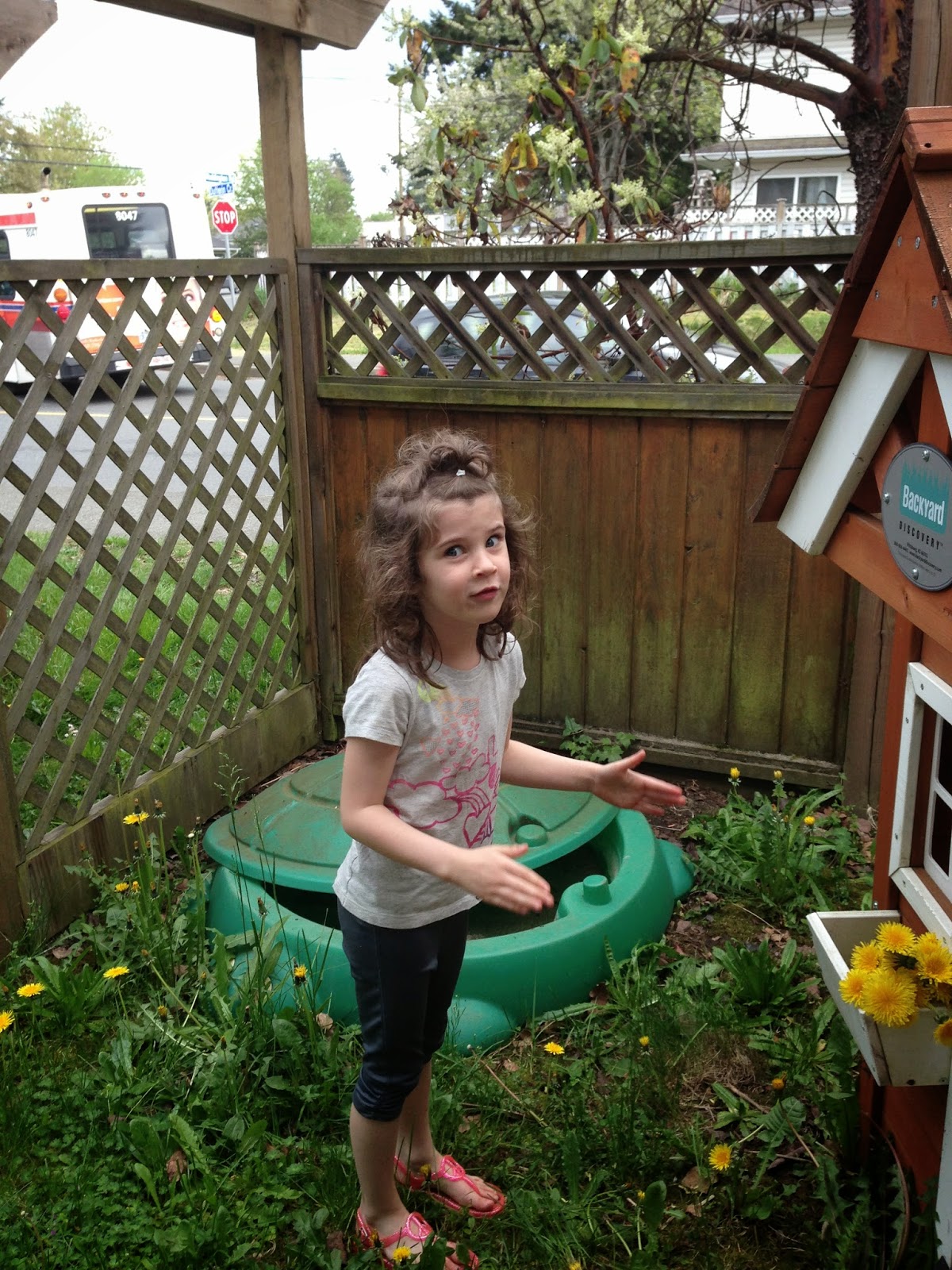 Speaking of your boundless creativity, the other crafty gift you got for your birthday was a pottery wheel. Your first impulse was to make a small bowl for your beloved kindergarten teacher, which you gave to her after bringing it for Show and Tell. I think she was touched by this: she sent home a thank you card calling you a very thoughtful girl, and a true artist. 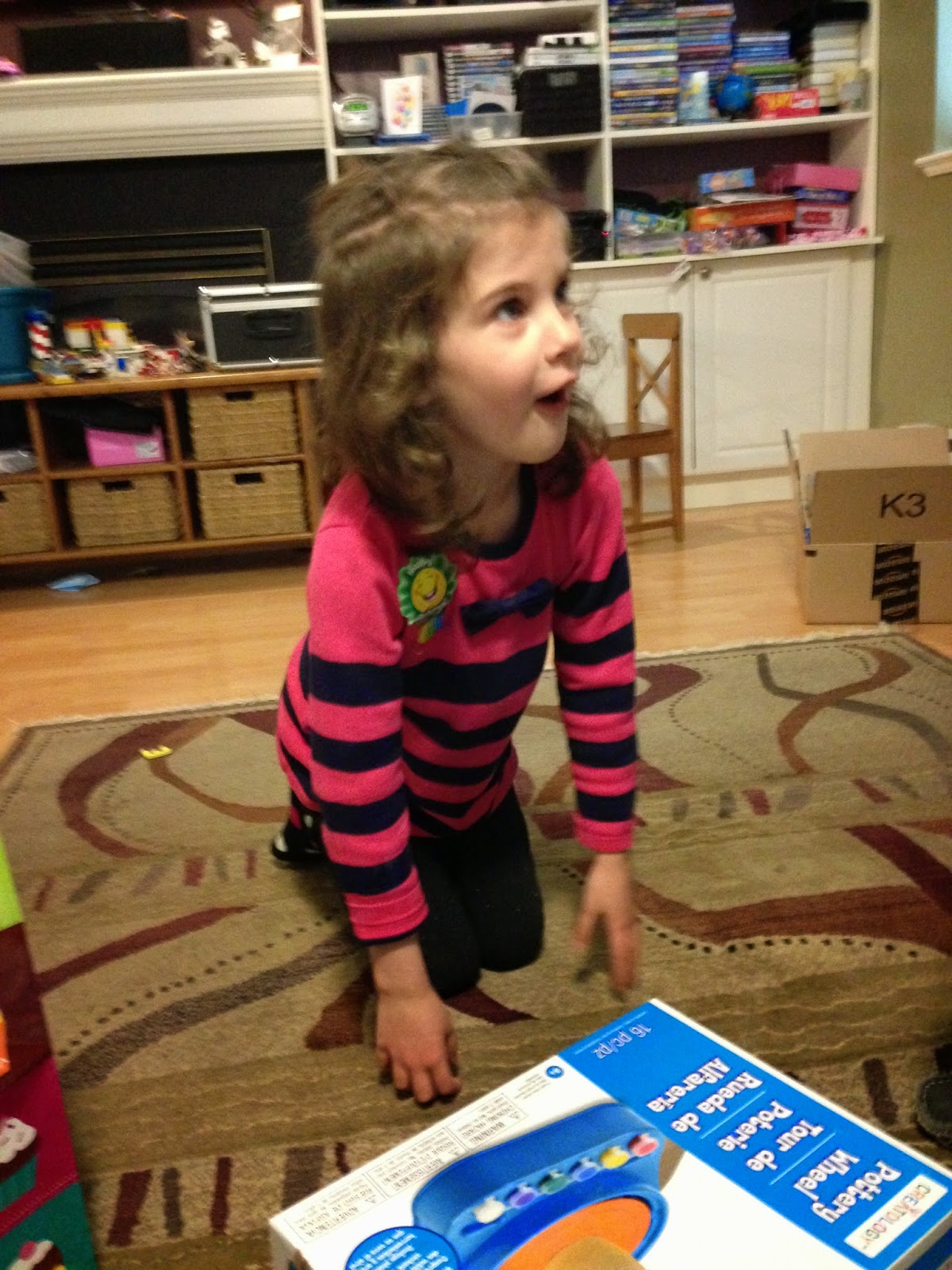 That's it for this month, my girl. I'm looking forward to a summer of adventure with you! 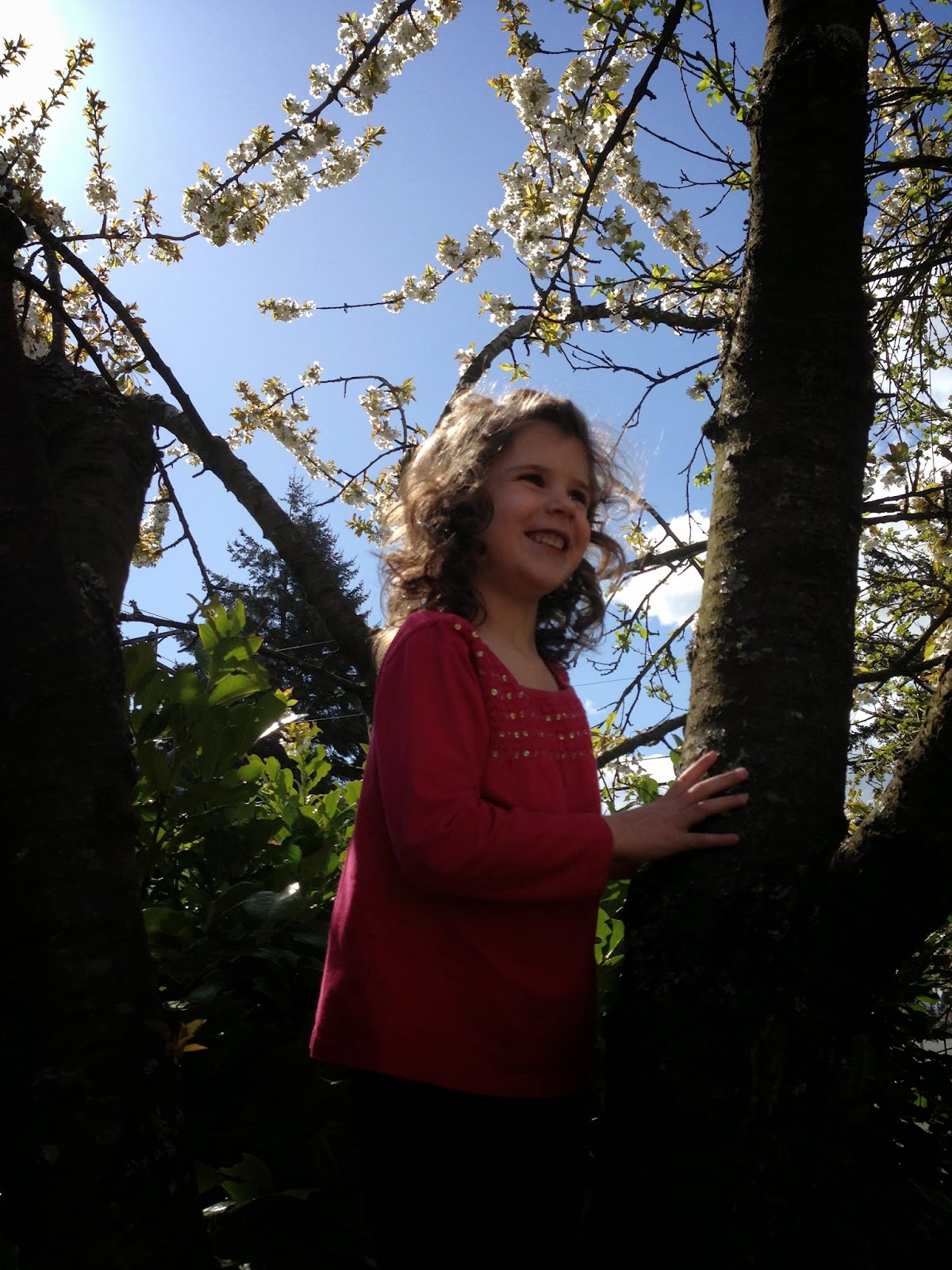 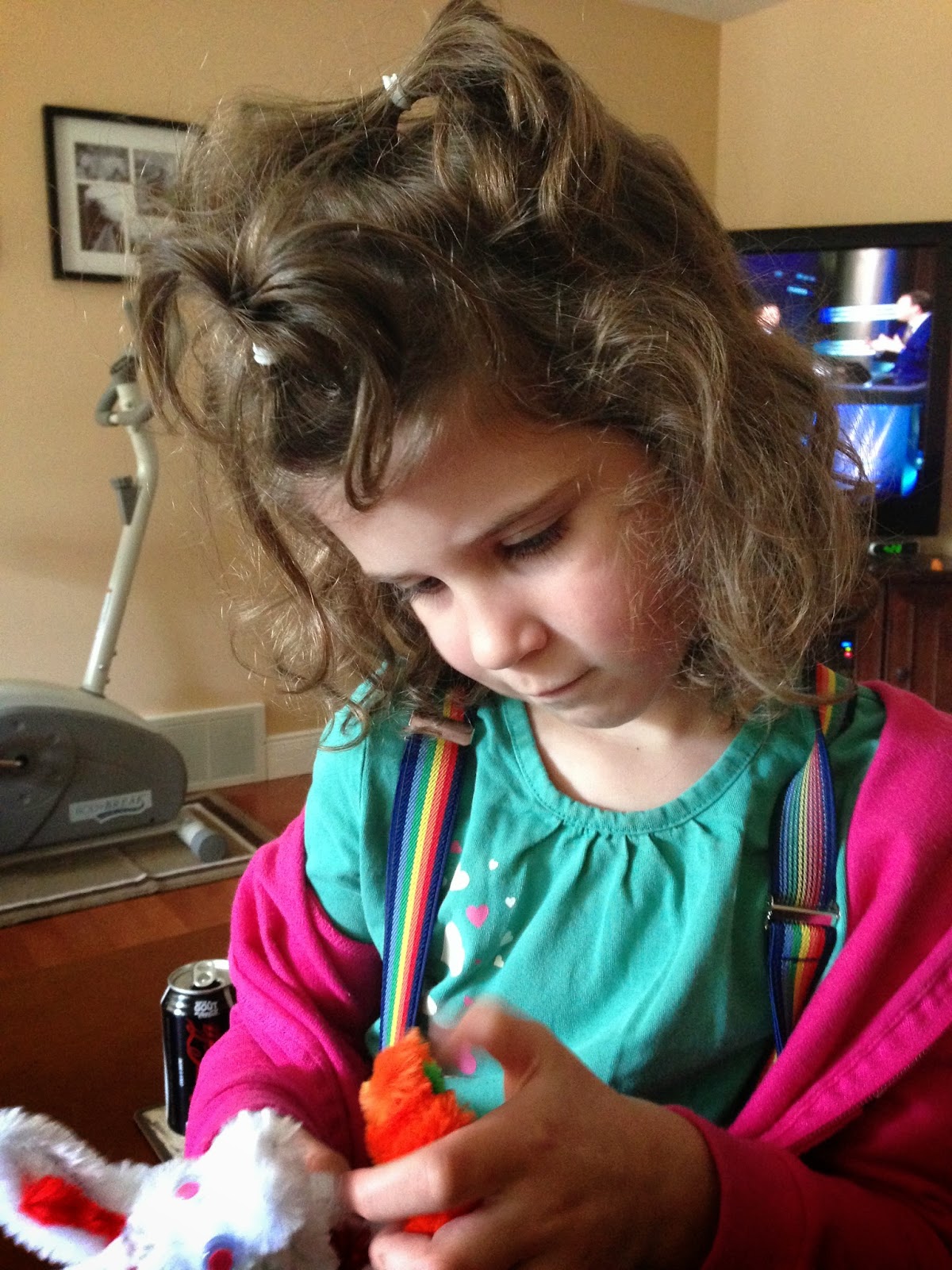 Posted by adequatemom at 9:00 AM No comments: