Today you are a hundred and five months old. 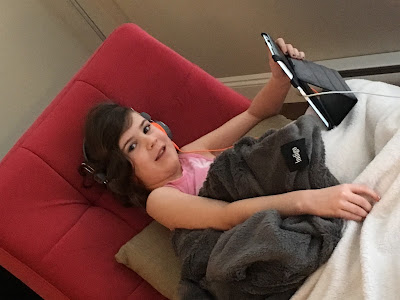 I was hoping that nine years old would be the age of more independence, and though your birthday is still a few months away, that hope is being strengthened week by week as you continue to impress me with your willingness to learn new habits. The latest addition is that you are now willing and able to dress yourself in the mornings. Make no mistake: you've been physically capable of dressing yourself for literal YEARS now. But lying on our bed complaining about how tired you are and how much you wish you could go back to sleep is just SO much more fascinating, so that's generally what you do. Dad puts all your clothes on you as you whine so we can actually leave the house on time; we've never actually experimented with making you go to school in your pajamas. But while we were away in Mexico, Gramma Karen reported that you dressed yourself every day and reported downstairs for breakfast. WHAT?! The jig is up, kid! Since then, I've been putting your clothes on the chair in your room in the mornings (instead of on our bed) and encouraging you to get dressed on your own. Sometimes you are still too tired (aww, muffin) but most of the time this works. 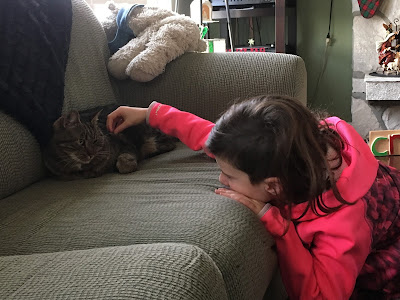 Between Christmas and New Year's, we travelled to Powell River to spend time with my parents, your Grannie and Grandpa. Auntie Sara and your cousins also joined us. The usual fun times, laughter, mayhem, and silliness ensued. You and your cousins get along pretty well, which is nice, and they never seem to get tired of you, even though you're younger than they are. Maybe it's a novelty to have someone so utterly fascinated by everything they do and say. We taught them how to play "Ticket to Ride", which you received for Christmas, and the three of you also spent time at the nearby playground. One night, the Burnikells and the Ottos came over, including many assorted kids and grandkids, and you coloured happily with Ayla and Violet. It was cool! 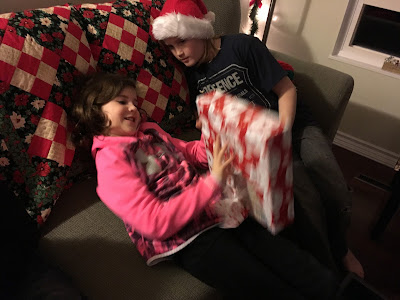 On the day we were to leave, the morning ferries were cancelled due to weather conditions, so we were still in town for Grandpa's weekly lunch with his dad, Great Grandpa. Your cousins are familiar with this ritual as they sometimes go along, when they are visiting Grannie and Grandpa over summer vacation. At the last minute, you decided to go along too (where the cousins go, so too shall Gwen go). I'm sure Great Grandpa was tickled to have all three of you there to entertain him over lunch! 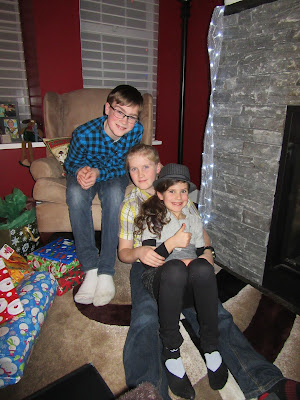 We finally made it home and then it was time to get ready for New Year's Eve. I was scheduled to sing at the theatre as part of their Gala show; you and Dad, opting out of the Family Finale party we've attended the past couple of years, decided to stay up late and watch Star Wars movies. You actually stayed up all the way to midnight (and beyond) and were still awake to say Happy New Year to me when I got home at about 1:00am. I could tell you were proud that you had reached this big-kid milestone! We all had an enormous sleep-in the next day, and I don't think we got out of our pajamas all day, which made the return to normal working schedules that much harder.


School didn't start up for another week, so you spent a couple of days at Frosty Frolic camp. You've been to enough of these camps now that you can fit in pretty seamlessly, especially when you aren't there long enough to develop any conflicts with the other kids. Two days at camp, and then you went to a double sleepover at Gramma Karen & Grandpa Keith's house. As is our typical routine, we met at Wendy's for lunch to pick you up; you raced across the restaurant to give me an enormous hug when you arrived. It's not often you are that happy to see me, so that felt really really good! 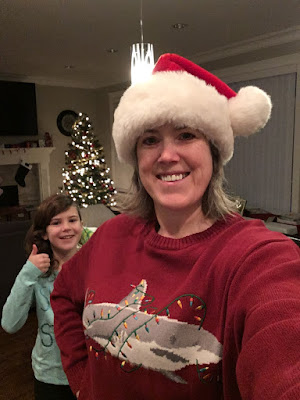 We had your friend Kenzie over for a playdate and sleepover that weekend, serving as yet another reminder that sleepovers are terrible. NOBODY gets any sleep! After repeated warnings from me that you girls HAD to stop talking and go to sleep OR ELSE, I finally pulled you into my bed to sleep with me (say, 10:30pm) and left Kenzie to sleep on the air mattress outside my bedroom. Dad was stuck sleeping on the couch downstairs. The next morning, with all of us exhausted and snippy, I told you I wouldn't be hosting any more sleepovers until at least the end of the summer. 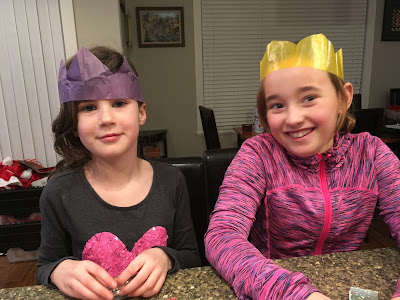 The following week was back to school and routine for you, and you handled it pretty well. You were looking forward to seeing all your friends and teachers again, wishing them a Happy New Year, and so on. Turns out, though, that your teacher had some kind of a fall over the holidays, and has a broken arm, so she won't be back in the classroom for some time yet; you have a long-term substitute teacher currently, who, fortunately, you seem to get along with quite well. When I encouraged you to make a "Get Well" card for your teacher, you rolled your eyes and told me that you wouldn't be able to give it to her until she got back, so really, MOM, what would be the point, she'll already be well by then?! Oh, fine, what do I know!

Your friends Reilley and Erik invited you to a giant Nerf battle at their school gym, and your amazing Dad made you some amazing armour so that you wouldn't be a giant wimp about getting hit with Nerf darts. There were about 20 kids there, and you had a great time playing Capture the Flag. What a fun idea! 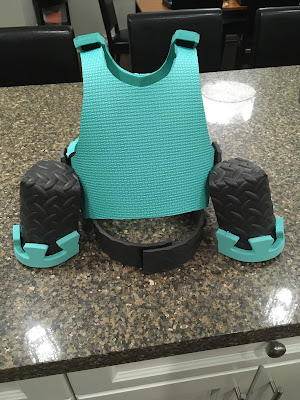 This past weekend you were invited to your friend Arielle's house for a birthday party and sleepover. "Am I allowed to go to the sleepover?" You asked worriedly, referring to my recent no-more-sleepovers edict. "Oh, of COURSE you can go!" I responded. "It's someone ELSE'S mom who won't be getting any sleep, so you go right ahead!" Perhaps not the most empathetic response, but there you have it. When we picked you up the next morning, we were told you'd been awake until sometime between 1 and 2 am. Okay then ... this time I really mean it, NO MORE SLEEPOVERS until August. The way you temporarily morph into a moody two-year-old the next day - full-body temper tantrums at all - just isn't worth it! My new plan is that if you're invited for a sleepover, I'll just come pick you up at 9pm (right around the time the hosting parents are putting the kids to bed). You won't miss any fun, and you might get some sleep. 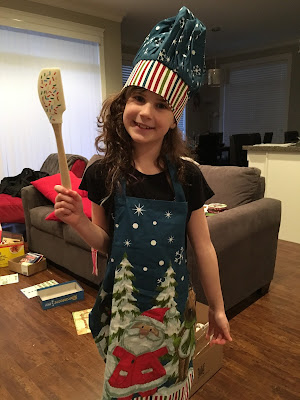 Another thing that happened this month is that you learned how to tell time! I came across an ad for a free app called "Telling the Time with Flik and Flak" and thought, Sure, worth a try! I downloaded it, you played through the games, and twenty minutes later, you could tell the time. Huzzah! We only have one "analog" clock in our house, in the living room, and I try to remember to ask you to tell me the time from it at least once a day, so that you can practice and solidify that skill. I am not at all surprised that you have been able to pick up the skill from an app that you could not grasp when I tried to teach it to you, because whimsical animated characters and an earnest British accent are so much more engaging than boring old Mom.

Anyway, that's all the news for this month, Gwen! I am super proud of you and so glad that I get to be your mom. Keep being awesome!