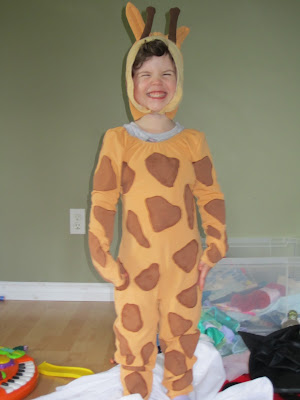 I’ve got to say – I LOVE having a three-year-old. I love that your attention span is long enough to do stuff that I enjoy doing, like nature walks or baking. I love that we are done with naptimes, diapers, specialized food and utensils – you and I can leave the house with a small bag of necessities and just go where the mood takes us. I’m always on the lookout for free (or cheap) activities, and you are ready to embark on anything. We’ve gone to a parade, we’ve attended a street party, we’ve checked out the museum … anything goes, and we are BOTH having fun. It’s the BEST! 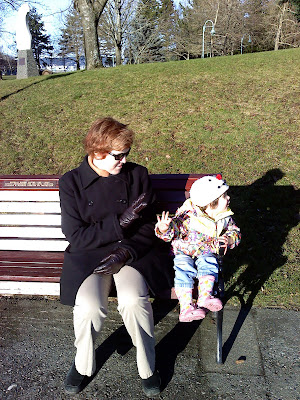 Never was this more apparent than a few weeks ago. Your dad was out of town, and friends of ours had invited us to a barbecue. I was a little worried, because in this particular group of friends, we are the only ones with a kid – in fact, with Dad away, I probably would have turned down the invitation if the inviter had not specifically said, “You and Gwen are welcome to come.” I prepared mindfully, bringing along bubbles, a small notebook and crayons, a rubber ball, your beloved ‘matching game’, and your digital camera. It worked! You socialized well with the adults (after a brief shy period), played with them and by yourself when asked, and were generally awesome. I loved that after you ate your customary two bites of dinner and declared yourself to be done, I could tell you to go play in the yard by yourself for a while, while I finished my food. You were sometimes a little demanding that someone play with you, but I told the other adults that “No, thank you,” was a perfectly acceptable answer, and sure enough when you got that answer you respected it. In all – you were a fun and charming addition to the party, not monopolizing anyone’s time (even mine). Later in the evening, another couple arrived with their 6-month-old baby, and I was reminded how much of a chore parenting is at that stage: the parents had to take turns eating, and someone was always “on duty” to soothe, rock, feed, etc. In contrast, I was easily able to participate in adult conversation (!) while you happily played nearby. I was so thrilled to be mom to a three-year-old! 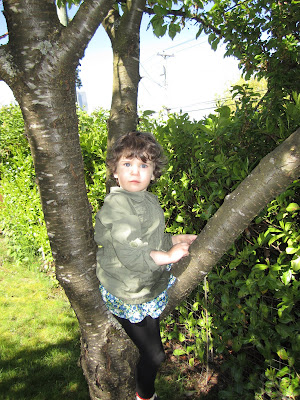 In general, you are getting more and more interested in playing by yourself, and embarking on imaginary play. Your imagination is amazing. Our bedtime routine has expanded to include a few of your inventions: we used to sing “Flying V” before bed, but this has evolved into me singing a variation called “Flying Superhero named Gwen”, for which you feed me each one of the lines immediately before I sing them. The lines vary a little depending on your mood, but several themes are consistent: Gwen flies way up where the stars and the planets are, and she doesn’t have a mama and dada, so she flies there all by herself, really fast. I did ask you if you liked having a mama and dada, after listening to you imagine night after night that you didn’t, and you confirmed that when you are Gwen, you like having a mama and dada, but when you are a superhero, you don’t have a mama and dada. That explains it. 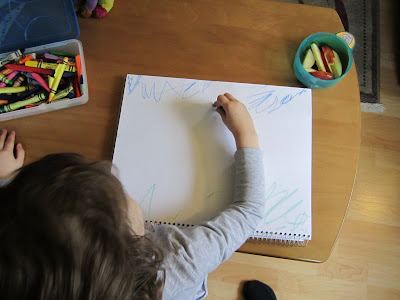 The last part of our bedtime routine takes place with the light out and you tucked into your bed (two blankets, lambie and bunny, special pillow, monkey pillow, cup of water, baton all within reach). That’s when you tell me your ‘rainbow story’. Here is a typical one:
Once upon a time, there was a magical princess. She lived in a castle. And she had a king and queen. She said to them, “Can I go to the beach to make sandcastles?” and they said, “We want to come with you!” So they all got in the car and drived to the beach. And the king and queen helped her make sandcastles. Then they goed home and the princess goed to bed. The end! 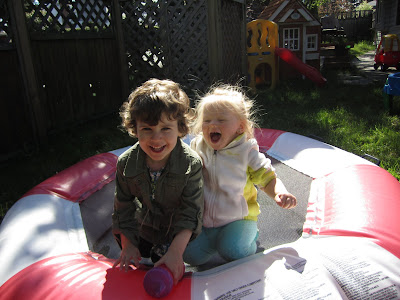 Now, expert comedians know that the “moo” is supposed to come while the straight-man is saying, “Interrupting cow who?” because that’s what interrupting means. Me, I’m just astounded and impressed that you told a joke consistently from start to finish. Mike and I were laughing and he decided to poke fun at your comedic skills a bit. “Hey Gwen, do you know what the secret of good comedy is?” No doubt he thought you would say, “No, what?” and then he would get to tell you that it’s timing. But you surprised us a second time! Your eyes lit up, and you said, “YES! I have it, it’s upstairs!” You immediately rushed upstairs to fetch the secret of good comedy, while we waited and laughed some more.

After a few minutes of suspense, you returned downstairs with a little black case that actually looked like it COULD contain the secret of good comedy. You then proudly opened it to reveal your collection of Mr. Potato Head parts. Your humour is unconventional, but it’s undeniably hilarious, that’s for sure. 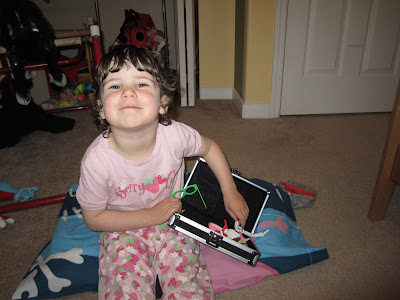 About a week ago, we were doing something in the kitchen and I spotted the unmistakable signs of you needing to go potty – wiggling uncomfortably, bouncing, etc. “It looks like you need to go potty, Gwen,” I said. “I’ll put this snack stuff aside and wait for you to come back to help me. You go potty.” “NO,” you said in no uncertain terms. “I don’t need to go!” “Are you sure?” “YES.” Alright then – we went on with our task. Less than a minute later, you suddenly said, “Gwen needs to go potty!” and rushed down the hall. As you situated yourself on the potty, you shouted “Mom, say ‘I told you so!’” Which I did. In between giggles. 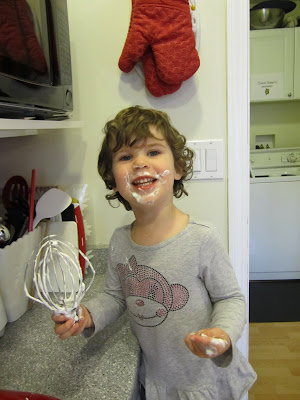 Last weekend, we were at your grandparents’ house to celebrate Father’s Day. Your Grandpa Keith hinted all through dinner that there was something special to do afterwards, and he was not kidding. He said he’d ‘found’ a map while walking through the forest, and it looked like a pirate treasure map! Your response was so adorable: every time he suggested that we should go follow the map and find the treasure, you would ask with such excitement, “Can I COME?” As if we would do it without you!

So after dinner, we put on some pirate accessories (always on hand in the toy box) and unfurled the map. It led us from one checkpoint to another around Gramma and Grandpa’s yard; from the deck, to the shop, to your treehouse, to the garden, and finally to a spot right near the entrance to the woods. There was an ‘x’ made of sticks that matched the ‘x’ on the map, and sure enough, we found buried treasure in there! A tin held some chocolates, a seashell, and a little toy for you. Really, it’s amazing that those ancient pirates knew where your treehouse and Gramma’s garden would eventually be built, don’t you think? 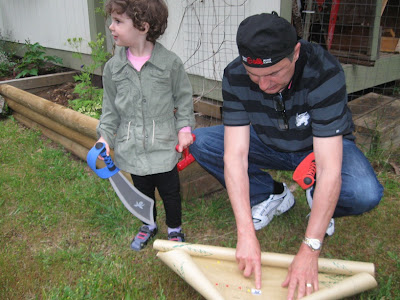 You have lots of various passions, which I think is excellent. You are still utterly fascinated with ballerinas and ballerina dancing. I’ve been taking you to a Salsa Tots class (free for the summer!) and it’s held in a dance studio. The first time we got there, we were just waiting to go into our class when the previous class let out: a class full of 7-9-year-old ballerinas, in costume, preparing for their recital. Your eyes just about burst out of your head. “Mama, are we going in there?” You looked as if I had brought you to the most wonderful place in the world. Ballerinas! Right in front of you! I can’t wait for Dada to get a job so I can enroll you in an actual ballerina class. In the meantime, you thoroughly enjoyed Salsa dancing as a substitute. 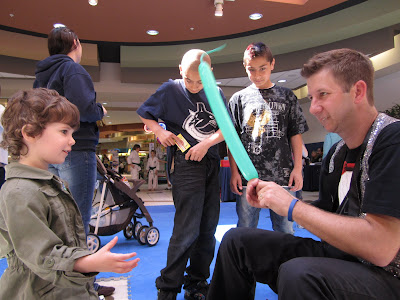 In a move that heartily pleases your dad, you are becoming very interested in science shows. We found a CD/DVD set at the library called “Here Comes Science!” by TMBG, and you are very into it. You also asked for Bill Nye (the Science Guy) by name about a week ago, which pretty much made your dad’s entire year. He is very determined that you should not shun science or math just because you’re a girl, and he’s thrilled that you have an interest. You have a great memory, too, so you’re actually learning some useful stuff while you watch. 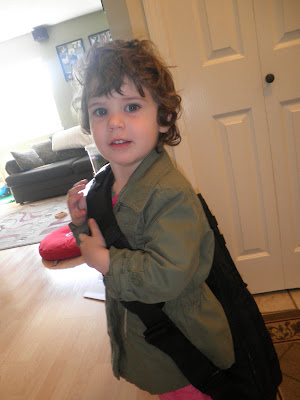 Conversely, you have picked up an interesting phrase somewhere along the way that troubles me a bit. Every once in a while, you will say, “That’s only for boys,” or “That’s only for girls.” Even more intriguing – there’s no clear pattern in the activities you’re assigning to boys and girls; i.e. you have not declared that dolls and tea parties are for girls and trucks and dinosaurs are for boys. I gently correct you each time and say that girls and boys can all do the same things, but actually I think what I should be doing is listening instead of talking. A few days ago, we were all having breakfast together. For beverages, you and I were having a smoothie, and Dada was having a protein shake. You observed that my cup didn’t have a lid on it, and your cup didn’t have a lid on it, but Dada’s cup did. And then concluded, “So boys like to have cups with lids, and girls like to have cups without lids.” It’s clear to me that you are working to sort out your world and make sense of what you see around you. Maybe I don’t need to leap so quickly to contradict your observations. 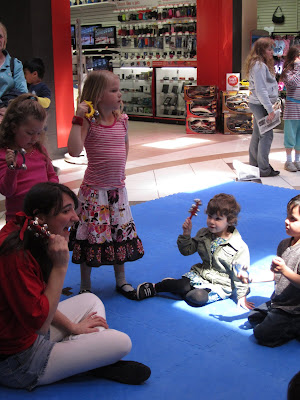 I’ve written so much this month, Gwen, and I guess that’s a reflection of how much I am enjoying this stage with you. It seems that with each passing year, you just get better and better. I’m so glad I’m your Mama, and I love you a million, billion, kajillion and three! 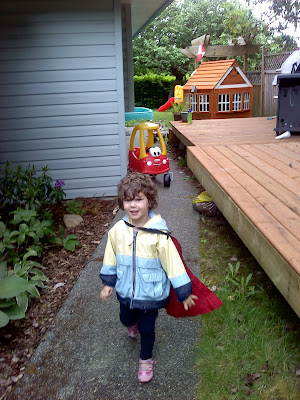 Love,
Mama
Posted by adequatemom at 5:48 AM No comments:

Yes, Chris passed the SOPAT. He is now at Stage Four of the 7-stage process. The first three stages have taken six weeks - no word yet on when the next stage (interviews and questionnaires) will take place.

Yes, Gwen had a better day at daycare after the Magical Ballerina Fairy Princess propaganda bedtime story. I think giving her a strategy for when she is not feeling sociable was really helpful. Now whenever we see her about to blow, we offer a cuddle with Lambie as an alternative. I especially like that she is seeking comfort from herself and an inanimate object, rather than getting attention from an adult.

Thanks to all of you who left kind and encouraging comments, and sent positive vibes our way!
Posted by adequatemom at 10:34 AM No comments: