Today a really lovely box arrived at my doorstep. 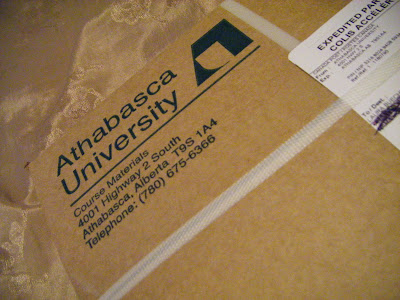 by Will Ferguson. The protagonist of the book is an editor who - get this - gets paid to read books and tell his boss which ones are worth publishing. He also gets to make snarky comments about the ones that aren't. This sounded like a good job, and I figured an English degree was a good step towards getting a job like that. But as I couldn't afford to quit my job and do school full-time, distance learning via Athabasca University was the best solution.

Since 2002, a lot has happened in my life. I left my first husband and moved to a brand new city - that was the first time I took a break from school. I re-married, got pregnant, bought a house, had a miscarriage, got pregnant again, all while continuing to study. Somewhere in the midst of all this it became clear that a degree in English would probably not affect my work life in any way, so finishing the program became valuable merely for its own sake rather than as a means to an end. I took a year off both work and school when Gwen was born, and returned briefly to my studies in early 2009 - only to discover that trying to balance school, work, motherhood, volunteer duties, and the ever-elusive "having a life" didn't seem to work. School was the thing to go, and though I felt it was the wrong choice I didn't know how to correct it.

Now it's 2010, and I have 15 credits left to earn. FIFTEEN. That sounds like such a piddling little number, doesn't it? Full-time students could earn that in one term, maybe two. Alas, I am not a full-time student. I am a full-time employee, I am a full-time parent. It takes me about six months to finish one 3-credit course. That means that finishing up those last fifteen credits will take me about two and a half years.

Do you know what the date will be in two and a half years? November 2012. Exactly ten years since this ridiculous, amazing, misguided, inspired, brave and crazy dream began.

That's why today feels different. This is the first time since I started my degree that there is an end in sight, a firm(ish) plan for when and how I will complete this program. It means that I will be studying non-stop for the next 2.5 years, and because I have already reached the maximum number of prep and junior-level courses, I won't be able (as Chris suggested) to take straightforward and easy stuff like Basket Weaving 101. All my courses have to be above the 300 level, so I'm taking stuff like Popular Culture and the Media, Psychology and Women, and Literature and Hypertext. No, it won't be easy. But the thought of finally being done, of having at last reached this lofty goal - and the poetry of having done it in some arbitrarily-defined time, like a decade - is immensely appealing. I'm going to do this.

I've contacted an advisor and confirmed that the degree requirements have not changed in the intervening decade (!), and that the courses I plan to take will fulfil them. I'm working on a study schedule and wistfully fantasizing about ways to take some time off work to get this done.

When I became a mother, I struggled with the feeling that spending money on my own education - which, as it seemed it would not genuinely affect my career, felt like a vanity project - ultimately took away from any money that could be spent on Gwen's future education. And who knows, maybe Gwen's education would actually be in the right area and at the right time and able to do her some genuine good, so how could I take away from that? It was my wonderful husband Chris who put me straight, pointing out what a great role model I would be for Gwen if I followed through on my plan and completed this goal. This new aggressive plan for completing my degree will mean sacrifices by all three of us, so it genuinely will be a family victory if - no, WHEN - it comes to completion.

Posted by adequatemom at 9:46 AM

Email ThisBlogThis!Share to TwitterShare to FacebookShare to Pinterest
Labels: life beyond Gwen, school