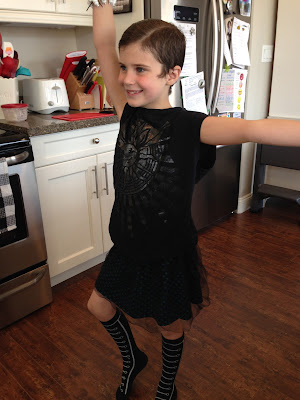 This is a really fun time of year. The level of activity ramps up, with lots of year-end performances/events/recitals/outings/etc., but at the same time the extra-curricular stuff is winding down and dropping off our calendars, one by one. It’s a great feeling. As I write this, both your gymnastics and piano lessons are done for the summer, and you have only a few days left of school and of after-school fun with your babysitter. 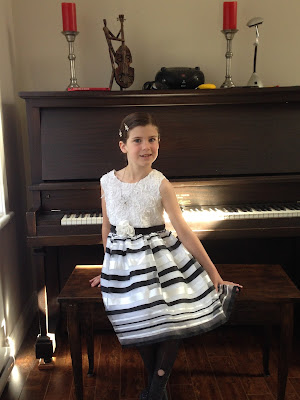 I made some lovely thank you cards for your teachers this year, and when it was time to fill them in you decided that “every good card needs a poem on the inside”, so we quickly made one up. I wrote it out on a scrap piece of paper, along with the teachers’ names, and left you to copy the text and fill in all five cards. To my surprise and pleasure, you actually did this, and did an awesome job too! Here’s a photo of one of them. 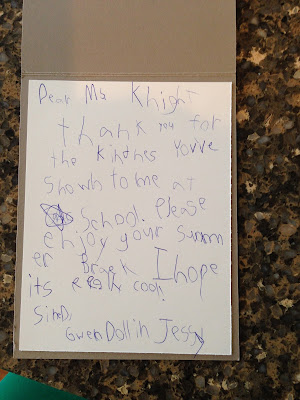 Your year-end events for piano and gymnastics both went well. At your piano recital, you very proudly played the Star Wars theme. At the gymnastics fun meet, you struggled a bit: you forgot your floor routine partway through, but you followed the old stage advice “the show must go on” and just made up some moves until the routine was finished. I thought this was a good idea! You were disappointed with yourself, though, and a little frustrated. The meet also gave Dad and me an opportunity to observe you in an environment of other kids – not always a pleasant experience. The coaches had asked everyone to show up 15 minutes early, which we did. All athletes (that’s you) were asked to sit in lines on the gym floor mats while we waited for the meet to begin. This did not work too well for you, and Dad and I had a perfect view of the 20+ kids who were sitting (mostly) calmly and still, and you bouncing around from one place to another: greeting a coach with a hug, chatting with another gymnast, playing with the gym props, lying on your stomach and kicking your legs, and so on, and so on, and so on … It’s not always fun to be reminded of the differences between you and other kids. We really enjoyed watching your routines during the meet itself – floor, bars, beam, and vault – but the most awful and painfully embarrassing moment came at the very end of the meet. The head coach was announcing each athlete’s name so they would come to the large podium, receive a medal, and then pose for a photograph before receiving a certificate and returning to the floor. The coach was doing an especially good job of picking out each athlete’s parents in the audience, directing the kids to pose and smile on the podium long enough for them to get a good photo. Finally, it was your turn, and I had the camera ready. You got up on the podium, then instead of accepting your medal, turned to pick a fight with the coach about the pronunciation of your last name. The pattern of the awards routine was disrupted; there was no lengthy pose for you to get your photo taken. I was so frustrated, disappointed, and yes, embarrassed. Making the whole situation worse? THE HEAD COACH HADN’T EVEN ANNOUNCED YOUR LAST NAME WHEN SHE CALLED YOU. She didn’t announce anyone’s last name – it was a small enough group that she didn’t need to. But you needed to pick a fight about it anyway, because last year when she called you, she’d said your name wrong. And if it happens one way one time, it better happen that way every time, or YOU WILL PICK AT IT. 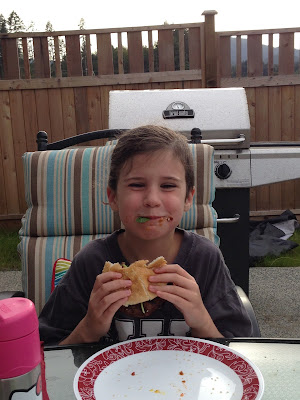 We went to another year-end event, the Family Barbecue hosted by the Nanaimo Theatre Group. I am actually part of the committee that runs social events like this, and I was one of the main organizers of the barbecue, so … yeah, we kinda had to be there – despite the rain. The barbecue turned out pretty well, actually – we had about thirty people in attendance, including a good group of kids, and you had a lot of fun playing with Graham and Genevieve. 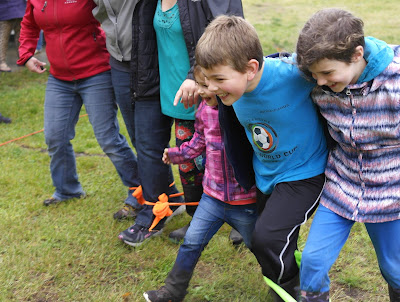 We went to a check-in visit with your counsellor earlier this week. She has a large and wonderfully well-trained dog, Jake, who is often part of your sessions together, and this visit was no exception. At the end of your time together, you got to feed Jake a banana while we watched. You broke the banana into chunks and made Jake do different things in order to get each one. I was very impressed with the way you used your voice and actions to control Jake, a large and strong dog. Your usual fidgety, distracted nature was not in evidence, and you needed no assistance from the adults around you to make Jake follow your commands. It was really impressive to see, and it made me look forward to the time when we get our own dog. 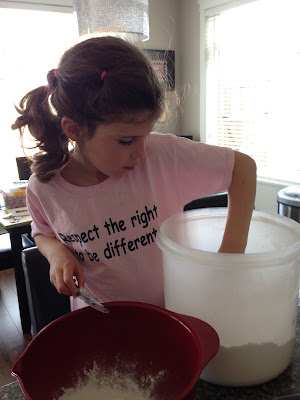 Love,
Mama
Posted by adequatemom at 1:49 PM No comments: