Today, you are ninety-two months old. 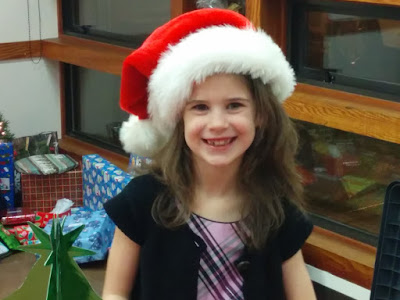 It’s been a great month. I’ve had occasion, this month, to reflect back on the past two seasons – the enormous transition of selling our house, packing, and moving to a new house – all against the backdrop of your volatile behaviour. Looking back on that time has reminded me of how much better things are now – of how much work you have done to improve your behaviour and your emotional self-regulation. You have really come a long way in the past three months, especially since school started and you began to find your new normal in amidst a new classroom, a new teacher, and a new social hierarchy. I am so immensely proud of you, my girl. 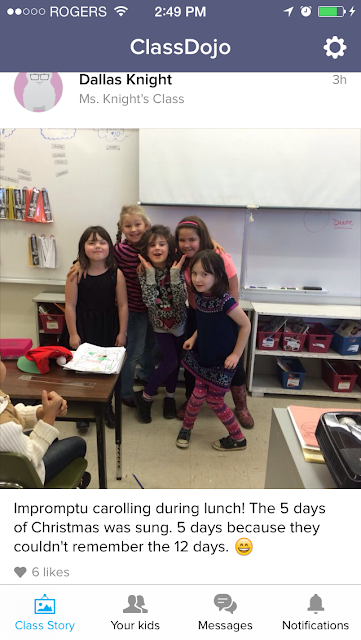 Your report card also shows how hard you’ve been working. It’s no surprise that you are “Exceeding Expectations” in both Reading and Science. The whole report card is great, full of positive marks, but what impressed me the most was the section at the bottom about work habits: Maintains focus, Works independently, Completes assignments, Follows directions. You earned a 3 (Meeting Expectations) on ALL of these! That’s pretty impressive and shows a lot of effort and attention on your part. Way to go! 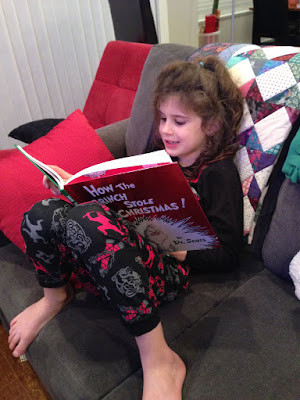 Fortunately, this is an easy time of year to fling rewards your way. We’ve been attending and participating in all kinds of fun seasonal events, and some of them we’ve specifically told you are because we are so proud of you and want to celebrate with you. We started off the season with a Christmas craft – I bought several boxes of clear glass ornaments, and we set about filling them with either shredded paper or melted crayon bits. I think this was our most successful Christmas craft effort ever, as we made twenty-four ornaments in total and you stayed engaged and on task for just about the entire time. We also made gift tags for them so we could give them to all the friends and family you’d chosen – including your teacher, piano teacher, principal, and many others. 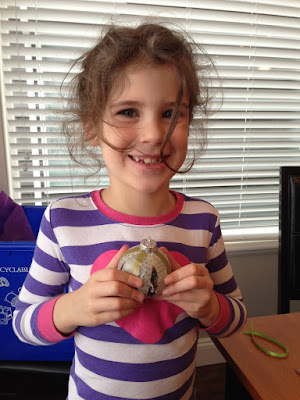 We also put up our Christmas tree earlier than usual this year, so that we’d have somewhere to put all the gifts when we returned with them from English Family Christmas. Of course, as you have every year since 2008, you were hoisted on your Dad’s shoulders to place the star on the tree. It was so special to decorate our tree in our new home! 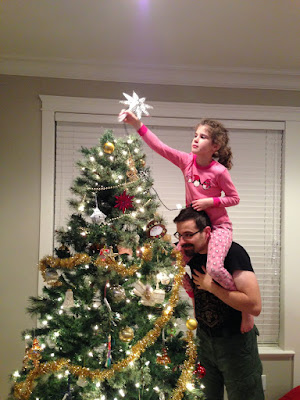 English Family Christmas was super fun as usual. This year it was held in Gibsons, hosted by your Auntie Sara. You got lots of time to play with your cousins, which is your favourite thing to do ever. After a delicious meal and lots of presents for the kids, we all sang Christmas songs and carols together. I really enjoyed watching you and your cousins Kiera, Hannah, Haylee, and Sara all sing “Let it Go” from “Frozen”. 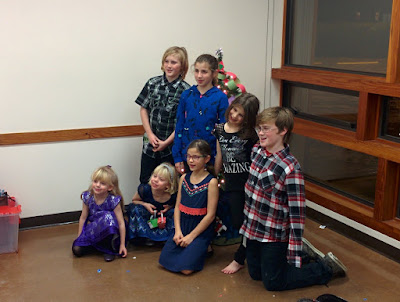 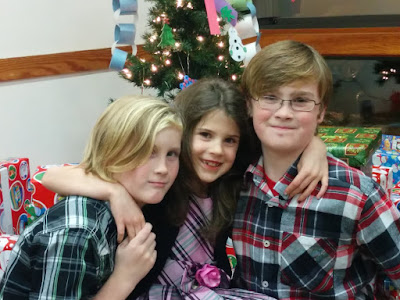 Just a week later, it was time for your Christmas piano recital. You were originally planning to play a song from “The Nightmare Before Christmas”, but just a few weeks before the recital you decided it was the wrong time of year for that song, and chose to play two Christmas songs instead: “Jolly Old St. Nicholas” and “Angels We Have Heard on High”. As parents don’t attend the Christmas recital (it’s just an informal gathering in the teacher’s home, with pizza dinner afterward) I don’t know how it went, but your teacher assures me you did great! 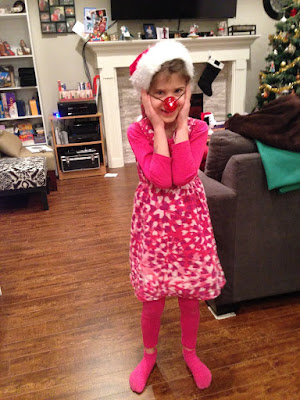 There was a sad moment at the recital too, though. When I picked you up, you told me that “the pizza party was a ‘serve-yourself’ dinner, and I am TERRIBLE at ‘serve-yourself’ dinners!” I asked you why, and you told me that “I drop things all the time, and it’s hard to find things, and I always start at the wrong end of the lineup.” It broke my heart that part of your self-concept includes “terrible at serve-yourself dinners”. You told me that instead of getting pizza for yourself, you had found a quiet corner to hide in, avoiding the dinner hubbub altogether. Fortunately, your teacher came to find you, and helped you get some food. 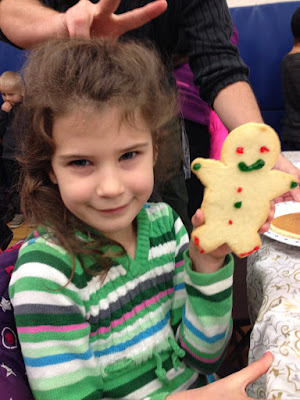 After your recital, we headed straight to the Port Theatre to watch the local dance academy’s production of “Frozen”. I had no idea what to expect but I was thoroughly impressed with the way the production was put together and the way the whole school was included. You, who have been no stranger to live music and theatre events in your seven years of life, have never been so engaged and enthralled as you were that night. You laughed with absolute giddy delight when a squad of tap-dancing reindeer performed “Let It Snow”, which just happens to be your favourite Christmas song currently (and you have ALWAYS adored tap-dancing). You wept at the climax of the show when Olaf is melting for Anna, and Anna protects her sister. You have seen me cry at puh-lenty of shows, so you know it’s okay to have that emotional response; it wasn’t the same kind of crying that means “I can’t watch this, I’m afraid, make it stop”, it was the crying that means the art has moved you. We talked later about how this is exactly what art is supposed to do, and how wonderful it is that you have a big open heart that is ready to experience all kinds of emotion! 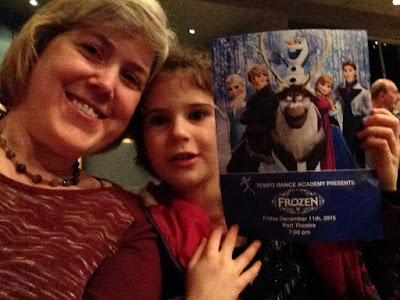 The next day brought us to the Santa Breakfast at your school. You enjoyed the pancakes and decorating a sugar cookie, but had no interest in actually visiting Santa as he received children at the front of the room. You were content to watch, and told me that “He is a stranger and I don’t feel like having a conversation with a stranger or answering questions from a stranger.” How could I argue with that? We watched for a while and then went on home, where we spent some time preparing for a fun event we had planned for the afternoon: a spa party for you and three of your friends from your new school. I thought this would be a good idea to help you cement some of those growing friendships – it was also really fun for me to meet these lovely girls and get to know them a bit! We had a delightful time applying glitter tattoos, hair chalk, and nail polish. I was really glad to see the four of you getting along so well, and hope that there will be more get-togethers in the future. 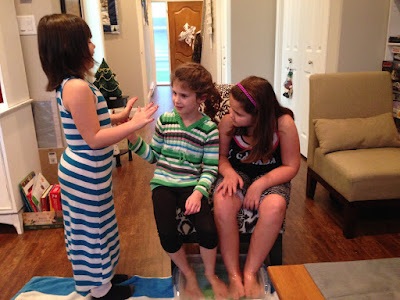 Our next outing was to see the Headliners School of Performing Arts’ production of “Into the Woods”. I admit I had an ulterior motive here – not only to enjoy yet another artistic outing with my girl, but also for you to see a musical theatre production starring kids, and see if that was something you’d be interested in doing yourself! No surprise, you are very interested. I think musical theatre would be such a cool outlet for you! We do need to finish out the year at gymnastics first, though – there just aren’t enough days in the week for more than two extra-curricular activities. 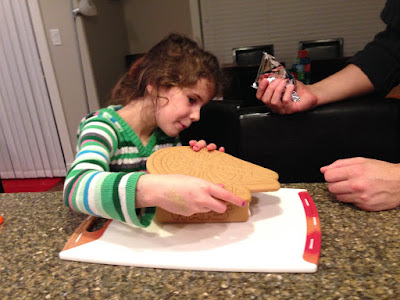 This past weekend, with the beginning of Christmas break, we had a full day of Christmas adventure. First we went to see the annual panto at the Bailey Studio – this year, it’s The Emperor’s New Clothes, and it was thoroughly hilarious. You were somewhat unamused when you met the characters after the show – as they all seemed to know your name, and you thought that was pretty weird! Well, your dad and I are pretty much fixtures at the Bailey, and we talk about you (and post about you on Facebook) and you’re pretty damn memorable. I hope you weren’t too creeped out by it! After the panto, you got to watch me and the rest of the group practice for a piece we are performing on New Year’s Eve – you have seen and heard me practice at home, and wanted to see the whole thing. 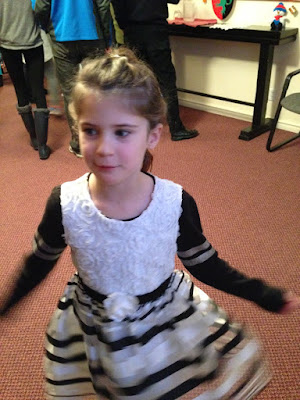 Next, we went out to Boston Pizza for dinner and finished up the evening at Milner Gardens’ Winter Wonderland. There are always way more Christmas-related events and activities than we can possibly cram in, but you specifically asked for us to attend this one. As we walked through the forest (in the cold, rainy night) we saw a lighted sign pointing the way to Santa – and you surprised us by saying you wanted to go see Santa, and were even willing to wait in a fifteen-minute lineup to do so. You wouldn’t sit on Santa’s lap, but you sat with Mrs. Claus, and the three of you talked for a few minutes while we snapped some pictures. Afterwards, you told me that you didn’t really enjoy it, because Santa asked too many questions – “He should already know all the answers, Mom, if he’s watching me all the time.” I didn’t quite know what to say to that. Gwen, I am so glad that we are once again getting reacquainted with the awesome kid that you are. As this amazing, wonderful, and yes, turbulent year comes to a close, I am ever grateful that you are my daughter. 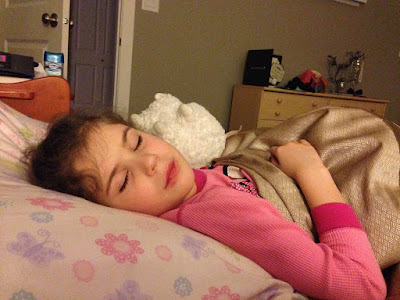 Love,
Mom
Posted by adequatemom at 9:00 AM No comments: