Apparently, as far as my life is concerned, 5 is the new 13. As in, setting off on a trip on (insert ominous music) Friday, June 5th, was a colosally bad idea. Why didn't anyone tell me?
I had only three things to accomplish on Friday. First, at 9am, meet with a teacher at Enchanted Woodlands childcare centre to drop off an application for Gwen to attend preschool there. Second, catch the 3:15 ferry from Comox to Powell River. And third, make sure Gwen got some kind of decent nap in between these two appointments.I tried my damndest, but I failed at all three of these things. Or should I say, the WORLD FAILED ME.
9am, I show up at the preschool. Some background: I first called this centre last July, when Gwen was a tiny little ten-week-old, to put her on the daycare waitlist. At that time, the person answering the phones said "I only take names for the waitlist on the first of the month; I start answering the phones at 7:30; good luck." I was so overwhelmingly impressed with this attitude, which I like to call "Who died and made you God," that I never called back. Until The Great Daycare Debacle of 2009 convinced me that I needed to do whatever possible to make sure Gwen *never* got left in the lurch again. This meant calling every child care centre I could in good conscience send her to, and jump through whatever hoops they required in order to get her on their lists.

In order to get this appointment, I had called a woman named Ruth and left two voicemail messages for her. The third time I called - about a week after my first call - I managed to get through to her. The only reason I even *knew* that Ruth was the person I needed to speak to, was because someone I met at my church works at this centre, and when she heard I was looking for childcare she took pity on me and gave me Ruth's name. When I finally managed to reach Ruth, we had a nice chat and set up the appointment for me to drop off the applications that she forwarded to my email within 10 minutes.

So, cut back to Friday morning, when I arrive at the centre with toddler in sling and application in hand. It turns out Ruth isn't there. She's overbooked herself and won't be until that afternoon. I get a brief tour of the centre and hand in my application to someone else, who assures me Ruth will get it the moment she returns.

I fret and fume on the way home that this appointment was the only reason I didn't catch a morning ferry to PR. That Ruth had just cheated Gwen out of a few hours with her grandparents. I was pissed.

On the other hand, the schedule I'd figured out did allow for a good nap. Gwen has been eating lunch between 11 and 11:30, then going down for a nap immediately afterwards. Catching a 10am ferry would throw that right off, but I figured if we ate around 11:30 and left by noon, she'd fall asleep in the car. I even planned to drive around Courtenay for an extra half-hour or so to make sure she got enough sleep before going to the terminal, since once I stopped the car she would probably wake up.

All went according to plan. Lunch was eaten, Gwen fell asleep in the car, I drove up-Island at 20 km/hr under the speed limit since the goal was to encourage a long sleep, not to arrive at the terminal quickly. I took a scenic tour of the old Island Highway to extend the nap. About 15 minutes before arriving at the terminal, Gwen woke up, having slept just over an hour - not as long as I might have liked, but long enough that she wouldn't be unduly grouchy. We arrived at the terminal at 2:40 for a 3:15 sailing.

And that's when we found out our sailing was delayed until 4:20.

I don't know if people who have never lived on the coast can truly appreciate the challenge of keeping a toddler entertained at a ferry terminal. The Comox terminal is not like the bigger terminals with shopping, amenities, and so on. There is one waiting room, about the size of my living room, with a dozen chairs and no ventilation. There is an outdoor waiting area, about twice that size, with one picnic table and an umbrella that provides about six square feet of shade. It was the hottest part of the day and the sun was beating down on us. Worst of all, I knew that even after surviving the challenge of keeping her safe and entertained for an hour and a half at the terminal, I would then have to do the same thing for another hour and a half on the ferry.

Concerned about dehydration and sunstroke (I used to get it all the time as a kid), I started pushing her water on her. She was pretty disinterested and repeatedly pushed it away after only a little sip. However, she was quite keen on drinking from my bottle. Most of the time, I don't let her drink from mine, but in this case I was willing to do whatever it took to get the liquids in her, so I let her go for it. I made a half-hearted attempt to find the sunscreen in my suitcase - I'd lotioned her up earlier in the day, but that was a few hours ago, and I figured 90 minutes in direct sunlight might warrant a second application. I soon discovered I'd packed the sunscreen in a fairly inaccessible spot, but a fellow passenger came to my rescue and loaned me hers. Actually, the other passengers were very kind, moving over to make sure Gwen had a spot in the shade and so on. Not that she stayed still for long. Most of the 90 minutes were spent following her around as she examined every inch of her environment.

Finally the ferry came and we boarded. With visions of the air-conditioned kids' area dancing in my head, I hauled all our stuff onto the boat and walked upstairs. But what's this? There's no kids' area on this boat! 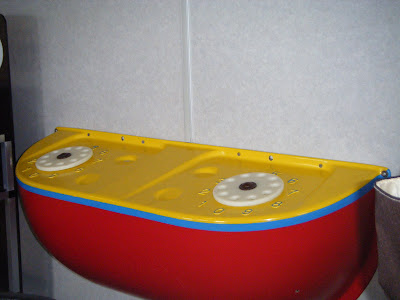 And it isn't air-conditioned, either! 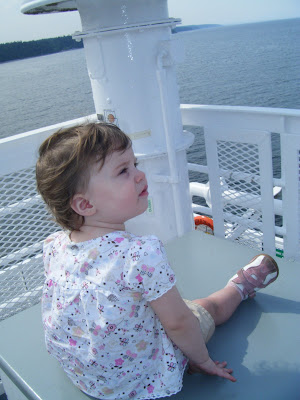 In fact, this is an old, broken-down boat that is going to take about half an hour longer to make the trip than the usual boat. By this time I have stopped being angry and am just trying to take solace in the fact that at least I'm going to get blog fodder out of this. 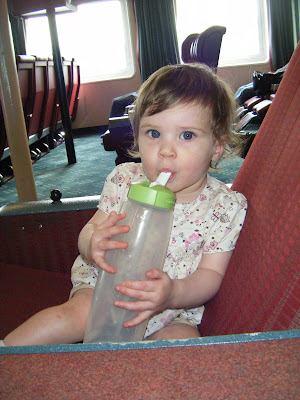 For those of you who have never taken a toddler onto a ferry without a kids' area, let me give you the highlights of what your child will find on this trip. I call this the "Oh, That's Why Toddler Leashes Were Invented!" Tour:
- the designated smoking area
- the washroom that is the opposite gender's to the parent with whom the child is travelling
- the crew-only area
- every single hazardous staircase on the vessel
Attempts to remove your child from any of these truly fascinating destinations will result in the deployment of Full Tantrum Mode.
By 6:30pm, we had landed in Powell River and were in my mom's car headed for the family home. It was half an hour past Gwen's usual dinner time, and she was pretty fractious. We got home at 7 and didn't eat until 7:30, by which point Gwen was so out of it she didn't know whether to eat or fall asleep in her high chair. Dinner was less a social event and more a showcase of all her worst behaviours, which I'm sure made my parents *really* glad they'd invited us over. Also during dinner, we discovered that the straw for her sippy-bottle was missing, making it impossible to use. Guess that's why she kept rejecting it earlier. Honestly, it felt like we had spent the entire day getting to PR, and got to have absolutely no visiting time that evening because I needed to get Gwen fed and into bed immediately.
The next day was better. 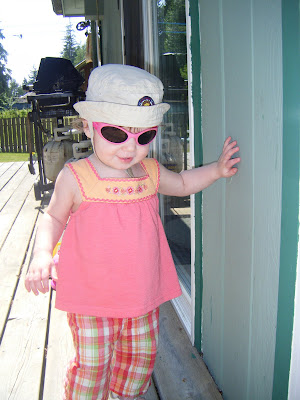 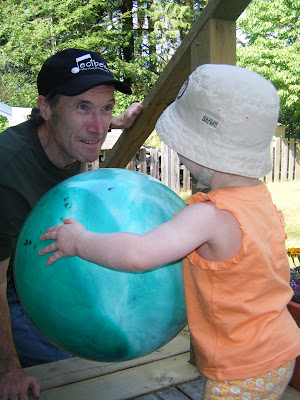 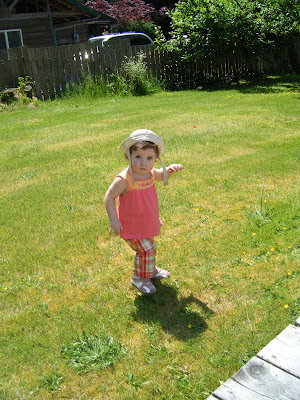 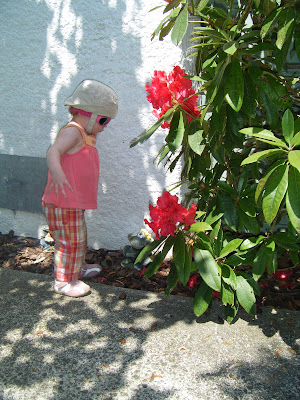 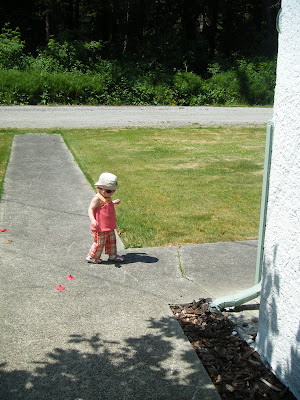 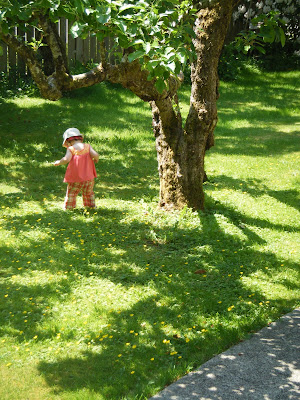 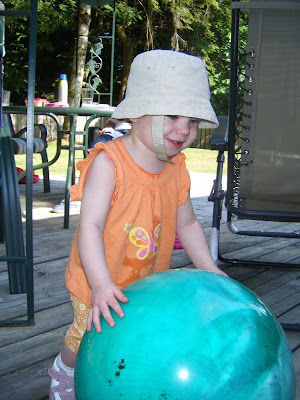 I can't tell you how cool it was to watch Gwen toddle around exploring the exact same yard I used to play in as a kid. Not to mention how fun it was watching her get to know my parents a bit. She said the word "bumpa" (Grandpa) this weekend, which I think is her first non-repetitive two-syllable word. At one point, I swear I heard her say "Hi, Granny" though it sounded more like "hi, eh-ny."
Gwen was definitely not herself: our latest check shows that she may be getting three or even FOUR teeth at once right now, so she's pretty screamy at times. She also, throughout the entire weekend, refused to fall asleep on any location other than my chest. On Sunday afternoon, I just rolled with it: set myself up in a rocking chair with a good book, and spent over an hour underneath a sleeping toddler. Whatever it took. (Wow, is this getting to be a theme?)
On Sunday, we were thrilled to note that the usual boat and the usual schedule were back in place, and the trip back home was far less eventful. Gwen and I ate dinner in the ferry cafeteria, then hung out in the kids' area for the remaining 40 minutes of the trip, where I even ran into some old friends. Our ferry landed (ON! TIME!) at about 6:45, and once buckled back into her carseat, Gwen promptly fell asleep and snoozed all the way home. The two mornings since then, she has slept in until nearly 9am.
For the most part, I love living on the coast. I can't imagine not being near the ocean. But every once in a while I bump up against the cold hard fact that unless I get rich enough to fly my own plane home, I have to deal with BC Ferries' complete indifference to customer service whenever I want to see my family. I guess I should be grateful that we all live close enough to make seeing each other more than once a year an option at all - but sometimes it's hard to find that gratitude.
On the other hand, sometimes it isn't hard at all. 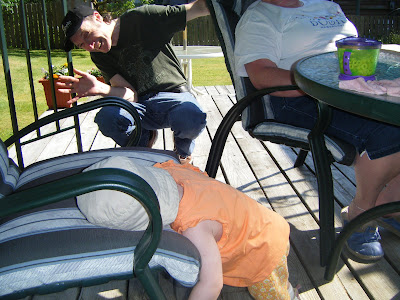 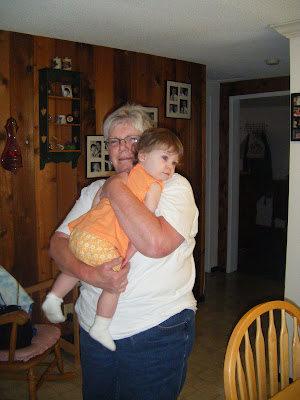 Posted by adequatemom at 7:54 PM

Email ThisBlogThis!Share to TwitterShare to FacebookShare to Pinterest
Labels: travel

Wow, Laura, she's starting to look a lot like a little you!

Traveling with the kids. Good. Times. My favorite is the plane. You have to sit in the window seat (which I despise), with a squirming child on your lap, and a stranger next to you (because Steve is behind me, with the other one). At least now Callum has his own seat... which is only remotely more tolerable. If I was rich, I'd always buy first class...

Loved reading about it, Laura. The Campbell gift of writing is alive and well. :-D