Look at you. You’re fourteen months old! You’re so big, and competent, and adorable, and friendly, and clever, and funny, and just pretty much wonderful. Except, of course, when you’re not. Then you’re whiny and demanding and clingy and angry and fussy and weepy and loud, loud, LOUD. But let’s not talk about that, shall we?

Since starting daycare two months ago, your language skills have exploded. You are communicating nearly constantly, either with real words or your own interesting babble. The point is that you obviously know the sounds you make are important and powerful – you know you are communicating. Your favourite these days is “up”, not because you want to cuddle but because you want to see whatever it is the grownups are doing from a better vantage point. 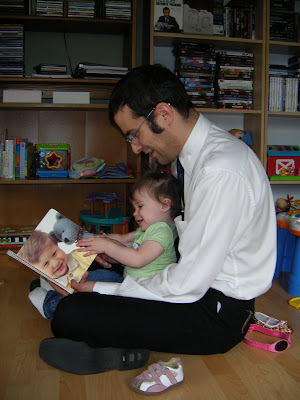 Thanks to your language skills and your interest in mimicking, your dad and I are trying to stop swearing. It’s a challenge. Last week I was at the hairdresser, describing something delicious I had eaten by saying “My word, it was tasty!” She looked at me like I was some kind of barely-functioning moron. Who talks like that? In contrast, she had already used the words “shit” and “damn” during our appointment (fortunately, neither of these were used in reference to my hair).

Though you have been saying buh-buh for many months, you can now pronounce it correctly as bye-bye, and your wave has matured also. Last night you watched me while I was on the phone, and when I finished the conversation and hung up, you walked over to where I’d placed the phone, waved at it, and said “bye-bye”. It was ridiculously adorable. 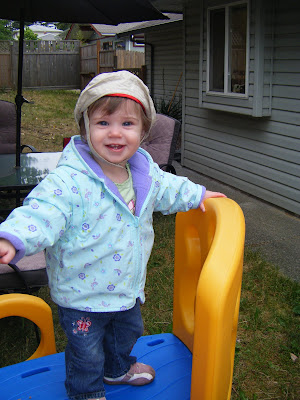 Speaking of your incredible genius, your dad recently bought me a really cool book about the making of my favourite movie. As I was looking through it, you of course wanted to see what all the excitement was about. “Look, Gwen, it’s a picture of a shark! Bah-bah,” I said, humming the JAWS theme. A moment later, you had fetched your shark finger puppet out from your toy box and were joyfully chanting “bah-bah.” Your dad and I looked at each other with a mixture of fear and astonishment. Had you really gone looking for your shark puppet? Was it just coincidence? I don’t know. Either way, I’m impressed. 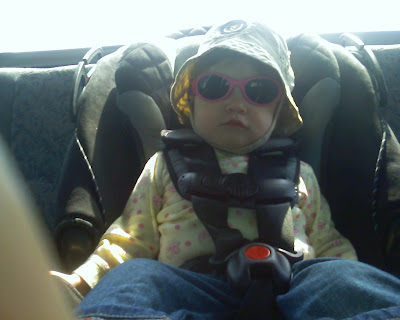 You continue to be a pretty great eater. We’ve yet to find the food you don’t like: usually our challenge is in providing enough food for your voracious appetite (and accounting for the fact that a certain percentage of whatever we offer will, despite your efforts, not end up in your mouth). You are pretty much entirely self-feeding now, which can be frustrating on those days when we’re in a rush and kind of don’t want to deal with you getting yogurt in your hair. But you generally insist on doing it yourself, and are so darn proud of yourself when you get this opportunity, so most of the time we let you do it.

I did a bit of reading recently about toddlers and food, and I really realize how lucky we are with your non-picky ways. Thanks to that, I am so ready to say goodbye to the mushy icky infant cereal. When your current stash is gone, you’re not getting anymore, and I will be thrilled to see the last of it. 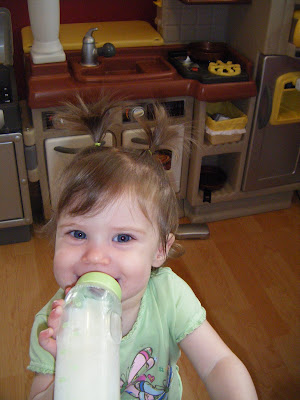 You are starting to show some signs of imagination or pretend play. You love to hold out a bit of whatever you’re eating and have me or Dad pretend to eat it. You have also learned the game of “Cheers” and often insist on clunking our water bottles together several times during any given meal.

Last month I wrote that you were not keen on walking outside on our lawn, but you have learned the knack now. You love being outside and will often find your sunhat and stand by the door, banging on it, waiting to be let out. In contrast to your usual insistence, you are pretty patient with all the things that have to happen first: socks and shoes, sunscreen, maybe a jacket – and you actually keep your sunhat on while we’re outdoors, which is great too. In general, your walking is getting better all the time – you don’t often wave your arms around for balance anymore, but just walk very confidently and steadily to whatever destination you've chosen. 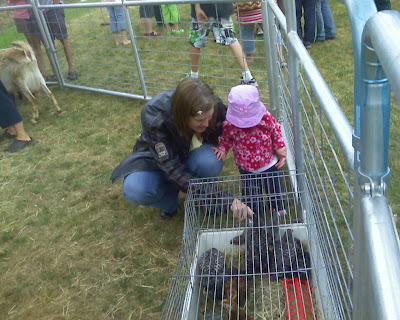 Something I noticed just this week is that you are learning to anticipate patterns. For example I recited the rhyme, “Round and Round the Garden” which begins with my fingers mimicking “footsteps” on the palm of your hand and ends with me tickling you under the chin. You “ask” me to do the rhyme again by stroking the palm of your hand with your own fingers, and as the rhyme progresses you start curling your chin into your chest in anticipation of the tickling. I would happily spend as much time as you might like playing this game over and over and over.

So, this is who you are right now. You love books and tickles and being swung around upside down. You love animals and words and being with people and doing new things. You love food and your family and the outside world and you especially love whatever it is we’re not letting you have (currently, the measuring spoons in a particularly un-childproof-able cupboard). You are totally into exploring your world, preferably in as noisy and as messy a way as possible.

We love you so much, Gwen, and absolutely adore the opportunity to see that fascinating world through your eyes. 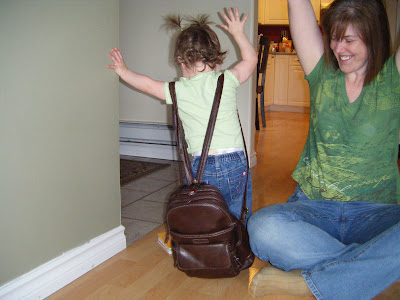 Posted by adequatemom at 7:22 PM

that last picture is absolutely adorable!