I was just a smidge concerned recently - and probably wouldn't have been at all, if I wasn't a longtime reader of Schuyler's Monster - that Gwen didn't seem to be using any consonants in her babbling. She would say a lot of "ah ah ah" sounds, but no ba or da or ma or ga. A mere twelve hours after I confided my concern to Chris, Gwen started saying "ba ba ba". And she says it with great gusto and delight, too.

The other thing she's a bit behind on is sitting. She just doesn't seem to have any interest in it, to be honest. The picture below shows a typical moment where Gwen decides she doesn't want to sit on a lap anymore and arches her back until she's either standing or lying down. 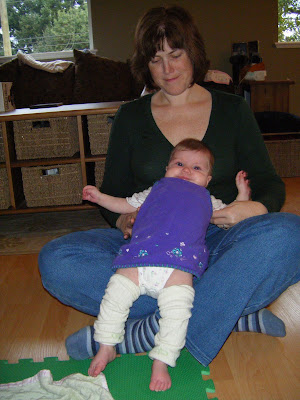 I don't know why she's got such a hate-on for the sitting, given that it's one of my most favoured hobbies. At six months, she is supposed to be starting to sit unassisted for brief periods of time, but she won't sit at all unless you hold her forcibly in that position. My best guess is that the issues with her sacrum, which have since been worked on by her chiropractor and resolved, set her back a bit in that regard. I'm sure she'll get there eventually.

Another six-month milestone is the recognition of her own name. I tested this a few weeks ago, sitting to one side of Gwen and calling out to her. Sure enough, she turned towards the sound of my voice - trouble was, she didn't really seem to care if I called her "Gwen" or "Poohead". It was the tone and voice she was responding to, not the word itself. Although it's really funny to watch your infant daughter respond when you call her "Poohead", it's probably something we shouldn't do too often. In an effort to teach her her proper name, we've started using it to great excess. "Hello, Gwen's Dad," I will greet Chris when he comes home from work. "As you can see, Gwen is happy to see you. Aren't you, Gwen? Yes, Gwen, you are happy to see Gwen's Dad. Hey, Gwen's Dad, did I tell you that Gwen's name is actually Gwen? And not Poohead?"

The milestone that Gwen has reached and surpassed, on the other hand, is separation anxiety. Last week, my mother-in-law arrived for Gramma time while Gwen was asleep, and when she woke up, she was right pissed that I was nowhere to be found. She screamed for a solid 30 minutes, despite bottle, walking, shhing, and various other attempts to soothe and/or distract. Fortunately, I arrived home at about that time. I admit that leaving while she was asleep was not the ideal scenario, but there wasn't much else to be done at the time.

Even when Gwen is fully awake and in a social mood - which is most of the time - she is starting to really check in with me (or Chris, when he's around) about other people's attention to her. I went to meet my mom and her best friend at Woodgrove Mall this past weekend, as they were on the Island for some shopping and a theatre production. Gwen gave her Grannie (whom she doesn't see very often) a big gummy smile, then turned to find me and make sure I was still nearby. At this stage, it is still pretty flattering to know that she values me above all others, though I'm sure the novelty will wear off rapidly.

I read that separation anxiety is not actually the fear of being physically separated from the parent, but a cognitive stage - a realization that the infant is in fact a separate person from the parent, which causes fear as she realizes that I won't always be there. It's sad, but also exciting to realize that she is going through such complex learning.
Posted by adequatemom at 7:36 PM

I wouldn't worry too much about the sitting. Anderson does the same thing...he loves to arch his back as a not-so-subtle hint that he wants to stand up, which is ALL the freaking time.

His babbling is still mostly ahh's too. It'll come.

We've been trying to call him by his name more lately as you have been doing with Gwen. We came to the realization that we have far too many nicknames for him, and if we keep it up he won't know what his actual name is...

That's it. I'm going to crochet her a wallhanging with "Poohead" on it.

I had no idea that at this age they would start recognizing their own name. I think I call Claire either "Bear" or "Peanut" most of the time. I should probably make a shift on that regard :).