Bits and Pieces from Land of Gwen

I'm off Domperidone now. And I'm done pumping. October 28th was my last session (a date which is also my wedding anniversary, and the fact that I had a pumping session that evening that gives you an idea how exciting our celebrations were, doesn't it?) and I got barely an ounce and you know, it's just not worth it anymore. Pump parts are packed away in the pantry and I am perfectly pleased. 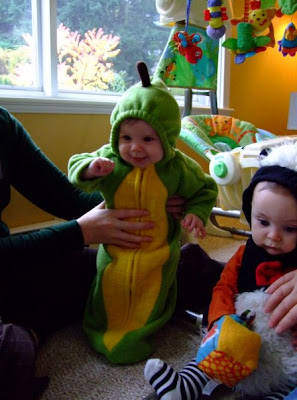 Speaking of Domperidone, I was thinking back to when Gwen was born. At the time, I was taking three pre-natal vitamins and three iron supplements a day. When my milk supply proved inadequate, I started taking three blessed thistle supplements and three fenugreek tablets as well. Then when even the herbs didn't help, we added eight Domperidone pills daily.
That's a total of twenty pills a day. Plus the later addition of liquid herbal supplement, which as previously mentioned tasted like Satan's old underwear.
I would also like to point out that at some point I was told that Domperidone is most effective if taken every six hours, so instead of taking it at four times during waking hours, I would actually take a dose of pills at 4am every morning.
Do I feel like I did everything I could to improve my milk supply? Hell, yes. Am I glad to be off all those stupid pills and back to taking my regular plain old One-A-Day multi? YES.
I am still nursing, a fact which sort of amazes me, but let me be clear and dash your hopes of altruism: I get 10 extra Weight Watchers points per day for being a nursing mom. (Twelve pounds down, 35 to go!) 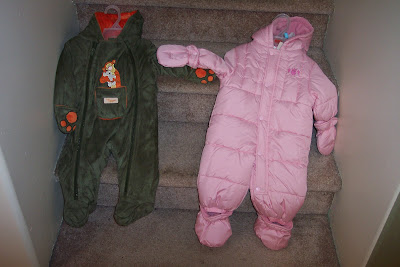 I have now purchased two snowsuits for Gwen, and I can't decide which one to return. Snowsuit #1 is green and orange and awesome. It is technically a "boys" snowsuit but I say bah to that, girls are allowed to wear things that aren't pink, dammit! On the other hand, I am not crazy about licensed characters, and this suit doesn't strike me as being, um, waterproof in any way. Which you'd kind of want a snowsuit to be. The second one, as you can see, is pink. And boring. But waterproof. But pink? We are a wee bit tired of pink 'round these parts. Although whenever I dress her in anything other than pinky-pink with an extra layer of pinkness, I get told what a cute little fella she is. And that irritates me more than I would like. 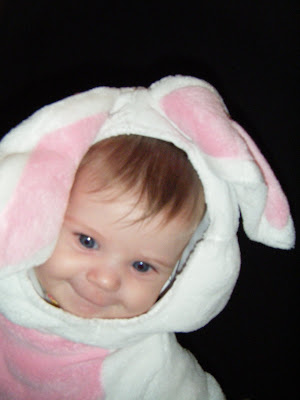 I have taken to watching episodes of "The Office" on DVD while I nurse. Sometimes, though, Gwen gets really distracted by the TV and I have to turn it off or at least pause it while coaxing her back to the breast. The other day it was paused on an image of Steve Carrell and she looked at the screen and started giggling. Then she paused, then started giggling again. Repeat, repeat, repeat. It was as if Steve Carrell was doing something hilarious that only she could see. Maybe she is just mimicking me, as I certainly look at the screen and giggle often enough. It was really adorable, and yet disquieting, because it appears I am raising a TV addict and that makes me sad.

Someday soon I am going to have to put my foot down and say "No TV while Gwen is awake." But oh, how bored I will be from that day forward. (She no longer allows me to read while nursing as I need all my hands free to manage her.) 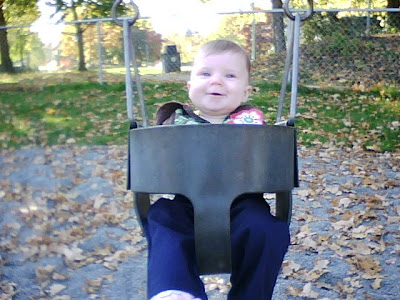 I have specific TV time, usually first thing in the morning when I'm nursing Claire. Unless I think the time-before-dinner is going to be hellish, then I save up the TV time for that time instead. I spend a lot of my day listening to cries of "Teeeeeeee-Veeeeee, Pleeeeeeaaaaase".

Did you ease off the domperidone? I didn't, then someone told me that you're suppose to because it can mess up milk supply and hormones. At any rate, I thought for sure when I stopped the domperidone that would be it, but I think I have MORE milk now. Of course, she's eating solid food, so it isn't really comparable!

Yeah, I did wean myself off it (though not very slowly: it took about 2 weeks). I don't know if it made a difference or not. Since I stopped trying for exclusive nursing I haven't really paid much attention to Gwen's feeding schedule.