I know it's a little late to be posting about Valentine's Day but I wanted to wait until the applicable parties received their valentines in the mail before blowing the surprise in my blog. But now I have to tell you all about it, because I was really proud of this project!


First of all, you should know that I consider myself a crafty person but not neccessarily a creative person. The work I am best known for is my embroidery and cross stitch, but when people compliment my work, I am quick to point out that all I did was follow a pattern, and that I didn't actually create anything original at all. To take the leap and make something unique is a bit scary for me, as I don't like to fail. But this time around, the muse hit me and it would not be ignored.


I saw an article in a parenting magazine suggesting that kids make valentines for their dads (subtle cue here about which parent they expect to be reading the magazine) by unwrapping a large rectangular chocolate bar, replacing the wrapper with fancy paper that they decorated themselves. The part that caught my attention was the red lettering "I (heart) you" with the accompanying instructions for how to create a heart out of the child's fingerprints. I loved that idea, and kept the fingerprint concept while throwing out all the rest of it. I decided Gwen's dad needed his very own Valentine's Day card.


I started thinking about how I could create the card, and the first thing I wanted was a suitable picture of Gwen. One day while Chris was at work I dressed Gwen in an adorable red sweater she'd gotten as a gift from her Auntie Sara. I took about 20 pictures: this was the best one. 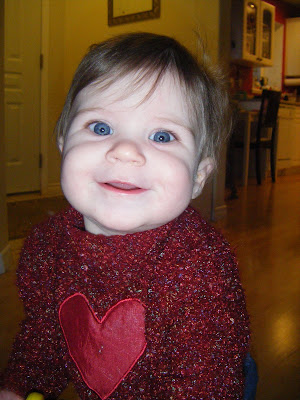 Then it was off to Michael's to buy supplies, which I did on Gramma Time. I had a gift card I'd received from my Mom for Christmas, but between my frenzy of card-making supplies and the felt I bought for another project, I overspent the gift card by nearly 100%. I ... can sometimes go overboard.


Plus, at this point I still had no real idea what I wanted to end up with, so the supplies were bought blindly. I just knew I wouldn't get another chance to return to Michael's before V-day, so I wanted to make sure I had enough for whatever inspiration might strike.


I bought a pack of 50 blank white cards and envelopes for a bargain price. I bought a red inkpad for the finger prints. I bought some fancy red paper. I bought some nifty charms and ribbon. And I bought approximately one shitload of stickers. 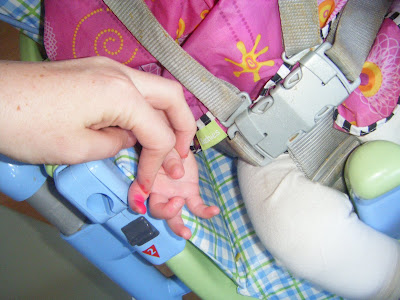 I enlisted the help of Gwen's high chair to manage her limbs while doing the fingerprints. This was a wise idea.


By this time I had decided I ought to make several cards: one for Chris, one for each set of grandparents, one for Auntie Sara, and one for Honourary Uncle Mike. I got out my set of rubber stamps, got Gwen down for a nap, and set to work. 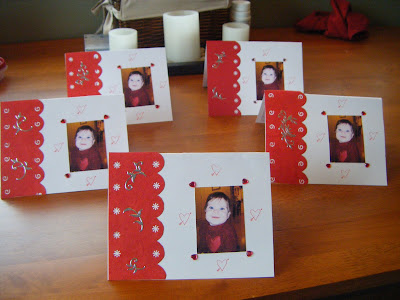 I could probably ramble on for a few hundred words about what exactly I did with the stickers and stamps and charms and paper punches and so on, but oh my word, wouldn't that be dull? Instead, here are a few pictures of the finished product, and if you are curious about how a particular thing was done please ask me. 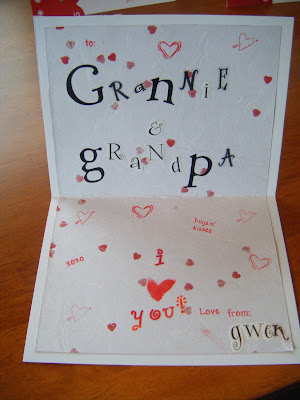 Two things I will draw attention to: the paper inside the card is scrapbook paper with a feathery heart design on it, which I cut to size and then glued on (and then stamped with my own designs as well). Secondly, the alphabet stickers, which were my favourite part. I bought more than a dozen different 'fonts' of stickers and mixed them randomly together. I like to do that because if you start out with no intention of making things uniform and ruler-straight and perfect, then it won't look glaringly awful when things don't go according to plan. I think in the end, the random letters sort of mimicked the way a child would write, too.


Either that, or they look like ransom notes. Moving on ... 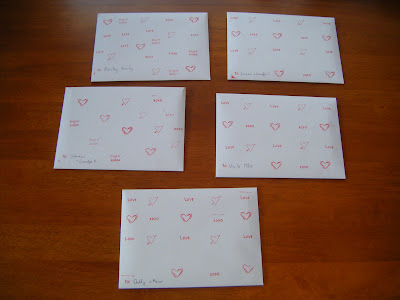 After working so hard on the cards I had to decorate the envelopes too.
I really enjoyed the project, and I think this may be something that Gwen and I can do together in the future. I've never done any paper-type crafts before, and scrapbooking intimidates the hell out of me, but cardmaking is much less stressful. I like the idea of making cards for our friends and family: it will be time spent, instead of money spent, and the cards will end up being more personal and hopefully more interesting, something that might end up being a keepsake, instead of just being thrown in the recycle bin the next day.
The only downside is that I will have to forego the use of my beloved stickers. I did the math, and these cards cost me more than $6 apiece to make, which is a little ridiculous. If I spend some money to get some good rubber stamp alphabet sets, which can be reused over and over, it will be much more cost-effective. In the meantime, I returned all the unopened stickers to Michael's and managed to walk out the door without immediately spending my refund, which is pretty amazing.
Posted by adequatemom at 8:57 PM

Email ThisBlogThis!Share to TwitterShare to FacebookShare to Pinterest
Labels: crafts

The dollar store is also an excellent place for stickers/scrapbooking and card-making supplies and in my experience, the cashiers are a lot less bitchy than the cashiers at Michaels (I get consisently bad service in Michaels and consideirng I basically pay all their salaries with the money I spend on crafts, I think they should be a lot nicer to me. heh.)

Also, my house might also be a good source of supplies because I might be a bit of a closet scrapbook accessory addict (like literally, a closet full...).

(and Claire has that sweater too!)

I am so impressed! Beautiful cards!

Ok, I totally forgive you for not knowing how to make mashed potatoes - these cards TOTALLY ROCK!!!!