Well, I didn't get a LOT of responses to the poll, but the responses I did get cracked me right up.

Kim states that "the correct answer is a) or b). a if you're not sure of the sex. b if you are," which is absolutely true. I always err on the side of caution, using phrases like "baby" or "cutiepie" or "little one" rather than making a guess as to gender. The only time I will use the words him/her or boy/girl is with someone I actually know.
Surprised Suburban Wife agrees that the problem seems largely confined to "old men in hats," who somehow still confuse her daughter Megan with a boy, despite "a pink and brown stroller - who on earth would buy that for a boy? And pink boots! And her jeans have little flowers on them!"
And finally, Nata tells a story about a similar incident where her daughter - in a pink baseball cap - was referred to as a boy. When she gently corrected the man, he responded, "Well, all babies are boys until they are older." Clearly I missed the class in Sex Ed where they covered this phenomenon, and I'm now curious about whether my sister knows her sons could transform at any moment.
No one had any guesses as to why this whole thing pisses me off so much, but no matter, as I think I've figured it out myself. Forgive me as I meander distractedly towards the point.*
A little while ago I posted some pictures of Gwen on Facebook. A friend of mine pointed out cheekily that she was wearing pink in nearly every picture. I felt the need to defend myself, pointing out that it's actually pretty hard to find clothes for baby girls that are anything other than pink: there isn't much that's neutral, and if you stray out of the pink area you're apt to end up with something covered in frogs, dinosaurs, bugs, trucks, etc. Which, one could argue, ought to be gender-neutral, but we all know they aren't. Boys get to wear gray, orange, red, and blue. Girls get pink, pink, pink, and purple. Yellow and green could go either way, depending on the garment, but the truth is that anything not ostensibly girly ends up looking boyish.
As proof: here is a picture of my daughter dressed in "neutral" colours. Even to my feminist heart, she looks like a boy. 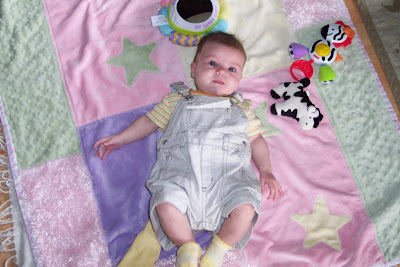 Wait. That pink girly blanket gives it away, doesn't it? Okay, here she is in the swing. Which is blue. 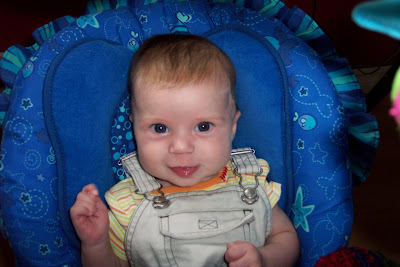 Seriously, what a cute little boy!
So, the point being, I would *love* to dress Gwen in non-pink outfits. In fact, I get very excited when the opportunity arises (such as in the pictures above). She's recently gotten some outfits that include the colour BROWN and this thrills me to no end. I dread the day when Gwen discovers (and then no doubt embraces) the Disney Princess phenomenon. I don't like the fact that I have to define her through her clothes right now. But those are The Unwritten Rules of Baby Clothing, and most of the time I obey them - my choice in snowsuits notwithstanding. 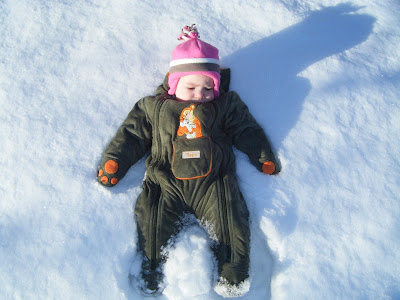 I guess what irks me is that even when I do obey The Rules, I still get the stupid comments from the Great Unwashed (Elderly Hat-Wearing) Public. It seems so unfair. No matter how I dress her, I'm either defending my choices to my feminist heart (and my feminist friends), or I'm trying to persuade some foolish old retiree that yes, she actually is a girl. Or both.

The ultimate revenge, I suppose, would be coming up with a witty comeback that calls into question the sexuality of the Elderly Hat-Wearing Man, such as mentioning that the he looks a lot like Gwen's grandma, or something. That ought to make for some awkward conversation!

*Come to think of it? What a GREAT name for my blog.
Posted by adequatemom at 4:27 PM

Serious comment first: Why do you need people to think she's a girl? She doesn't care that she's a girl.

Funny comment second: The guy who thinks all babies are boys until they get older cracks me up. This makes me think of my cousin, who made it clear to me once that all dogs are boys (and speak English) and all cats are girls (and speak) French. For the record, he was an adult at the time he told me this (he's ten years older than me).

I guess it's the assumption that bothers me. I know she's very androgynous-looking right now, and I'm fine with that. I would be *thrilled* if everybody assessed her looks and clothing, were unable to draw a firm conclusion, and thus played it safe with "what a cute BABY" until I illuminated them. But they don't. They just decide she's a boy. Because all babies are, until they get older.

I like the story about your cousin. How did he think the animals reproduced?

I think the dog/male versus cat/female thing was more of a philosophical statement than a realistic one. I believe the point was that gender is abstract. We tend to ascribe masculine traits to dogs and feminine ones to cats.

I wonder if, on some subconscious level, people think it's better to mistake a baby girl for a boy than it is to mistake a baby boy for a girl. Because all women secretly wish they were men anyway, right? Obviously.

Sorry, that was me. Sally.

Oooh, you make a good point. I can see the mother of a son getting MUCH more pissed off about her son's masculinity being called into question. It's much worse to be a "girlyman" than a "tomboy", isn't it? That's a whole other interesting discussion!

But I would STILL like to know what these people have against simply hedging their bets and calling the baby "cute baby" until they know for sure.

TOTALLY going to dress Megan like a boy and pose her doing boy things and see just how androgynous (i.e. male apparently as per old man in hat theory) she can look.

And it pisses you off because SHE'S A GIRL. And strangers are making assumptions about you and your baby. And you have your whole life resisted being classified according to a specific assumed box? That one may be stretching, but for me anyway, that definitely plays into it.

Bah! I don't know what happened to my old post...I responded to the poll too! It magically disappeared.

I chose (a) because I have been in situations in public where I really couldn't tell for sure so I didn't want to offend...I could have taken a good guess and probably have been right, but I'm not one to chance it.

I would be totally upset too! Why? Because she's a GIRL! I am not into pink and lace but if we ever have a daughter I will probably succumb to the need to dress her head to toe in pink for the same reason.

And...for the record...Gwen totally looks like a girl in that pink outfit you had her in!?

I also think that the reason I get so upset is it feels as if my girls' identities are not being taken seriously. When that man told me that all babies were boys until they are older, it made me angry, because it felt as if he was dismissing my daughter and females in general.

Does that make sense?

Tell them that she was born a boy and that you gave her a sex change to be a girl, because that's what you really wanted in the first place....went for the circ and just lopped a little more off...

That oughta shut 'em up!!

I'm with Nata, dismissing all babies off as boys pissed me off.

I don't really care if people think Claire is a boy, or Callum a girl (which happened a great deal more often than the Claire-Boy assumption) although I do like to gripe about it - does that make sense?

As long as they're saying my kids are cute, or well-behaved, or just generally lovely, I'm ok with the wrong sex assumption. I've actually had people say "I guess he's kinda cute...!". Kinda? KINDA? Seriously? Say nothing if you don't think they're cute, that's the polite thing to do. And let me tell you, very difficult to not say in return "well, he's cuter than YOUR baby...".

And I've also had people go on and on about how cute the kids are, look at me, and then inquire if I'm their mother. Gee. Thanks.