Gwen's visit with the Pediatrician

Yesterday, we took Gwen to the pediatrician. We went armed with a list of questions, all basically relating back to her weight gain or lack thereof. The other issues - spitting up, fussiness during feeds, painful gas - were only a concern as they related to the weight issue. As in, I wouldn't take Gwen to the doctor to complain that she cries and spits up a lot. But the fact that she cries and spits up a lot and has never gained weight adequately? That seemed like a problem. I wasn't concerned that there was something serious wrong, I just wanted to make sure we weren't missing anything.


Our appointment was for 11:30. Unfortunately, I had to interrupt Gwen's nap in order to arrive on time. Further unfortunately, we then spent 45 minutes in the doctor's waiting room. Thinking that we would be called in any minute, I didn't feed Gwen the entire time, whereas she is used to being fed as soon as she wakes from a nap. Bizarrely, she was fine; not fussing or crying, just being sweet and making eyes at her dad.


At long last we were brought in. Dr. Graybeard (not his real name) told us to have a seat, and started asking questions that I thought were very pertinent - confirming that I'd had a healthy pregnancy, that Gwen was born at term, that both Chris and I were in good health. "Is she being nursed?" he asked, and of course that is the Can of Worms. I explained about the norovirus, and the disinterest in nursing, and the subsequent dip in supply and the failure to come back from that despite the full dose of Domperidone. "We've been supplementing with formula pretty much her whole life," I said. "But even with that, she doesn't seem to gain weight properly. I think it's because she spits up a LOT."


"Put her up on the table and take her clothes off," he instructed, and I did so. As I took off her pants, Gwen started to cry. "Oh, the table's cold, isn't it?" I sympathized. Well, not much to be done about it. Dr. Graybeard took off her diaper, plopped her on the scale, took her head and length measurements, poked her here and tapped her there, then indicated he was finished with her. Throughout, Gwen screamed at the top of her lungs. I put a new diaper on, got her dressed again, and sat down to nurse and listen to what the doctor had to say.


"Well!" he began. "You've got yourself a grumpy baby. I hope you know, this is going to be her temperament for the rest of her life. Some babies are sweet and charming and easy, and everyone wants to hold them, and some babies just aren't. That's the kind of baby you got. She's just a grouchy, difficult baby. You just have to accept that, she's always going to be that way. Any little thing - change in temperature, being exposed, seeing a strange person, whatever - she's going to scream about it.


"Her weight is fine. She's right here on the 25th percentile, no problem there."


I piped up as this was something I really wanted clarification on. "She was born at the 90th percentile. Doesn't she need to stay on that line?"


"No, not at all. As you can see, she's stayed consistently on the 25th percentile since she was one month old, and that's absolutely fine. There's no problem with her weight."


"Alright," I said. "Now, I was told that I should keep an eye on her weight, which I've obviously done, and that I could start to wean her off the formula as long as she was continuing to gain properly."


"You just don't look like a good nurser, and you just have to accept that. You can't do it. You're a big woman, but I just don't think you have it in you."


"So you think I should just ... just keep supplementing her with formula."


"Alright." I sighed. "Well, I guess she's still getting some benefit from the breastmilk I am giving her, then."


"Well, at this point, it's arguable. Up to two months of age, you are giving her all the antibodies from everything you have ever been exposed to. After that? It's arguable. Breastmilk isn't really any better for her than formula, at her age."


Rattled, I turned to Chris and asked what other questions we had on the list. Chris started asking about Gwen's spitting up. "Well, she's just got a lot of gas, that's all. She's just a grumpy, gassy, difficult baby. Some babies are like that." We asked about a formula I'd recently heard of that billed itself as being more easily digested. He had nothing to say. Chris mentioned Ovol, and Dr. Graybeard went off on a rant about how Ovol is about as effective as waving a magic wand. "If you want to spend the money and believe the dream, go ahead," he smirked. "I've been in the pediatrics business for 35 years, you know, I've got a gray beard here. And during that time, I see things come and go. They don't really have any effect, they don't really have any place in the world of respectable medicine."


And that was pretty much it.


It took me nearly a day to process all of this, and here's what I think about Dr. Graybeard and his proclamations:


I think he is an ass. An abrasive, offensive, ignorant ass.


But the whole story just wouldn't end right without a little mocking, so let's dig a little deeper.


Dr. Graybeard says: "Your baby is grumpy."
Well, yes. We woke her early from her nap and then didn't feed her for over an hour, then took her into a cold, unfamliar place and took off her clothes. Wouldn't you be a bit grumpy? There's a vast difference between grumpy as a mood and grumpy as a personality trait, don't you think?


Dr. Graybeard says: "Her weight is fine."
I'm inclined to believe this one. He may have a bad habit of disgusing his opinions as medical fact, but it's hard to be subjective about numbers on a scale and on a growth chart. If he says it's fine, then I think it's fine, and if we're all wrong and she slips for a couple of weeks it's not going to be a matter of life and death the way it was when she was a wee little thing.


Dr. Graybeard says: "You're a bad nurser, and you can't get her off formula. Oh, and by the way you're fat."
A bad nurser? Thanks. I love the way you phrased that. If I'd been here two months ago, I would still be in tears 24 hours later. As it is I'm very unimpressed with your desire to summarize my entire nursing experience with just a few words, and after an observation period of about 90 seconds. I have a lactation consultant visiting on Friday who seems to think my goal of getting Gwen off formula when we introduce solids is a very viable one - and she's going to be spending 2-3 hours with me, to start, so that we can figure out how to reach it. On this topic, I am willing to go the extra mile (and pay the $75) to get a second opinion.


But okay, you're right about the fat part.


Dr. Graybeard says: "Breastmilk isn't any better than formula anyway."
Hmm. Then why do I spend most of my life as a new mom being beaten over the head with the Exclusive Breastfeeding for Six Months stick, then? Why not Exclusive Breastfeeding for Two Months? Did the World Health Organization not clear their latest recommendations with you before releasing them to the world? Or is the WHO one of those snake-oil organizations who just sells stuff we shouldn't believe anyway?


Dr. Graybeard says: "Ovol is a placebo."
Chris later asked me, "How the hell can a placebo have any effect when the person you're giving it to doesn't even know what you're doing?" Good point. One day last week I accidentally missed one of Gwen's Ovol doses, and we decided to just let it be for a while, to see if she still needed it. 36 hours later, in a storm of fussiness and flatulence the likes of which I hope you never witness, we were rushing for the Ovol. Yes, she needs it. Most effective placebo I've ever seen.


Needless to say, we won't be keeping this guy on our speed-dial.


Some pictures of our grumpy baby: 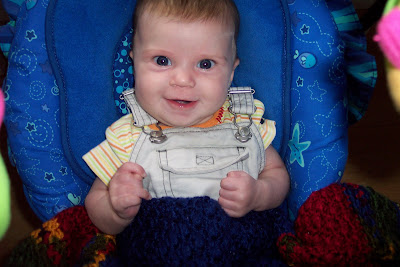 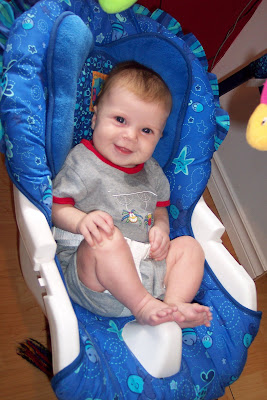 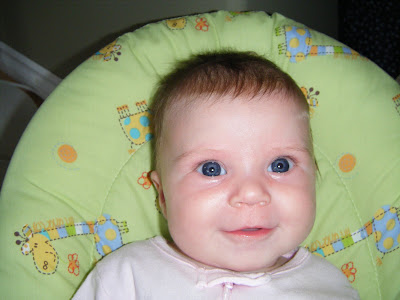 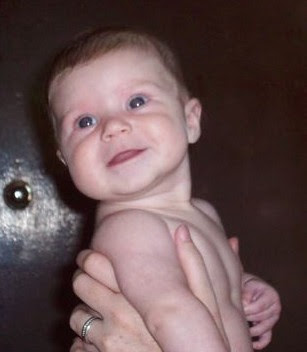 OMG! what an ass! And you know I don't swear, but honestly could he have been more rude?

oh, and your cranky baby sure is cute these days!

You are the bomb as a mom! Don't let him get to you. I wish I could tell you this will be the last time somebody treats you like that, but at least I CAN tell you you don't deserve it. Hugs on y'all

I've said it before and I'll say it again, Doctors don't know shit about nursing....

I'm so angry reading this post - I'd file a complaint with the college of physicians....seriously.

If you can, try to forget that visit ever happened....

I am surprised you just didn't get up and walk out.

Should have responded with "Really, kind of like how some Doctor's are just arrogant pricks?"

I agree with reporting him.

I think he should have given you a firm indication why the spitting up and whatnot wasn't something like acid reflux. Explained to you why he was able to just declare that she's a sensitive girl.

Because from the time I've spent with her, she didn't seem grumpy. Honestly, to me, she seemed unsatisfied, like she wanted more to eat, and they like she had tummy pains. Decidedly not grumpy. So I would have liked some concrete reasons why some of the thoughts on what might be wrong weren't. That said, its not like you can go back and talk to the guy.

In my very limited experience, Ovol worked for gas. When it was clearly gas, it worked like a dream. When it wasn't gas, didn't do a damn thing.

But then doctors will try to tell you that all the symptoms we see for teething are in our heads, too.

I TOTALLY agree. Report his ass. If those are real quotes, then he needs a slap upside the head.

Even better: don't use "graybeard" tell us his real name. Why protect his privacy? He's an asshole. Tell us his name and office location and let us call/email/write and report him.
Please?