Excuse me while I get Shmoopy

Well, it's happened three times in a row, so I am going to call it official: Gwen no longer hates the bath.
I suspect she has a ways to go before we can apply such words as "enjoyment" to the experience, but she no longer cries or screams while in the tub. The last two times, she has cried only upon being removed from the water, which I think is because she's cold when the air hits her wet body. I'm doing my best to get her warmed and bundled up asap, but in the meantime I am just thrilled that bathtime involves only 60 seconds of banshee practice, instead of four solid minutes.
In general, life with Gwen is improving greatly. I am head over heels in love with her, much more so than I was when she first entered our lives. I think the intense motherlove I've read about kind of missed me at that time, because I was so sick with the stupid norovirus, and then terrified about her failure to gain weight. Now that every day is no longer a struggle to stay alive, and especially since Gwen is becoming more of a person every day, I am just so filled with love and joy and gratitude for this amazing relationship. Her personality is really starting to shine through, and other than the times when she's genuinely in discomfort (which still happen more often than I'd like, but that's a subject for another day) she is a truly charming little girl. So alert, so interested in all the people and events around her, so easy to get along with. Sometimes my heart actually hurts with how much I love her.
Some important anniversaries happen this month, which I mark simply with a quiet smile and a bit of reminiscence. The anniversary of Gwen's conception was August 7th, and the anniversary of me finding out I was pregnant is coming up on August 24th. Both of these days are so clear in my memory. I remember calling my sister to share the news, then my best friend, who helped me figure out a fun and creative way to spring the news on Chris (who was out of town that weekend). I remember picking blackberries and snuggling with Fritz, whom I was dogsitting that weekend and who seemed more attentive than usual - could it be he had a primal animal sense about my new state?
It's amazing that this new little person, this cheerful and beautiful little girl, has existed for a full year now. It's incredible that we made her, that we brought something new to the world that wasn't there before. I hope I never lose that sense of awe and wonder. 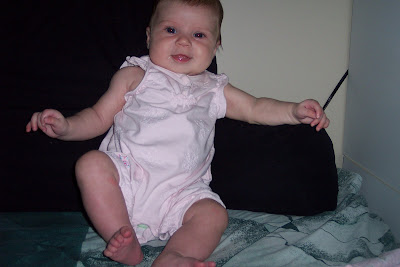 Posted by adequatemom at 3:35 PM

You never lose the feeling. It just grows and grows.

You know, I never really considered that the girls have existed for a full year. Very cool point!

I think I'm going to change my claim that things change at 3 months. I'm thinking its more like 4 months. I'm more in love with her every day. It's true, it does just grow and grow. I'm always amazed with the love I feel for Sir Callum.

Aww. She is a beautiful little girl. Your readers dig it when you get Shmoopy. =P