Gwen outgrew her first outfit this week. Some of her onesies were already put in the too-small category once we started putting her in cloth diapers, as they are way bulkier than disposables, but she has now outgrown some of her sleepers on her own merits, since she is such a long baby.

The first sleeper to be officially outgrown is this one - shown below when she was two weeks old. 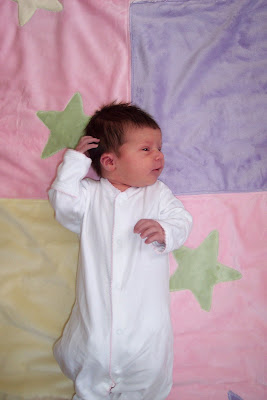 This is one my mom bought for her at the fancy-pants Dream with Me store downtown. I won't tell you how much it cost, but I will tell you it is softer than an angel's pet bunny rabbit, and that I'm saving it in the Mementos box.

Speaking of Gwen's clothes, being on the tiny side finally came in handy this week at drop-in when one of the other moms had an adorable baby gap hoodie to give away, because her daughter had outgrown it really fast. The other moms were sorry, but their daughters were already over 14 pounds as well, and so probably wouldn't get any use out of it. So Gwen scored it! It's lovely, too, and best of all - IT'S NOT PINK. I didn't even realize how pinked out I was getting until she handed over this lovely, chocolate-brown hoodie. Yes, it has a big pink flower on it, so it's still girly, but oh my - what a nice change. I put it on Gwen the very next day, and it's still a bit too big, so we ought to get some good wear out of it.


Speaking of the drop-in (man, I am ON FIRE with these clever segues tonight), going and hanging out with other moms and babies totally influences how I dress Gwen. More than once I've heard another mom comment that "[baby] doesn't wear just *anything* to drop-in." Yes, for some of us it is the only chance to get out of the house, and naturally you want to dress up your little one and show them off and maybe have a conversation starter ("Hey, what a cute outfit!"). It was about five or six weeks ago that I looked around the room and realized Gwen was the only baby still dressed only in a onesie, so I started putting pants on her. They looked utterly ridiculous, as you can recall. 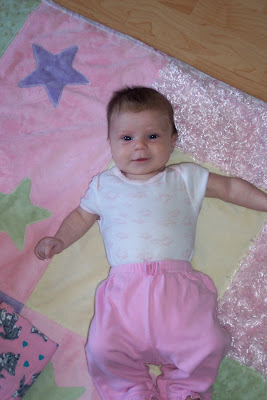 But the madness didn't end there. Other babies don't only wear full, co-ordinated outfits to drop-in - they wear FOOTWEAR. Now, I have a huge box of shoes of all sizes for Gwen, but ... well, I thought they were a little silly at this stage, to be honest. She's not walking anywhere, why does she need shoes? To protect her tiny toes from falling anvils? No luck there, they aren't steel-toed. But in any case, last weekend I tried out the look and Oh. My. GOD. she looks adorable. 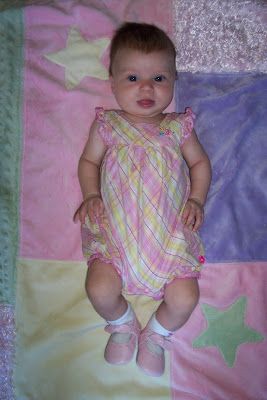 Up till now, Gwen has been in her 0-3 month clothes, but the other day I went through the gigantic bin of 3-6 month stuff and pulled out a few things I think will fit her now. I got really excited about the variety of colours and styles - perhaps a bit too excited, actually. Today, I dressed Gwen in "new" overalls and a colourful onesie, then stepped back to survey the look.

Yeah. This is my daughter, dressed as a boy. I guess I can't get annoyed with friendly strangers who comment on how handsome my son is, because dammit, she IS handsome. 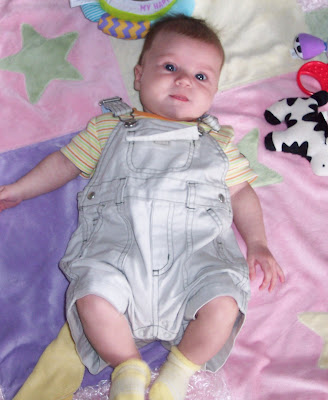 You know, I think if I'd had a boy I would take the chance of dressing him in slightly effeminate-looking clothes, just once when he was this age, to see if he would pass for a girl as easily as Gwen passes for a boy. Some babies really look like boys or like girls, but Gwen is pretty androgynous, at least at this point. I'm weirdly intrigued by that. 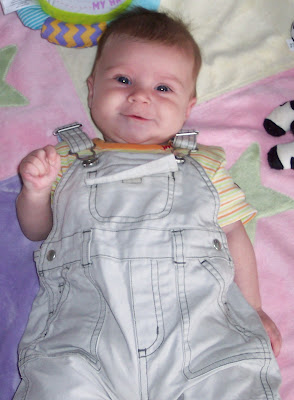 Please also note that she doesn't care in the least that she looks like a boy, and is as happy as ever.
Posted by adequatemom at 9:03 PM