3:30pm - Sally suggested a shower, feeling that it would help me relax enough to dilate further. I didn’t want a bath since I was afraid of lying down in the tub and not being able to get back out again – also, since I was so warm, the idea of being submerged in hot water was not appealing. But the thought of the hot shower on my back was attractive, so at about 4pm I got in the shower. Also by this time, I was not able to relax my ladyparts adequately in order to pee, so Janice suggested that peeing in the shower might be easier.

Chris came with me into the shower, not that I would let him have any of the hot water. He let me lean on him during the contractions while the water poured onto my back. I told him I was sorry, but that I was going to have to pee in the shower. This was important because we are not the kind of couple who talk about or witness each other's bodily functions. For the most part, we pretend they don't exist. Clearly, things had changed.

During the shower, I told Chris that I was having trouble letting go of being a hostess and trying to take care of people. It seemed that all I needed to do to start letting go, was to voice that.

Just as we were running out of hot water, I threw up in the tub. 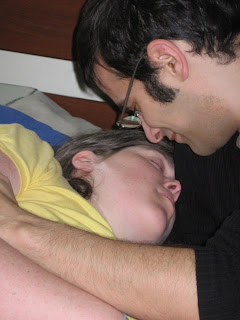 4:30pm - When I got out of the shower, the contractions were really strong, and Sally started timing them. They were about a minute long and 3-4 minutes apart. There was a big shift – I stopped caring about my naked body and I just went into my own little world. We spent about half an hour on the landing, singing songs and timing contractions. Sally soon suggested calling Lillian back – she showed up at 5:00, just as we finished singing “There was a great big moose.” Sally commented later that she expected Lillian to show up and just change the entire dynamic, take over the room, but she did no such thing. She fit perfectly into what we already had going on, observing quietly for a while to see what was happening and figuring out how best to assist.

5:15pm Lillian checked me again – I was 3 cm and I was so, so sad. I really wanted to be closer. Someone suggested that the hot water tank might be refilled by now, so Chris and I went back into the shower. During the shower, I was feeling really upset – the contractions were so strong and so close together already that I felt I was barely coping with them, and I knew I had a long ways to go yet. I was really starting to doubt my ability to cope without pain medication. In fact, during contractions I started to fantasize about an epidural. I still didn’t want to get one, since it would be bad for the baby, but I imagined what it would be like if I could get one.

“This is really hard already, and I don’t know how much harder it’s going to get.”

My water must have broken in the shower this time, though no one noticed and we only figured this out after the birth. Chris and I once again got into a rhythm of how to cope with the contractions, while Sally sat outside the bathroom and timed them just from the sounds of my breathing and vocalizations. Chris and I talked briefly and decided that I wanted to have laughing gas when we got to the hospital – I really felt I needed help, and I knew that laughing gas would not pass through to the baby, so I felt okay about doing that. We got out of the shower and Chris told everyone that this is what I wanted to do. Lillian suggested that we hurry along to the hospital, then, since it would take time to get there.

I actually did think about walking to the hospital (it’s only a five-minute walk, when you’re not in labour), because the idea of sitting in a car was so very unappealing. However, after having one contraction at the top of the stairs, one contraction on the landing, and one contraction at the bottom of the stairs, this idea was quickly abandoned. It would have taken me five hours to walk at that rate! I had two or three more contractions on the way to the car – I remember holding Janice’s arm as I was a little dizzy. Chris scurried around getting the hospital bags into the car. Sally went in Lillian’s car while Janice rode with Chris and I. I had one contraction in the car on the way to the hospital – Janice somehow nearly climbed over the front seat to put pressure on my back during it. Apparently we were stuck behind some ridiculous old man driver, too, but I had no idea.

“Have a really dramatic contraction when we get to the admitting desk, okay?”

I had a contraction up against a large concrete pole in the parking lot, then we went into the emergency admitting desk. Lillian told me I should have a really dramatic contraction once we got there. “No problem!” I thought. As I walked in, I saw a Mom with two toddlers in the waiting room, and thought “I need to be dramatic enough to make admitting hurry, but not dramatic enough to scare the kids.” Surprising how your mind takes in these little details. A moment later, the contraction hit and I leaned against the wall next to admitting. Someone rubbed my back. Afterwards as we made our way past the kids, one of them said to his mom, “She’s upset,” and his mom said, “She’s going upstairs to have a baby.”

We made our way down the maze of hallways and into the elevator. When we walked into Room 4, there was this incredible moment of recognition and excitement – “This is the room where my baby’s going to be born,” I said. I felt so filled with happiness – I felt like something was happening outside of my own body, that this was real.

After that, I really stopped talking and interacting with the other people in the room. Someone put my CD on, someone adjusted the bed to the position I needed, someone readied the gas and taught me how to use it, someone took off my clothes without me even realizing what was happening, and my body kicked into high gear.

The gas was helpful, but I had to time it right. I had to get the mask on the second I felt a contraction starting, getting ahead of the pain, because if it was a second too late it did nothing. I took two or three deep breaths of gas at the beginning of each contraction and then went through the rest of the contraction on my own, because taking any more gas made me feel like I was going to throw up. I learned later that most women using gas use it for the whole contraction (or sometimes, even in between to help them relax) and that Lillian was impressed with my fortitude and restraint. It was really just my desire not to vomit anymore that made me look so strong, though.

Someone was applying constant pressure to my back. Someone passed me water in between contractions – a space that was becoming shorter and shorter. Someone handed me the gas mask at the start of each contraction.
7pm(ish) - I said urgently, “Something feels different, I need to push.” Lillian checked me and told me I wasn’t at 10cm yet, so if I could help myself I should avoid pushing – but if I needed to, then there wouldn’t be any stopping it. I tried for a couple of contractions not to push, but it was a losing battle, so I started pushing without really telling anyone what I was doing. They weren’t hard pushes, just pushing back against the pressure hard enough to attain some kind of equilibrium.

When I started talking about pushing, Chris was so excited – he looked at Sally and said, “Is this transition?” He was stoked! Some time later, Lillian told us that the last lip of cervix was gone and I could push (little did she know I’d already been at it) – a different kind of pushing started at this point.

I don’t know when this happened – maybe during the crowning – but I remember thinking to myself, “I think I’ve changed my mind. I don’t really need to have a child! Can we just never mind all of this?”
Posted by adequatemom at 12:19 PM

Oh dude, you're killing me. I can't wait for the next installment!

Even though the hours on the clock seem to say it went fast, I can see how it wouldn't feel that way. I will probably read this several more times before you post the follow-up chapter...so good! Thanks for sharing!

The Moose Song! (yes, I latched onto the one thing that's ALL ABOUT ME, in your birthing story. THAT'S JUST WHO I AM, OK?)

I'm loving this! I'm amazed you remembered so many details.

Give me the third volume by tomorrow when I get home from work or I will be out of my mind with impatience. Give it to me!!!