The part of parenting that I never gave much thought to, before deciding to jump on in, is the part where you might sacrifice whatever other plans you had on a given Saturday night to instead Google "fever seizure".

Yeah, not exactly a ringing endorsement for procreation there, is it?

It's all part of the package.  Chris and I were watching a movie when we heard Gwen whimpering upstairs.  We both rushed to her room; by the time we got there, her whimpers were verging on shrieks and she was tossing (convulsing?) on the bed.  My reassurances went unheard, and as I reached out to her she pushed me away, fighting me off with her arms and continuing to flip around on the bed.  Chris took a turn, and he was finally able to still her.  Whether she was actually awake or not, we still don't know.

Was it a seizure brought on by the low-grade fever she'd had that day?  (She spent most of the afternoon snoozing on the couch, not complaining but certainly not quite herself.)

Was it a night terror, perhaps made more intense by her slight fever (delirium)?

Or were my worst fears coming true and she had been possessed by Pazuzu?

And how did I become the person in charge of figuring this stuff out?  I'm really not that grown-up.

We soothed her and gave her some Tylenol to reduce the fever.  She went right back to sleep - in my bed, of course, because I wanted to be there if anything else happened.  Nothing did, and the next morning, she remembered nothing.  Her fever was totally gone and she was her usual spirited self.

Of course, it takes me a little longer to bounce back, both from the feeling of helplessness I felt while watching her flop around on the bed in terror, and from the delightfully unrestful sleep I got with her feet in my face for the rest of the night. 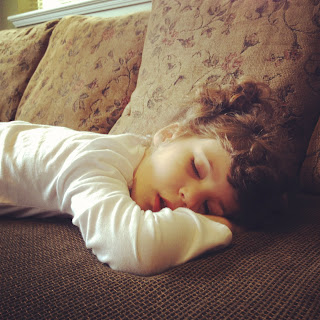 She remembers nothing, but meanwhile we're the ones who worry now at night.  Hope this never happens again.
Posted by adequatemom at 7:30 AM

Febrile seizures have some pretty obvious signs... lots of drool and loss of bowel and bladder control (though if she's still wearing a pull-up to bed...) and also rapid eye flicking. But it sounds as though you have it all under control! Scary, I bet, but you're doing a good job.

Sounds a little like the night terrors Teagan would get when she was younger. Thankfully, she doesn't seem to get them anymore. One night I went into her room and she was standing in her crib, facing the wall, screaming in terror. It was surreal! I picked her up, but she wouldn't settle until I took her out into the living room with more light and noise.
According to our pediatrician night terrors are a sleeping disorder of young children and generally harmless (other than freaking out the parent). If they become a regular thing, there are some things you can do, such as disrupting their sleep cycle prior to the onset of the night terror.
I'm glad to hear Gwen has bounced back just like little kids do after scaring their parents.