A couple of weeks ago, during our morning snuggle in the Big Bed, Gwen told me she didn't like her hair.
(I know!  I thought I had about ten more years before I had to start fielding that particular complaint.  But no, four years old is apparently time to start feeling dissatisfied with yourself, these days.)

There is a little Asian girl who goes to Gwen's daycare, and Gwen told me she loves this girl's hair and how it is "all flat like a waterfall".  She wants to have hair like this, too.

(And how clearly I remember spending many months and years wishing MY hair were as curly and voluminous as Gwen's now is.)

I told her that her hair was lovely just the way it is, but that if she wanted me to, I could straighten her hair with my straightening iron.  To be honest, I thought she'd be totally against the idea once she understood just how long she'd have to hold still.  But no - she wanted hair like a waterfall.  So she sat ever so patiently and I straightened her hair. 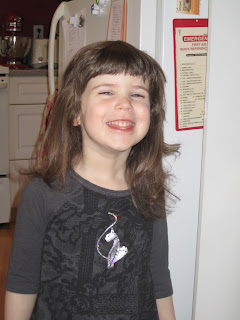 I could hardly take my eyes off her for the rest of the day.  But not for the right reason.  She just didn't look like herself.  I don't like straight hair on her.  And part of that is that it REALLY highlights the fact that she hasn't had a professional haircut in over a year - curly hair hides a multitide of sins, and sometimes those sins are at-home quick-job get-the-hair-out-of-her-face hair cuts by Dad.  Plus I just really like her curly hair.  It kind of signifies her personality (crazy, obvious, untameable).

But on the other hand, as much as I don't want her subverting her own image of herself to be someone else - a sweet, quiet Asian girl with waterfall hair - I don't want her to be who ~I~ want her to be, either.  I've got the responsibility to teach her grooming and self-care and basic rules of decency, but I don't get to tell her how to dress or how to look.  (Again, kind of thought I had another decade before pondering these things.)  In general, she picks her own clothes and I don't get in the way of that, other than making sure she is warm/cool enough and, as I said before, decent.

So my response to this is that while her hair was straight, I commented often that she is beautiful with straight hair and she is beautiful with curly hair.  I make sure to tell her each day while I comb her (now curly once again) hair that it is so lovely, and that lots of people wish they had such beautiful curls.  I try not to make a big 'thing' out of her choices.  Hopefully by the time she *is* fourteen, we will both have had a lot of practice at this attitude, and we'll be ready.
Posted by adequatemom at 9:25 AM

I think the wanting to look like their friends is pretty normal. At least, I sure hope it is! Callum wants "flat hair" like his friend Justin (and his cousin Justin, a lot of Justins in his life). Like Gwen, he doesn't have "flat" hair, he has awesomely perfect curly hair that is going to be something girls swoon over. Claire is just making friends with a little black girl in Callum's class (they instantly clicked, its so cute), so I'm waiting to see what she's going to wish for now. When I was in Elementary school there were two beautiful black girls whose dark skin was something that I longed for desperately. I thought it was SO beautiful. Humans are funny ;).

I think you're doing the best thing, just keep letting her know that she's spectacular just the way she is!