On Saturday evening Gwen participated in her first talent show.  Pretty sure it won't be her last.  She is - and always has been - a born entertainer, eager for the spotlight, ready to make you laugh and cheer.  But not quite in the way you might expect.

The talent show was a fundraiser for a church project - for the past five months, we've been raising money to build a well in a village in Malawi, Africa.  (As a side note, I'm thrilled to say that we have met and exceeded our $7,000 goal, thanks to the children's talent show which raised $300!)  We had attended practices earlier that day and the previous week, so Gwen was familiar with her roles.  When we arrived at the church for the show, she marched straight down the centre aisle and up to the microphone, where she greeted everyone with a loud but charming, "Hello?  Hee, hee!"  Keep in mind the show has not started yet - people are just finding their seats.  But trying to keep that kid away from a microphone is a losing battle. 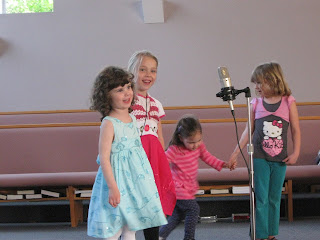 She participated in a few group numbers, including the "Hip Hop Water Drop" where she really shone.  There were four kids doing this chant, and Gwen - no surprise - decided that everyone really ought to notice how well she knew the words, so she stepped right up to the supposed-to-be-shared microphone and let 'er rip.  She was enthusiastic and adorable, and the other kids didn't seem to mind her hogging the spotlight.  Gwen's solo "trick" was later in the program: she chose to do a "gymnastics demo", aka a somersault on a yoga mat I'd brought along.  She of course did a flawless job and then took a great bow.

The end of the show was supposed to feature all the kids singing a song together.  By this point Gwen had spotted the small mirror kept on top of the organ (I guess so the organist can maintain eye contact with the pastor during services?).  The only thing more exciting to Gwen than singing into a microphone?  Singing into a mirror.  I watched as she slowly inched closer and closer, then eventually found herself singing "how wonderful you are," and similar lyrics into the mirror.  Very enthusiastically.

Although all the kids were terrific in their various contributions, I had a lot of comments from various audience members on Gwen's performance specifically.  She just has a spark.  If there is a group of kids on stage together, Gwen is the one who is going to draw your eye.  But it's not necessarily because she is on cue and on task, singing the right words, doing the right actions, and delivering a flawless performance.  No, it's because she is completely immersed in her own little world and she really wants you to join her there.  In Crazyville Valley in the great City of Narcissism.
Posted by adequatemom at 12:42 PM