We have had a really rough time with Gwen's sleep lately. The roughest it's been since before sleep training (which was just about a year ago now).

It seemed to be a combination of separation anxiety (which peaks around eighteen months of age) and the nasty cough she has been suffering since that throat infection a few weeks ago. Since our sleep training, our routine has ended with us putting her into her crib, saying goodnight, and walking out of the room. Gwen would then play with her books (we always left some on the shelf within her reach) for about 20 minutes and then lie down and go to sleep. Suddenly, when we approached the crib at bedtime, she would cling fiercely to us with all four limbs, sometimes even using our waistbands as footholds and attempting to climb up our bodies away from the crib.

If we did manage to disentangle ourselves and get her into the crib, walking away and reaching for the doorknob to exit the room earned us blood-curdling shrieks. Gwen has always been well able to express her displeasure, but this was a new kind of screaming, a scream that reached the next level. A scream to make your ears ring. A scream to make your heart break. A scream that made you turn around, walk back to the crib, pick up that child and swear that you would do whatever it took to not ever have to hear that scream again.

One night, Chris "slept" on the floor of Gwen's room. More than once, in fact more often than I can actually recall, I got into Gwen's crib with her. The two more comfortable alternatives - comfortable for us, at least - were to have Gwen sleep in our bed with either or both of us, or to have her sleep on the floor with us. She would not tolerate either. She wanted to be in her crib, but she wanted us right there with her. 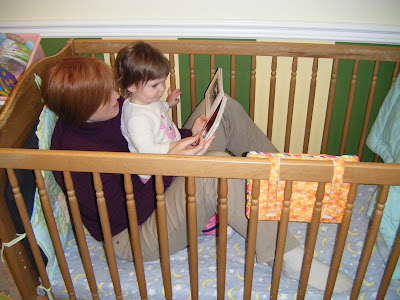 (This photo is a re-enactment to prove that yes, I can fit in a crib. This picture was taken in the middle of the day, faraway from any actual required sleep time, and was taken several days after Gwen stopped demanding that I get into the crib with her in order for her to go to sleep. Had this been an actual Nighttime Crib Sharing Experience, she would be in pajamas, she would be curled up on my chest, and it would be so dark you wouldn't be able to see any of that.)

Thanks to the lovely cushioned headboard that came with the crib bedding my mom bought for Gwen, getting into Gwen's crib wasn't actually that uncomfortable. I'd be in the same position as shown above, except Gwen would be facing the other way, snuggled into my chest. I would sit there with my back against the cushion for 10-15 minutes (I'm not sure, there's no clock in her room) and then start easing us both into a lying-down position. Once I got her lying down I'd try to move away so I wasn't touching her, but if she started crying or whimpering I'd move back. After not touching her for a few minutes, I'd start working on getting out of the crib. Once I made it out of the crib, I'd crawl out of the room on hands and knees towards the door. That way, when I opened the door and a small amount of light came into the room, she wouldn't see my leaving figure silhouetted there unless she stood up. And if she stood up, well, the jig was up and I'd have to start over again anyway.

So yeah, those were fun nights.

***
There was originally another 400 words on the end of this post, all about how we were past the worst of it and how the addition of a blanket and a giant cow seemed to have Saved the Day Night. But then? Gwen got up at 12:45am and we were all awake for the next two hours. I eventually got to sleep in my own bed - Chris was not so lucky, spending the night on the floor of Gwen's room once again. So perhaps I should not be so hasty with the celebrations and lauding the giant cow.

Posted by adequatemom at 8:05 PM

ok, I know this isn't the slightest bit funny to you, but I laughed so hard at the picture of you in the crib I almost peed... you totally made my evening!

My only suggestion would be to buy her a mattress, and then anchor everything in site to the wall. At least then I wouldn't have to sleep on the floor (it would all be about my comfort, yes). And let's face it, if I got into our crib the whole thing would collapse so it wouldn't even be an option.

The montessori folks believe a child should be free to roam their room and then sleep when they feel like it. At least, that's how I interpreted it. It might be that she is starting to feel like the crib is a cage.

That said, I think you're right and she really just wants to be with you right now.

Actually, it is hilarious to me that I got in the crib. I'm really quite surprised that I am capable of such self-sacrifice - I thought I was way more selfish than that! I'm glad you found it funny too. I had told a couple of people about the crib-climbing, and they all demanded photographic proof so that they could laugh at it. And hey, now I have something to show Gwen when she's an angsty teenager, too! Bonus.

What has worked the last few nights is to warn her verbally and invite her to "get into the crib, get comfy, and then I'll get your blanket." She is loving the blanket so this is a good incentive.

Oh, and lest you think I am some wisp of a thing who wouldn't even break my kid's crib, her crib converts to a toddler bed. And once it's in bed form, hey, I wouldn't hesitate to lie down on it with her for story time, cuddles, etc. So why not when the cage is still up? Seemed to hold me well enough.

ah, ours does no such converting... and it is pretty old, and some of the bolts don't really seem to be attached to much wood anymore.

Probably shouldn't have my child in it, come to think of it...