It's all very tongue-in-cheek, but at the same time there's a kernel (heh) of truth to it. I was thinking about this again yesterday, since it was Halloween. 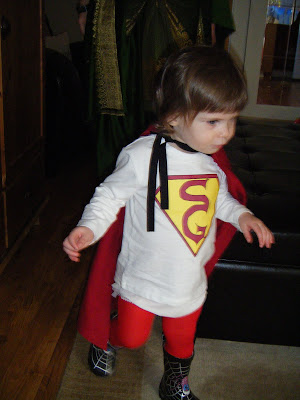 We dressed her up in the obligatory costume, totally chosen and designed by us (not her). 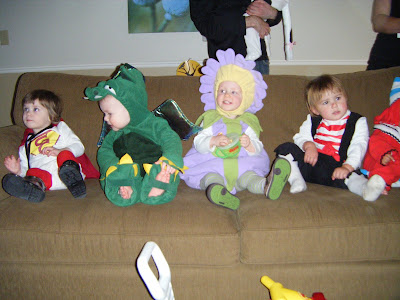 We made her sit on the couch next to the other costumed cuties for the obligatory Halloween Party picture. 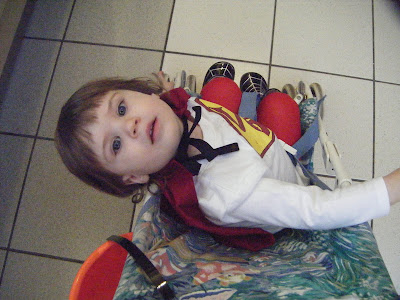 We took her out for the obligatory mall trick-or-treating, which consisted of us very infrequently wheeling her up to a mall employee, coaxing her to "say trick or treat" (which she can't and won't do), and then having a piece of candy plunked into her bucket. 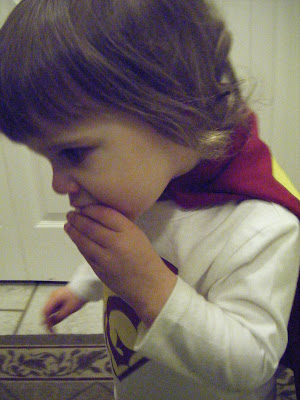 We ended up with about six pieces of candy, two of which were safe for her to eat. So we had the obligatory candy before dinner.

Did she actually care about any of this? Would she have much preferred to stay at home in her usual comfy clothes and play with her own toys rather than being hauled around from one place to another, strapped into the carseat and then the stroller and then the carseat again and being given a nearly endless stream of instructions about what she is to do and say and touch and most importantly what she is NOT to do and say and touch?

All good questions, but I don't have time to ponder them. I've got to figure out where to buy a dress for Gwen's picture with Santa. Only 53 days till Christmas!

Posted by adequatemom at 8:34 PM

Super Gwen is the Best. Costume. Ever.!! Great idea!

We're just preparing them for the realities of life. They're just going to have to get on the couch and smile. heh. :)

I got my Mom on the dress, so here's hoping I get one by the time I trudge to the mall to force them to sit on Santa's lap...