Dr. Dave and my Drunken Daughter

Longtime readers and friends of Gwen may remember that when she was an infant, we took her to a chiropractor for a series of treatments.  This was recommended by our lactation consultant, who noted that Gwen’s tension did not go away when she was being held, and that her constant screaming may be due to musculo-skeletal issues, rather than gastrointestinal ones.  At five months of age, Gwen finally stopped screaming and our lives changed drastically.  In many ways, I consider that time to be when our lives as a family really began – when Gwen was freed from constant pain and was able to begin developing her personality and her interactions with the world.

I’ve taken her back on a very loose schedule since then for check-ups, probably once a year or so.  I decided the time had come again this past week.  I also wanted Dr. Dave to look into what I see as a lack of physical co-ordination.  I have seen Gwen go from standing still on a flat surface to falling down, with no provocation whatsoever.  I have also seen her bump into our walls and furniture on a weekly basis for years – walls and furniture that have been in the same place in our house for her entire life.  I have been wondering about this for a while, and even Googled “five year old daughter acts drunk and falls down a lot” – which led me to the Wikipedia page for dyspraxia, where I found out that…

Issues with gross motor coordination can include the following:
·  Poor balance (sometimes even falling over in mid-step). Tripping over one's own feet is also common.
·  Difficulty combining movements into a controlled sequence.
·  Difficulty remembering the next movement in a sequence.
·  Problems with spatial awareness, or proprioception.
·  This disorder can cause an individual to be clumsy to the point of knocking things over and bumping into people accidentally.  People with dyspraxia may also have trouble determining the distance between them and other objects
In addition to the physical impairments, dyspraxia is associated with problems with memory, especially short-term memory. This typically results in difficulty remembering instructions, difficulty organizing one's time and remembering deadlines, increased propensity to lose things or problems carrying out tasks which require remembering several steps in sequence (such as cooking). However, many dyspraxics have excellent long-term memories, despite poor short-term memory.

This may manifest itself as an inability to tolerate certain textures ... including oral toleration of excessively textured food (commonly known as picky eating).

All of these things are things we have noticed with Gwen.  We often laugh about the fact that Gwen has been toilet-trained for over two years, but needs to be reminded EVERY TIME that flushing and washing hands are part of the sequence of that job.  (This despite the fact that there are pictures on the bathroom wall showing her each step.)  We are also gobsmacked by Gwen’s inability to remember what Mom or Dad just said, in contrast to her propensity to out-of-nowhere recount a conversation we had several months ago, and what she said and what we said and where we were and what we were wearing and what show we watched later that day.  And don't get me started on her eating habits.

Anyway, whether there is something a little different about Gwen or whether this is just a bad case of Google paranoia is yet to be seen.  But her visit to Dr. Dave was quite enlightening.  He has a little boy about the same age, so he was able to put her at ease with his questions about Dora the Explorer and other relevant topics.  After she was comfortable, he began his examination, and soon discovered a few issues.  As he moved her head and arms around, he used a silly voice to point out to me the things he was seeing – “Oh look Mom, I can turn my head waaaayyyy over here on this side, but then on the other side it only goes to here!  Isn’t that funny?”  Of course Gwen found this hilarious and was giggling the whole time.  He then asked her to stand up and walk across the room towards him while he looked at her gait.  She did this three times: once in a ‘normal’ gait, once pretending to be a tightrope-walker and walking with front heel touching back toes, and once with eyes closed.  Well, more accurately, he asked and pleaded and begged her to do it with eyes closed, but she probably only took a step or two, with her arms pinwheeling madly.  She just couldn’t do it.

Next, he read a few sequences of numbers to her and asked her to echo them back, which she did without difficulty.  Then he sat down to tell us about what he’d found.  Looking directly at me, he said, “I see what you mean, mate,” (yes, he’s Australian, that’s how he talks and it’s totally charming).  “There are definitely some things going on that are not age-appropriate.”  I can’t tell you how validated I felt in that moment!  I am quite used to being “blown off” by any number of people when I bring up Gwen’s various quirks and foibles – “she’ll grow out of it,” “it’s just her age,” “she’s just like that,” and so on.  And maybe all those commenters are right, and I am sure the comments come from a place of love and compassion, but … I don’t like being blown off.  I want someone to see what I see, and to wonder about it, and to investigate whether it could be better.  And that’s what Dr. Dave did.

(As a side note, mothers with screaming miserable babies get blown off a lot too.  “Babies cry!” and “She’ll grow out of it,” were certainly things I heard a lot as a new mom – and as a new mom, I didn’t know any better.  Now I do.)

Dr. Dave continued: “Sometimes co-ordination issues like this are associated with auditory processing issues, which is why I did that test with the numbers.  When this problem is present, kids can hear fine, but they can’t process and use what they hear.  I don’t see that problem here, she seems fine on that.  But there is definitely some chiropractic work to be done, and we should be able to see some improvements.”

He did a couple of adjustments on her, one of which improved her ability to turn her head from side to side (which he demonstrated afterwards).  He indicated that there was more to be done, but that he didn’t want to push too hard with her in the first session, and we should come back in about a week to continue the treatments.  I am happy to do this: my benefits pay for a good portion of the fees, and he did the work to make Gwen comfortable with his treatments, so there is very little “cost” to this and potentially a significant benefit.

When I told all this to Chris later, I got validated all over again, as he asked whether we should be seeking help from other professionals about a confirmed “age-inappropriate level of physical co-ordination”.  I feel at this point that we should continue with Dr. Dave and see how far chiropractic treatments can take us.  If at the end of that we feel there is still a significant problem, then we can look into other solutions – Dr. Dave may even be able to make suggestions about where else to go.  But for now, we will stick with this treatment and see what happens. 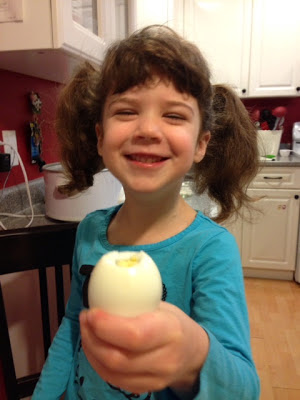 Email ThisBlogThis!Share to TwitterShare to FacebookShare to Pinterest
Labels: chiropractic

It sounds like you may be onto something, and like so many things with kids, the earlier a problem is identified, the more thoroughly it can be erradicated. If you would like more input. The OT's and PT's at the child development centre are wonderful for assessing kids. It's free, you just need a Dr.'s referral. They do some wonderful things with kids with this problem using a series of techniques called Sensory Integration. There could be a waitlist, so you may want to get that referral from your doctor sooner than later, so that you're ready to go if you find what Dr. Dave is doing has reached a limit, or if you're just curious about further assessment. You probably want to get this sorted before school starts because there are impacts on learning, if Gwen does have dyspraxia, or something like it. Mom's know when things aren't right, even if we don't have a name for it.

Laura, I agree with Sue on looking into PT and OT at your child development center.... it does sound like sensory integration dysfunction, all 3 of my kids have this, many of us as adults as well ...textures, temperatures, sock seams, clothes tags, noise levels etc..
Carol Stock Kranowitz has a book called the out of sync child, check your local library :)