It turns out that if you are in a blah and stunned mood due to death in the family and impending poverty, and as a result you just kind of ... delay the beginning of the Christmas season until, say, the last weekend before Christmas, well, there's a lot you need to pack in to that weekend. Fortunately, it somehow turned out to be a REALLY FUN WEEKEND.

Let's see. Friday night, Gwen went to get a hair cut and then visited Santa. She was still shy, as we expected, but she was willing to interact with the guy. The first several minutes of the visit involved me kneeling near her, as she stood just out of arm's reach of the most patient Santa in the UNIVERSE, and he gently coaxed her to step close enough so that he could touch her nose and make it glow red like Rudolph's (which would, through Santa Magic, prove that she had been a good girl). She kept holding up MY hand for Santa to take instead of her own ("Do it to Julia!") but Santa continued to insist that the trick only worked on small people. Finally, FINALLY, he managed to touch her and she noticed that the world didn't end, and then she was entirely happy to climb up onto the arm of the chair and "pose" for a picture. She didn't really talk to him or say what she wanted for Christmas, but I was proud of her anyway. I think the picture is both adorable, and a perfect representation of her personality. 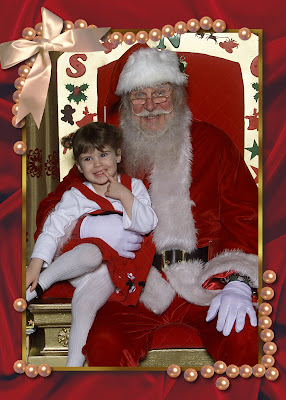 Incidentally, for reference, here are the Santa photos for the past two years, which evidently I never blogged before (?). As you can see, Santa is hiding behind the chair so Gwen is utterly unaware of his presence.

We then rushed home, where I fed Gwen and put her to bed and Chris drove to pick up the babysitter so we could go out to a Christmas party. We had a great time at the party, relaxing and chatting with good friends. Wonderful way to spend the evening!

On Saturday, we decorated our tree. This was less idyllic and more frustrating than anticipated - despite Gwen's repeated requests to get "a Santa tree" and decorate it, she wasn't all that interested in actually helping. She enjoyed taking the ornaments out of the box, commenting on them, and putting them on the table. She occasionally deigned to actually put one of them on the tree. But mostly it was Chris and I scrambling to keep up with the ever-growing pile of ornaments, in between urging her to be CAREFUL, some of those are VERY BREAKABLE! In any case, the tree got decorated and it looks lovely and we have several pictures which capture all the fun and none of the frustration, which is all that will matter when we look back on it. Gwen even seems to be taking seriously our instructions that "if you take the ornaments off the tree, Santa won't come". Score one for Santa! 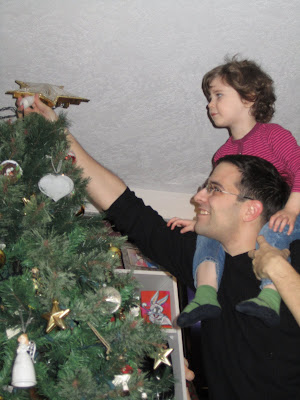 Saturday afternoon, Gwen and I made sugar cookies. This was mostly in response to my realization that Santa will, of course, need sustenance in exchange for gift delivery. And Gwen loves to help make cookies. And Chris suggested sugar cookies, because then you can decorate them to DOUBLE the fun! (I notice that he makes these suggestions and then disappears ...) We did have fun baking cookies, and I was pleased to notice that Gwen is getting ever-better at following directions. I think I am also getting better at breaking things down into very small, manageable steps, and at not stressing when things are not perfect. The little incident where she knocked over the non-pareils (who the HELL invented round sprinkles, and did that person hate parents?) had me gritting my teeth a wee bit, but we managed. 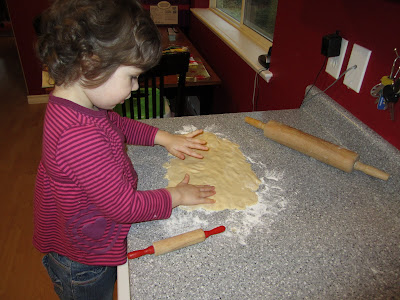 On Sunday, I went to church by myself so I could actually listen to the sermon and participate in the service. Surprisingly, this is the first time in Advent I have been to church. It's just been a weird month. While I was at church, I found out about Carolling Nanaimo which has me all excited. I am hoping to participate in it this week.
Then on Sunday afternoon we went to see Panto in the Jungle. For those who are unfamiliar with panto plays, they are typically performed during the Christmas season, and are goofy, over-the-top comedies involving lots of song and dance, audience participation and interaction, and ridiculous in-jokes and bawdy humour. I was so excited for Gwen's first live theatre experience, and I have to admit any worries I had were about her not being able to focus on the show, sit still for an hour, and remain non-disruptive for the other audience members. Thinking that a family-oriented show, a matinee no less, would be a good starting point, I bought tickets. It didn't even occur to me ONCE that Gwen might actually, you know, be completely TERRIFIED of the people/animals on stage.
The show opened with a lion coming on stage and ROARING at the top of his lion lungs. Gwen (who was on my lap) shook like a leaf, and turned quickly around to bury her head in my shoulder, shouting "NO THANK YOU!" For a few minutes, I honestly thought we would have to leave, and that I'd just dropped $45 on a failed experiment. But the lion went to sleep, the rest of the cast and crew came onstage to sing "The Lion Sleeps Tonight", and I was eventually able to coax Gwen to turn around and pay attention to the show. She loved the singing and dancing, but there were definitely a few scenes she was not keen on - for example, the witch doctor was pretty scary for her. But when those scenes came on, she just turned around and said to me, "I want to look over here now," and waited until happier things transpired on stage. I still can't decide if I did the right thing in forcing her to sit through it - I know if she'd gotten truly hysterical, we would have given up. But for the most part I was really proud of how she handled her anxiety, and I did feel that she was handling it. There were also lots of scenes where she was totally engaged and loving the show, so I'm glad we didn't leave.
The best thing was that after the show, all the characters came into the lobby, in costume, so that we could meet and mingle with them. So Gwen got to meet a giraffe, a jungle prince, two orangutans, a tree, and ... yes ... we went over and met the witch doctor. Smart old witch doctor knew just why we were there and she was friendly and totally non-scary with Gwen, even getting her to give her a high-five. So whew, no nightmares! Later that night, Gwen started singing "weem-oh-way, weem-oh-way ..." and then said, "Mama, remember when we went to the show, and the monkeys were there, and everyone was singing?" "Yes I do, it was a great show! And what did the lion say?" "He said, ROOOOAAAARRRR!" Fears successfully processed, and no sleep problems have resulted thus far (knock on wood). I'm so proud of my little girl!
So yes, an amazing weekend. In amongst all of the activity we also managed to listen to Christmas carols, watch at least part of a couple different Christmas movies, and even work on a Christmas craft. It was as much Christmas fun as we could possibly stuff into two days and I think we did well. And now, at last, I feel like I'm in the Christmas spirit!
Posted by adequatemom at 7:13 AM

The inventor of round sprinkles clearly had this, and this alone, in mind:
http://www.youtube.com/watch?v=gkr0VYcZ-eY

I'm quite certain this one video justifies every mess they have ever caused.