You Can Take the Geeks Out of the SCA, But You Can't Make Them Dress Normal ... or Something

Chris and I (and Gwen, by default) used to be in the SCA. For those who don't know, SCA stands for "Society for Creative Anachronism" and involves getting dressed up in medieval clothing and going to events where we take part in various activities that took place during the middle ages - everything from armoured combat to weaving and spinning, medieval dancing, rapier fighting, embroidery and blackwork, archery, performing music appropriate to the period, calligraphy and illumination, and about a billion other things. See, here's a picture: 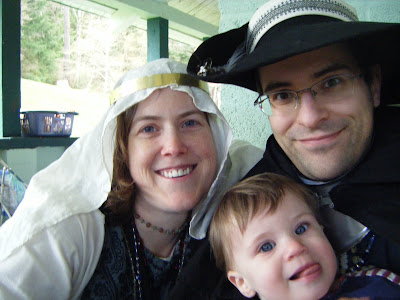 We quit the SCA in 2009, but we have had a very hard time quitting our habit of getting dressed up in bizarre costumes. In the past six months we have attended a pirate party, a 1940s-themed party, and a live performance of the Rocky Horror Picture Show, all in costume. In addition, I went to a Lady Gaga concert and Thrilled the World, both of which also required certain levels of costuming. In a few weeks, we're going to a Murder Mystery party, so it's off to Value Village we go again.

We just can't stop ourselves. I think next year we'll probably take up competitive ballroom dancing, just for the excuse to dress up in those incredible clothes. It's the next logical step, right?
Posted by adequatemom at 7:30 AM