I had a bunch of holiday time to use up by the end of the year so I took four days around Remembrance Day, amounting to a week off with the stat holiday. I have two more days before I go back to work. The truly brilliant part of this scheme is that I have still been sending Gwen to daycare, so I have been putting in 6-8 hour days on schoolwork. It is pure bliss. I just finished Popular Culture and the Media (final grade A-) and have now started Psychology and the Mass Media. If anyone wants to read a research paper analysing the lyrics of Beyonce's "Single Ladies" or discuss cognitive dissonance, I'm your gal.


As if that weren't awesome enough, this past weekend we left Gwen with her grandparents all weekend as their anniversary present to us. Normally I would have insisted we go to a bed and breakfast (as we did last year and loved it) but this year Chris made a good case for staying home, puttering around in our jammies, and watching movies. After all, we have done a LOT of travelling this year, so a mellow weekend sounded just right. And it was. We slept in, we turned the TV as loud as we wanted, we swore out loud, we ate junk food at random times of day. We didn't change any dirty diapers or refill any sippy cups or listen to a single bit of whining. It. Was. Awesome.


On Friday night we went out the theatre to see RED, which I highly recommend as hilarious. Then over the weekend we watched Wanted, Nine, and The Good Shepherd. They were all .... okay. Nine (not to be confused with 9) was probably the best: I loved the music and really enjoyed the various performances. Wanted was the weakest, and when I say weak I mean REALLY FREAKING WEAK.


We went to pick up Gwen last night and she fell asleep on our long drive home from the grandparents' house. Then, of course, woke up as I tucked her into bed. She wanted a story and prayers and sleepy songs and the whole routine. I didn't want to turn on the light, so I made up a story instead. "Once upon a time there was a little girl named Gwen. She was very beautiful, and very smart, and very kind..." and Gwen piped up, "and very tired." I have never, ever known this child to admit that she was tired! I gave the story a quick ending ("So she said goodnight to her mama and dada and grandma and grandpa and went to sleep and had wonderful dreams of lions and monkeys, the end.") and kissed her goodnight, but no, she still wanted prayers. And sleepy songs. So I complied. And then she really did go to sleep, for a good 12 hours.

I am cautiously optimistic that whatever that horrible sleep problem was, we're through the worst of it (until next time). Every morning I tell her how proud I am of her for sleeping all night in her bed. Man ... that was really not a fun couple of months. But knock on wood, we're onto a new phase now.

Speaking of phases and changes and growing and awkward segues, guess who has grown an entire 10 cm in the past 10 months? Getting clothes to fit this child is a bit of a challenge. Most of her pants hit her mid-calf, but if you get a pair that actually goes to her ankles, it falls right off her non-existent butt. Shirts, the same. If you see a good two inches of arm sticking out of Gwen's sleeve, it's not because I'm too cheap or too negligent to buy her a new shirt. It's because SHE IS REALLY LONG AND SKINNY and manufacturers of toddler clothing do not know how to deal with it.

This post was meant to be a random "Hello, here are two paragraphs to prove I'm still alive," and now it's a rambling testament to my wandering attention span. Time to hit the Post Button! Whee! 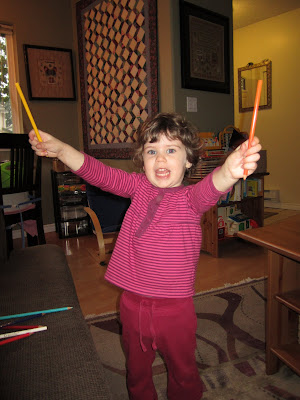 Posted by adequatemom at 6:26 PM