1. Want to know my absolute favourite tip for a successful reintegration with real life after a wonderful holiday? It's actually a two-fold tip. First, make sure that your first day back at work is not a Monday, because then you will start that first day of reality staring down a five-day week that seems to actually stretch into eternity. Make your vacation run Tuesday to Tuesday or even Wednesday to Wednesday if you can. Coming back to a short work week will do you a world of good. The second part of the tip is that you should plan to arrive back home a full day before work starts. In this case, we arrived back home around 4pm on Monday, and I didn't go back to work until Wednesday. But on Tuesday, I took Gwen to daycare. I spent the day doing (no joke) FOUR loads of laundry. Also buying groceries as there was nothing to eat in our house. Having that day to get back on top of things was incredibly valuable. And then my three-day work week was the icing on the cake.

2. I brought my schoolwork on holiday with me and by the end of the third day I was about a week ahead of schedule for the assigned readings. Which really proves to me how invaluable a schoolwork day (ie off work, house to myself) could be. I am finished my first essay and waiting for my hired proofreader to return from holidays so I can send it to her, then on for grading. I'm already pondering the topic for my next essay, then I have four more units of reading, one more essay, and an exam to write. I might be finished this course in early October which would be PHENOMENAL and perhaps I'll start my next course the same month. I can't tell you how incredibly motivating it has been to finally set myself a finish date.

3. In addition to schoolwork, I read four books while we were away. FOUR. One, two, three, four. I actually had to ask my dad to bring another book up to the cabin when he arrived, because I had run out of stuff to read. Here's what I read:


This was loaned to me by a work colleague and though I didn't expect to like it (it's primarily a mystery, secondarily a historical novel, neither of which I usually enjoy) I ate it up. Incredibly intriguing and lusciously written, this page-turner is a perfect summer read.


I go on requesting sprees with my local library and never know which books are going to show up. Having heard good things about Sedaris, I requested a whole bunch of his books and apparently they were not in demand because three of them came in right away, prompting me to comment, "Man, I hope I like this guy, because otherwise I'm stuck at the cabin with three books I'll hate." I did not hate them. I am not really a laugh-out-loud reader, but I was chortling like mad while reading these. Humour is not the only element, though; Sedaris' essays are also quite thought-provoking and, at times, emotionally stirring.

Then my dad loaned me this one, King's newest book of short stories. I get such a kick out of the fact that my dad is now a King fan - when I was a teen and reading every dog-eared King novel the library had to offer, he used to mock me mercilessly. I guess at some point in the intervening years he actually *read* a Stephen King book - it was probably Shawshank Redemption

- and it was like a gateway drug. Now he's got these gorgeous, reissued trade paperbacks of Carrie

and all that schlock. Anyway, Just After Sunset has some great stories in it - as well as a few that I wasn't crazy about, but hey, they can't all be winners.


4. My child continues to be both completely entertaining and an utter genius. It was great to show her off to her grandparents and auntie, who kept laughing at her mannerisms and gasping in awe at her language. Then they would turn to me and I'd say, "I KNOW, this is what I try to tell you, but you just have to see it in person." For example: Gwen pulled the one lonely magnet off the cabin's fridge and said to her Grandpa, "This is a K, Grandpa. It says 'kuh'." Yup. Two years old. She is well on her way to becoming just as much of a bookworm as her Mama is, if you ask me.


5. While on vacation, we discovered that Gwen can drink from a (non-sippy) cup. What else has she been hiding from us? 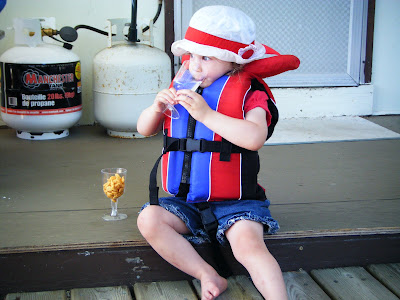 Posted by adequatemom at 7:15 AM

Just to clarify, she can drink from tiny plastic wine glasses. Regular cups have yet to be mastered.