One of my favourite blogs, Rants from Mommyland, recently had a three-part feature on the things people swore they'd NEVER do once they became parents. We've all got a few of these, I'm sure. And yup, a few of those contributions were from yours truly:

"I'll never let my kid get hooked on TV." Not having cable was no help in this situation. She is hooked on Blue's Clues DVDs. It's the first thing she asks for nearly every day. Oh well, could be worse ... We have NO Dora or Elmo DVDs!

"I'll never be one of those moms who arrives late to everything. How hard IS it to arrive somewhere on time?" Turns out it's not as easy as just adding another 30 minutes to your prep time, because even when you've planned everything perfectly and you're heading out the door right on time, the baby throws up and then she needs to be changed and fed and burped and whoops, YOU need to change too, and now she's falling asleep and should we wake her or just cancel the whole outing? Sigh. Maybe tomorrow ...

There were some really interesting and thought-provoking contributions to these posts, and it got me thinking of the great divide between the pre-parent expectation versus the reality of parenthood. For the most part, I think I knew enough not to make grand sweeping declarations about what kind of parent I would (or wouldn't) be, because the minute the sperm meets the egg All Bets Are Off. You've got to walk a thin line between being the parent your kid needs and being the parent you yourself can live with, and sometimes the result ends up being quite a far cry from the parent you swore you'd be.
The biggest gap between my expectations and reality, which makes itself clear to me on almost a daily basis, is that I know all the things I should be doing, all the rules I should follow, and yet I don't. Check out any article on parenting, and chances are I am continually breaking about half the rules. And not because I think the rules are dumb; quite the contrary, I know they are solid, common-sense ways to teach a child cause-and-effect and I have every intention of putting them into practice. But I am surprised to find that I am a ridiculous softie when it comes to my kid. When I'm not in the same room with Gwen, it's all so clear; I know she's smart, I know she's manipulative, I know she's playing me. But when I'm with her, I'm a total pushover.
Don't give in to whining. Ever watched a parent state a rule and then give into their begging, pleading kids? I have, with great scorn, thinking to myself, "Congratulations! You just taught them that whining works, good luck with the next 15 years." But damned if I don't do it myself. Whining is Gwen's version of passionate, articulate arguing, and often I don't know pre-whinefest how important the issue is to her. Once I know how strongly she feels about it, I might change my mind. I do, however, have an out: if I decide I'm going to give in to her, I make her state her request in a big-girl voice with manners and no whining. That way, I can lie to myself that she believes politeness, not wheedling, is the way to get what she wants. Nice rationalizing, huh?

Don't ask - tell. If you are trying to prompt a child to do something non-negotiable - for example, brushing her teeth or putting her shoes on - then it's not supposed to be phrased like a question. Instead of saying, "Shall we brush your teeth?" or "Ready to put your shoes on?" or even "Can you please get your shoes?" we are meant to say, "Let's go brush your teeth!" or "Time to get your shoes on!" It makes perfect sense. Still, I catch myself breaking this rule all the time, which is made even worse by the fact that Gwen will respond to "Shall we put your shoes on?" with a cheerful "NOPE!" and then what am I supposed to do? (OH YEAH: follow the stupid rule and then this won't happen!)

Don't reward misbehaviour with attention. I can resolve over and over again to keep this rule, but you know what? When she hits me on the head with her sippy cup, darn tootin' I'm going to respond.

Don't repeat instructions. I've blogged about this one before. Gwen is a very active child, extremely distractible (by her own whim, not anyone else's direction), and talks NONSTOP. So when it's time for me to direct her to do something, there's a lot of inner and outer chatter I have to cut through in order to get her to notice that I am speaking to her. I can't tell you how many times I've read that the solution to this is to pledge to yourself that you will only give a direction ONCE: then you will automatically do everything in your power to make that one time count. Makes perfect sense, right up until the time that I kneel down, touch Gwen's shoulder and direct her eyes to mine so I *know* she's paying attention, give a clear and simple direction, and get totally ignored. Then what?

Sure, I skipped the loud fist-thumping generalizations pre-Gwen me may have made, but not a day goes by that I don't think to myself, "Hmm, never thought I'd be that parent." Still. As long as I get to be that parent to this kid, I think it'll all work out. As far as I know, there haven't been any studies done to show that giving a kid an ice cream cone before dinner once in a while means he or she will turn out to be an axe-murderer. 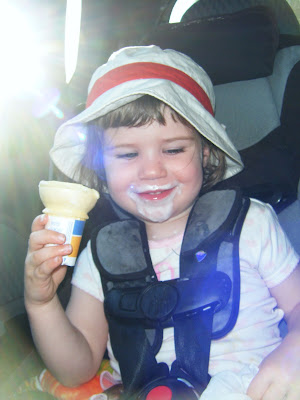 And if there are, please don't tell me.

Posted by adequatemom at 7:32 AM

"Don't reward misbehaviour with attention". That is the one that I am struggling with the most over here. How do you get slapped in the face and pay no attention? Pffft.