Now she really has bedhead

Encouraging Gwen to take her nap has been growing increasingly difficult over the past couple of weeks. We now regularly employ two strategies. The first is to re-enter Gwen's room 10-20 minutes after laying her in her crib, reminding her that it is sleepy time and that she should lie down, close her eyes, and go to sleep. This is a tip we got from Gwen's caregiver, Denise, and it often works (though everyone agrees that Gwen is a much-better-behaved child while at Denise's house). The second strategy is to check her diaper at that time, because it seems that 10 minutes into naptime is the ideal time for Gwen's bowels to kick into action. At first I thought that being in a dark room without any stimulation meant her body relaxed enough to let go the poop, but in my more suspicious moments I wonder if she does it on purpose to get an extra few minutes of wake-time attention. In any case, a diaper change is often needed in order to proceed to naptime.


So, on February 6th, nearly two weeks ago, Chris put Gwen down for her nap, then came back 20 minutes later to remind her to go to sleep. She ... greeted him at the door. Because she had climbed out of her crib. BECAUSE SHE IS A NINJA. 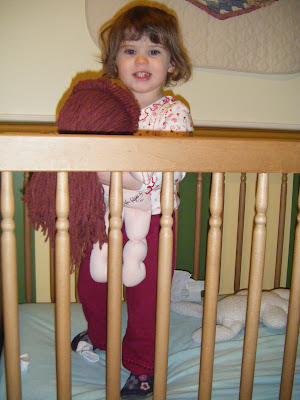 Well, not exactly a ninja. See, we had this piece of foam wrapped in a pillowcase and tied to the headboard of the crib, because Gwen, like her mom, is a very restless sleeper and tends to crash her noggin into the wood about 91872193456 times a night (approx.). So we very thoughtfully put a pillow there in the hopes that her incredible brain would not become overly damaged. However, her incredible brain eventually lit up with the thought that she could use this pillow as a step up to climb out of the crib.


I remind you that after this daring escape she was not crying or whimpering about being hurt. She had gotten out of the crib safely. When I ascertained that this was the case, I felt the matter was settled. Okay! My kid can get safely out of her crib with the help of a foam pillow, which has now been removed. Let's try to hide the fact that we are secretly proud of her for this, and move on!


But no. Chris disagreed. He lobbied for the next several days about converting Gwen's crib into a bed. I wept and wailed and gnashed my teeth (well, metaphorically - these veneers were pricey) over Gwen's lost babyhood. I felt Not Ready. I protested that we would have to do sleep training all over again, because essentially we were teaching her a new method of going to sleep. I told him that if we tried the bed and it didn't work, we couldn't very well go back to a crib. I complained that it would be utter hell. All my arguments were for naught - I knew what had to be done. Sure, she'd gotten out safely this time - next time we might not be so lucky.


Fast forward a week. A week in which, pretty much every time I went to get Gwen after naptime or in the morning, she was actively trying to get out of the crib. Towards the end of the week, she had figured out how to get her entire lower leg over the bar (ie, the bar of the crib sat perfectly in her 'knee-pit'). She had her arm on the footboard and was trying to figure out how to hoist herself upwards enough to get her other leg over. I was morbidly fascinated in watching this process. She didn't succeed in getting out (safely or not), but it was clear she was not going to give up. 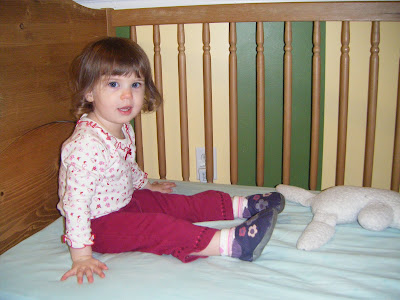 So, last Sunday, after one of those afternoons where no amount of naptime reminding and diaper changing had any effect, I picked her up out of her crib and said, "Gwen, sometime soon you're going to get to sleep in a big girl bed. Would you like that?" "Happy!" she replied. "Oh, that would make you happy?" I asked. "Treat," she confirmed. Okay. LET'S DO IT.
Chris originally thought he was going to have to do some crazy carpentry with sawing off the bars and re-modelling the whole device, but instead we went to Zeller's and bought a bed rail. And also some new sheets, which ostensibly Gwen picked out, because I've heard that can help kids make the transition. Anyway, it didn't take Chris very long to take off the bars and put on the rail, and meanwhile I made dinner and Gwen dumped out a basket of laundry, so everyone contributed. And then, after dinner, we settled in for A Very Special Bedtime. 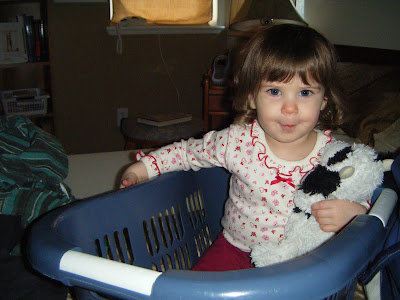 Gwen did indeed love her new bed. As you can see from the photo below, the bed rail makes it so there is only one spot in which she can get up to or down from the bed. Her first instinct was to jump on the bed, but we reminded her of what the doctor said ("No more monkeys jumping on the bed") and that she might, in fact, bump her head. She was still doing a lot of standing and walking, though, which isn't hard to understand since she has spent the past year or so doing those same activities in her crib. 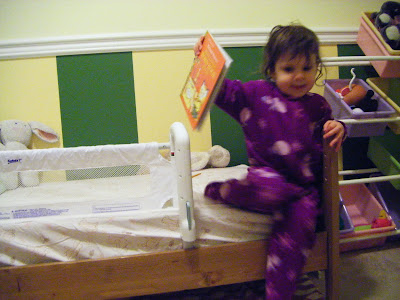 We tucked her in and gave her lots of kisses and told her to have a really good sleep in her big girl bed and reminded her how proud we were. Then we turned off the light and walked out. Downstairs, I turned on the video monitor in time to see her shuck off the blankets (typical), stand up and march across the mattress (also typical), and walk straight off the unrailed edge of the bed, doing an impressive faceplant onto the floor (ooh, that's new! Four stars.).
Chris went in to comfort her and tuck her back in to bed. She DID NOT MOVE for the rest of the night. I actually went in an hour or so later to make sure she was still breathing.
The next morning, she was fine. She happily crawled out of bed before we awoke and brought a favourite toy back into bed with her. When I went to get her dressed, she invited me to snuggle with her in her bed. I was, once again, full of good cheer. I figured she'd scared herself just badly enough to NEVER again get out of bed in the dark, at least not while walking upright.
We've had a whole week's worth of (knockonwood) incident-free nights since then and I'm feeling pretty proud of our girl for her ease in making this transition. Sure, on Monday afternoon at daycare she burst into tears while watching a Humpty Dumpty cartoon, but what's a little post-traumatic stress syndrome among loving family members, hmmm? She was trepid about going to bed on Monday evening, but less so the next night, and not at all the third night, so I'm pretty sure she's going to be fine. And she is pretty proud of herself and her big girl bed. 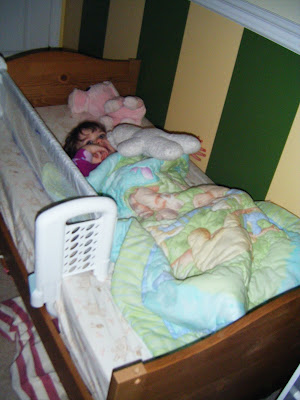 The hitch, of course, came at naptime. What toddler in his or her right mind would choose to lie down and sleep when s/he could be playing with a myriad of intriguing toys? Well, apparently not our Gwen, and this was no surprise. She spent last Tuesday at home with Gramma, and had no nap at all. On Friday, she was home with me, and I was determined to make it work. I spent two hours - TWO HOURS - going into her room every single time she got out of bed, to remind her that it was naptime, and that she should lie down and go to sleep. After two hours, TWO HOURS, I was completely out of patience and totally out of ideas. So she didn't nap that day either.
Chris to the rescue, though, as he did something involving her window, a black flannel sheet, her blackout blinds, and painter's tape, and it is now pitch-black in Gwen's room with the light off, even in midday. Yesterday and today, she had terrific (and easy, non-patience-trying) naptimes.
Another milestone reached. Thank goodness she hasn't figured out doorknobs yet, or we'd *never* have a moment's peace.
Posted by adequatemom at 9:20 PM

I totally hear you on the doorknob thing! It's our saving grace right now!

Nice! We had to put one of those doorknob thingys on Callum's door the first night in his toddler bed. The transition from crib to bed with Callum was hell, I'm very jealous right now! Also not looking forward to Claire's eventual (and soon, I suppose) switch to a bed. meh. I hope it goes half this well!

Also? GWEN - STOPPING DUMPING OUT THE LAUNDRY! IT DRIVES ME CRAZY!
~ahem~