One of my New Year's Resolutions was to spend more time doing the things I want to do. I am rocking at this and it is improving my life immensely. A big part of this, of course, is spending less time doing things I don't want to do. One thing I don't want to do is use the computer as a time-killer. I love spending time online, of course: catching up on my blogroll, checking Facebook, goofing around with various other stuff. BUT there is a big difference between intentional computer time and the scenario I find myself in all too often, which is that I fall back on websurfing and email-refreshing for a couple of hours instead of finding something that would actually satisfy my need for mental stimulation. Walk away from the computer and go put on a movie, for Pete's sake.

Another thing I need to back off from is my volunteer work at the church. This is a challenge because the other members of Church Council have learned a dangerous fact about me: I am competent. As such, I am the one who gets called on to do all kinds of stuff. Just last week a fellow Council member, a very pushy one at that, called and asked me to take on a large task. Now, I agree that this task needs to be done. And I know I would be good at it. But as she described it, I also knew that I would find it entirely unpleasant, and that the methods she was suggesting for completing it would make me completely miserable. I was also struggling to think when I could possibly fit it in. And then it occurred to me! An idea so brilliant that I was almost blinded by its stunning radiance as it burst into my mind. I said, "No."
Have you ever done this? I swear, I was almost high afterwards. Chris was sitting right next to me and I bragged to him about it afterwards. "Did you hear me? I SAID NO! She asked me to do something that totally isn't my job, and I said no. IT CAN BE DONE!" I was just itching for someone else to ask for something so I could turn them down.
So, what have I been doing that I enjoy? A few things. I signed up for a Belly Dancing class. We've only had one session so far and it was pretty disappointing, primarily because the music was too loud and the teacher far too quiet for any of the students to hear a damn thing. I'm trying to keep an open mind for the second session tonight, though. I have also been spending some serious quality time (ha) in front of my TV, making my way through the boxed set of Kids in the Hall that I purchased with Christmas money in the Boxing Week sales. I'm really enjoying the show and the special features that give so much insight as to how the show was created - it's an icon of my youth, really.
Probably my biggest time expenditure at the moment, however, has been my foray into cardmaking. You may recall that last year I made Valentine's Day cards, ostensibly from Gwen, for her family members, and I decided to carry that tradition on this year. When I did it last year, I had no idea what I was doing, and no real plan, but I had hoped to improve for this year. A couple of weeks ago, I happened to hear on the radio (yay! Listening to the local station finally pays off!) that a rubber-stamping store was having a grand opening which included a make-and-take card workshop. I thought this would be a great opportunity to learn ... well, anything, since I had pretty much no knowledge to begin with.
I went to the workshop and did something that is very, very unusual for me. I asked questions, lots of them. I drew all kinds of attention to the fact that I am a total newbie and know NOTHING about cardmaking: techniques, materials, tools, lingo, and so on. I’m a blank slate! Usually I am so uncomfortable with the image of myself as ignorant that I fake it, not letting anyone know how clueless I am. I am most comfortable with skills I can pick up very quickly, i.e. in less time than it takes for my “fake it till you make it” routine to get discovered. But I really want to get good at cardmaking, so I decided to throw my ego to the wind and actually try to learn something.

The cardmaking workshop was very informative, even though every participant made the exact same card and thus there wasn’t really much creative process involved. Still, I learned things. And then I got the lady who was teaching the workshop to follow me around the store while I asked like a hundred more questions about everything that I saw on the shelves, how it would be used, and so on. IT WAS AWESOME. I came home all happy and full of knowledge. And no one made fun of me for not knowing everything to begin with. Weird. 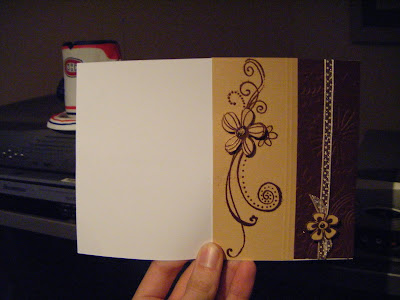 I’ve said before that I’m pretty crafty but not really creative. I base that on the fact that I don’t actually create one-of-a-kind pieces, but instead follow patterns and end up with the same things that anyone else would if they followed those patterns. With cardmaking, I am forced out of that rut and have to come up with ideas. I have this great magazine full of beautiful cards, and I look through it and find an inspiration and then use that as a starting point for my own cards. I had a great time on Sunday just playing around, making several thank-you cards. There was no need to make them perfect – the point was to try different things and learn how they worked. It was very freeing. I also love that making a card takes an hour or so, while making an embroidery gift takes weeks or months.
This New Year's Resolution is panning out for me bigtime. I am feeling far less rushed and I am really enjoying most of my non-work hours. Chris and I even get to watch movies together sometimes - we don't have an easy time choosing movies that we both like, but that's another problem altogether. I'm really glad that my "free" time is being used more to feed my soul these days.
Posted by adequatemom at 11:06 PM

Email ThisBlogThis!Share to TwitterShare to FacebookShare to Pinterest
Labels: crafts, life beyond Gwen

I also struggle with computer use as a time-filler. Someday I might be brave enough to try to tackle it.

Your cards r sure pretty.

Good for you!!!
I too struggle to say no, and when I do it can be either a sudden remorse and fear I did the wrong thing, or sometimes as you describe a high like no other :D

Right now I am doing something I absolutely should not be doing: sorting beads. Because it makes me happy, and isn't very time sensitive. I think I'll post some pictures.

Yay! Congrats on saying "No" and congrats on learning something about a new hobby. How fun :)

The card is beautiful!

I, too, enjoy saying no ;). Sometimes I say no just because I don't know want to do it. If its going to make me miserable, and I'm not being paid, why?