I posted this video to Facebook a week or so ago, with the comment that "I don't think she's old enough to actually pretend or imagine that there is food in the bowl." I was pretty sure that Gwen's cognitive development had a ways to go before imaginary play, which is really based on abstract thinking, could begin. Apparently, though, I wasn't giving her enough credit. According to this article, "as soon as children begin to use language — that is, they both understand words and start to use them — they also have the ability to pretend."
The article recommends encouraging Gwen's imagination by letting her play along with grown-up tasks. We've tried this a couple of times lately with hugely positive response. For example, one of the times Gwen is practically guaranteed to get fussy and demanding is when one of us is preparing dinner. It doesn't matter how much she's had to eat; it doesn't matter if there's someone else in the room with her, utterly devoted to her entertainment. If you're in the kitchen preparing food, she is up your butt.
So after reading this article, the next time I was cooking and Gwen was whining, I grabbed another wooden spoon and knelt down beside her with the bowl of dinner-to-be I was stirring. She helped me stir it and was THRILLED. 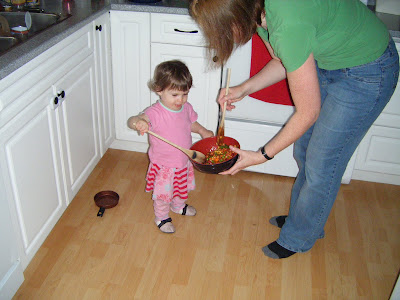 We tried to pull a chair up to the counter so she could stand and "work" alongside me, but we're not totally convinced that she won't just walk off the chair and smack her head on the floor, so that's not a perfect solution. We'll have to keep working on it. I've always looked forward to the joys of cooking and baking with my kid - I didn't think they'd come so soon.
PS: Gwen's sixth tooth popped on Tuesday!
Posted by adequatemom at 7:42 AM

I'm not sure why but I find this really awesome and captivating. Maybe I secretly to be able to teach her to make bread - pretend or real.

I was thinking about the chair thing and Miss Gwen (I don't know why, too much time on my hands?) and thinking about your kitchen - what if you jammed the chair into that corner there against the cupboard and then stand beside her? I don't know if there would be enough space in that corner beside the sink for YOU to actually cook though?... and probably every bowl/spoon etc you need is in those cupboards...

OR, if you can handle it, maybe give her a smidge of what you are stirring in her own bowl and spoon on the floor and let her go to town? It'll surely end in an enormous mess, but she won't be up your butt!

Maybe you need to build her a microwave stand kitchen ;)? You know. In your spare time...

(did you read the comments on the article? So flippin' funny. Made my morning.)

BAHAHAHA - this was my favourite comment from the article - "my 15 mo daughter can recite the constitution, declaration of independence and the last 7 presidential acceptance speeches (in english, greek and latin) but for some reason is unable to tie her shoes and brush her own hair. can someone tell me what i am doing wrong? "

Oh comments, how you kill me!

How fun that Gwen is learning to pretend and wanting to be involved!!! I'd second Amber's suggestion of shoving the chair in the corner and standing right beside her. Alternatively if you're completely loaded, you could buy this: http://www.kiddinaround.com/Merchant2/merchant.mvc?Screen=PROD&Product_Code=G97270&Category_Code=LT&Product_Count=1

If I was completely loaded (and had an enormous house), I would so buy that tower thing. The kids would think that is the coolest thing ever!