Sally is an amazing woman that I know in a few different capacities. She attended Gwen's birth as a friend and as a birth doula. She knitted Gwen's first article of clothing, the "Sally hat," as I always called it. She stayed here for a week after Gwen's birth to help me figure out how to care for this tiny person, and support me through all the ups and downs of post-partum. She was there when the Norovirus plague hit the house, and it hit her too.
During the week that she stayed here, dividing her time between working on schoolwork and cuddling a newborn, she talked a lot about getting a puppy. She even went so far as to start surfing Craigslist and other online classifieds looking for a furry companion for herself and her partner, Dean.
Shortly after she went home, they adopted Finnegan, an adorable little fuzzface who, being part miniature pinscher, was never going to get very much bigger. He was just under four pounds when they brought him home.
When Sally and I had the opportunity to chat, in person or via email, we often compared notes on mothering a puppy and mothering a newborn. They are actually shockingly similar: both keep you up at night; both significantly alter your social lives; both are terribly dependent on you for their safety, shelter, and food; both prevent Quality Couple Time (if y'know what I mean, and I THINK YOU DO).
Last July, we got our our first opportunity to meet Finnegan when Sally came to visit. We really enjoyed it. Gwen was very interested in the fuzzy baby, though not entirely sure what to make of him. Finnegan didn't care too much about Gwen, either way (she hadn't started eating solid foods yet, so there was no benefit to sticking close by). This past May, though, Sally and Finnegan stopped by again for a brief visit, and this time the two kids - furry and non-furry - got along great. Gwen "barked" at Finnegan until he returned the favour with a shrill yip: Gwen jumped a little, then cocked her head to the side and started trying to imitate the sound. She shared her food, he shared her toys, and Sally and I continued our dialogue about the joys and difficulties of parenthood.
Last night, Finnegan passed away suddenly. Sally wrote, "He had a congenital diaphragmatic hernia, which we didn't know about until around midnight. He was meant to have surgery this morning to repair it, but didn't make it through the night as his intestines were pressing on his chest cavity causing trauma.
"He had been fine earlier in the day, frolicking and playing with our families ... He was only sick for a few hours."
I've never had a dog before, and have never really been in the position of grieving for a pet, but I'm a lot sadder than I would have expected about this. It seems especially unfair that it happened so quickly, and that Finnegan was so young. After some thought, I realized that because Sally adopted Finnegan so soon after Gwen's birth, I strongly associate those two events. In a way, Sally and I became mothers at the same time, and shared those experiences with each other. So today, I am grieving as one mother for another. I know how heartbroken she and Dean must feel, and I feel so sad for them both. 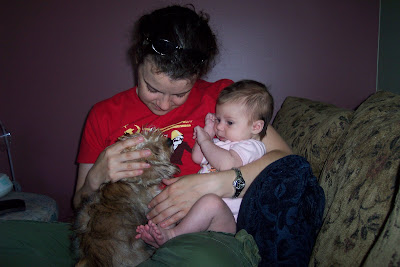 Posted by adequatemom at 6:54 PM

Email ThisBlogThis!Share to TwitterShare to FacebookShare to Pinterest
Labels: life beyond Gwen, photo

Thanks Laura. This was both heart-breaking and heart-warming to read.

As momma to a pug I feel Sally's loss. How awful at such a young age.

Carson (pug) definitely helped train me for Megan - potty training, consistency with treats, simple behavioural technique training....I think you're right, there's a lot of similarities between the two roles of momma to a dog and momma to a baby:)

Although I don't know Sally or Dean, I am thinking about them and Finnegan. I do know the pain of losing a pet and my heart aches for them.

This was beautifully written Laura. Thank you for sharing.

Death is always sad, especially when it comes as a surprise - for both humans and non-humans alike. I'm so sorry for your loss, Sally :(