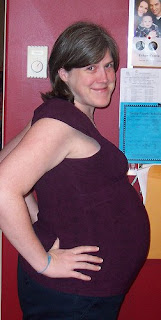 What's happening with baby this week:
- All organs are developed and most are functioning just as they will after birth
- More subcutaneous fat is forming so wrinkles disappear
- Skin becomes a rosy colour
- Lanugo (fine, downy hair) is replaced with vernix caseosa
- Will start to gain as much as 2oz per day for the next 4 weeks
- Will gain more than half of its birth weight between now and delivery (AAAH YOU ARE KIDDING ME NO THIS CHILD CANNOT GET ANY BIGGER!!!)
- Has likely settled into birth position
- Fewer, but *stronger* movements as baby runs out of room
- Is practicing breathing by inhaling amniotic fluid to exercise lungs
- Baby may have hair by now
- Has a normal sleeping/waking pattern; experiences REM sleep
- Pupils of the eye can detect light; can constrict and dilate
- Baby may move into the pelvis and press firmly against cervix (is this what they call "dropping"?)
Baby measures 17-19 inches and weighs nearly 5 pounds. And to that I say a hearty "No Kidding" because you guys, I am FULL OF BABY. At our pre-natal class last week the instructor was teaching us how to breathe during labour, and suggested that we take deep cleansing breaths all the way into our abdomens. Nice idea, but I haven't been able to feel anything but baby in my abdomen for a good 5 months.
As Sue said near the end of her pregnancy, "I know mothering is going to be tiring too, but at least then I can put the baby down. " I really want to put the baby down!
Symptoms to Expect:
- Pelvic and lower back pain (nope, just the ever-present hip pain)
- Frequent urination (yep)
- Belly button may pop soon (yes, it is definitely getting shallower - Chris predicts it will pop by this weekend)
- Excessive tiredness (um, I may have mentioned the tiredness a time or two?)
- Braxton Hicks contractions (maybe? I felt something last Thursday night ...)
- Decreased sex drive (decreased even further? Not sure that's possible...)
- Strange, vivid dreams (a few, yes)
- Swollen feet and ankles (my cankles! Let me show you dem!)
- The top of the uterus is now over 5 inches above the belly button. In fact, the uterus has grown to 500 times its original size throughout the pregnancy! o.O
Additional Symptoms I'm Experiencing:
- Stiffness in my hands and fingers is quite bad.
- So, so, so uncomfortably warm. Wishing spring would come so the rest of the world would be warm too, and stop bitching when I want to turn the heat off.
I'm very happy to see the comment "During week 33, you may notice that you are growing out of your maternity clothes. This is normal - most women end up going through a couple different sets of maternity clothes throughout their pregnancy." Only - would anyone actually go out and buy new maternity clothes at this stage? I'm way too cheap to do that. Which means that in another 2 weeks I'll be limited to track suits and pajamas. Wonder what my co-workers would have to say about that?
For the last couple weeks I have been obsessing pretty steadily on the Hospital Bag(s). I'm still not sure if this urge sprang purely from the nesting instinct or a genuine motherly intuition that things might happen sooner than anticipated. In any case, after pre-washing all the new baby clothes and the cloth diapers (which have to be washed and dried three times for maximum absorbency) I packed the diaper bag, baby's portion of the Hospital Gear. In the process, I opened the single pack of disposable diapers we bought and wigged out on how incredibly tiny they are. The cloth diapers are kind of designed to be used for a couple of years, so they're pretty big (you can always fold them smaller), but the newborn disposables are teensy. It made me realize that even though the baby feels like a strong and gigantic creature within the confines of my belly, she is actually quite tiny and helpless compared to this whole big world she'll be meeting.
Although, I have a hunch she's going to be on the 8- or 9-pound side of the spectrum, not the 5- or 6-pound side.
Posted by adequatemom at 12:35 PM

Its also crazy that the outfit she'll be wearing home which seems ridiculously small now will be TOO BIG when you put her in it (well, most likely)!

I can't find the list I used to pack my hospital bag so I'm trying to guess what it is I'll need. I don't think I even opened the bag last time...