Dear Gwen,
Today you are a hundred and one months old. 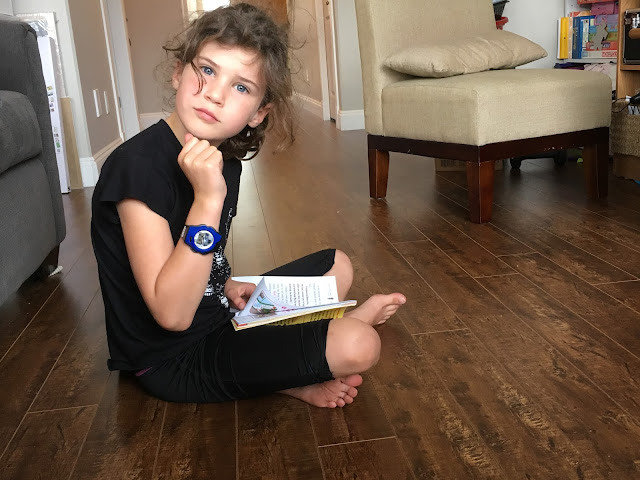 This has been such an awesome month! When last I wrote, we were just finishing up our various summer adventures. This month has seen the return of many routines, which can be anxiety-inducing for both of us, but things have gone really smoothly. Additionally, you seem to have leveled up in your independence, which is really cool!


The end of the summer saw the end of the summer camp you'd been at all season, "Girls Get Active". In fact, this camp ended one week before your vacation did - when I realized this, earlier in the summer, I had to scramble to figure out what you would do for that last week. I ended up putting you on the waitlist for three different camps, but it was obvious to me which one was the top choice: "Bowen Explorers", a camp all about science! "Even figure-skating involves science," the description noted, and I was sure this camp would be a hit. As the end of GGA grew nearer, I broke the news that you'd be going to a different camp for the last week. I hoped this news would go over well, because (a) it's not like all the other girls were still going to GGA, and I was cruelly depriving you of that experience; the camp was over, finito, dunzo. And (b) SCIENCE. However, no, the news did not go well. You were grumpy and cranky and stubborn and anxious and worried and mad. Mostly, you were SURE you would have a terrible time. I spent lots of time and energy trying to convince you that it really would all be fine, to no avail. Fast-forward to the afternoon I picked you up from your first day at Explorers camp, when you were bursting to tell me about the chemistry experiment you'd done, the activities you'd enjoyed, and the fact that your favourite GGA leader was working at Explorers camp this week too. Lesson learned (by me): Don't engage when Gwen is having stubborn fits of resistance-to-change. Just wait till she TRIES the new thing, and then - if she actually hates it as much as she predicts - solve it then. (But she probably won't.) Anyway, you had a great week at Explorers camp, with lots of science and lots of fun. And a bee sting, on the second to last day, so now we know you're not allergic. (Good to know!) 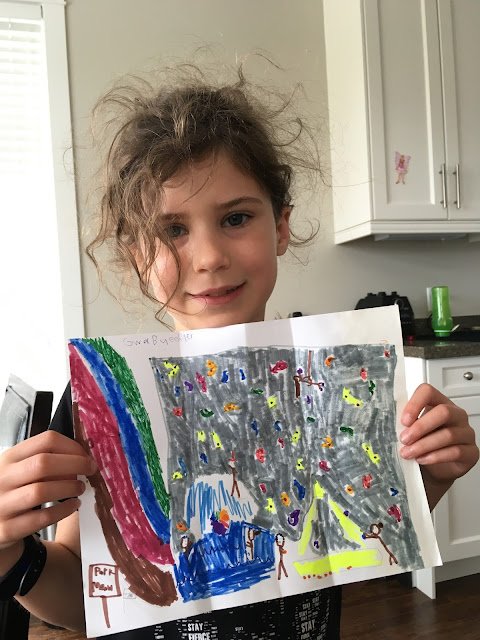 Because last year's back-to-(new)-school was so challenging for you, we did a few extra things this year to help you feel confident and happy. This was the first year that you had a specific idea about what you wanted to wear for the first day(s) of school; both the one-hour assembly on the first day, and the first full day of school, the following day. Your dad took you out shopping to try and find the items you requested, and you guys came home with a pretty cool denim-based outfit. In addition, I took you to get a fancy-pants hairdo at a grown-up hair salon. You got a snazzy star shaved into the side of your head that is short, and some beautiful coloured extensions added to the side of your hair that is long. I was especially happy that the salon suggested extensions, which I would never have thought of, but were a much more agreeable (and affordable) solution than bleaching your hair and then colouring it. 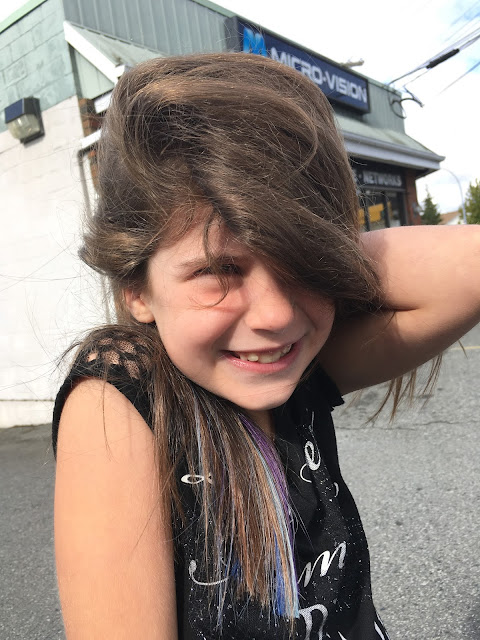 Your first day of school was a night-and-day difference from last year. Like last year, your Gramma Karen took you to the hour-long assembly in the school gym; unlike last year, you were confident, knowledgeable, comfortable, and calm. You happily greeted kids and teachers you remembered from last year. We all had a huge sigh of relief to see that you were so much happier this year. You and Gramma met me at Smitty's after the assembly for lunch so you could tell me all about it, and there were only positive things to say, from both of you. Yay! 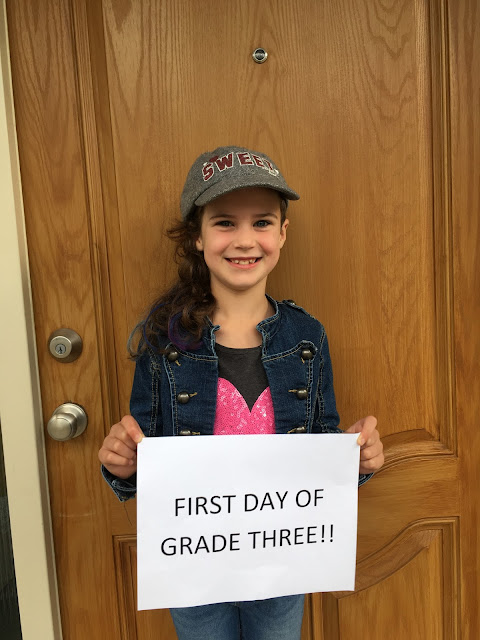 Things only got better from there. At every school, in every district, those first few days are always a chaotic gong show, while the staff and administration work to assess every kid and assign them into their classrooms for the year. Sometimes, the students go to last year's classroom (with last year's classmates) and spend three days there, before being reassembled into different rooms and different combinations. This inevitably leads to upset feelings when everyone needs to transition AGAIN. So this year, your school decided to try something new. For those three days, the student body from Grade 1 through 7 was divided into fourteen cross-grade groups. Each group stayed together and moved throughout the school; so, in those three days, you met every teacher, and spent time in every classroom, all the while forming relationships with students from a variety of grades. I see so many benefits to this method, the foremost one being that it was clear to every student that these three days existed entirely out of the normal school year, and that there was no way the group of students you were spending your days with would be "your class". We spent those three days hoping and praying that you'd be assigned the Grade Three teacher we'd heard described as young, dynamic, adaptable, and energetic, rather than the one we'd heard described as close to retirement, stuck in her ways, resistant to new methods and technologies. I was also really hoping you'd get into a straight Grade Three class rather than a Two/Three split. Last year, as a Grade Two student, you were in a One/Two split, and I don't think that did you much good. The Grade Ones are not readers, and most of the Grade Twos weren't either, and even those who were did not read for pleasure - they read only because it was something they had to do. By the end of the year, you were starting to form an idea of yourself as "weird" because you loved to read, and were the only one in your class who did. Well, good news - by the end of the week, we found out you were indeed in the young dynamic teacher's class, and that it was a straight Grade Three class. Hip hip hooray!! 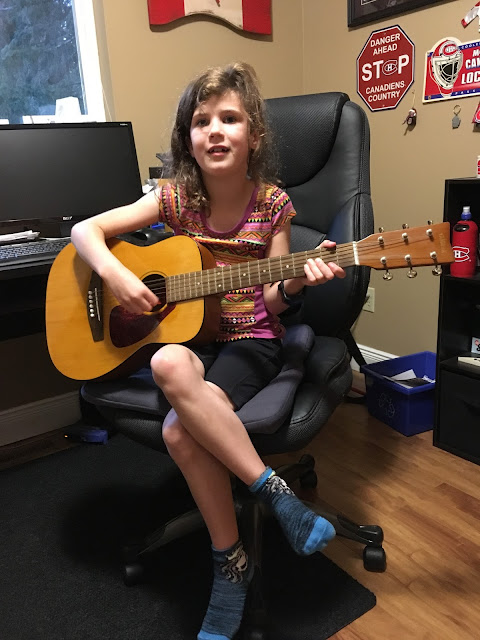 Last week, we got to come to the school with you for "Meet the Teacher" night, an open-house style gathering wherein we got to tour your classroom and have a very brief chat with your teacher, Mrs. Saffin. (The more in-depth parent-teacher interviews will happen next month.) It was a treat to see your desk, your cubby, and the other important places and things in your classroom, and it was wonderful to meet your teacher and put a face to the name. More importantly, though, it brought me so much joy to see you so engaged, excited, and proud to show us around. You really are happy to be there! You had a couple of questions for your teacher at the event, and I was so impressed to see how respectfully she responded to you. If that is her default dynamic with her students, you are going to have an AMAZING year. 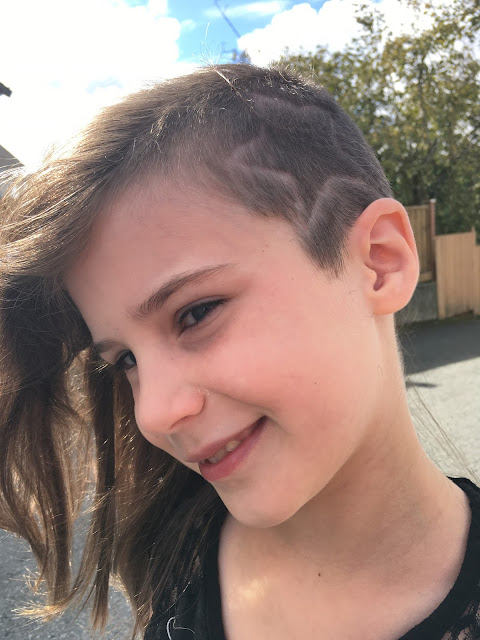 Piano lessons have started up, and you've fallen easily back into the habit of practicing daily. Your rehearsals for Elf: The Musical have also started, though this hasn't gone quite as easily. Your first rehearsal day was very stressful, as once again you were in an enormous room full of strangers, many of whom knew each other from previous productions, and all of whom were very loud and overstimulating. Your director assures me that she makes sure all the kids bond together and that no one is excluded, so we'll hang in there and hope that the next few rehearsals start to get better. Dropping you off there on that first day was hard: your shyness and fear were so intense that they were wearing me out to witness. Beginnings are so hard, but I feel confident that this experience will be a positive one for you. 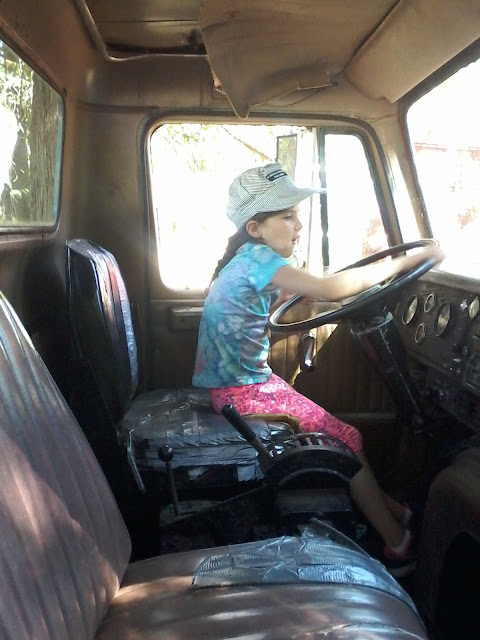 We hit a big milestone last weekend when you were invited to your first sleepover party. A new friend of yours was having a birthday party that started with "starlight skating" at the rec centre and then a sleepover at her house. You told me you were ready for it, and I made sure her mom had my cell phone number just in case. I didn't sleep well that night, as part of me expected to hear from you in the wee hours with a request to come pick you up ... but no. You didn't give us a thought! The friend's mom, who knew it was your first sleepover, made sure to speak with you before bed to encourage you to come find her, no matter what time it was, if you needed to. Nope. You stayed up and partied with your friends (stayed up till midnight, then 'went to bed' and proceeded to giggle and chat until 1:00am), slept hard for six hours, then got up and played with your friends some more and enjoyed a hearty breakfast of bacon. We came to pick you up mid-morning and you didn't even want to leave. We're mean, though, and we made you come home with us. 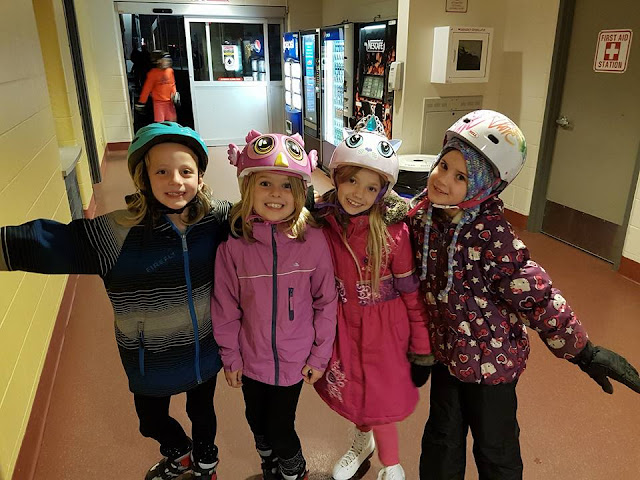 This time of year means many changes to our routines; not just the start of school, but the change in work hours for me, meaning I have to be at work earlier than I do over the summer. We are still working the kinks out of our morning routine. One day, I wasn't quite finished brushing my teeth when you were ready for your breakfast, so I told you to go ahead downstairs and put your waffles into the toaster, and that I would be down in time to butter them for you. By the time I got downstairs, you had toasted your waffles, packed your lunch and water bottle into your backpack, and got out your plate and cutlery for your waffle. Wow!! I'm so happy to see you starting to help out in this way - it really beats watching you lie on the couch and listening to you moan about how awful mornings are while I pack all the lunches and make all the breakfasts. Yay independence! I praised you like crazy, and have started to make "get out waffles and set my place" part of your morning jobs.

Well, I think that's it for this month, Gwen. As always, you are the coolest kid ever, and we are so glad to be your parents.

Posted by adequatemom at 9:02 AM