Today you are seventy-seven months old. 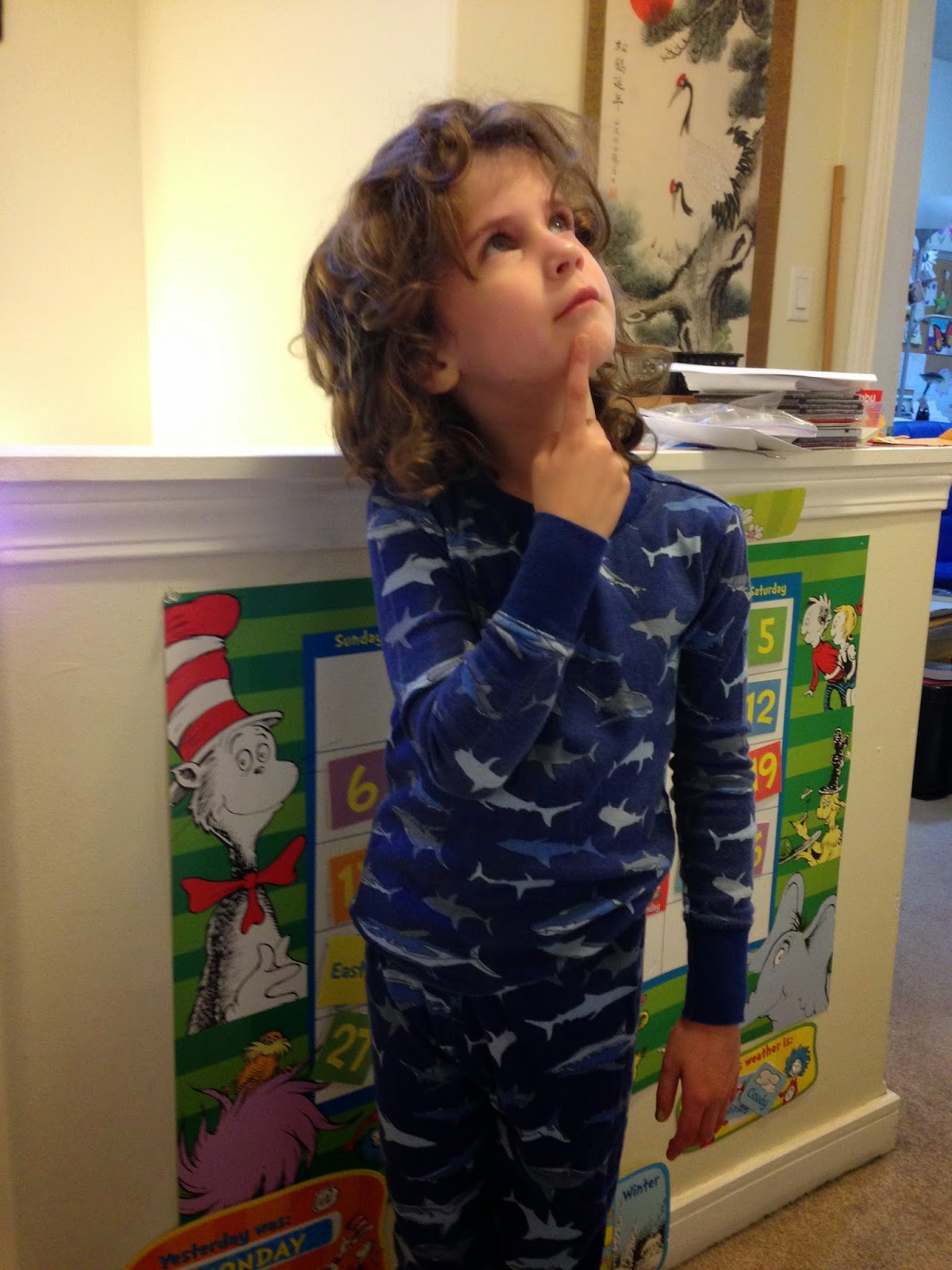 September has seen a return to routine and the creation of new routines. Here is a list of all the logistical changes that have happened in our lives in the past few weeks:

That’s a lot of new stuff going on! You like to be busy, though, and you like routine, so I think that once we get all the kinks worked out of this new normal, you will be pretty happy and hopefully your behaviour will reflect that too. 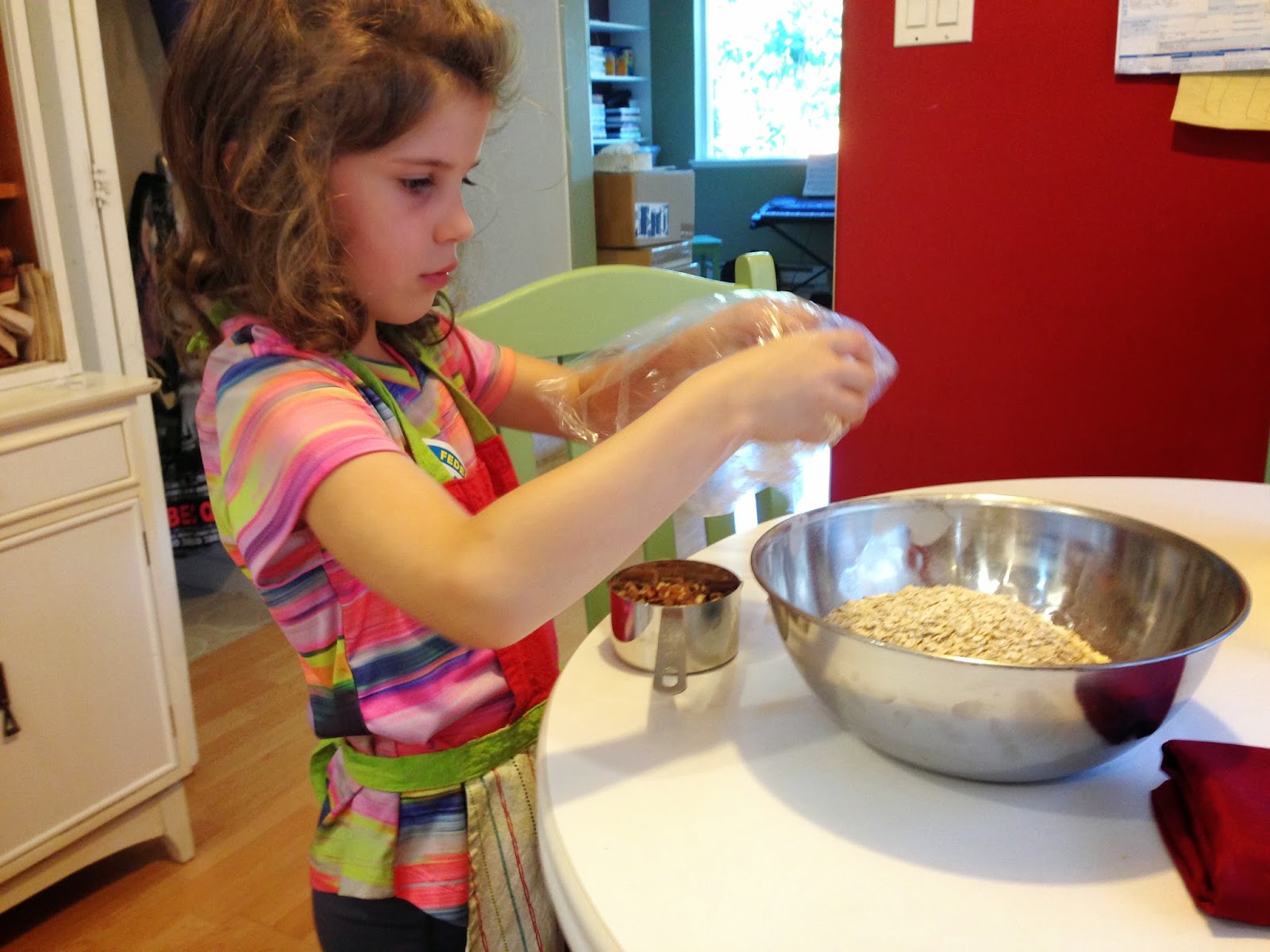 You are loving your gymnastics classes. I wasn’t sure how you were going to do in a 90-minute class but you are having a great time and I haven’t heard any complaints about your distractibility, so I’m guessing that the class keeps you active enough to not get bored and antsy. Hooray! Karate has basically imploded for you over the past couple of months, so I’m glad we have found a physical activity that is filling that need a little better. Enormous thanks go to Grannie who bought your gymnastics classes for you as a gift. 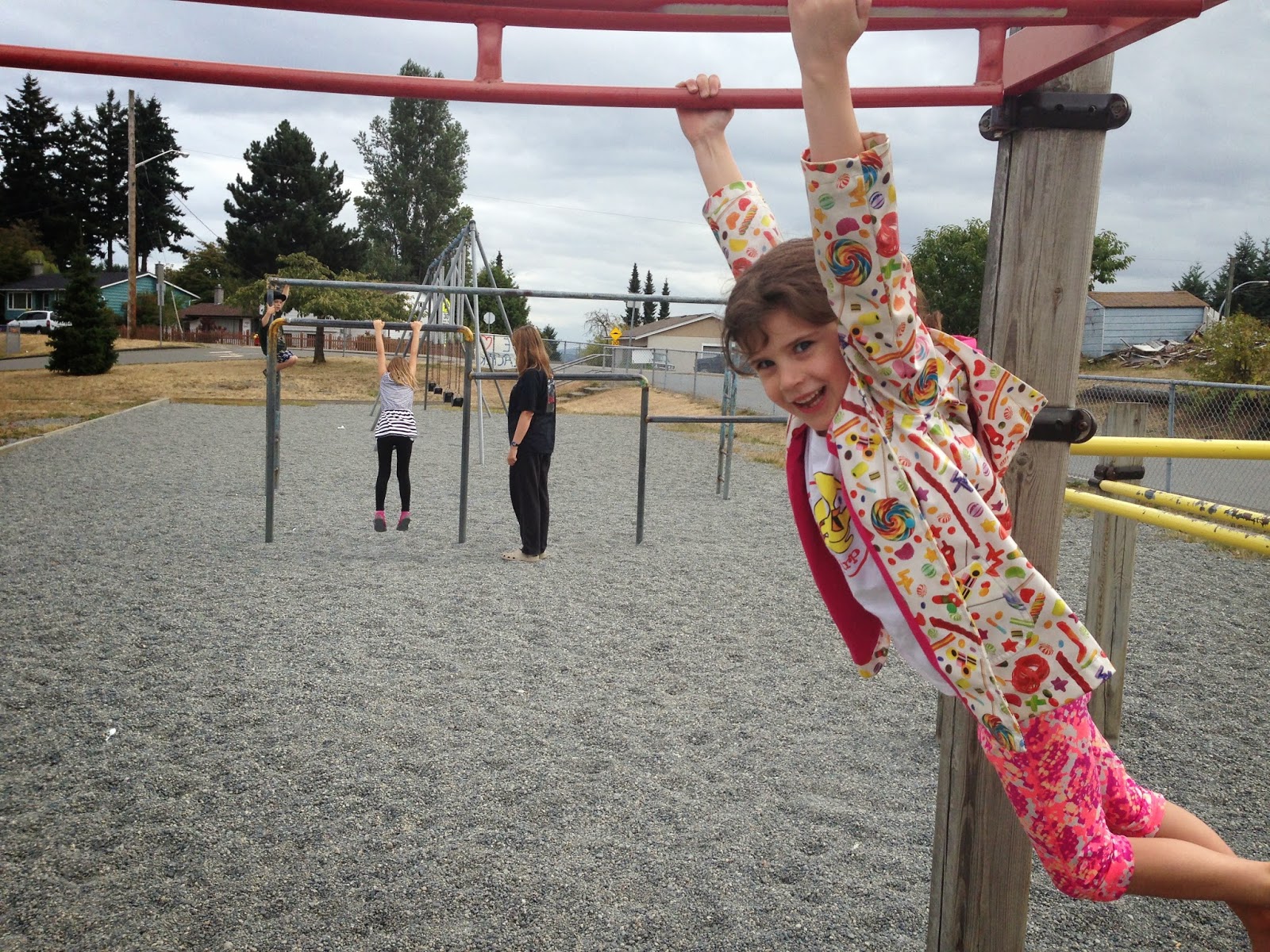 A couple of weeks ago, you were supposed to test for your red stripe at karate. They gave you the notice the week before so you had been looking forward to it for seven days (let alone the last two grading cycles that you didn't qualify for, where you had watched all your classmates progress and leave you behind). In the car on the way to class you confidently told me about the things you would have to do to at the testing today. About 2/3 of the way through class, the teacher came out and asked Dad to step into the office for a minute. When Dad came back, he told me that because your focus was completely absent that day, you would not receive your stripe. Your listening was terrible and we had overheard the teachers trying to redirect you SEVERAL times. The teacher also mentioned to Dad that she has had to do the same thing (not give a stripe, at the last minute) for a few other students and that it has always been a “gamechanger” with the student showing great improvement after that point. Dad and I agreed with the decision that you would not get your stripe, but were under the impression that you would still have to do the grading/performance portion, just for good practice. When parents were invited into the dojo we saw all the kids lined up in order in the middle of the dojo, except for you – you were seated on the floor in the corner, facing the wall. The kids were put through their paces as a group. You started to sob about halfway through. Then the kids were called up one by one to receive their certificates and their stripes. You were the only kid left out. No one spoke to you or acknowledged your crying through the testing. When they were done, one of the teachers invited you to join the line of kids so they could bow out and say "goodbye" which is the usual ending ritual. Then all the kids rushed to their parents to show off their goodies, and you sobbed your way over to us, inconsolable. Conversation on the car ride home revealed that although the teacher had come out and spoken to us about your not testing, no one had spoken to you about it, so you'd had no idea you were being left out until the testing began.

We decided to give karate a few more weeks to see if, indeed, this disciplinary action had been a “gamechanger”. It has not. Your karate “game” has not improved at all. It is my view that you are either not capable of doing any better at karate right now, or you are not sufficiently motivated to do so (and let’s leave aside my feelings on whether ‘public humiliation and disrespect’ is an appropriate way to motivate any child; it didn’t work for YOU, so that’s enough of that). This week will be your last karate class for a while. You may want to revisit it in the future, and that’s fine, but Dad and I agree it’s time for a break. 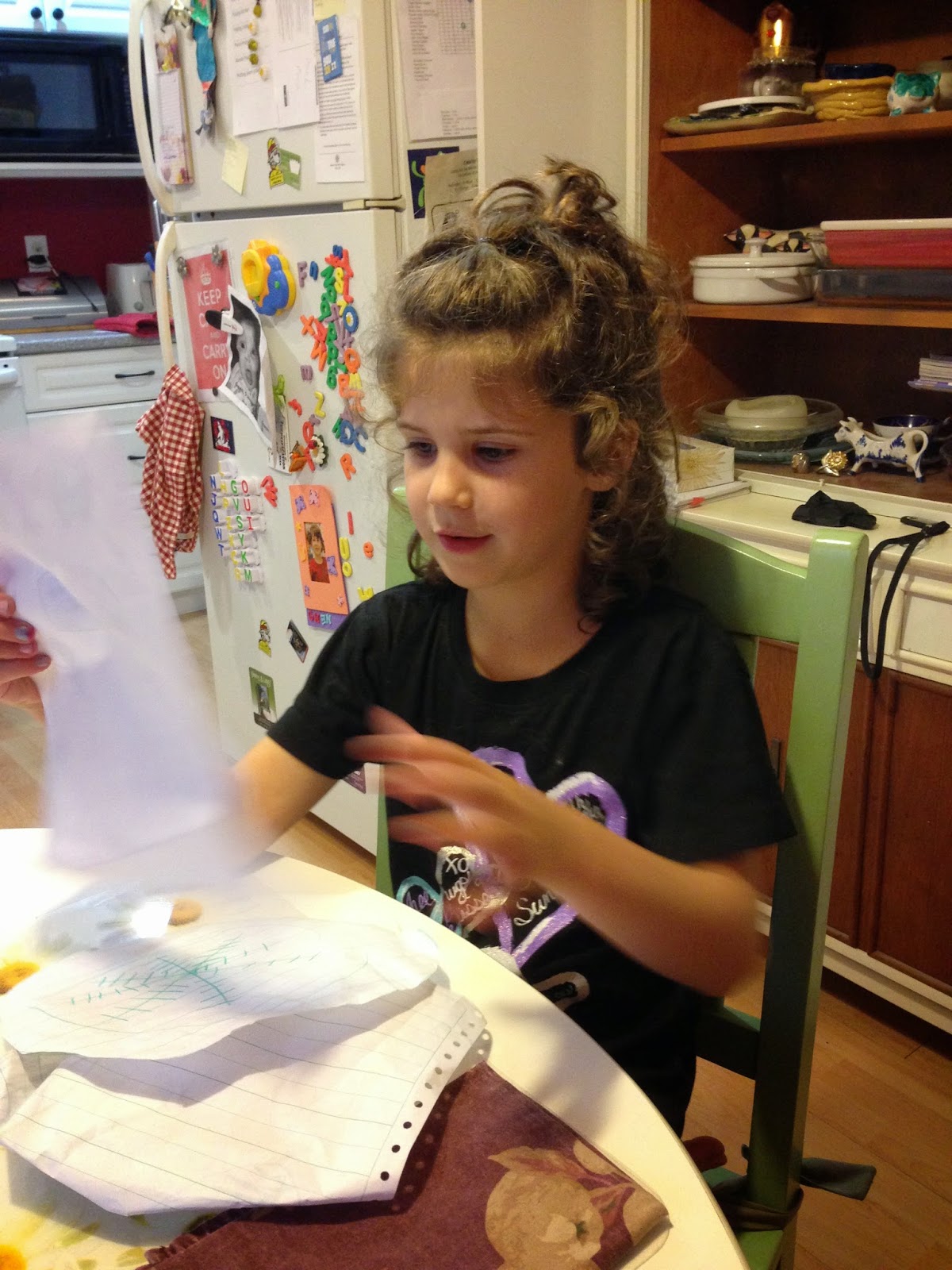 For the most part, you continue to be a very joyful and exuberant child, and you make us laugh all the time. Here is the latest joke you made up:

What is a muscle man’s favourite donut?
A strong john!

A few days ago, you told me you wanted to have a private conversation with me. You said, “I’ve noticed that you are giving Dad way more kisses than you give me. And I thought, ‘Does Mom love Dad more than she loves me?! I thought she loved us both the same!’” It was very very hard not to laugh at this charming display of rivalry (I guess sibling rivalry comes out this way in only-child families!). I assured you that I do love you and Dad very very much, but in different ways, and that you could ALWAYS come ask for a hug or a kiss or a cuddle anytime you needed one, in addition to the dozens I give you without your requesting them. I hope you are feeling equally loved, now! 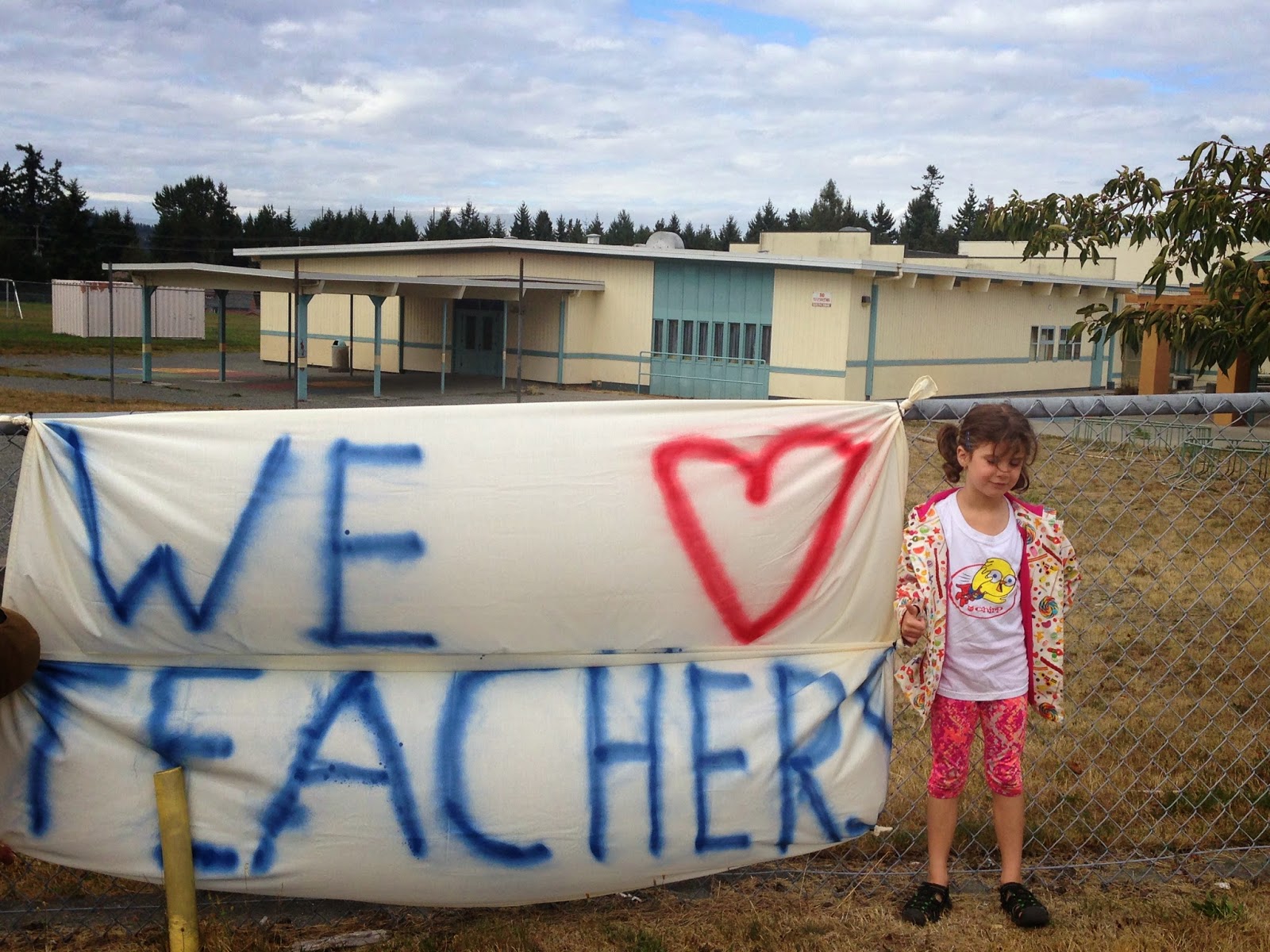 It’s been a very long and strange summer with the teachers’ strike, and I wasn’t sure you’d get to start Grade One this fall at all. You got a nice grounding in political activism when we went to a few different rallies and posted enormous banners at your school to support your teachers. We also bought you a Grade One curriculum book and started working through it a few pages at a time. This extended break allowed me to see how very, very smart you are – academics are not going to be a problem for you at all. Your reading is stellar, your writing – though messy – is appropriate, and your math is incredible. A day of baking helped you learn fractions, and you grasped the concepts of ‘greater than’ and ‘less than’ immediately. 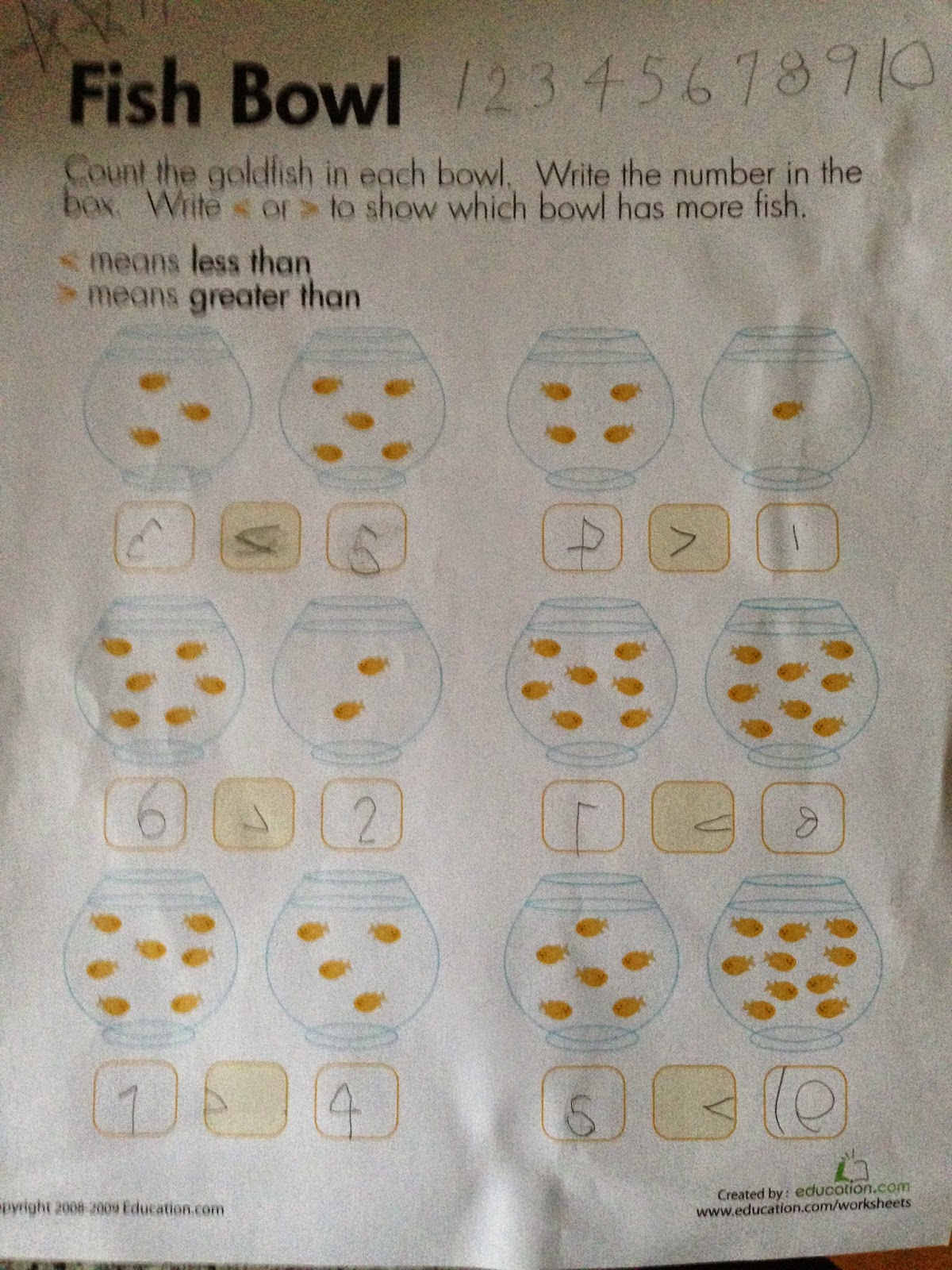 We were all really excited on your first day of school, though you were a little nervous as well. You wanted me to stay with you until you were ready, and I was happy to do so. Once we got to the school – all the kids and parents assembled in the gymnasium – you felt a little better as you started to spot some familiar faces, especially the beloved teachers you’d missed saying goodbye to at the end of last year. We gave them lots of hugs and appreciation and some Dollarama gift cards to help them supply their classrooms. We’re not sure yet who your teacher will be or which classroom you’ll be in, but by the time I said goodbye you were excitedly hugging all your old friends from kindergarten and looking very happy about the day ahead.

Last weekend, you woke up one morning calling me piteously from your bed. “Mama! Mama! My mouth is so dry I think I’m turning into a cactus!” Your appetite and energy were low, which is always a sure sign of sickness, and a low fever followed in the early afternoon, so Dad took you to a walk-in clinic where you were diagnosed with strep throat. That was the easy part. The hard part is getting the medicine into you. You are supposed to take 5 mls of medicine three times a day, and each dose can require up to an hour of full-on bodily fighting with a very limited success (e.g., only 70-90% of the dosage goes into your body). At one point I was trying very hard to pin your arms and force your mouth open, which didn’t work AND felt absolutely awful. It doesn’t matter how much cajoling we do beforehand or how much ice cream, peanut butter, or other rewards we promise afterwards – you get yourself wound up about how awful it’s going to taste, and you just can’t make yourself co-operate. Though I’ve explained it to you several times, if you would just open your mouth and let me get the medicine in, it would all be over in ten seconds, but you just can’t do it. As I was trying to explain to your Dad (who has even less patience about this than I do), you are young enough that you lack the understanding we, as adults, have that sometimes you have to do something shitty for a moment or two (or, sometimes, longer) in order to have a long-term positive effect. After a day and a half of this battle, Dad went back to the pharmacy to see if we could get the same medicine in pill form, as you can actually swallow pills pretty successfully (thanks to melatonin, which you take occasionally to reset your sleep schedule). He couldn’t get a swallow capsule – they were too big – but he got a chewable, which you choked down at your next dosage time and insisted it was almost as bad as the medicine. We’ve now just accepted that grinding the pill up and mixing it in ice cream – even at breakfast time – is the only successful way to get the medicine into you. The take-away here, kid, is HOLY SHIT DON’T GET SICK because dosing you is a NIGHTMARE!! 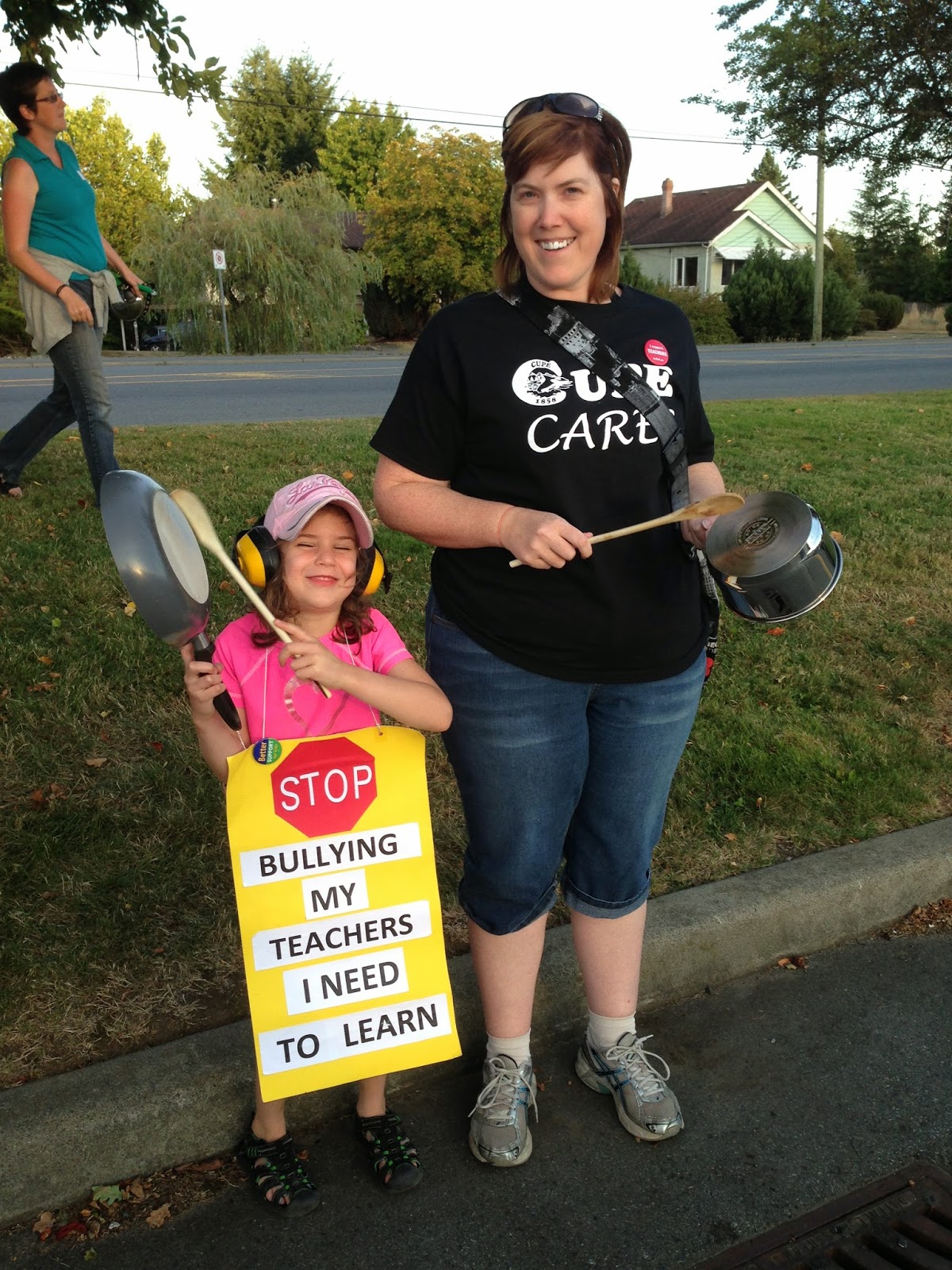 Your third day of taking the medicine was also your first day back at school. In theory, you are supposed to take a pill at lunchtime, so I sent one in your lunchbox. I didn’t really expect you to take it, without the forty-five minutes of nagging and bullying beforehand, but you proudly told me that afternoon that you had. I heaped you with positive reinforcement and immediately invited you to do something you’d been wanting to do for weeks: painting each other’s nails. We enjoyed a lovely time together and I told you often how proud I was of you for taking your medicine.

That night, of course, we found out you’d been lying.

That was (as far as we know?!) your first big lie to us. We were both furious and devastated that our trust had been betrayed. I honestly thought you would do the same thing with your medicine that you do with a good half of the lunch Dad packs you every day: leave it untouched in your lunchbox. The idea that you had the forethought to go put the pill in the garbage – for this, you confessed that evening, is what had happened – upset me so much. Now we had TWO problems to solve: disciplining you for lying, and STILL struggling to get you to take the damn medicine! 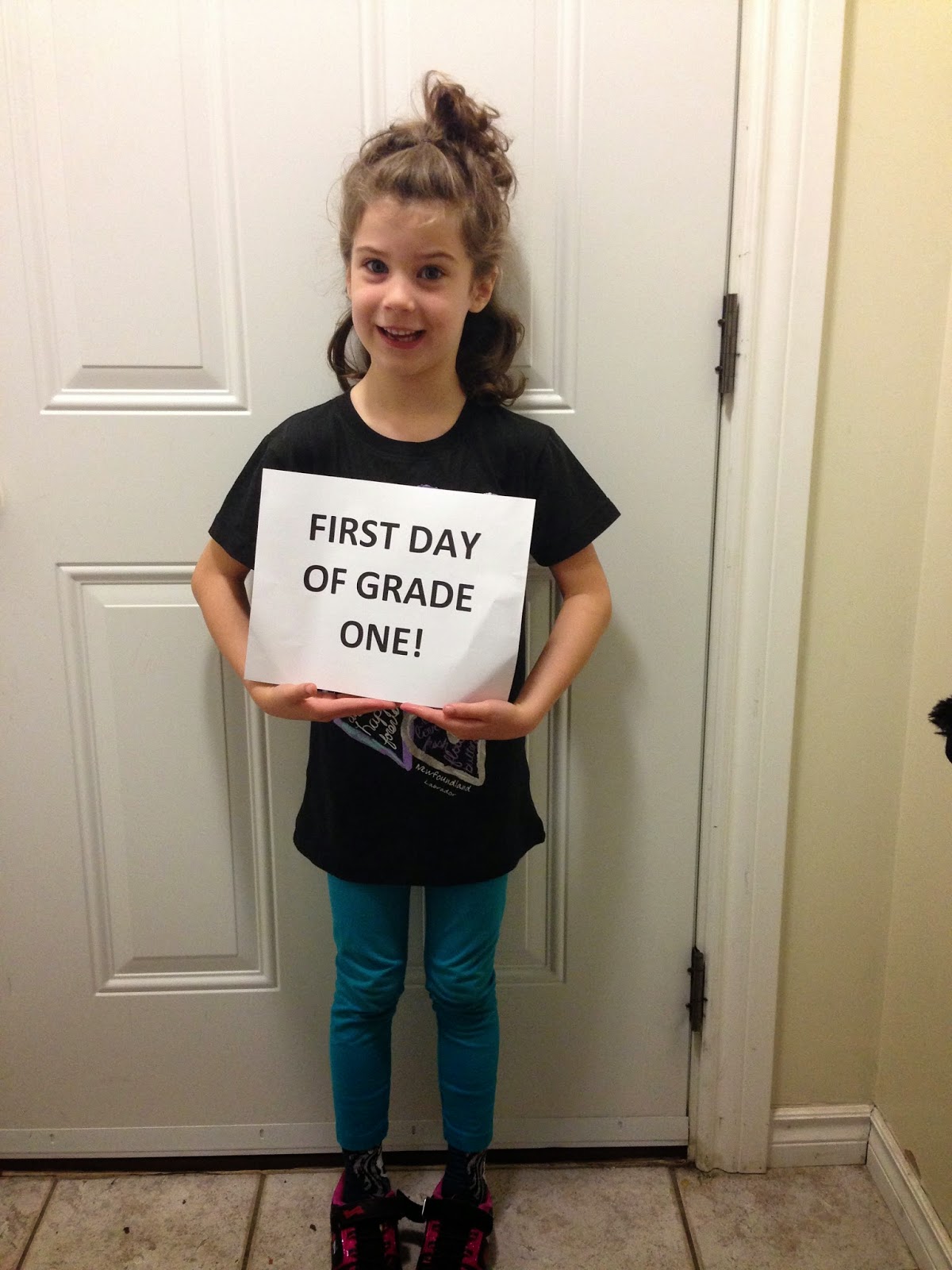 Well, that's enough ranting for one letter ... we love you very, very much and are so glad you are our daughter. (We are also glad, these days, that there is only one of you.) Here's hoping the next month will see a settling into routine and an evening-out of behaviour.

PS Tooth#3 fell out on the first day of school!
Posted by adequatemom at 7:14 PM

Wow. The public shaming at karate seems WAY over the top to me. I would have walked across the room, picked her up, and stormed out. Yikes!

Thanks for your comment, Sally. At one point I asked Chris if I could go get her - I sort of bow to his knowledge about how dojo culture works. He told me not to. It was awful to sit through.