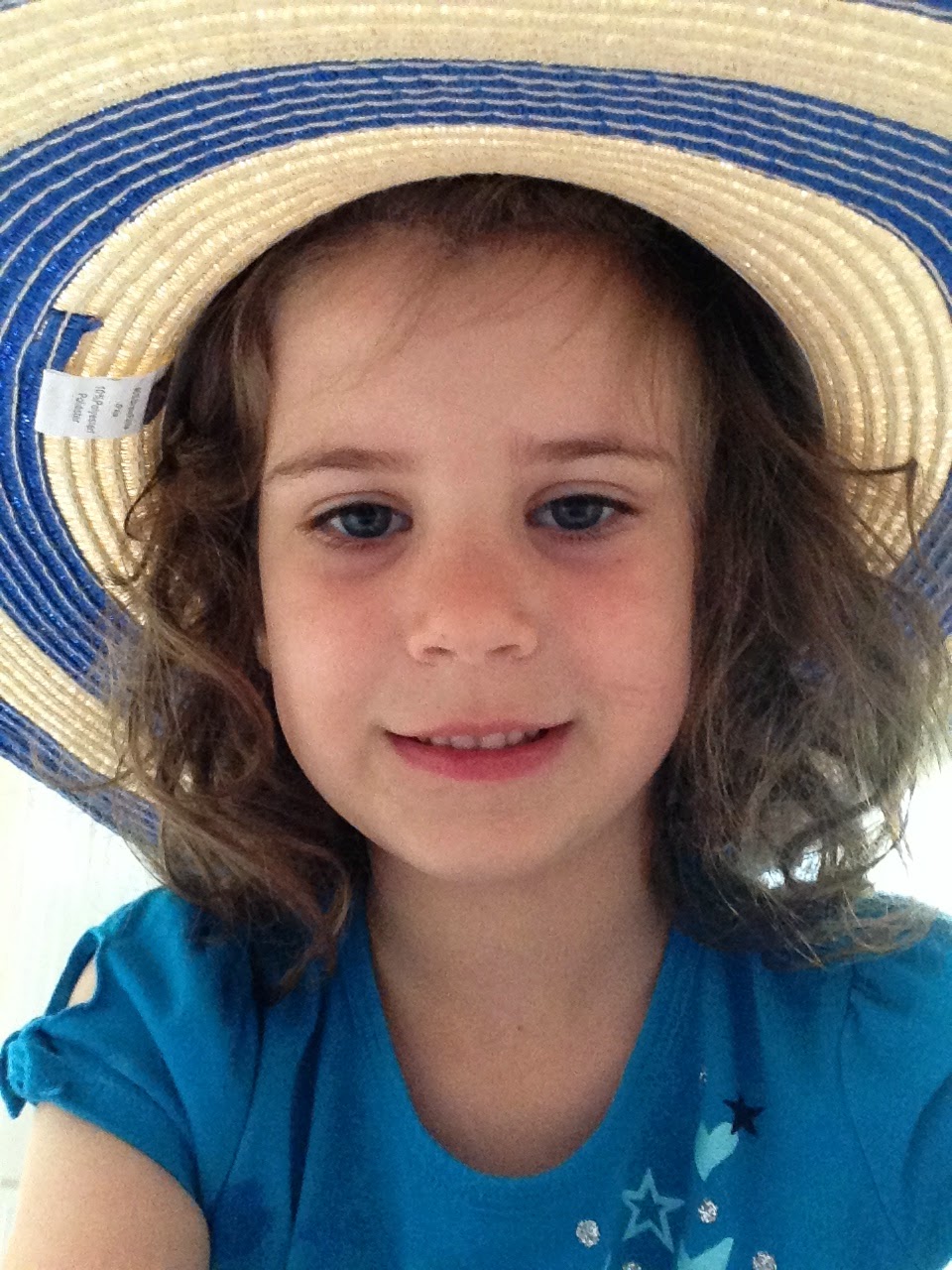 I get the unique experience this month of having spent time away from you – a whole week! – right before your newsletter was due. This means that it was really obvious for me to see how much you are growing and learning – when I got back from my trip, I could see you had changed a lot while I was gone.

You can completely and totally read now. And you love to read! I’m encouraging you to read any time, any place, at any moment that you formerly would have requested to play on my iPhone or watch a show. I’m trying to have books available to you at all times – for example, I found a small backpack and filled it with some of your books, then put it in the backseat of the car. This has been a big hit, and you’ve already brought the backpack into the house and restocked it with new favourites after reading the original collection. I present reading as the permanent alternative to boredom, which it has always been for me, and you are definitely pretty happy about never being bored again, as you HATE being bored. So, reading is a huge part of your life now, and we are all thrilled about that. 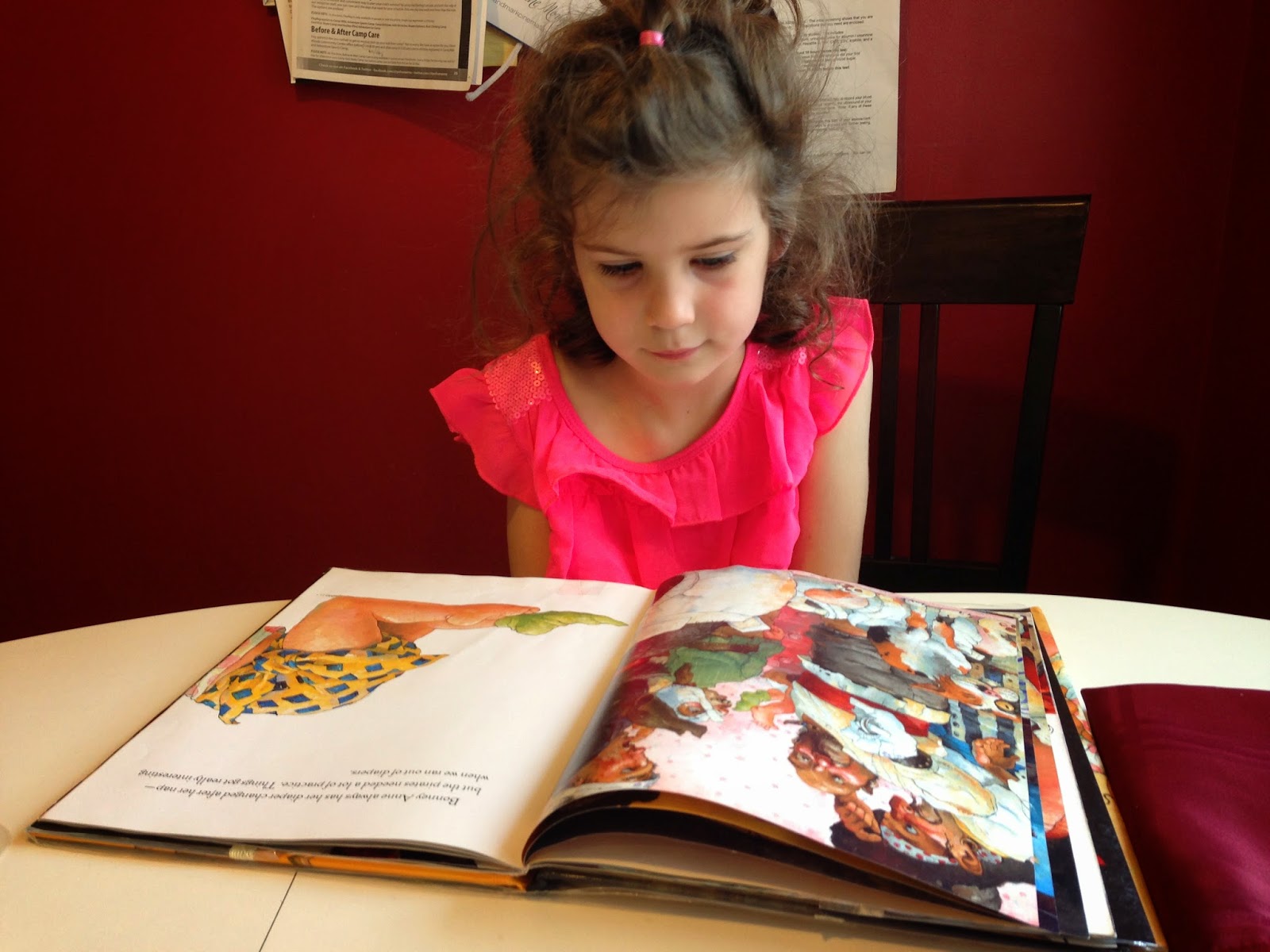 Two months ago, you would read most sight words but get frustrated and quit when you ran across a word you didn’t already know. One month ago, when I asked you how your TA helped you read at school, you told me how she used her finger to cover up most of an unfamiliar word, revealing one letter at  a time as you sounded it out. Now, you will do this yourself with your own finger. You are a reader, and it’s true, Gwen – you never need to be bored again. 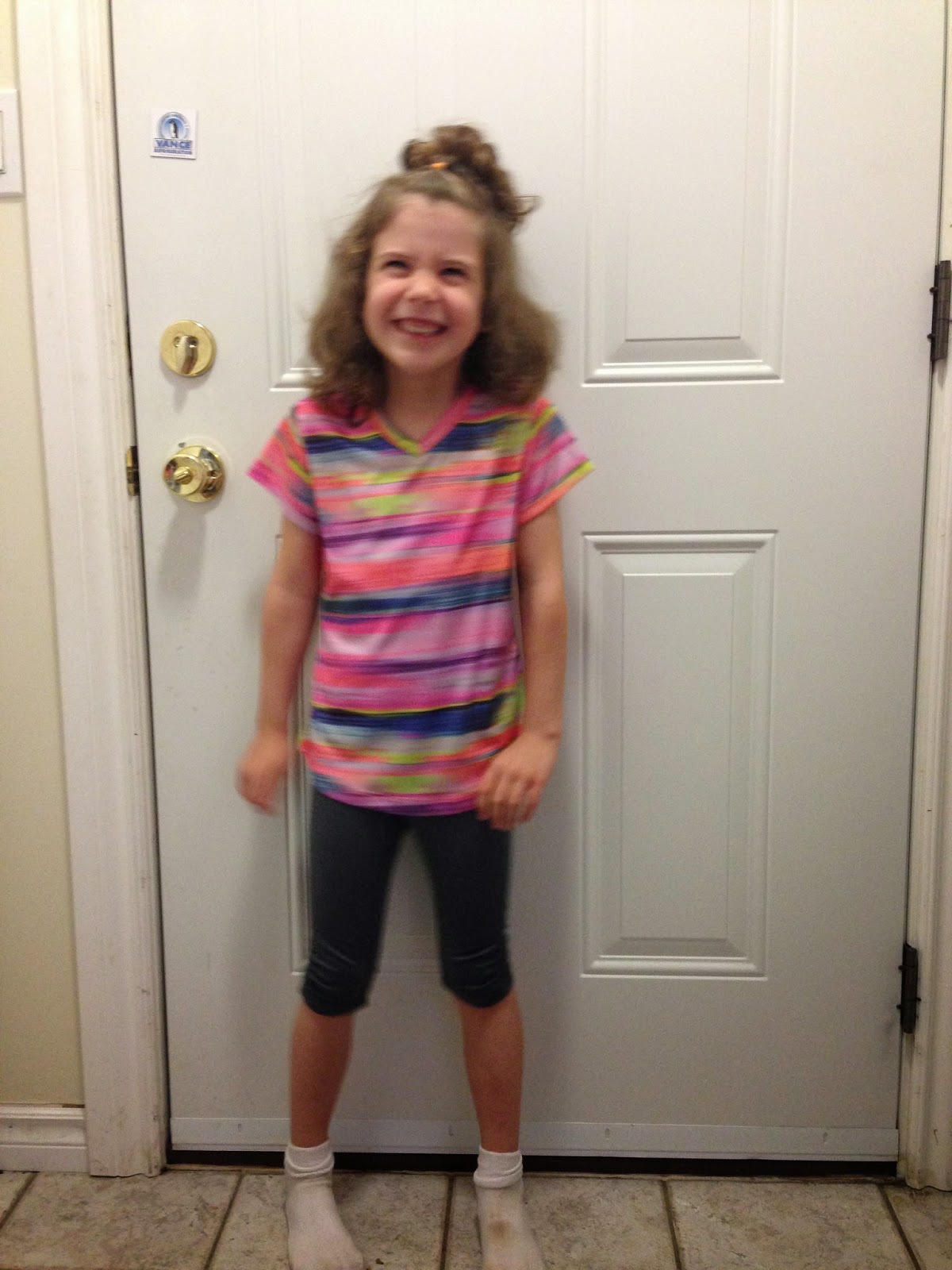 Before I left on my trip, the whole family got to go see Cirque du Soleil in Vancouver, performing the show “Totem”. It was absolutely amazing. I think this is my 7th Cirque show, and it is possibly my favourite. The trapeze act alone was just so charming and original. And, well, there was a Jaws reference, so I’m pretty much obligated to love the show. It was also a lot of fun to watch you reacting to your first Cirque experience. I think most of the time, you were too enthralled to even applaud! One of the acts you were really taken with was a clown who had tin pots of various sizes attached to his body, and played music by bouncing a ping-pong ball on the different pots. When you got home after the circus, you spread out all our pots and pans to experiment with the technique yourself. 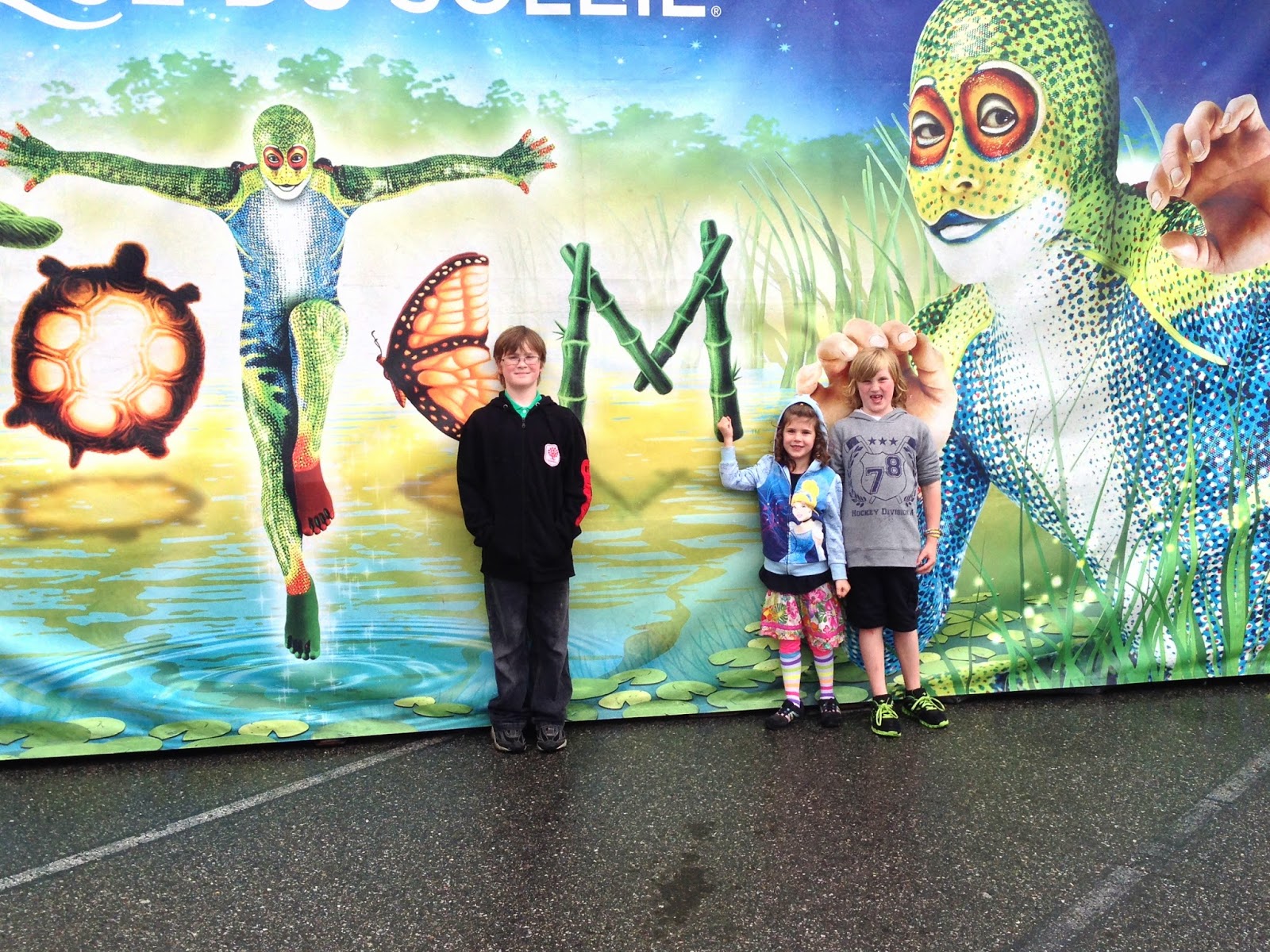 This month has been marked by a charming obsession with “Philadelphia Chickens”, a book and CD set of “the imaginary musical revue” by Sandra Boynton. The songs are hilarious, and you know every lyric – which isn’t surprising, since for several weeks you insisted on listening to that CD every time we are in the car, and also while waiting to fall asleep at night. Now in the car we don’t listen to the CD – we don’t have to, because you can perform the whole CD yourself. It’s pretty terrific to hear you singing the various musical styles – show tunes, barbershop, jazz, blues, ballads – with all the enthusiasm and joy that you bring to everything you do. Your musicianship is improving greatly with all the practice! 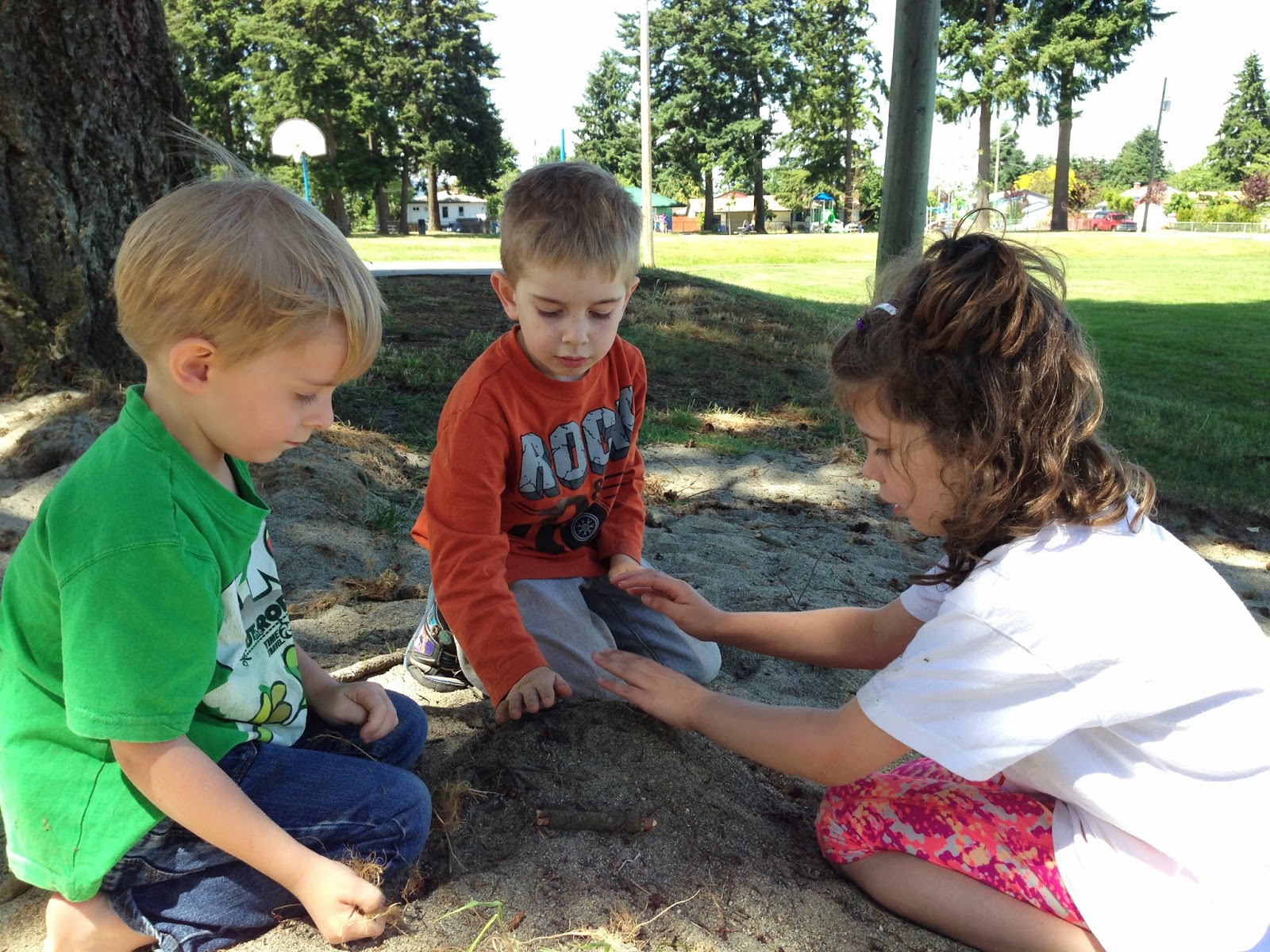 Your piano lessons have wrapped up for the year, and I for one could not be happier about that. Towards the end of the year, classes were becoming quite a source of drama and conflict for us. I saw you constantly struggling with keeping your focus on what was in front of you rather than the highly distracting environment (five other kids and their parents) around you, and you often lost. When you made mistakes or got too flustered, you would refuse to play at all, and sometimes tears would ensue. It wasn’t exactly the positive experience I would have wanted you to have. That said, though, you never wanted to quit piano, and you had lots of triumphs in the program. This year you learned to play with both hands at the same time, to share the melody between hands, and to play “bridges” (fifths) with the left hand. You also learned the G scale and two A minor scales (harmonic and natural), so you’ve been introduced to a few sharps, and many new musical terms: octavia, loco, and DC al Fine, for example. You chose to play your own composition, “Droplets”, for your year-end recital. As always, you were composed and self-possessed on stage during your introduction and performance. We were so proud of you! 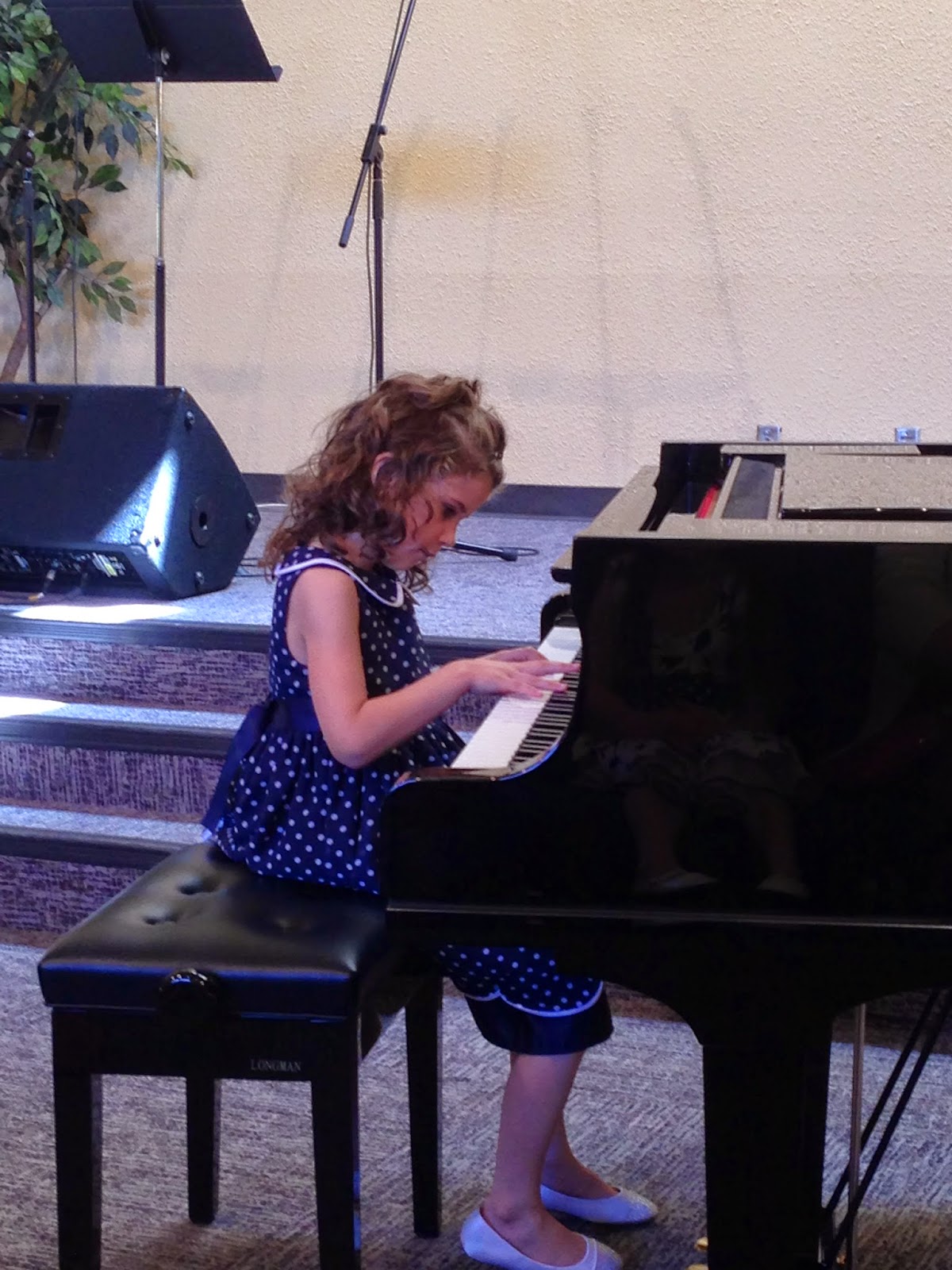 Your other extra-curricular activity, karate, does not end for the summer, but you did get to attend a cool semi-annual event where you got the opportunity to compete on teams and receive medals for your performance. I was really glad you got to participate in this: getting you to your 4:15pm class has been a real challenge for us now that both your parents are working (Dad has a summer job at the university), so you haven’t have the opportunity to grade in karate for quite a while now, and that has caused some frustration and disappointment for you. The summer class actually has a better schedule, so hopefully you can attend class more regularly and make up some ground over the next couple of months. 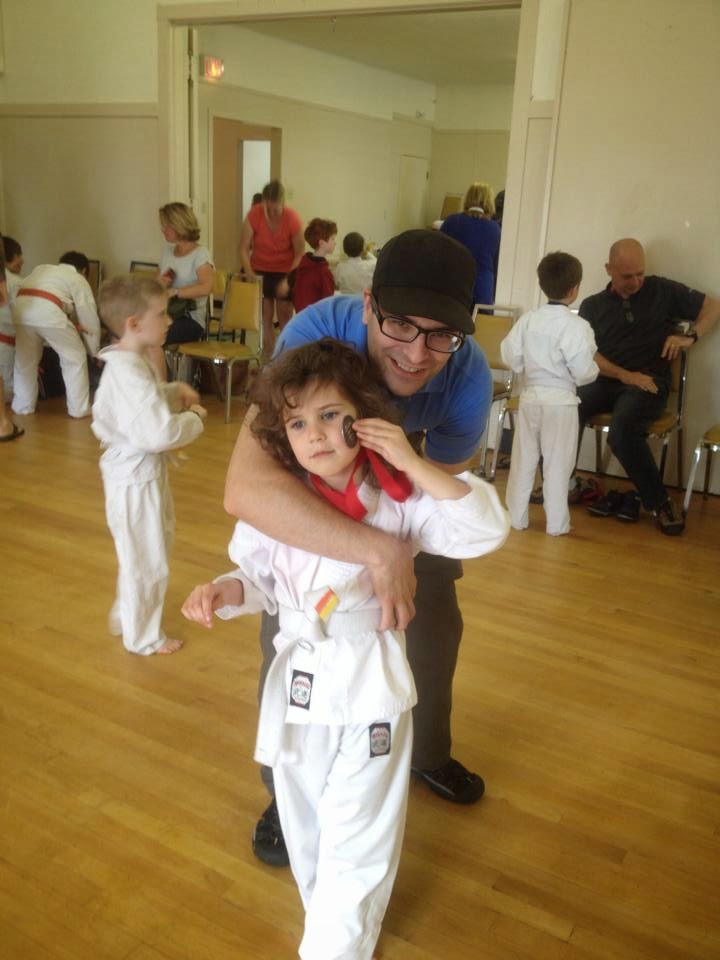 Kindergarten has ended for the summer – rather abruptly, unfortunately, due to a teachers’ strike. Your dad and I support the teachers, and have tried to explain the strike to you in terms you can understand: that there are people who are bullying the teachers, and that the teachers won’t go back to work until the bullies stop. I’ve also talked about the teachers not being able to have the things the students need in order to learn. A couple of days ago, we got the chance to attend a rally and show our support for the teachers publically, which I was very excited about. We were part of a crowd of some 700 people marching through town with a police escort, proudly carrying our signs. Later in the walk, your usual “independent spirit” took over and you bolted away from me through the crowd. There was no way I could maneuver my way through the people in order to find you, nor could I make myself heard to you over the noise. Once or twice you surfaced, looked around and caught my eye, then raced away from me again. It was rotten, crappy behavior, and that kind of defiance is becoming more and more common from you, I’m sad to say. After a few minutes we found each other again, and all was well, but man was I mad. And you didn’t seem to understand why, or really care. 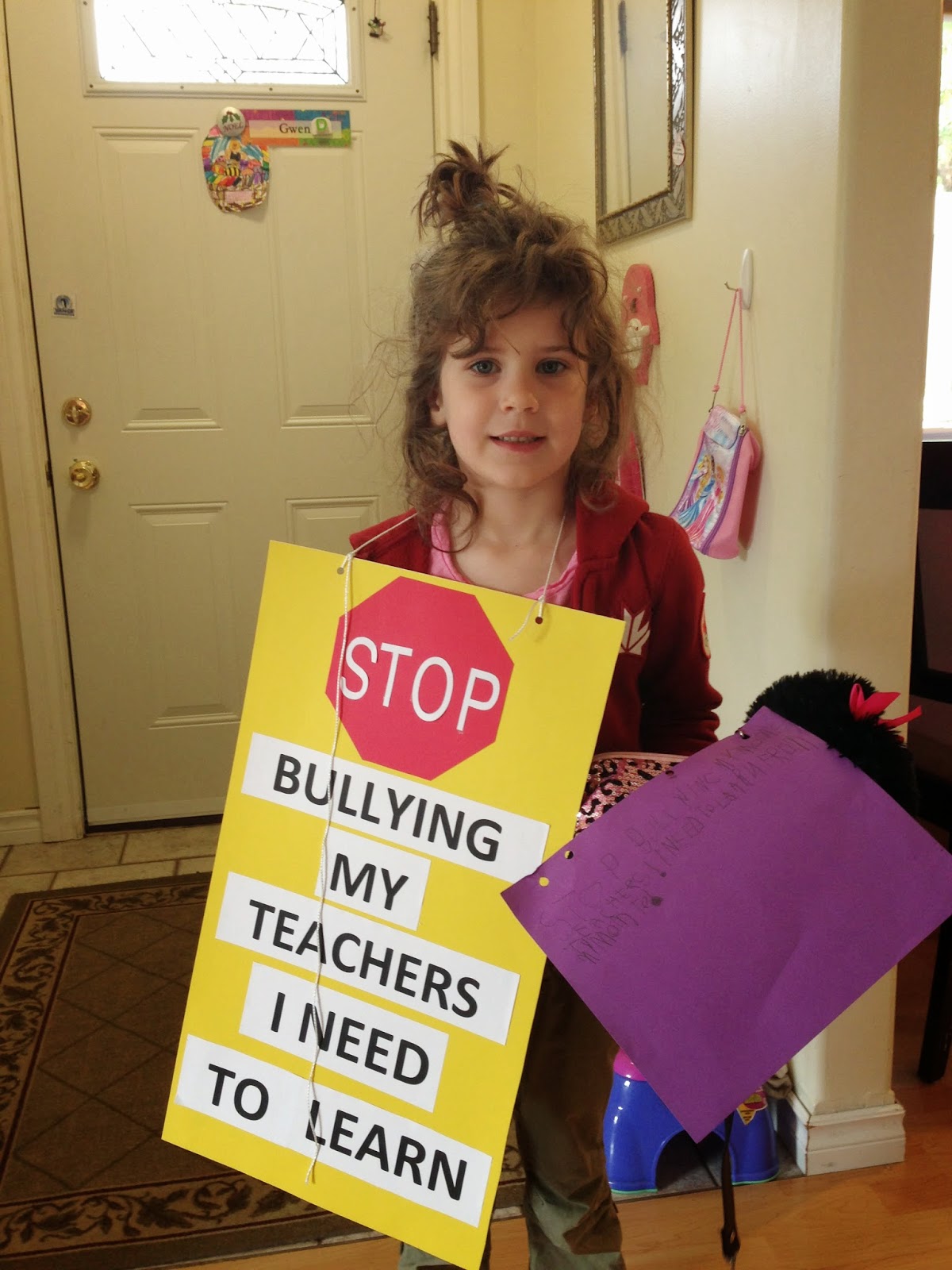 Anyway, as I was saying, kindergarten is all done for you now, though unfortunately you won’t have your final report card until the strike is resolved (which doesn’t seem to be on the horizon any time soon). I think it’s safe to say, though, that you’ll be going on to Grade One in the fall (or at whatever point the schools return to full-time operation). I don’t think they can fail a kid who can read!

So, next week it’s on to summer activities. You’ll be spending one day every week with Gramma, and the rest of the week with a summer daycamp through Parks and Rec. For the next two weeks, you’ll also be taking swimming lessons every day after camp. These activities should kick off your summer pretty well! 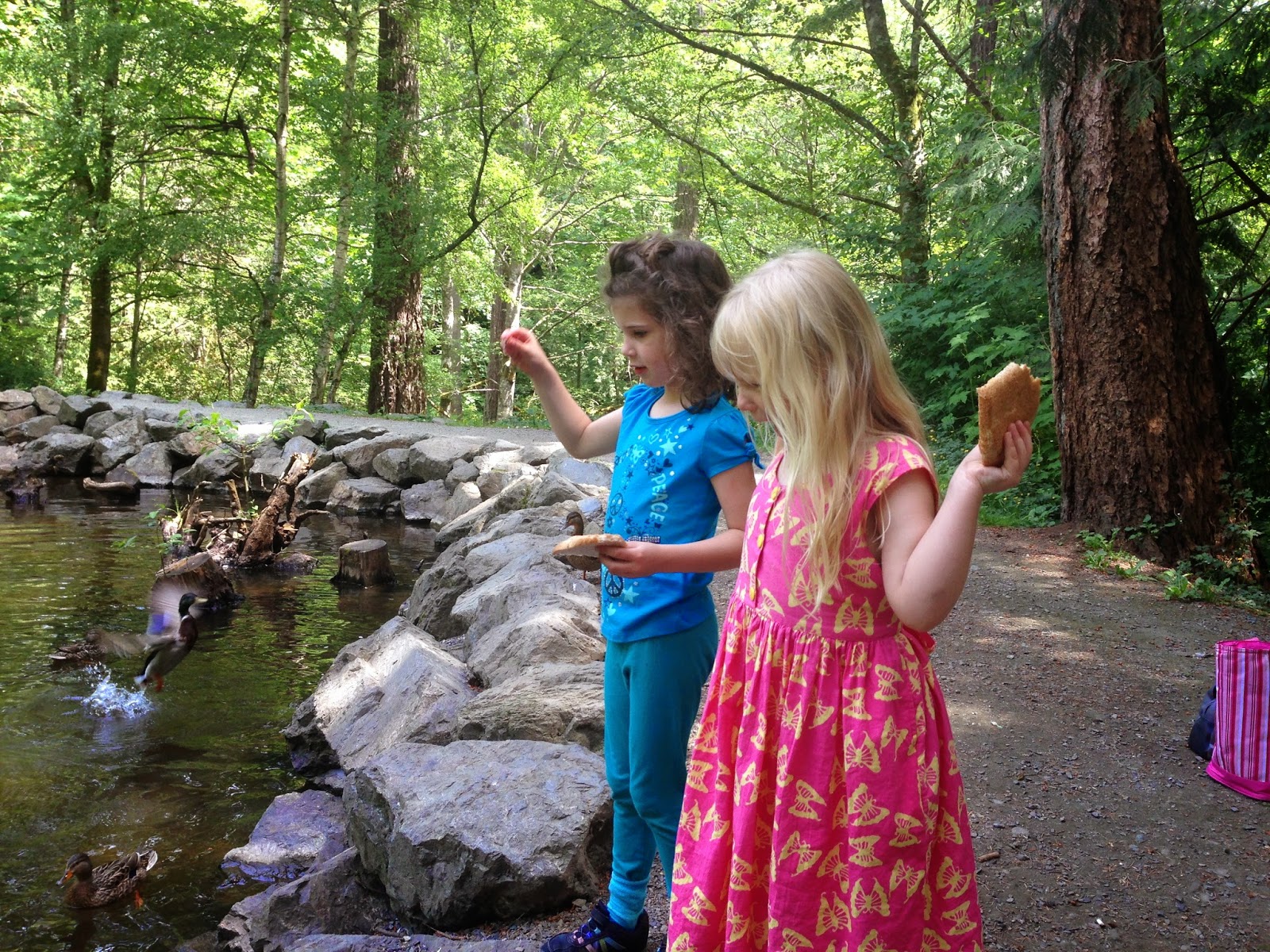 Well, I guess that’s it for this month, Gwen. As always, I love you as far as the moon, bigger than space, and a million, billion, kajillion and six. 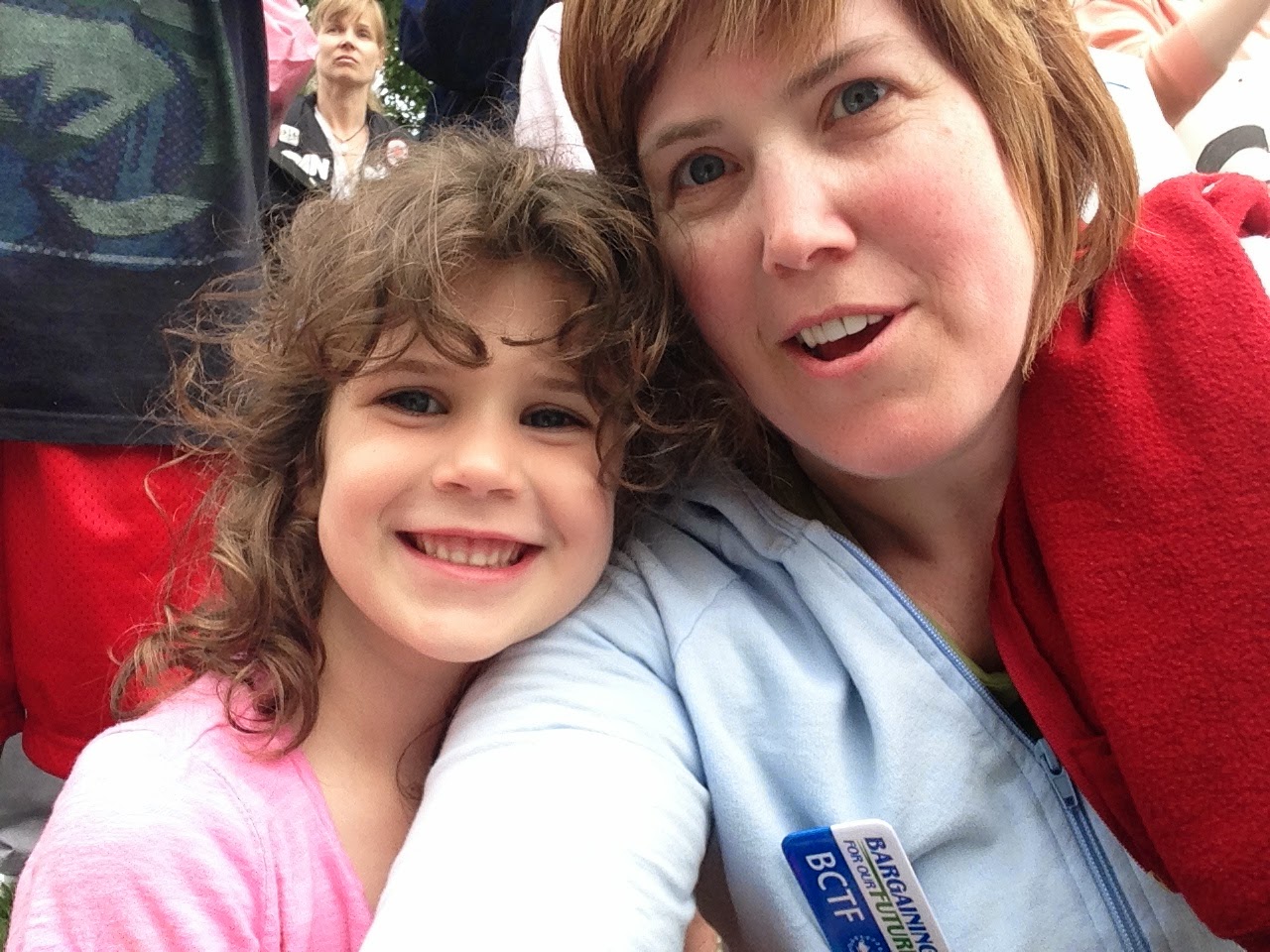