Today you are sixty-five months old. 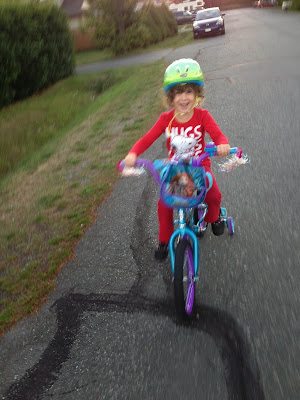 You always amaze and astound us with your incredible personality and unique perspective on the world, but two particular events this past month have me completely in awe of your strength and abilities.  First, you started kindergarten.  You and I had agreed that on your first day, I would stay with you as long as you needed me to, and you had even told me exactly what you were going to say when you were ready for me to leave (“Mom, I’m okay now.”)  We had practiced getting out of bed early and doing your morning routine without (as much of) the dawdling, arguing, and whining that usually accompanies it, and as such you were ready for Day One of Kindergarten a full 30 minutes ahead of schedule.  So we went to the school early and you played on the playground.  When it was time to line up in front of the doors, the kindergarten teachers came out and called each child by name.  Your name was called and you took your place, looking so small and yet so big with your backpack and your ponytails.  When all the names were called, the teacher surprised us both by instructing the students, “Now, say goodbye to Mommies and Daddies, you’ll see them at the end of the day.”  I was immediately saddened by the lost opportunity to share this milestone with you, to together discover your cubby, your coathook, your classroom … but more than that, I worried that this deviation from our arranged plan would throw you off.  Not for a second.  You gave me a big hug and a kiss, said goodbye, and followed your classmates into the school without a backward glance.  Probably easiest on students and teacher, I thought, to make a clean break of it, start as you mean to go on.  And you handled it beautifully.  Every time high expectations are set for you, you exceed them with ease. 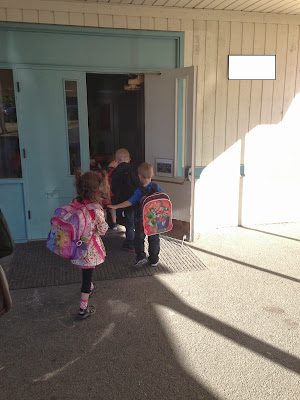 And you LOVE kindergarten.  You love it!  You talk about it constantly, telling me all about what you do at school and who you play with and where you go.  You talk about your Big Buddies (older students who come and do art with you) and Library Days (oh! The joy of borrowing a book from your VERY OWN SCHOOL LIBRARY!) and the songs you sing (A you’re Adorable, I’m a Pizza, Four Hugs a Day) and what the Superstar is (the person who gets to help the teacher with the day’s calendar) and how you get to be one (“sit really straight and do The Five”).  Kindergarten is your favourite thing ever and I am so incredibly happy for you that you are doing so well there.  And feeling like I shouldn’t have ever considered any other possibility. 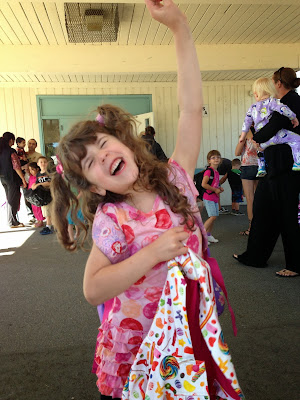 Then, a week later, you fractured your wrist.  You were playing outside after school, waiting for the after-school program’s bus to come pick you up (and can I just digress, for one second, to note that you have transitioned from lazy days of being taxied around by Mom and Dad for three or four days of summer camp a week, to five days a week of rigidly scheduled before-school care / full-day kindergarten / bus transport to after-school care without a hiccup?) when … something happened.  Your description of the event was, “I was standing on some dirt, and I fell onto the curb, and my wrist went too high.”  Which I’m guessing means that it bent backwards, in some fashion, but it is a complete mystery to anyone involved how you fell off some dirt badly enough to get significantly injured.  A school secretary was on hand (it is still not clear if she actually saw the fall, or just came when you burst into tears) and she assessed you; you were also assessed by a visiting firefighter who I’m guessing happened to be on hand doing some sort of fire safety presentation to the school (these are the random things that happen in the world of elementary school!).  Anyway, although you were crying pretty hard and did not want to get on the bus, the secretary convinced you to do so, and then called my cell phone and left a message letting me know that “Gwen got a bump on her arm today after school, she is fine but just wanted you to know what happened in case she talks about it later.”  (I did not get this message until about 45 minutes later, because I do not answer my personal cell phone at my new fancy-shmancy job.  But even if I *had* gotten that call, I probably wouldn’t have done anything, because she was painting a very clear picture of So Not a Big Deal, Nothing to Worry About. 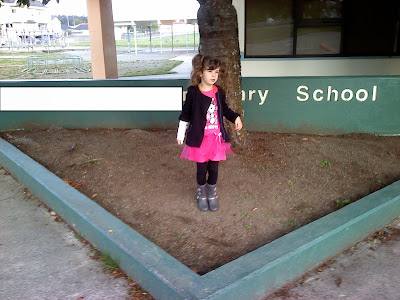 But forty-five minutes later, it was quiet in my office and I just happened to hear my phone buzzing in my bag, and although I didn’t find it in time, I did see the name of your elementary school listed on the Recent Callers list.  And darling Gwen, as every parent knows and as someday you may know, nothing strikes cold vacant fear into the heart of a parent like seeing the name of the person entrusted with their child on the call display.  Because that call always means something is wrong.  The second call I’d received was from the after-school program, who left a voicemail telling me that you had been at the centre for forty-five minutes and had yet to stop crying.  “I’ve never seen her cry like this,” the leader reported, and fancy-schmancy job or no, I was grabbing my coat and keys and calling your dad to come meet me with the car so we could go pick you up.  (Exciting superhero imagery aside, it was only about ten minutes before I was due to leave work ANYWAY, but that’s not the point.  I think.)  We raced off to the centre to meet you, and when we arrived you were no longer crying but it was obvious from your red streaky face that you had cried, hard, for a long time.  A girl named Harmony was sitting with you, reading one book after another to you in efforts to comfort (distract?) you.  Another child was fetching you snacks from a nearby table.  Even in my worry for you, I had time to think about how you were no doubt reveling in being waited on this way!  After thanking the program leaders (and Harmony), we got you into the car and headed for the ER.  You fell asleep on the way there, no doubt exhausted from all the stress. 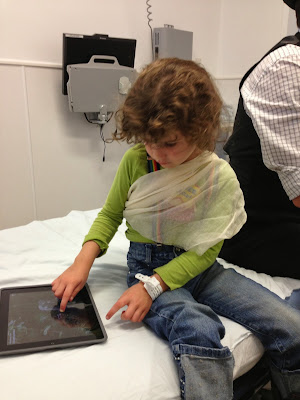 It was a long, long wait in the ER.  The thing we needed, obviously, was an x-ray, and there was a 3.5-hour wait for the machine.  Every thirty or forty minutes either your Dad or I would say, “She’s fine.  She’s obviously fine.  She’s not in any pain.  We should go.  This is ridiculous.”  And the other one of us would say, “We’ve been here (x) hours already.  We might as well wait.  I don’t want to have to come back tomorrow and start all over again.”  So we waited.  I really did think that you were fine.  There had been no tears and no complaints about pain since we had picked you up.  You were happily playing games on the iPad, using your sore hand without incident to poke at the screen.  It couldn’t possibly be broken, right? 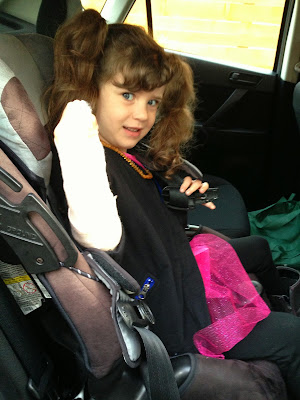 We finally got the x-ray, and then waited almost another hour for a doctor to examine the x-ray.  Just as the doctor entered the room to give us the diagnosis, you told us you had to go to the bathroom.  Of course!  What timing.  I quickly took you to the nearby bathroom, and as I turned your hand over to wash it (quickly, quickly, doctor is waiting) you howled in pain.  Ohhhhh.  So THAT’S where it hurts.  And how close we were to just blowing the whole thing off…! 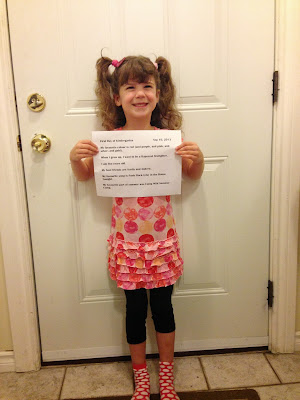 The doctor examined the x-ray with us and showed us where the break was.  I badly wanted to take a picture of the screen with my smartphone so I could blog it for you, but I restrained myself.  There was a tiny little ‘buckle’ break just at the front of your wrist.  He set it in a fiberglass splint, wrapped it in a tensor bandage, gave us some instructions, and sent us on our way.  It was an hour after bedtime by the time we got home.  I helped you take off your shoes and coat, my mind racing with getting you into bed and then getting everything ELSE done that hadn’t got done in the past four hours.  You asked, “So, what’s for dinner?”  I forgot the other chores, sat and spoonfed you chicken noodle soup. 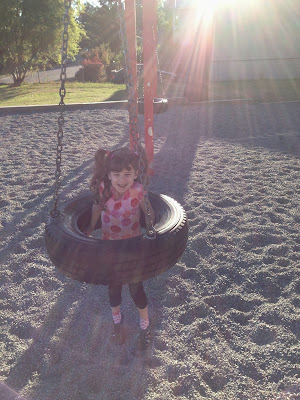 All that night I worried and wondered how you were going to deal with your injury at school the next day.  You loved kindergarten so much, and were getting on so well!  Would you now have a negative association with school?  Would you go hungry because you needed more help, now, to open the various food containers in your lunchbox?  Would you fall behind and be upset if you couldn’t hold a pencil to write or draw?  Would you be able to get your shoes on and off alone?  What about going to the bathroom?  Yikes!  Everything suddenly seemed really complicated. 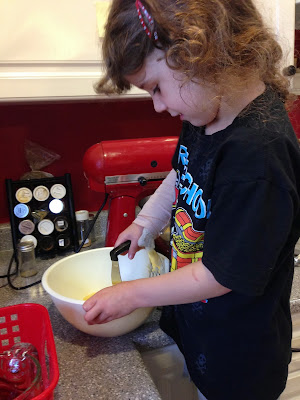 I suppose the thing to say is that someday I will learn not to worry about you, but in truth, I don’t expect I ever will.  It’s part of my job as Mom to do the worrying.  But even if I can’t manage to not worry, I certainly have learned to laugh at myself when I do.  Because you woke up the next day ready as always to head off to kindergarten.  There was no question of you wanting to stay home (in secret, we had Gramma on standby in case you weren’t up to it).  We talked a bit about having to do things differently while your wrist healed, and you practiced what to say to people who asked about your arm, and how to ask people for help when you needed it.  And then off you went.  Before-school care, full-day kindergarten, bus to after-school care.  Little Miss Independent, and never a complaint was heard. 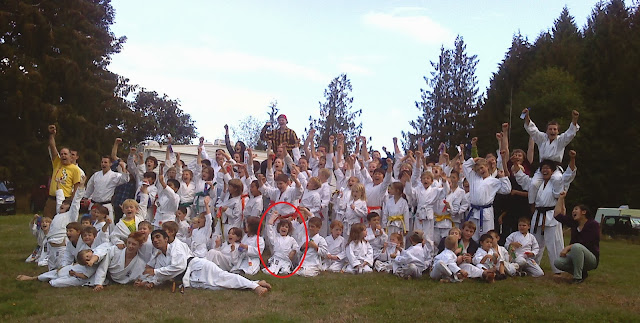 I guess those two stories have taken up my whole letter this month, Gwen.  Well, that’s probably quite accurate – in years to come, when we look back on this time, we will remember little else besides the start of kindergarten and the first broken bone.  Believe it or not, there have been other amazing moments, too – like the time you told me, “I’d prefer if zombies ate flies, so that there wouldn’t be any flies in our garbage can.”  What’s more fascinating about this sentence – the adult tone in the word ‘prefer’, the imaginative repurposing of zombies, or the random ignoring of the fact that zombies don’t live in our house?  These are the types of questions that one must ask, if one is to embark on a life with Gwen.  And I am so very, very glad that I have. 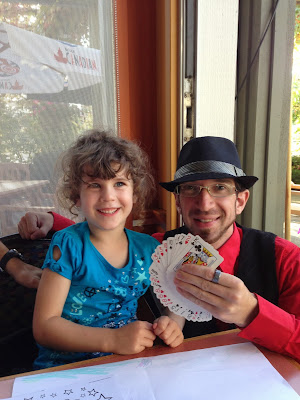 Love you always, my astounding girl.

Love,
Mama
Posted by adequatemom at 7:57 AM