When I was a kid, I was accident-prone.  I know because I was told so all the time, and frequently heard my mother say it to other people about me.  I actually thought this was a real thing, like being asthmatic or allergic.  "Oh, of course she got hurt.  She's accident-prone."  Now that I have my own kid, I am starting to think that "accident-prone" is just a fancy way of saying "has no damn sense".  Here is a round-up of what our Gwen managed to do in one week.
July 19, we went to the neighbourhood park (actually a closed elementary school) after dinner to play with a friend.  Said friend was complaining to his dad that he didn't want to wear shoes, and dad was insisting that he wouldn't be safe without them.  Meanwhile, Gwen was playing some distance away, waiting for the argument to be over so she and her friend could go play on the swings.  She started fussing and carrying on and as I walked towards her, she was trying to take off her shoe.  I thought, Oh, she's got a rock in her shoe or something.  When I reached her, she did report that there was something in her shoe, hurting her.  I took the shoe off and looked inside.  I could see something sticking up into her shoe but couldn't tell what it was, so I flipped the shoe over.  It was a large triangle of glass that had poked all the way through her running shoe and into her foot, puncturing her big toe right at the crease where it joins the foot.  I have never seen anything like it, a piece of glass going all the way through the shoe like that!

Once Gwen saw the blood she REALLY started to freak out, and of course I had nothing with me in the way of first aid supplies, not even a Kleenex to wipe up the blood.  Fortunately I did have a water bottle and so I poured water onto the cut to clean it up and assess how bad it was.  Though at first it looked like a significant gash, it turned out to be more of a small (though fairly deep) puncture.  Right away I knew no trip to the hospital was needed, as there would be no need to stitch up such a small wound.  So I carried her home (with a brief trip to the swings to cheer her up) and got her bandaged and into bed.

The interesting coda to this story is that Chris suggested I call the City and/or the School District to let them know there was glass at the park.  I did so, and the School District parks maintenance people took the complaint quite seriously, asking me exactly what area the injury happened in, and giving me an after-hours number to call if I ever saw anything untoward happening in that or any other school playground (we suspect the reason for the glass is that teenagers use the park for after-hours partying).  I was quite impressed with their follow up.  Oh, and I feel pretty confident that neither Gwen nor her friend will ever ask to go barefoot at the park again.

July 24, we went next door to play with our friend Lily.  Gwen was running from the back yard to the front when she tripped on their small dog and went flying across the pavement.  I was just coming around the corner, and could hear the scccccrrrraaaappppppe of her knees on the cement.  Sure enough both her knees were a total mess.  Lily's mom brought us a wet cloth and some My Little Pony bandaids, which were a hit.  Gwen is definitely one of those kids who freaks out at the sight of blood, and I kept encouraging her to look at something other than her poor sad knees while I cleaned them up.  Do you remember how an injury would always hurt worse when you were looking at it?  No?  Maybe just me, then.

The very next day, Gwen and I went out to the park again after work/daycare.  Astoundingly, Gwen climbed all the way to the top of the jungle-gym-dome-thingy, TWICE, without help and without incident.  But a few minutes later, she found this chain barrier strung across a gap in the fence that likely used to be a gate, and decided to sit and swing on it.  This did not work out so well. She fell straight back and smacked her head on the gravel.  She started to run toward me, then suddenly she (fell? dropped? lay down?) flat on the grass on her stomach and just stayed there, crying, as I came towards her.  That is not like her, and that one action scared me enough to wonder if she might be seriously injured.  I knew she hadn't hurt her spine, as she had been up and running, but I was worried about a head injury.  She did report that her head really hurt, and as she pointed to the source of the pain, I saw that the back of her head was bleeding.  I'd always heard that scalp lacerations bleed excessively, but this one didn't actually bleed much more than her skinned knees the previous day.  I did still wonder about a concussion, though, so I tried to assess her for dizzyness, blurred vision, or other problems.  All she wanted to do was cuddle me (of course), which made it hard to tell if she was tired - which could be a sign of a problem - or just upset, rightly so, after being hurt.

I called Chris at work and he was unequivocal - take her to the hospital.  I was 98% sure she was fine, but figured it wouldn't hurt to have a doctor's confirmation of this.  I carried Gwen home so I could pick up my wallet with her Care Card, and off we went to the ER.  The wait was minimal, and the doctor who saw us - Dr. Wigham - was absolutely awesome.  He put Gwen at ease right away by making her laugh a little, and I very much appreciated his efforts to do this, since he was exactly the sort of physical figure - tall, male, stranger, authority - that makes Gwen very shy and nervous.  Once he got Gwen talking to him, he asked her if he could look at her owie, which she showed him, and after asking us a few questions, he felt very confident that she did not have a concussion.  He put some cleaning solution on her head, after showing it to her first and telling her what he was going to do.  I was so grateful and impressed with his respect towards her, as in many cases another adult might just choose to speak to me and treat her as if she wasn't there, or not a real person who might want to know what he's doing to the back of her head.

So off we went home, with me feeling glad that Gwen's first of what is likely to be many ER experiences had gone so smoothly. I am well aware that we will be back, and so I feel glad that next time we need to go Gwen will hopefully feel less anxious/worried about what it will be like, since she had such a positive experience the first time.

Maybe because Chris has not been there to witness any of these incidents, he seems more worried about it than I am.  "You've got to stop taking that kid out of the house!" he told me, in a joking-but-not-really way.  But really, what are you going to do?  Keep her home, never go outside, lock her in a protective bubble?  I think minor injuries and ER adventures are all part of being a kid (of course, I would think that - I was an accident-prone kid, remember?).  But honestly, even if we never left the house she'd find some way to injure herself.  Might as well get some fresh air while you're at it. 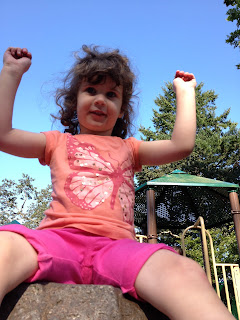 Posted by adequatemom at 7:16 AM