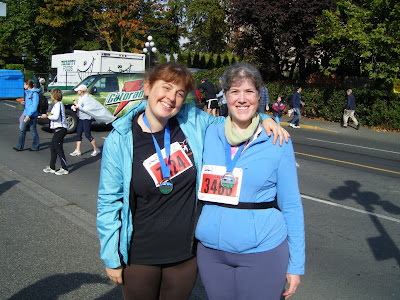 Lisa and I shortly after crossing the finish line at the 2008 Royal Victoria Marathon, where we walked 21 kilometres. 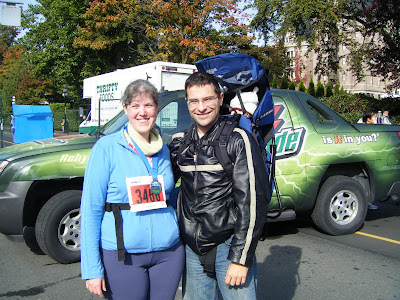 My support team and biggest fans.

Lisa and I finished the half-marathon in just under 4 hours (3:49:39 to be exact), which I was thrilled with as I felt anything under five hours was just golden. It was a great race, the opposite of the Rome Marathon in many, many important ways.

It was a beautiful day and the route was gorgeous: the fall foliage was so rich and the spectators were cheerful and many in number. There were hundreds of volunteers keeping us fed, hydrated, safe, and on course, not to mention motivated as they cheered us on. What I appreciated best of all was the organization of the event. Half-Marathoners started an hour earlier than Full Marathoners, and at a certain point the routes divided which meant the Half-Marathoners did a smallish loop while the Full Marathoners did a larger loop. Then the routes rejoined again later. This resulted in runners and walkers, fullers and halfers all being on the same course together for much of the race, which in turn made those of us walking feel like we were actually part of an event, not just stragglers stumbling in hours after the race was over. We watched the top ten marathoners race by us during our last hour of walking, aware that we were witnessing the race's winners: how often do you get to say that?

The finish line was fantastic, with hundreds of people cheering and shouting as we jogged down the final stretch. Volunteers took good care of us from then on, removing our timing chips, giving us medals, and directing us towards a giant food tent with fruit, carbs, and drinks. The only blip in my day was that Chris and the others didn't make it downtown in time to watch me cross the finish line. Still, it was an incredible day and I would definitely do this race again. I'm pondering alternating between Thanksgiving-with-my-family, Thanksgiving-with-Chris's-family, and doing-the-half-marathon. Which would mean racing every three years. Sounds about right!
Posted by adequatemom at 8:22 PM

Email ThisBlogThis!Share to TwitterShare to FacebookShare to Pinterest
Labels: life beyond Gwen

It was a fantastic weekend and totally wonderful to be able to congratulate and pamper you when you came back to the house! (Or help to coordinate the men-folk to do so ;) )

Would be honoured to repeat the experience whenever you like. We had a wonderful Thanksgiving sharing it with your family as well as D. and the boys.

Thank you so much for coming down and spending the time with us!

Good for you! Way to go, that's something to be proud of. I'm glad Victoria trotted out a lovely day for the event.

All the best,
Rachael

Congrats! Under 4 hours is amazing! Go you!

I'm glad it was a beautiful day, too. Perfect!