Once upon a time, there was a family whose last name was English. This family had a mom, a dad, and two little girls. The mom was very sick and the dad was not very nice. When the two little girls had grown up and had families of their own, the mom saw that they didn't like being around the dad, and didn't really have any kind of relationship with him. This made the mom sad. So, she made the two now-grown-up girls promise that no matter what, they would always get together as a family around Christmas time. Not long after, the mom died.

One of those two little girls was my mom, and was a long time before she and her sister started keeping their promise. The English Family Christmas is the result of that promise, and it is now in its sixth year.

It's an odd little tradition that we have, I suppose. We usually get together on the first or second weekend in December - those two now-grown-up girls, their husbands and children and grandchildren. We all take turns hosting. Two years ago, I was the hostess - I put on my first large family dinner while five months pregnant with Gwen. This year, it's my sister's turn. 18 people - 12 adults, 6 children - are descending on her home this weekend. Oh, and one baby-to-be (not mine, just to squelch any rumours!).

The English Family Christmas is a fantastic example of what's important to me around Christmas. We get together with our family, share a meal, catch up a bit, enjoy the madness of the six kids running around like idiots. Some years we have sung Christmas carols. The fact that we all travel every year to be together and share that time makes me really happy.

Bringing me to my next topic - relational giving. I've been working hard to wrap my head around relational giving this Christmas, as mentioned in this post. It really is a mindset, and I find that the traditions that already exist in our family, along with the fact that we don't live too spread apart, are somewhat supportive of the relational giving concept - but also make it hard to change the patterns that are already in place. Let me try to explain.

If you have a friend or relative who lives really far away, instead of shipping them a gift this Christmas, you might send them a letter telling them you're coming for a visit this year. See? Because spending time together is so much more valuable than a stupid sweater.

However, if you have a friend or relative who lives semi-nearby, and you already see them a couple of times a year, and you intend to continue seeing them twice a year, and they also expect you to give them a Christmas present, well .... then what?

I have also found that when trying to come up with relational gifts for people - and I've been working on my list since September - there are two categories of people who are really hard to figure out. Those with whom you really have no relationship, the people you buy for only out of obligation, are the first category. The second category is those people with whom you have a very healthy and happy relationship. For example, it was nearly impossible for me to figure out what to give my long-distance best friend - I already make the time to chat with him online at least once a week; we are in email contact nearly every day; and we spend a weekend together a couple of times a year. Relationally, there's not much I could do to top that up.

However, the in-between people - those with whom you have a pretty good relationship, that perhaps could use a little nourishment - those are the people it is fun to think of relational gifts for! The gifts I am most excited about giving, this year, are for my nephews, and since I don't think they read my blog, I'll share them here with you.

Since my nephews live far-away-ish, I only get to see them a few times a year, usually at large family gatherings such as the one this weekend. But I'd really like to spend some one-on-one time with each of them, doing something special that they will enjoy. I discussed it with my sister, and we decided that sometime in the Spring, she will bring the boys to the Lower Mainland and I will meet them there with Gwen. On one day, I will take Andrew (who will be 7) to Science World; on another day, I will take Scotty (3) to Crash Crawly's. On both days, lucky Auntie Sara will hang out with Gwen! Relationship-building in every possible direction.

There are lots of reasons to give relationally. It saves money; it's environmentally responsible; it's less likely to clutter up someone's house, and more likely to be appreciated; and of course it builds relationships, which is what Christmas is supposed to be all about, right? That being said, there's no reason the relationship-building has to happen during the magical Twelve Days: as mentioned above, the Nephew Trip is happening in the spring (they are getting decorated, illustrated certificates that show what their gifts are, so they do have something to "open" and then look at while they anticipate the coming adventure).

It just occured to me today that this is actually Gwen's first English Family Christmas - since we were snowed in last year and didn't get to travel. I'm sure she's going to have such a great time running around and being crazy with all her cousins, big and small. And you know what else? I bet she doesn't really care too much about the presents. It's only us adults who get all wound up about that stuff. Gwen would just be happy if you put on some music and let her jump on the bed, please. Maybe play a little ball, or read a book together. She's a girl of simple tastes. She wouldn't say no to a banana. Mostly she just wants to hang out with you and do what you're doing, really. 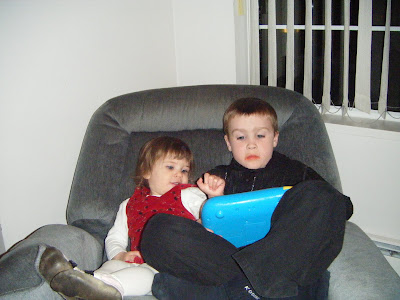 Hope you all have a wonderful weekend! If you have fantastic ideas about relational giving, share in the comments!
Posted by adequatemom at 1:48 PM

I inclination not acquiesce in on it. I regard as polite post. Expressly the title-deed attracted me to review the intact story.

Good fill someone in on and this enter helped me alot in my college assignement. Thank you seeking your information.

Brim over I assent to but I contemplate the list inform should have more info then it has.