Many months ago, I became a consignor at a children's consignment store here in Nanaimo. I figured it was a good solution for Gwen's outgrown stuff: I could drop it off at the store, they could either sell it or donate it to a women's safe house, and I'd get a bit of money out of it without doing a lot of work.
The first time I went there post-drop-off, I learned I had a credit of $12. I spent this credit buying a snazzy new onesie for baby Ira. This made me happy.
That was the first, last, and only time this consigning thing worked out.
The next time I went to the store, it was some months later. I arrived at 9:52 and the store wasn't set to open until 10am. I sat in the parking lot and waited. At 10:05 I hadn't seen any signs of life. I went and tried the door, which was locked. I used my cell to call the store. No answer. Unimpressed, and well aware of my Gramma Time minutes ticking away, I went on with the other business of my day. An hour or so later, having finished everything else on my list, I drove back to that particular end of town for a second try. Hooray! They were now open.
I hauled my big bag o' outgrown items into the store and set it near the desk. The clerk, a teenage girl, informed me that "ACTUALLY? We only take items on Tuesdays and Thursdays." I blinked. How was I supposed to know that? There was no sign on the door, I had received no phone call. And ACTUALLY? I'd already made two trips to her store, I wasn't about to make a third. "Do you want the stuff or not?" I asked. She continued to treat me rudely for a few more minutes, and I was ready to leave, but she finally decided she would deign to put a label on my bag.
Over the holidays, I sorted out a lot more of Gwen's stuff, and passed much of it on to friends of friends who are having babies this year. But there was still more, and I put together another bag of stuff for the consignment store. Today being Gramma Time, I once again headed downtown to drop it off.
I arrived at the store to find the windows papered over and this sign on the door:
SORRY [OUR STORE] IS NOW CLOSED
CONSIGNORS HAVE UNTIL JANUARY 7TH
TO CLAIM ITEMS
In a different time, I would have screamed and raged and written letters and demanded my money. I have dropped off probably $200 worth of stuff and all I ever got for it was $12 and a ridiculous dose of attitude. That's ... kind of like stealing, isn't it?
But there's no point in getting all het up about it. The people who ran the store, based on above evidence, are not only unhelpful and ignorant but also ineffective (how smart do you have to be to make the only children's consignment store in town a success?) and yelling at people like that is pointless. So I will wave goodbye to all my money and tell myself that they probably donated all the stuff to the safe house before collapsing. Then at least I can feel like I gave to a good cause, instead of feeling like I was ripped off.
The day was not over, however. I still had a bag of stuff in my car, and there was more to my mission: I was searching for a particular item for Gwen. I wanted to buy at the consignment store if possible because (a) it would be cheaper, especially if I had a credit; and (b) it's better for the environment to buy re-used goods if you can. As previously mentioned, there is no other children's consignment store in Nanaimo, but I knew there was one in Ladysmith - 25 minutes away. So off to Ladysmith I went.
I arrived and set up a consignor's account. If I'd thought more clearly about how badly my experience with consignment has been thus far, I may not have bothered. But at the same time, I still don't feel like selling the stuff myself, and if it ends up being donated to a local charity with no $$ in my pocket then no harm done, right? Then I set about exploring the store. I was looking for one thing in particular.
Gwen got a LOT of toys for Christmas. She wasn't really too short on toys to begin with, actually. I took a picture of her toy box on December 24th, knowing it was the last time all her toys would fit inside. 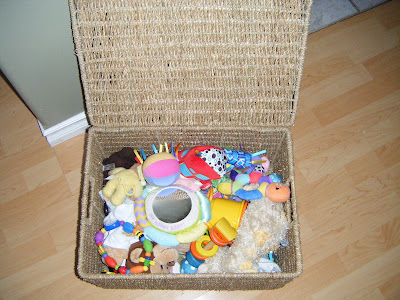 And here is what her play area looks like now. 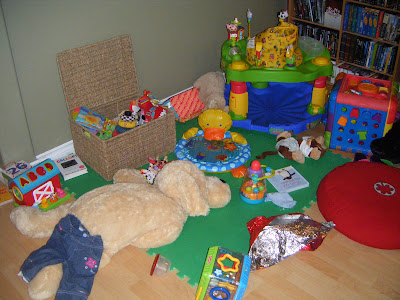 This isn't working well for any of us. The mess drives me crazy, and I think having so many toys scattered around just overwhelms Gwen anyway. I wanted to get something like this for her, so we could take out 1-2 bins' worth of toys per day, then put them away and use different toys the next day, so she's always got something new to explore.
Well, the consignment store didn't have anything like that. But what they did have was the Vintage Fisher Price Record Player. My parents still have the one from when I was a kid, and it still works, because toys were built like that back then. The record player works exactly like a music box: the 'records' have pokey bits on them that pluck the tines of the music mechanism in the 'needle'. It doesn't take batteries, but it takes ingenuity: to get to work, a child needs to place the record properly, wind it up but not too much!, place the needle, and then turn the switch on. My nephew Andrew has mastered these skills and the sequencing, and he really enjoys playing with the record player when he's at Granny & Grandpa's. The adults get a kick out of the fact that it's the only record player kids his age will ever see. And tweens are confused because they can't figure out how to plug their iPods into it, or where the CDs are supposed to go.
Anyway. I love this thing. I think it is kitschy and cool and brilliant and I was so surprised to see it tucked away on an upper shelf in the consignment store that I had to grab it. Had to. Did. $14.99.
I continued prowling around, ostensibly looking for windup toys. My next treasure was the Tupperware Shape Sorter Toy. I had wanted to buy one of these for Gwen for Christmas, but balked when I learned they sold for $39. This one, however, was $11.99. Sold!
Just as I was leaving, a cute little stuffed dog caught my eye. It looked vaguely educational and quite interesting. It was also priced at $3.99. Sold! It turned out to be the Fisher Price Laugh and Learn Puppy, and Gwen LOVES IT. She was completely entranced with it nearly all afternoon. For a talking toy, I quite like it, too. The different body parts all have a few different songs and rhymes when pressed, so you're not hearing the same five sound bytes five hundred times in a row. The songs are quite good, too. Awesome buy for four measly bucks!
The terrific irony, of course, is that I went shopping to address the fact that Gwen has too many toys, and instead of a storage solution I came home with three more toys. Explaining that to Chris was fun. But seriously, how could I pass up these deals?!
Obviously, I need to stay away from shopping altogether.
Posted by adequatemom at 2:26 PM

I need that record player! Love it!

I know what you mean about the toys, it's insane. INSANE. But they do so love them... spoiled little rottens. My weakness is art supplies. I have two full totes of crafts for the kids in the garage and Claire isn't past the "eat everything first" stage... I need help :).

Probably not too helpful as there's not one in your area, but IKEA has those bins. They might ship it to you?

Superstore has those bins too and the are much cheaper.

I LOVE consignment stores and if you are ever in Courtenay, not only should you stop in for tea with me but you should also check out a thriving consignment store called Little Me which not only carries used items, but also new non toxic and natural wooden toys. I could spend hours in there and I just love a good bargain!

Check London Drugs too...we have bins similar to that (with giraffes on either end) and they came from LD.