As usual, it’s been a full and busy month. A few weeks ago, you participated in your first cosplay contest, dressing up as Rey from Star Wars: The Force Awakens. Your dad worked incredibly hard on your costume, though sad to say you were less grateful than you should have been for his efforts. Nevertheless, you were patient and devoted enough to do a LOT of waiting around on the day of the contest, and the efforts paid off as you took second place in your age category. Impressive … most impressive! 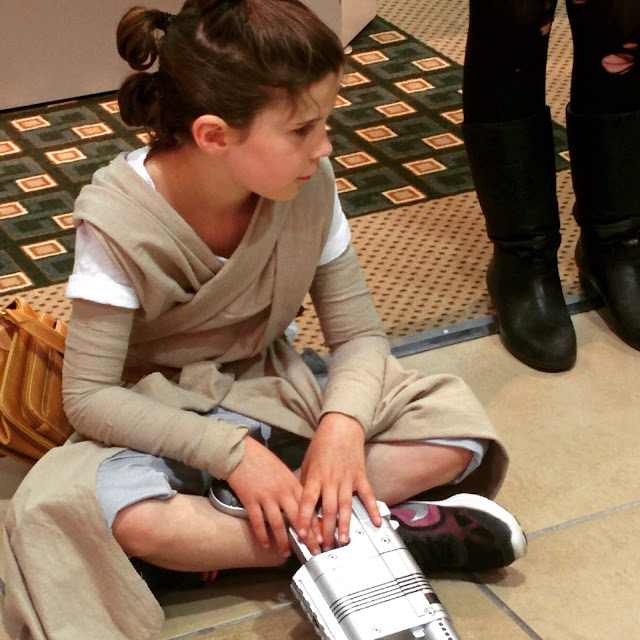 The Star Wars obsession continues with your piano practice. In late April, you taught yourself how to play the first part of the Star Wars main theme, and your piano teacher supported you by writing out the music for the next section (in the same key you’d already chosen) and encouraging you to play the piece in your upcoming recital. At any time of day, we just might hear the Star Wars theme grandly echoing through our house as you practice and prepare. 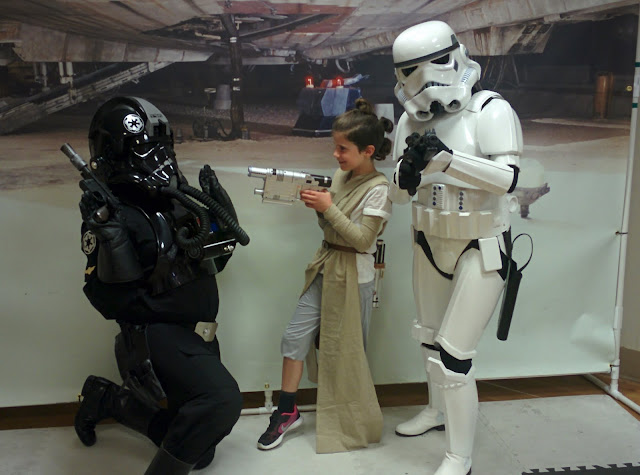 A little bit late this year, but we did get our usual annual family photo shoot done, this time at the decorative gardens of VIU. I love the bright colours of the photos, and I am awed again by how grown-up you’re getting. This was especially obvious when I took last year’s photos out of the frames and put them in our photo album next to your six-year-old pictures … what an enormous change in the past two years! 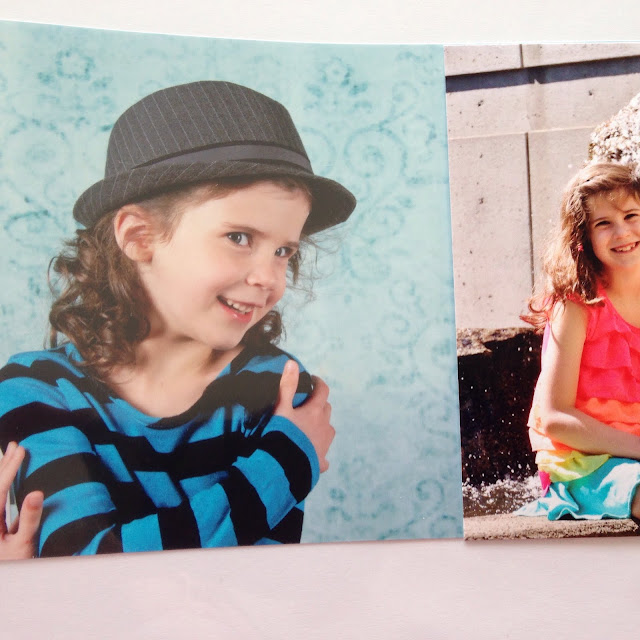 Late April saw us attending your school in the evening for the Spring Concert. We were looking forward to your performance, of course, but didn’t have high hopes for an evening of stellar entertainment. Boy, were we wrong! Your amazing music teacher, Mr. Derksen – the same man who played “Space Oddity” for your class on the day of David Bowie’s death – had arranged a full program of classic rock songs, all with LIVE ACCOMPANIMENT. Not only that, but these songs were not presented in the usual “group of kids stand in three rows and sing” format – no, these songs were PERFORMED. From the young man who played an enthusiastic air guitar to “Johnny B. Goode” to the class, who performed highly amusing and entertaining interpretive actions to the Beatles’ “Help”, every group’s song featured fun and enjoyable performances. I can’t miss writing about the class who performed “Space Oddity” itself, with a cardboard rocket ship that “blasted off” thanks to a pulley system, while several students cavorted around with bright yellow stars. Your class performed “Three Little Birds”, a reggae song – and I put aside my hatred of reggae for one night to enjoy and applaud you all. Mr. Derksen had noticed your efforts in learning and performing the actions, and put you on Stage Left at the edge of the class to encourage everyone else to follow along. You also started doing an echo, of your own volition, which Mr. D. liked and told you to keep up. On the night of the concert, another girl started echoing along with you, which did NOT amuse you! 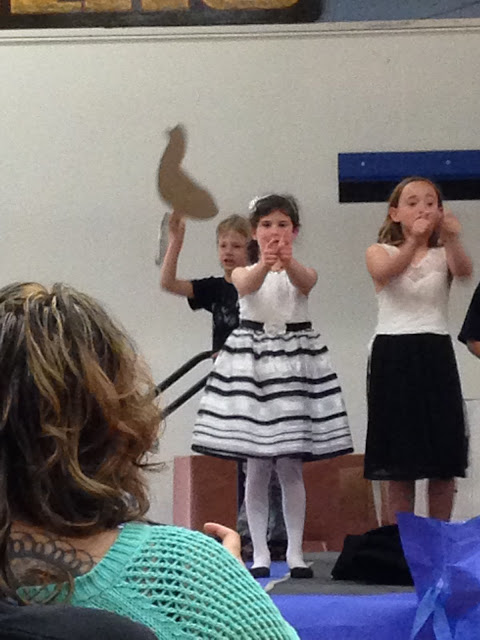 I happened to mention at the dinner table one night that I had bought tickets to attend “Musical of Musicals: The Musical” in Ladysmith with a friend the following week. Thoughtfully, you told me, “That sounds like a really good title. And I like musicals. Can I come?” Well, who could say no to that? After double-checking with some of the cast and crew members that I knew that the content was suitable (ish) for kids, I bought another ticket, and off we went for a night of musical fun. The musical (of musicals, the musical) is a pretty funny show. Presented in five scenes, each scene is written as a parody of (and homage to) a different composer or team: Rodgers and Hammerstein, Andrew Lloyd Webber, Stephen Sondheim, Jerry Herman, and Kander and Ebb. The show is packed with in-jokes and references to the shows written by these composers, so a knowledge of these musicals definitely adds to the fun – and I’m happy to say that you were familiar enough with various musicals to be able to catch a lot of the jokes. You had brought along a notebook to write down questions in case you were confused, but I don’t think you wrote down any questions – just “Corn – silly guy!” about the opening scene (an accurate observation) and then settled in to enjoy the show. The final scene, set in a “Cabaret” in “Chicago” featured the usual scantily-clad girls, one of whom is advised to sell her body in order to pay the rent – which led to a conversation a few days later when you asked me, “How can someone sell their body? That’s just made up, right Mom?” After the show was over, some of the cast and crew (friends of mine) came over to say hello, and Nikita, the stage manager, gave you a tour of the booth and the backstage. You soon came onto the stage proper, happily cavorting around and leading my theatre friends to comment (as if I didn’t already know) that I had very effectively passed on the gene for performance to you. 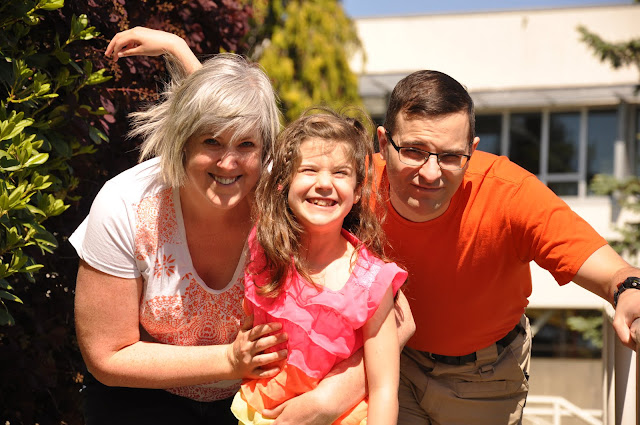 Speaking of which – I’m in the process of signing you up for your first ever musical theatre class with Headliners Studio! Hopefully, instead of gymnastics, this fall you will be going to rehearsals every week, learning and practicing and then, before Christmas, performing a full-length musical with your troupe at a local theatre. After sending in your registration form, you were full of questions. “Which part will I get to play? Will there be two acts? Will I be in both acts? What if I just have to do props, like Mom, and not get to talk and sing?” Of course, most of these questions can’t be answered until your director makes these decisions, but you did ask one question I absolutely knew the answer to: “Mom, will you come and see the play?” “OF COURSE I WILL! I will be right there in the front row, cheering and hooting.” To which you primly said, “Mom, that’s not being a good audience. There’s no cheering at a play.” We agreed that it was okay for me to cheer at intermission and at the end of the play. Whew. 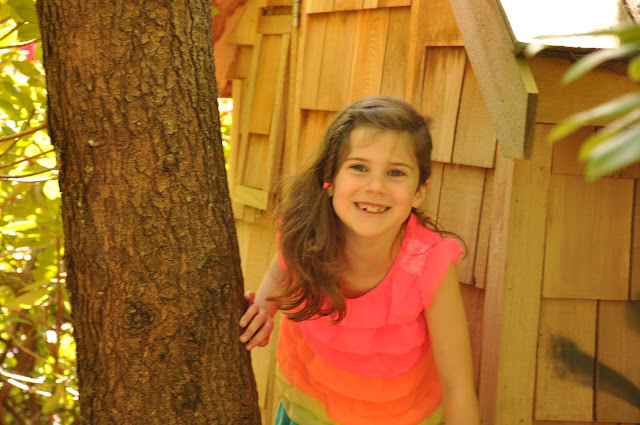 You told me a charming story on the weekend about an experience you had at school last week. A substitute teacher was filling in, and didn’t know everyone’s names quite yet, so somehow made the error of putting you on the boys’ team when she divided people up for a game. You were thrilled, and proved to be the secret weapon, as the game involved each team making up trivia questions for the other. The girls’ team would ask things like, “What colour are Princess Elsa’s eyes?” and who on the boys’ team would know the answer? Well, you, of course. Then you would help the boys’ team come up with questions like, “Who is C-3PO’s friend?” to which no-one on the girls’ team had any response. “I liked being on the boys’ team, Mom, because I’m kind of a boyish girl.” “Well, maybe you’re just a kid who knows that you can like all kinds of different things, instead of a kid who thinks that some things are for boys and some things are for girls.” “Hmm. Yeah. That’s what I am.” 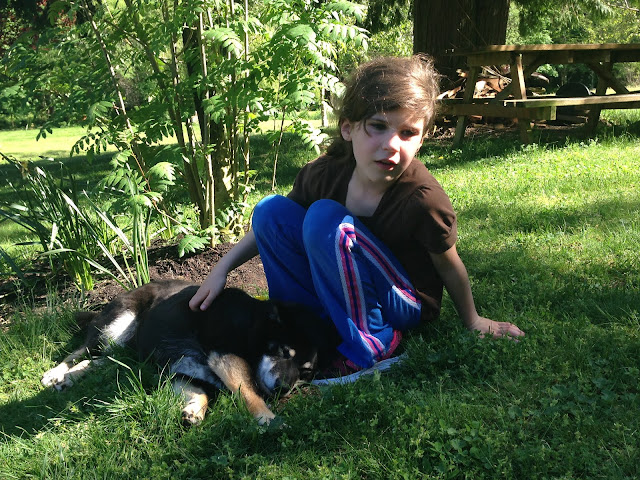 You’ve been invited to a friend’s birthday party next weekend, and for once in our lives we actually had time for you to sit down and make a card for her. You’d think with all the craft supplies I have on hand, this would happen more often, but somehow we are always too rushed. Anyway, the card you made was quite amazing. You put a LOT of work into it – I think it must have been about a half an hour, all told. I have to admit, too, that I really enjoyed helping you out with a technique or two to bring your idea to life. Your new and improved attention span is REALLY cool! Later that same night, I had a group of women over for a cardmaking class, and I showed them all your card – they all agreed that it was a wonderful card. When I reported this to you the next day, you humbly offered to teach them all how to make it. What a generous soul you have! 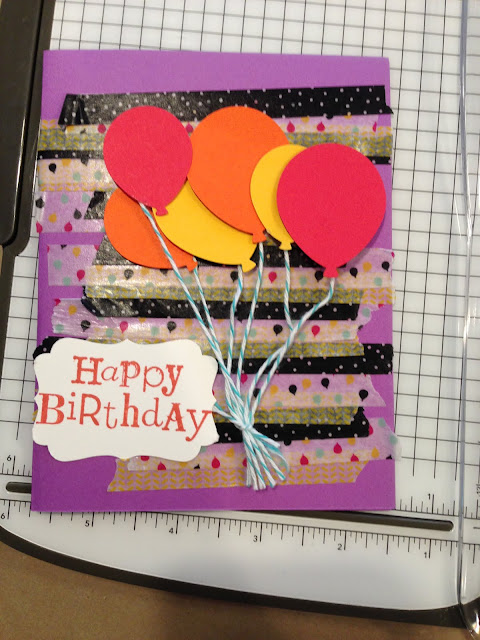 You were marvellously generous with me this month for Mother's Day, too. This is the first year that you spent your own money on a gift for me, but more than that - you figured out what you wanted to get, made sure you had enough money, and asked me to take you to the store to get it on a day we were already heading out together. In short, YOU HAD A PLAN and an appropriate way to enact the plan. I was blown away by your forethought! After your piano lesson, we went to the grocery store, where you first told me I had to wait in the car, but after considering the busy parking lot, decided it would be okay if we walked in together and then I waited for you at the front of the store. You chose the gift, brought it to the checkout, paid for it, and then walked back to me, gallantly trying to hide it behind your back. When we arrived home, you decided four days was too long to wait to give it to me, and presented me with my early Mother's Day gift - beautiful tulips and a handmade card reading, "My BFF for meny happy yers! Happy Mothrs Day!" It was the sweetest gift ever! 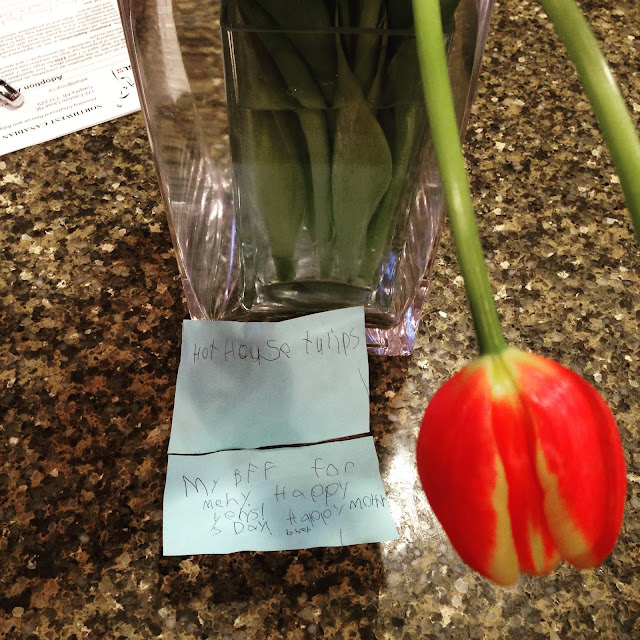 Well, I think that’s all the news for this month, Gwen. As always, I love you a million, billion, kajillion and EIGHT.

Your BFF,
Mom
Posted by adequatemom at 11:36 AM