It's been a shamefully long time since I updated, so please bear with me while I blather on about a great many things.

1. I graduated! I have now officially finished my degree, after nearly ten years of distance education, and can merrily call myself a BA (English). This has had little effect on my day to day life as I still work full-time at my boring and often very menial day job. However, I am trying to launch a freelance editing business on the side, and have had a couple customers so far. I really enjoy editing, working through written material to correct not only the mechanical stuff (grammar, punctuation, spelling, word usage) but the more esoteric task of ensuring the words flow as smoothly as possible and the meaning comes across crystal clear to the intended audience. Yes - I am a word geek. And I love it. 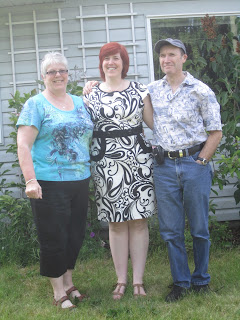 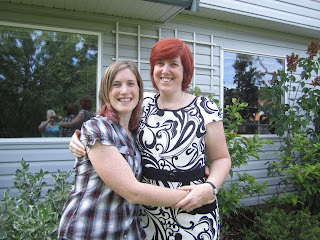 2. I celebrated! Since I didn't actually drive to Athabasca (2 hours outside of Edmonton, Alberta) to attend convocation, I wanted to do some other stuff to mark the occasion of graduation. My friends helped me throw the most amazing grad party, with costumes and charades and great amounts of silliness and fun. I asked everyone to dress up as a favourite literary character, which was actually supposed to be really easy, but turned out to be more difficult than anticipated. I was absolutely tickled to see what kinds of fantastic costumes my friends came up with, and it was so much fun to try and guess what characters they were - it really got everyone mingling. For added fun, my parents and sister attended the party as well. I was a little worried about how that might work (would my parents think my friends were hooligans? would my friends think my parents were squares?) but it went awesomely, with both groups gushing to me the next day about how much fun the other group was. 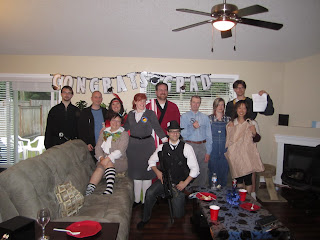 3. The Big Moment! Prior to the party, I told my friends that I wanted a Moment, a moment when I went from being plain old Laura to being Laura, B.A. I didn't know exactly how to create this, but Tami and Arwen were all over it. Tami had already advised me months ago that when my degree arrived in the mail, I shouldn't open it, but should save it for the party - which I did. Arwen took it about seven steps further, because that is what she is good at. We picked out a graduation cap from the party store, a really cool one that everyone could sign, and she had me put it on at the party and walk across the room after she made a really nice speech about me. (I had to be reminded to move my tassel from one side to the other!) Then everyone counted down from 10 to 1 - like on New Year's Eve - and I opened my degree. That was my official moment, and although it was a completely random time on an arbitrarily chosen date, it felt tremendously real to me. I am absolutely overjoyed that I got to share that moment with many friends and family, instead of being alone on a stage with a bunch of strangers. 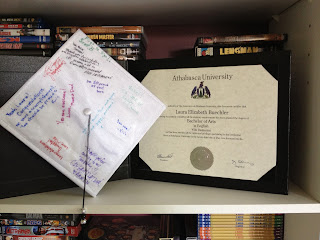 4. The Purchase! It turns out that when you graduate, people give you money! My parents, grandpa, in-laws, and a few other people gave me cash on the big day, and it turned out to be enough not only to defray the costs of the party, but to buy something I have wanted for a long time - a proper sofabed for friends and family to sleep on when they come to visit. I spotted it in Costco when I went shopping for the party food, and had to come back the next day with my parents and sister to get their opinion. I was texting Chris with pictures from my phone to get his approval, as well (since he was at work). Approval was gained and the next day my gracious in-laws met me at Costco with their truck to pick it up. I LOOOOOOOVE this new couch. Another thing that I have wanted for a long long time is a recliner, and while we don't have room for it in our current living room, this couch has an extended seat on one side that I have claimed forever as mine own, and it serves a similar purpose. The only person who has actually slept on the sofabed part, so far, is Gwen (when she wasn't feeling well a week or so ago), so consider this an invitation to my faraway friends and family - come visit and try it out! 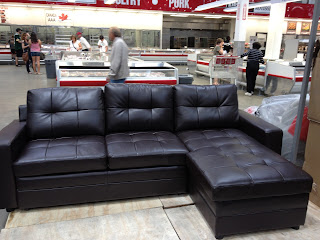 5. I auditioned! I promised myself that when I finished school, I would add singing back into my life - I haven't done any performance singing since before Gwen was born, and I really miss it. I've thought a lot about what kind of setting would be a good fit for me; I was immensely spoiled in my Powell River days by being a member of a very exclusive vocal jazz ensemble, and being in a 100-member, mediocre-standards choir just does not do it for me. I tried out two singing groups here on the Island prior to having Gwen, and they were both enjoyable, but not quite right, for different reasons. So I decided a good fit might be to audition for a musical. We are guaranteed to actually perform (lack of performances was an issue for me in one of the groups I tried), and the period of commitment is well-defined: audition, rehearsal, performance, done. If I don't like the songs or the people or the situation, well, it'll be over in a few months. As it happens, though, I am pretty optimistic about the play I auditioned for. It's Alice in Pantoland, the Christmas pantomime (British humour) put on by the Nanaimo Theatre Group. I have taken Gwen to these shows for the past two years and we have both LOVED them. And now I might get to be in one! The audition itself was a blast - it turned out that the musical director was the director for one of the vocal groups I've already been in, so he knows me and thinks well of me. He tried to convince the rest of the audition folks (no idea who they are or what their roles are, since they didn't introduce themselves) that I didn't really need to sing, because he already knew what I was capable of, but they still wanted to hear me and of course I didn't mind at all - that's what I came to do. I had prepared a song from Cabaret, but it turned out there was no accompanist, so I switched gears and used my go-to a capella song, "Smile". It's sweet and schmaltzy and slow and gives me lots of opportunity to play and show my range. After I finished, the musical director asked me if I could please try something really bizarre: "Sing the first part of that song again, but sing it REALLY ANGRY." Well, "Smile" is not the sort of song that you usually sing angry, so that was a new experience! I was really making it up as I went along, pacing across the stage and gesturing sarcastically with a bitter smile twisting my face. Everyone was laughing - it was really fun. I should hear back next week about the results!

6. Adventures with Gwen! I know or have heard of a few parents who made it a habit to not let their new baby interrupt their lives in any way, who let their infants snooze in their carseats while Mom and Dad played with their softball team, and so on. That was never my experience. Gwen was not the sort of baby who would have tolerated that, and to be honest I don't think I could have multi-tasked to that extent either. But now she is four, and I have a husband who works weekends, and I still want to have a life, and I've become the mom who brings her kid everywhere. I brought her to the above-mentioned audition, for example, making friends with a teenager in the waiting room so she would hang out with Gwen when I was called in. I brought her to a (grown-up) friend's birthday barbecue the same weekend. I brought her along to my fancy graduation lunch and she will also be attending a "YAY IT'S SUMMER" outing on a certain rooftop patio with two of my best girlfriends this weekend. She's my plus-one, and she is old enough to behave well (for a limited time at least), and I am experienced enough to bring along the props and distractions to make this work. (An iPhone with a goodly number of kids' apps is a lifesaver in this situation.) 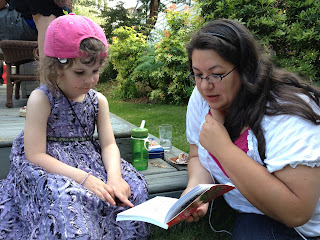 7. Adventures with Gwen, Part Two! Yes, we also go on lots of Gwen-centric outings. Summer means playdates on the beach or at water parks, and the excellent Free Outdoor Movies events are starting this month as well. We also took in a free kids' concert in the park, Shelley Bean and the Duckety Muds, which was terrifically entertaining! It was not a "sit still and listen" kind of concert, but one where the kids were openly invited to get up on stage, dance, do actions, and let their personalities shine out. Well, it will not surprise you to note that this is the kind of environment where Gwen thrives (pretty sure she will also be auditioning for the Christmas panto in a year or two). She spent pretty much the whole time dancing along on stage, and I have some great pictures and video to prove it. 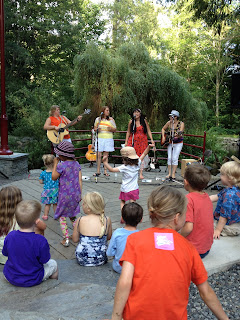 That's all I can think of for now.  Hope you all have a great weekend!﻿
Posted by adequatemom at 11:27 AM