I don't know why I do these things, have no idea why I am so likely to listen to the tiny voice in my head that says HEY! Forget free time, let's spend the six weeks after Christmas preparing a totally over-the-top craft project for NO REAL REASON. But I do. And I took photos. So here it is! My journey to Craft-Addicted Preschool Mom.

I set myself a couple of goals for this project: 1) I couldn't work on it at any time that could conceivably be spent doing schoolwork, and 2) I couldn't spend any additional money on the project because I spend enough money on craft supplies as it is. As a result of the first rule, it took me several weeks to do what could probably be done in a weekend. (And if you opted to spend your weekend doing this, Congratulations! You are just as crazy as me. Come over, we should hang out.)

First, I borrowed a plastic template from my friend Tami. I traced it onto pretty much every piece of 12x12" cardstock that I had in the appropriate colours. After cutting, scoring, folding, and gluing, I had 25 of these treat boxes. This took me 4-6 hours in total. 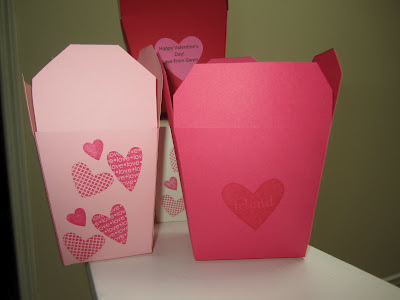 After the tracing and cutting and scoring, but before the folding and gluing, I decorated the boxes-to-be with stamps and punched hearts and stickers and so on. I printed several pages worth of "Happy Valentine's Day! Love from Gwen" and then punched these out so they were heart-shaped too. That took about 2 hours. 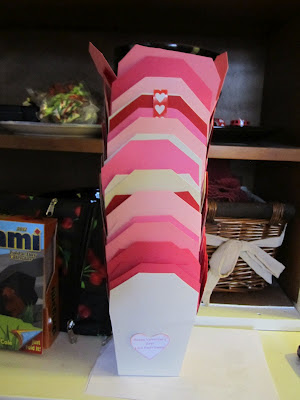 I had a LARGE stack of these boxes when Phase 2 started. Phase 2, of course, was CUPCAKES. 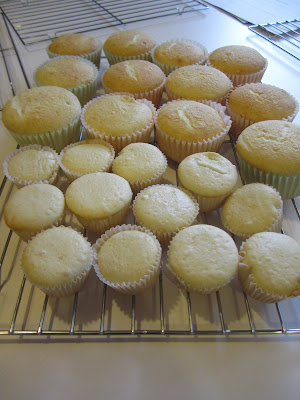 I baked a lot of cupcakes, because once you start baking cupcakes it's hard to stop. This was probably another 2 hours, plus 2 hours to cool after baking. I don't know how many cupcakes we ended up with; there were probably about 30 full-size ones and at least as many miniature ones, from 2 boxes of Duncan Hines cake mix (yes, a slight violation of rule #2, but they were ON SALE and also they do not count as craft supplies). 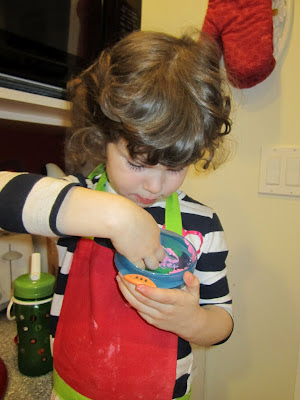 My cousin Mandie, whose hobbies include cake decorating, came over with her fancy cake stuff and helped us make BRIGHT PINK icing. I really wish I'd gotten a picture of Gwen's face when she added the colouring and saw the dramatic PINKNESS take effect. Highly recommend Wilton cake decorating gel for !!!extreme!!! colours. Here are Mandie and Gwen, putting the piping bag together so we can ice the cupcakes. 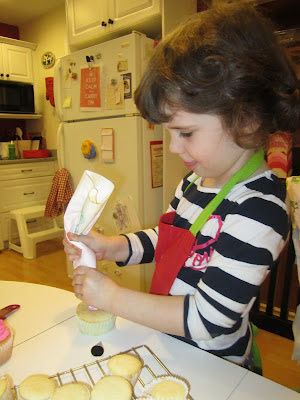 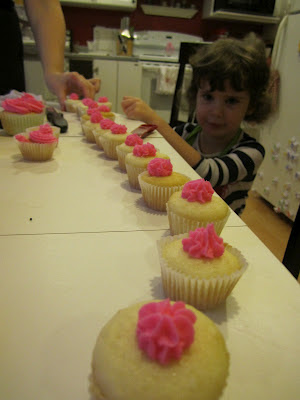 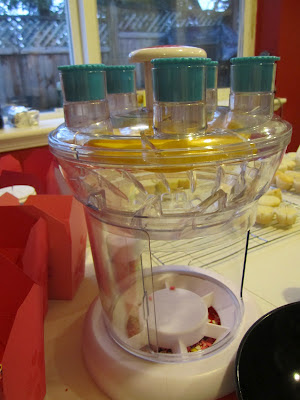 And then it was time for SPRINKLES. I had bought this contraption earlier in the year with the intention of giving it to Gwen for her birthday, but I decided it would be fun to break it in now with this project. This is called a Topping Tornado and it is sure to delight the 3-6 year old in your life. You put the sprinkles in the 5 little dispensers up top and place the cupcake in the center of the cylinder. Then you press a button to get the spinny thing spinning around and then RELEASE THE SPRINKLES and they fly all around and land an a delightful and random fashion on your cupcake. 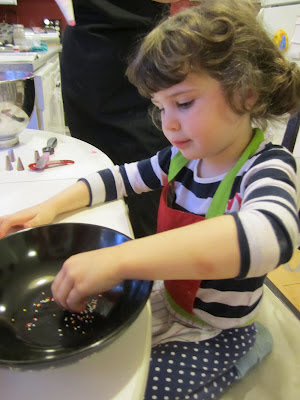 Given the volume of our project, it soon became obvious that the Topping Tornado's set-up and processing time was going to be a hindrance, so we probably decorated fewer than 6 cupcakes in this fashion, switching quickly to the "put cupcake in a bowl and pour sprinkles over it" method. Here, Gwen takes advantage of some leftover sprinkles. 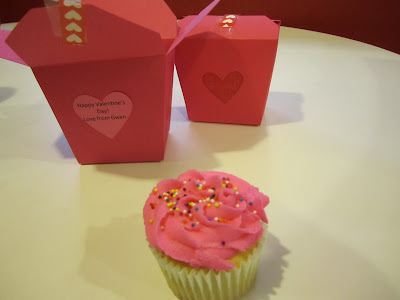 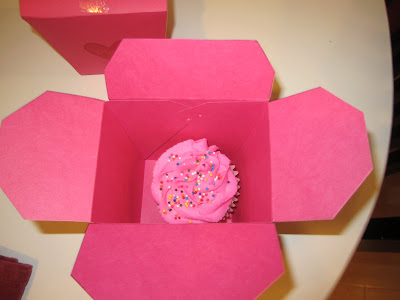 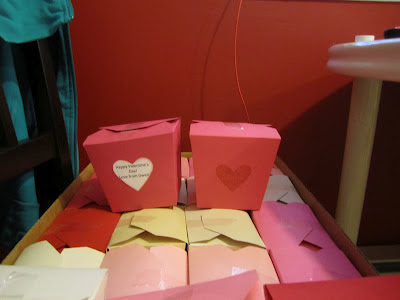 Posted by adequatemom at 7:37 AM