In Which I Attempt to Trade Web Know-How for Muffins

Here's a laugh.  I read in a parenting book the other day that kids Gwen's age should have a vocabulary of approximately 50 words.  In case you've forgotten, Gwen hit 100 words sometime between 12 and 18 months, and since then I've stopped counting - but I'd be shocked if I learned that it was less than 200.  However, I'm not going to count, so I'm not going to learn that, so there are no shocks in my future on that score, at least.

In the very next paragraph, the book states that children 30 months old should have a vocabulary of about 1000 words.  Yes, you read that right.  Between 24 and 30 months, a child's vocabulary expands to twenty times its size.  (This sounds like I am writing ad copy for Sea Monkeys or something.)  Let's say instead that their vocabulary "twentibles" itself.  (Get it?  Not doubles or triples, but twentibles.)

So, you may have noticed I changed my blog layout.  I did!  I have actually been intending to do this for, um, a couple of weeks now, but I have this attention span problem.  I don't like to get started on any task that might take more than 5 minutes if I have any fear that I may be interrupted before finishing.  And since I am the mother of a toddler, there are actually no times in my life that I may rest assured I will not be interrupted.  So I have an awfully hard time starting things.  However, last weekend Gwen went to her grandparents' house so Chris and I could go see The Rocky Horror Show (live!) in Victoria, and this meant that I had a couple of free hours to myself in my house, and I determinedly sat down with the Blogger Template Designer and got 'er done.

Another thing about my blog.  There are ads on it.  There have been for a while, and nobody has ever grouched at me about it (though feel free to do so now if you like).  In all the time I have had ads on the blog, I have earned a grand total of thirty-four American dollars.  And I can't even have it, because Google AdSense won't pay you any money until you earn one hundred American dollars.  You wouldn't even believe how many hoops I had to jump through to get this far.  Anyway, there are all kinds of things you can do to customize your ads and make them more relevant to your readers (and thus, not only more clickable, but less offensive!), and generally Be Successful At Monetizing Your Blog, but I cannot for the life of me make heads or tails of the info AdSense sends me.  (There is also, of course, the issue of being too intimidated to try and work on it if I fear I may be interrupted.)  If anybody out there is willing to help me figure this out, I will give you some of my American dollars when they finally arrive in real life.  Or some other prize/favour if that is what you would prefer.  I am very good at making delicious muffins.

One more thing about the ads, and then I'll get back to talking about my amazing daughter: when I changed the layout, I changed the colour scheme of the ads to "Match Template" which is supposed to make the ad's colours, well, match the colours of my blog.  (Hey Dad!  You can skip this paragraph!)  First of all, I think that's just freakin' cool that that is an option.  Secondly, I'm not totally sure if it's working, so if you see an ad that's all clashy and obnoxious, tell me and I'll try and fix it.

So yes, I have this daughter.  I had this post in the works where I described in intricate detail how awful her tantrums were, but really I can summarize it thusly: Gwen's desire to be independent does not make her happy.  It makes her ENRAGED and sometimes ANGUISHED.  By the time you realize that whatever you just did or said threatened her independence, DRAMA HAS ENSUED and you will now have to spend the next 3-10 minutes calming her down.  Once you calm her down, you will have to encourage her to ask for what she wants in a "big girl voice" so as not to teach her that tantrums work.  This may take two seconds, or two minutes, or may cause another tantrum.  You never know!  Unpredictability is part of the fun!

I think we are getting better, as a family, at handling the tantrums.  I have to work on remembering that my job as Mama is not to just make Gwen happy all the time.  The urge to just solve her problems (aka give in to the weeping toddler) is very strong, but serves no one.  I am already better at withstanding the whining.  But let me just say, in case there is anyone out there who hasn't heard: Man, parenting is hard.  I think that will become a refrain around here in the next year.

Anyway, I will close with three pieces of awesomeness. Awesomeness the First: the longest sentence I've heard Gwen use, which she said yesterday: "Monkey have a drink too." Awesomeness the Second: this picture. 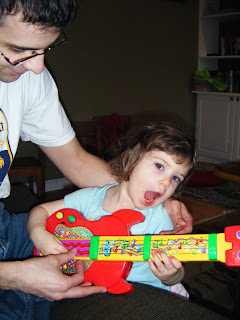 (We told her to make a rock star face.)
And Awesomeness the Third: genuine conversations with my daughter.
Me: Gwen, did you have a good time with Gramma and Grandpa?
Gwen: And Fritz!
Me: Yes, Fritz too!  Did you play with them?
Gwen: Playground!
Me: You went to the playground!  How fun!
Gwen: Slide!  Swings!  Grandpa!
Me: Wow, you went on the slide and the swings!  That's so great!

Gwen: Oooh, a plane!
Me: A plane?  Where?
Gwen: Right there!  It's fast!
Chris: It sure is - planes go very fast!
Me: Gwen, do you remember when we went on a plane?
Gwen: Auntie! Andrew! Scotty!
Me: That's right, we went on a plane to visit Auntie Sara, and Andrew, and Scotty.  And Uncle Dave too!  Can you say Uncle Dave?
Gwen: Uncle ... Mikey!
Me: That's pretty close!  (Forgive her, Uncle Dave, she's seen her Uncle Mikey a lot more recently!)
Posted by adequatemom at 9:37 PM

Okay, I would say that parenting a girl is harder than a boy. I know, I'm surprised too. Maybe we just haven't come to the spaz faze, but Reilley's frustration mostly comes from getting his tricycle stuck in the hall way, or the cord wrapped around the wheel of his pull-phone. He gives a horrible shrieking wail and I just have to say "stop, slow down, take a deep breath, and stop pulling. Now, can I help you?" He usually says "Yeah", and I help him and remind him he just has to ask for help, I don't understand shrieks! It's really been starting to work. He's actually been asking for help. He starts with a bit of a shriek, but then I think he remembers and asks for help. Kids are so amazing!!

And that's funny about the ads. I CAN imagine the hoops because I clicked on that button to read about it when I was setting up my blog, but I quickly ran away screaming. TOO scary.

I would just like to say that while I was reading this there was a large purple and black ad for spray lube on my screen.

We have hit the tantrums too. Good lord, the tantrums! They seem to be worst when Megan is tired, hungry, cranky, or if there is a full or half moon, or if it's Tuesday.

Um, hope you find that as useful as I did.

And I didn't even notice your ads, but I love the new layout!

Uncle Dave is full of forgiveness!

Love the new look! The sea monkey reference had me cracking up...

I am loving the actual real conversations and the ways that they are now remembering things. It's awesome! I just have to share this because it was so adorable - yesterday, when I got home from a meeting, Ben said "Mommy - home now!"

Can Gwen say "uncle" very well? Ben has an Uncle Matt and calls him "unh matt."

Lindsey, Gwen is actually pretty good with "Uncle" but she has been saying "monkey" for a very long time so she learned the "nk" sound from that word, I think. She is NOT good at saying the word "playground", even I have to ask her to repeat it a few times and it's not even consistent from one day to the next.