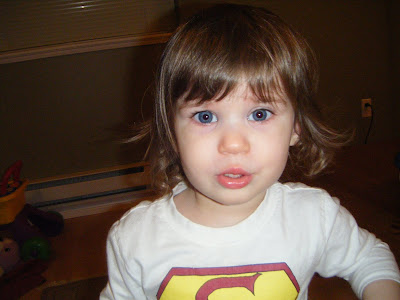 I have started telling people that you are “almost two” when they ask your age, and perhaps two years old will mark the turning point when I no longer announce your age in months to perfect strangers but instead round to a quarter-year or so. Don’t think I’m going to stop with the newsletters, though. 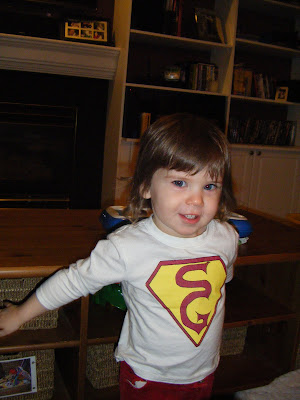 This very morning, after I got you dressed and told you it was time to go downstairs for breakfast, you celebrated your almost-two-ness by using a new word and a new concept. You walked to the stairs, then announced “self”. You got upset when I followed you and I soon understood that this meant you wanted me nowhere near you as you went down the stairs BY YOURSELF. I was at once very proud of you, a little bit nervous about your safety, and a whole lot stomach-sinky as I realized the phase we are embarking upon. If left to do it yourself, it can take you upwards of ten minutes to ascend or descend the stairs, and we don’t always have that kind of time. I foresee some disciplinary issues in our future! But, you know, I’m still mostly proud. 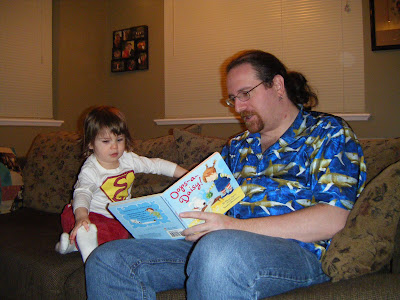 It’s been a busy month for all of us. You are now sleeping in a big girl bed instead of a crib, and on the whole we are quite impressed with how easy that transition was for you. I guess most of the problems that relate to these transitions have to do with toddlers actually opening the door and coming out of their room, and parents having to repeatedly put them back to bed. We are really grateful that you don’t know how to open doors yet, but just in case, we’ve put a doorknob cover on the inside of your room, so you’re not going anywhere. In addition, you haven’t really shown any interest in leaving the room: the couple of times you refused to nap, you were entirely happy to just play in your room instead. We’ve take the diaper pail out and childproofed the dresser drawers, so you’re safe to be in there by yourself, even if you do make a heck of a mess by taking out every single toy and book and throwing them on the floor. 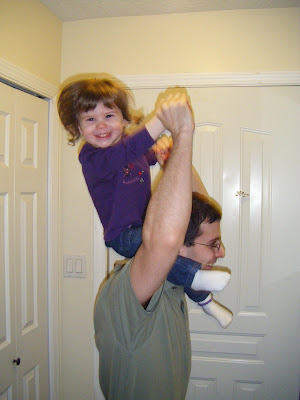 We’ve started encouraging you to help us with chores and clean up. After a meal, I ask you to bring your plate and fork into the kitchen and put them in the dishwasher (with help). Sometimes you do it, sometimes you don’t, but hopefully you’re getting the idea. You also like to help me sweep under your chair with the dustpan and brush. When we are cooking or preparing meals, you LOVE to use your step-stool to get up to the counter-level and “help”. You also love to help with laundry, which in your terms means that I pass you the items of clothing and you put them in the washer (or the dryer, or the basket). I talk to you about colours while we do this, but you don’t seem to be getting the concept yet. 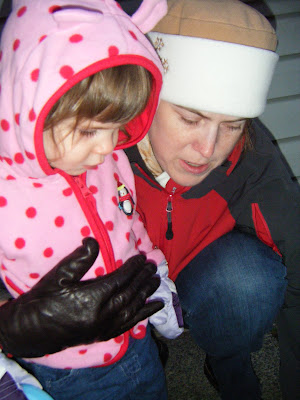 Watching your language develop is my favourite part of being your mom. It’s amazing to watch you blossom, day by day: learning bit by bit to communicate about what’s going on around you and inside you. You pick up words and concepts so quickly now, and you are putting more and more words together. A common structure might be for you to notice my necklace and say, “pretty. Necklace. Mama. Mama pretty necklace.” You even know your name now, and more than once have said to me, “Hi! I Gwen.” Then you point at me and say, “Mama!” It’s obvious that you are as excited as I am about your growing communication skills. 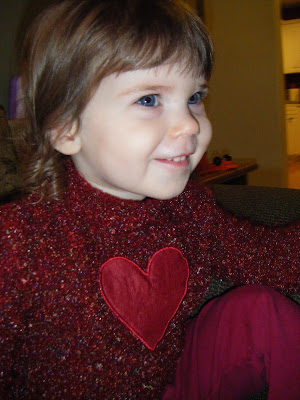 You are really enjoying our Mother Goose class and love to sing along and do the actions to the various songs. Your favourites at the moment are “Bananas Unite”, “Roly Poly”, “Twinkle Twinkle”, and the alphabet song. You are the darling of the Mother Goose class because you like to stand in the centre of the circle and applaud for everyone’s singing! I’m sure you think that all those people come to see YOU.
This is not exactly something that I’m proud of, but it wouldn’t be honest not to include it in your newsletter. You have joined the ranks of millions of other children (and adults) and developed a deep affinity (if not addiction) to screen time. Yes, you now watch TV and are also a big fan of Youtube. We don’t have cable, so the TV isn’t on constantly – in fact, we only let you watch your show on weekends. Your dad downloaded two seasons of Blue’s Clues from the Internet and burned it to DVD. There are a lot of crappy, inane kids’ shows, but Blue’s Clues is actually pretty good – well-written, interesting to watch, lots of variety within a comforting structure. So we’re happy to let you watch a few episodes on the weekend. Your dad also lets you watch a bit of Youtube on his lap: mostly clips of the Muppets or Sesame Street, especially old-school stuff that he and I watched as kids. 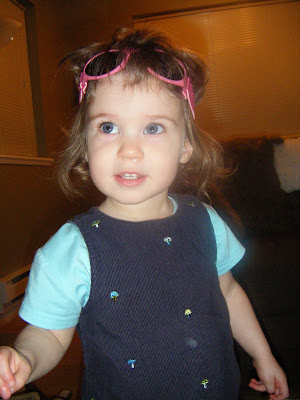 There is obviously more screen time going on at places other than our house, though, because there are certain phrases creeping into your vocabulary that you did not learn from us or even from your pal Steve. When you want to greet people, you often say “Ola!” And yesterday, I heard you say, “Ariba, ariba!”. This is actually kind of embarrassing for me, especially the “Ola” thing, because I feel like other adults might be judging me as the type of person who lets their kid watch Dora every day for hours at a time. On the other hand, if you started singing about using your mind and taking a step at a time (lyrics from the Blue’s Clues theme, for the uninitiated), I’d probably be really proud. I know, that doesn’t make any sense at all.

We had about a week of very un-February-like weather earlier this month, and it was so awesome to take you out to the playground and let you run wild. I am really looking forward to this summer, when we will be spending lots of time in our yard and on various outings. You really love being outdoors, and you’re old enough now to be safe and entertain yourself in our fenced yard. I have visions of lounging on our new deck, reading a novel and drinking something cold and tasty, while you frolic around the yard and tire yourself out. We’re both slathered in sunscreen in these visions, naturally. 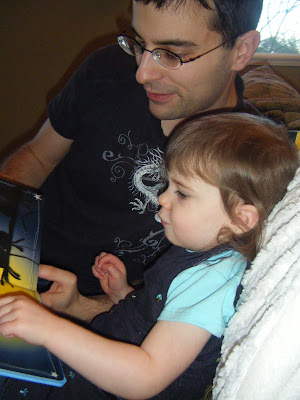 Well, I guess that’s it for this month’s newsletter, my girl. As always, your dad and I are really proud of you, and feel so lucky to be your parents. We love you so much and can’t wait to see what the next month will bring!

You can't avoid Dora... Claire says "Ola" all the time too and has never seen Dora (I don't think!) although she does have two books. At any rate, Dora is unavoidable since she's on EVERYTHING from toothbrushes to running shoes... kinda hate Dora.

The "do it myself" thing was cute right up until I was sitting in a parking lot waiting 15 minutes for her to get into the car seat... I've learned to start getting into the car 20 minutes sooner than should really be necessary! There are days where I consider slamming my head against the car door!