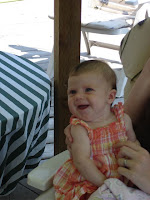 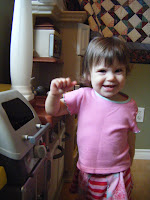 This time last year is when it started to get better. This time last year is when I was finally able to explain in clear terms that I was truly not exaggerating: that Gwen was either crying, sleeping, or nursing. That she spent her every waking moment physically attached to me or else screaming in anguish. I was finally able to understand that this was not normal. That other moms were actually able to eat meals while their babies were awake. That there was something going on that needed to be fixed, for both of our sakes. 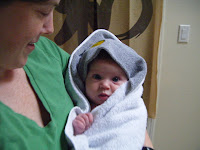 The answer was twofold: chiropractic treatments and mild antacid medication. We attended appointments with no fewer than six medical professionals before hitting on this combination - and that doesn't even count all the nurses I saw at the Health Unit while I struggled desperately to figure out the breastfeeding thing.

No, looking back over those posts, I never expressed how awful it all was. But as I read them, I remember how I felt. I remember the worry, the anxiety, the feelings of inadequacy, the frustration as the doctors all gave me conflicting advice and never seemed to listen to me anyway. The constant self-doubt and the endless discussions with Chris about what we should try next. But in a way, I don't think I even consciously said to myself, "This is awful." In a way, I didn't know it could be any different, any better.
She used to just scream and scream and scream. For hours. Whether we held her or not. Her entire body tense, her stomach hard as a rock. She was so skinny that people used to guess her age at about three months younger than she actually was, and then ask me if she was a preemie. After only a few chiropractic treatments, the screaming stopped. She suddenly turned into this amazing, happy baby, engaged with the world around her and excited to explore. After only a week on the antacid, she stopped vomiting up half her food, and started to plump up. Suddenly, we were a family, instead of caretakers of an angry demon. 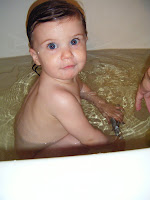 I sometimes feel ripped off by all this. My babymoon was stolen by Norovirus, and the weeks and months when I should have been marvelling over my daughter's perfect little fingers and toes, and figuring out how to be her mother, were swallowed up by all those doctor's appointments and hours of screaming. I hardly ever went out with Gwen when she was little, because I was too terrified of the screaming, the vomiting, the rage and anguish that little creature could produce. I don't have any pictures of Gwen snoozing in a carseat while her dad and I have a picnic, or play softball, or basically Get On With Our Lives the way so many new parents seem to. I was reflecting on the fact that when our friends' daughter Teagan was four months old (and I was pregnant with Gwen), we babysat her one morning a week while her parents took a class together. There is no way in hell I would have left Gwen with anyone when she was four months old. It was way too much to ask, and I would have felt miserable leaving her.
I want to take 2008-Laura aside and give her the biggest hug imaginable, and tell her that she's doing all the right things and that everything really truly will be okay. That in 2009 she'll have a daughter who says "Hi Mama," and blows her kisses. And that everything is about to get so much better. 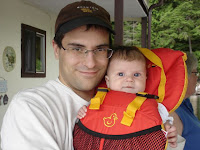 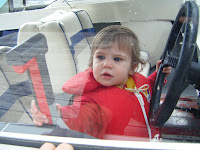 Posted by adequatemom at 2:32 PM