As promised, I took Gwen to the Farmer's Market yesterday after work. I was impressed! It was quite an event: there were tons of booths, loads of people, and even live entertainment. There were many dogs of all sizes for Gwen to pant and woof at, which she enjoyed. I kind of wish I'd brought my camera; next time I will, for sure. I *definitely* wish I'd brought the sling, because hauling around a 22-pound toddler while you peruse the farmers' wares is a helluva workout.

Anyway, I felt kind of ignorant, because it turns out that farm-fresh veggies look a little different from those you find at the supermarket. I *think* I saw celery, which was on my list, but I wasn't 100% sure it was actually celery and not some strange hippie vegetable I'd never heard of before, so I didn't buy it. (And no, I didn't ask, I was already feeling out-of-place enough with my office clothes among a swarm of flannel and hemp.) I did find a gigantic green onion that is probably the equivalent to an entire bunch at the store, and some eggs, and some peas. There was even a booth selling salad greens, which I'll have to purchase next time around.
Most astonishing of all, the good folks from Whippletree Junction were there selling fudge. When the friendly lady behind the counter asked if I'd like a free sample, well, I could hardly turn that down! I asked for something "peanut-buttery", and she gave me a lovely taste of Tiger Butter Fudge. It was completely scrumptious. There was one tiny, molecule-sized piece left on my thumb, which I offered to Gwen. I *really* wish I'd had the camera there for her reaction! She tentatively nibbled it, then wildly shook her head from side to side as if to say "What the HECK was that?!" It was hilarious.
It wasn't until about 10 minutes later that I realized "peanut-buttery" fudge has peanut butter in it, which is made from peanuts, and those are like a bigtime allergen and stuff, and while I have no particular reason to think Gwen would be allergic, it probably wasn't the best idea to try this little experiment at a public market without any kind of backup. Enh. She survived. It seems she is not allergic to peanuts. Hooray!
In case you are wondering (and I know you're not), this week's dinners have included 2 meals of Mr. Noodles, a can of chunky soup, and a box of Kraft Dinner. Wow, we are really doing a stellar job of exposing our kid to a wide variety of healthy and nutritious foods, aren't we? All I can say is, the days before my payday (which is tomorrow) are historically not the best eatin' days 'round these here parts. And it's been a very busy week. And other excuses as well.
To balance things out, here's a picture of Queen Gwen eating an apple. 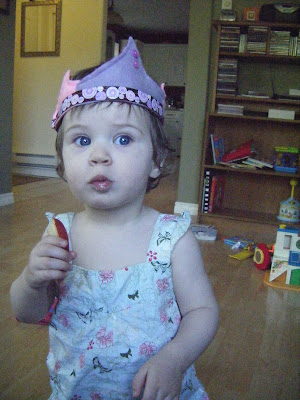 Posted by adequatemom at 9:13 PM

LOL. It is really great that you posted this, because it makes me feel that much more human for having "off" weeks with our son's diet too!

Um - the "giant" green onion, is probably a leek - not a green onion.

Can celery really look that different? LOL I used to go to the Farmer's Market all the time! Now I get farm fresh organic veg delivered to my door every week ... and my kid still eats only avacado, yogurt, cheese, crackers, bread, and fruit :D

Rhea - for SURE the green onion is not a leek, the woman selling it volunteered that it was a shallot. So I'm okay there!